BACK TO ALL NEWS
Currently reading: Caterham keen to make 'practical' sports car
UP NEXT
Hyundai i20 N targets Fiesta ST with 201bhp

Caterham will build a new front-engined, rear-wheel-drive, fully enclosed sports car to sell alongside its Seven model — if it can find a suitable brand as a project partner, the company’s boss has revealed.

The car is likely to be based around the abandoned but highly regarded C120 concept created with Renault-owned Alpine in 2014. Caterham’s boss, Graham MacDonald, indicated that there was a great sense of regret that this project never came to fruition and he said the company would have no hesitation in picking up the plans again in the right circumstances.

The British firm is looking to enter a more mainstream area of the car market with a new model — something it tried in the 1990s with the Caterham 21. MacDonald suggested such a car would have a more conventional shape than the Seven to broaden its appeal.

However, the core desire of the company is to maintain the much-praised Seven, so any fully enclosed model is likely to be an addition to the line-up, rather than a direct replacement for the Seven.

Caterham would use an engine from another manufacturer for its sports car, as it does for its current models which have Ford engines. However, MacDonald ruled out using Ford’s Ecoboost engines for such a project, saying Caterham wanted to use a naturally aspirated powerplant.

“The Seven is 60 years old next year,” he said. “While we love and cherish that, we have to think about the future. It’s important to get the right engine and product for our customers. It has to have Caterham DNA.

“We are talking to Ford and a number of other manufacturers. While the 620 is supercharged, we like naturally aspirated engines.”

As with the C120, Caterham would build the car in a joint venture with another manufacturer because it does not have the financial resources to fund such an undertaking on its own. It is currently in talks with interested parties.

Reports at the time suggested the production version of the C120 would cost around £35,000, but there’s no indication of how much a new sports car would cost.

“The best thing for Caterham now is probably a joint venture,” said MacDonald. “Any new product is a big investment for a small business like us. We’re more than happy to sit and talk to anyone.

“What we’re unlikely to do is just stick a roof and doors on a Seven. We want a bit more ease of access and more creature comforts inside.

“We’d love to have a full-bodied sports car, because when we take the Seven to some of the new emerging markets, they don’t recognise it as a car because of the way it looks.”

The C120 was being developed under a joint venture with Renault, but it failed to make production after Caterham lost funding two years into the project back in 2014.

Macdonald said the project would have taken an investment of €75 million (roughly £63m at today’s exchange rates) from both Caterham and Renault, but both parties reached only around €20m (£16.75m) each before the project was aborted. If Caterham were to find another partner to take up the C120, it would still need to find more than €50m (£42m) for its half of the deal to see the project through to production. 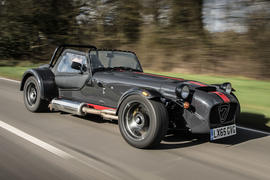 New 620S takes racing origins and tunes them for road use

Caterham’s new sports car would be rear-wheel drive and have its engine mounted in the front — unlike the C120, which was mid-engined. MacDonald said that was a compromiseagreed with Alpine, which was keen for the C120 to emulate Alpine sports cars of the past.

Renault and Caterham ended the joint venture on good terms and MacDonald remains open to the prospect of a partnership in the future. “It was amicable,” he said. “I would be more than happy to partake in a joint venture down the line if something suitable came up.

“Most definitely, it [the C120] could be revisited. We did a lot of research at the time. Renault was very good with the assistance we got. They had thousands of people in their technical centre. We’ve got an awful lot of data that we now own. Renault agreed that if we needed to, we could go back to them and request to supply parts. We were keen when we parted to revisit it. Will we? I would love to think so but, as it stands, it’s not on the plans.

“We are actively thinking about what is the next step to the Seven. We have a number of ideas involving a number of other businesses. As yet, nothing is near conclusion, but certainly we would like another product to follow on from it.”

It look interesting. The

29 December 2016
It look interesting. The picture the car look like the Aston Martin V8 Vantage. Caterham. It will suit our famous Simon Templer if has 4 seater instead of Volvo.

29 December 2016
"An Autocar image previews what a fully-enclosed Caterham could look like", someone just drew it, that's not a picture from caterham.

they've started and abandoned so many things that i've stopped listening. aeroseven didn't get beyond a concept, alpine got abandoned, motorbikes haven't materialised, "caterham technology and innovation" was wound up in 2014 and caterham composites appears to have quietly disappeared too. that butted-tube reynolds chassis isn't on the options lists yet either.

how's about just a proper roof and doors for the seven? or an aluminium bonded chassis? or a major retune (twin turbo?) of the 160 to 100bhp+?

29 December 2016
The Autocar image looks pretty much like all the other performance coupes out there.

How about keeping more of a modernised 7 flavour, including the recognisable grille and a tubular bonnet line.

Nice if they got a designer in to update the '7' though.

29 December 2016
Stick to what you're good at, please. A small company like Caterham will never be big enough to compete against mainstream rivals, you've failed before and will fail again if you try

29 December 2016
This was the kind of thing that used to kill small specialists, but I can't help but wonder if an alternative approach is now possible that would support something like this and make it workable for both the customer and the manufacturer. If Caterham gets is platform (chassis, running gear and engines) right then with the advent of 3D printing and other easier to produce materials other than fibreglass then one platform with a variety of different body and engine types would be entirely possible and quite cost effective to manufacture. There is also the possibility of establishing old fashioned coach building and trimming partnerships with third parties so that customers can get the exact custom finish they want. It would certainly give Caterham reach into sectors of the market it currently doesn't reach while still enabling the 7 in all its forms to remain the purist's car of choice.

There is one option

29 December 2016
Just maybe, Caterham could repeat history and buy the Elise rights when Lotus finally decide to build a new one. It might just work with Lotus needing the cash and Caterham needing a car that works, something a little more practical than a 7 and presumably meeting Type approval. Otherwise they should just forget the idea.

Just maybe, Caterham could repeat history and buy the Elise rights when Lotus finally decide to build a new one. It might just work with Lotus needing the cash and Caterham needing a car that works, something a little more practical than a 7 and presumably meeting Type approval. Otherwise they should just forget the idea.

I've been thinking this for about ten years. However, Lotus keep on refreshing the Elise themselves so doubt they will ever get to a point where they discard it and develop a new one.

I would have thought that

29 December 2016
I would have thought that something along the lines of the original Lotus Elan could be the way to go. A small car that is affordable and easy to maintain and possibly in kit form too.

Exactly how much did Lego pay

29 December 2016
Exactly how much did Lego pay them for that little model?!