BACK TO ALL NEWS
Currently reading: BMW M5 vs Alpina B5: 5 Series super saloon showdown
UP NEXT
New Touring Arese RH95: Coachbuilt supercar driven in UK

Alpina has always kept a respectful distance from the products of BMW’s M division, despite a relationship with BMW that is far closer than most imagine and involves far more than knocking out 1700 factory-approved cars every year.

Alpina exists within the very fabric of BMW, with an entire other side to the business dedicated to developing the manufacturer’s own products on projects as diverse as the suspension for the 2 Series Active Tourer and the powertrain of the Dakar Mini. Remember the thundering V8 in the old BMW X5 4.8iS (and, indeed, the brand new Morgan Plus 8)? We have Alpina to thank for its existence.

But you only need to look at the spec box to know that with its new B5, Alpina is no longer feeling so coy about treading on the toes of its in-house rival. Indeed, so close is it to the new M5 in almost every regard, it appears to be something closer to a kick in the shins. While wearing steel-capped boots. 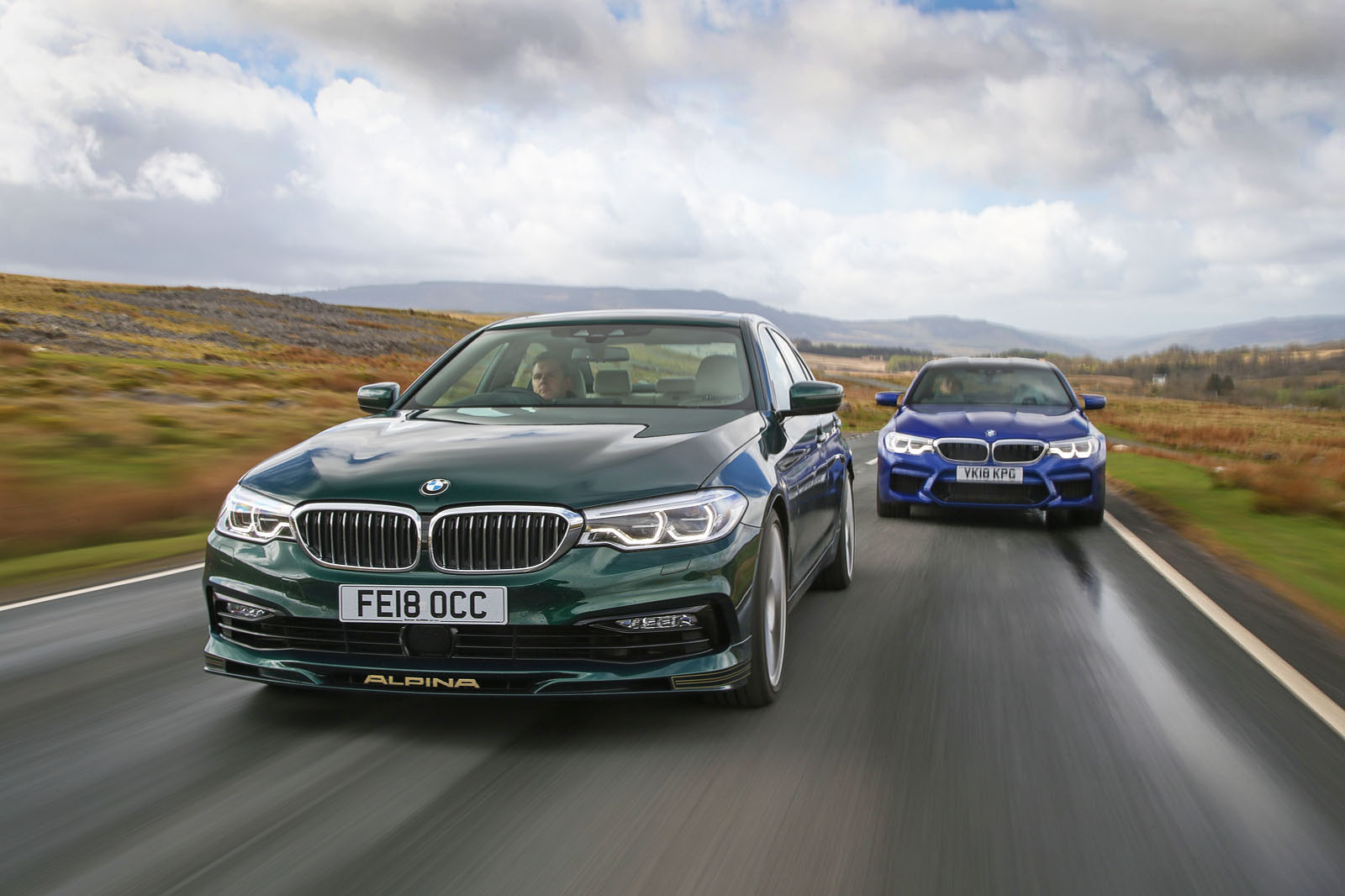 However, does it not seem inherently implausible that this new B5 will have what it takes to hobble BMW’s masterly new M5? Alpina is so small that it will make fewer than 500 B5s over the next year of which just 18 have been allocated to the UK. Of those 18 at least 10 will be estates, which means no more than eight of these B5 saloons will be sold here in the next 12 months. Mastery of the mighty M seems something of an ask.

Except that on the way to our Welsh rendezvous, it felt like it just might be possible. I have long been a fan of the considered and understated Alpina approach – but accepted too that thrill-seekers would always and understandably have their heads more readily turned by the output of BMW’s M division. But this one felt different. At times the engine it has created for itself – similar to but by no means the same as the almost identically powerful M5 unit – barely feels turbocharged at all, so seamlessly does it deliver its punch across such a wide rev range. Were it not for its cultured but quiet soundtrack, this could a seven-litre naturally aspirated engine.

But even at its best, it serves mainly as facilitator and factotum for a chassis that picks up the already outstanding characteristics inherent within its 5 Series underpinnings, and sprints into the distance. So despite the liquorice-thin sidewalls of its tyres and the monster footprints they support, the B5 offers an implausibly sumptuous ride, better by far than, say, that of the previous-generation 7 Series limo. Together with the seamless transition of power available from the eight-speed ZF transmission, the B5 presents just about the most sophisticated super-saloon ever to head to the hills. 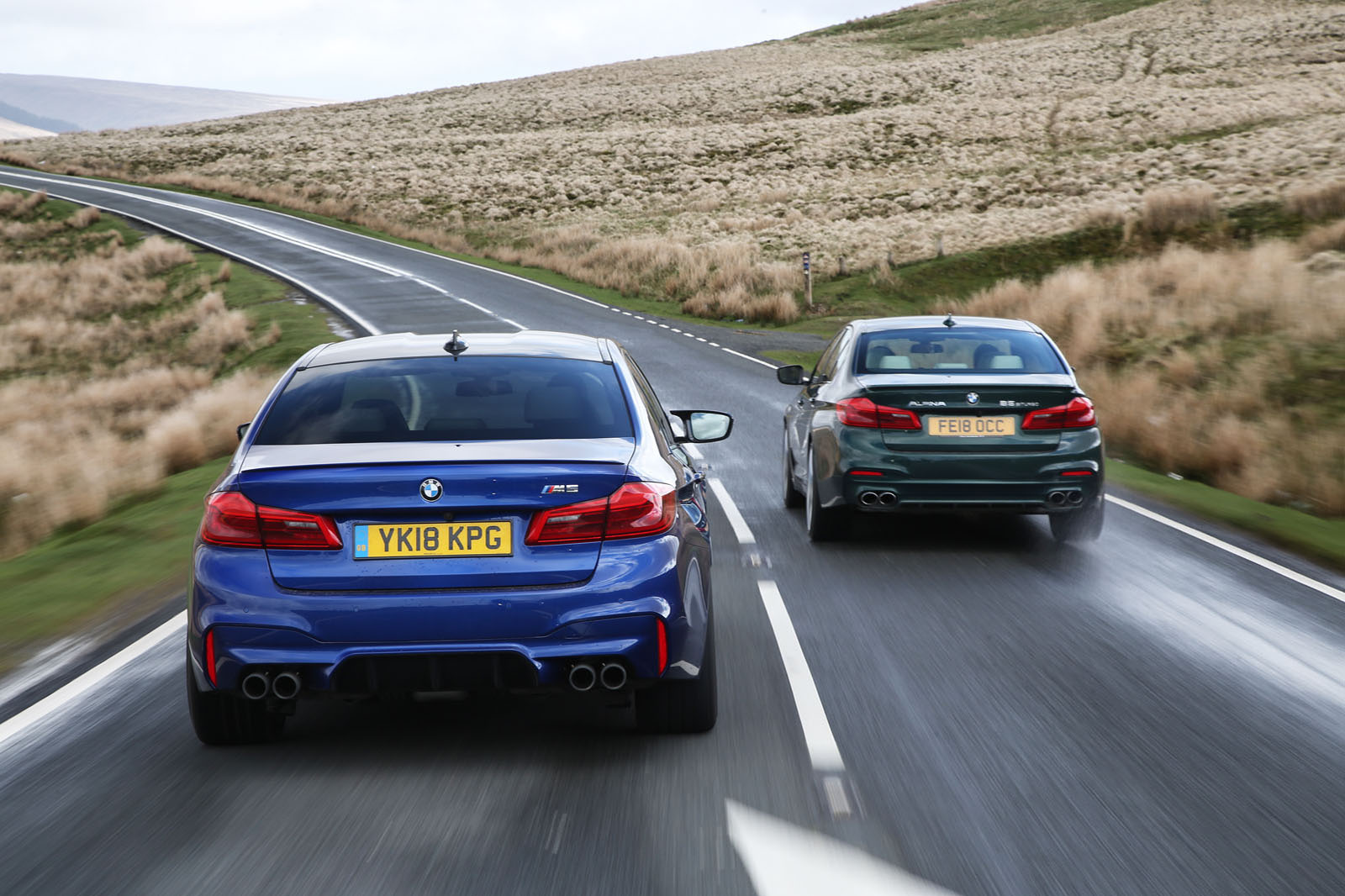 Which is where it finds the M5 lying in wait for it. And even on first acquaintance, it looks like the Alpina upstart is going to get mugged.

BMW has done a pretty well-judged job in pumping up the appearance of the M5 without making it look like a hot-rod. It’s only when you park it next to a car as subtle as the B5 and see that jutting jaw and beefy side skirts that it starts to look slightly steroidal.

It’s an impression the interior makes no attempt to dispel. While the Alpina cabin is clearly that of a 5 Series reclothed in exquisite upholstery that doesn’t sit quite as comfortably with its electric blue dials as you might hope, the M5 cockpit is a breed apart. Instead of discreetly concealing its many set-up functions in electronic sub-menus like the B5, the M5 not only has many more, it puts them front and centre. 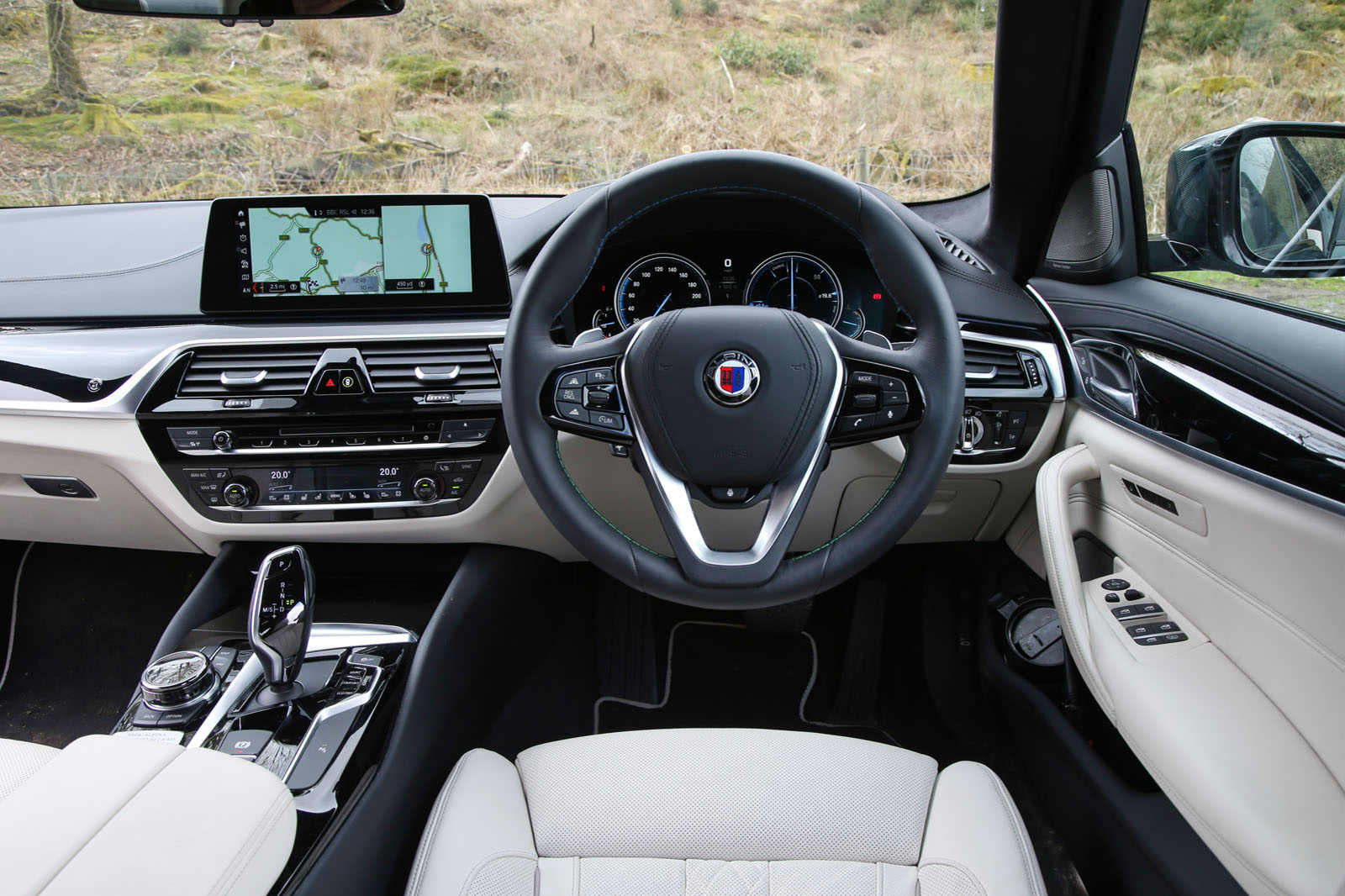 There are individual buttons that control mapping for the steering, suspension and powertrain, a selector that allows you to choose how aggressively the M5 changes gear and, of course, two red ‘M’ buttons on the steering wheel that allow fast-track access to your tailored set-up options. And while a part of me thinks the approach is, as Jeeves might say, a trifle sudden, a rather larger, unreconstructed chunk of me finds it all frightfully exciting and makes me want to go driving right away. And good though the Alpina’s cabin is, it never quite does that.

So you climb aboard the M5, aim it up the road and invite it to do its thing. The next thing that happens is that the thunderous reply from the V8 is joined by a new and alien sound that appears to be emanating from you. It largely takes the form of expletives. Now, I have no idea why this should be, given that both cars are so close in power, torque, weight, share the same gearbox and have all but identical acceleration figures, but I can report only as I find.

While the B5 can make you feel like you’ve been flung from a catapult, the M5 experience is closer to that of an artillery shell’s. On a dry, smooth, straight road, its tyres momentarily break traction before the electronics chime in even if you leave it in four- wheel drive. And then you’re off, bellowing your way towards the horizon. It is utterly thrilling, not least because the engine is so much louder, deeper in voice and sharper-edged too. 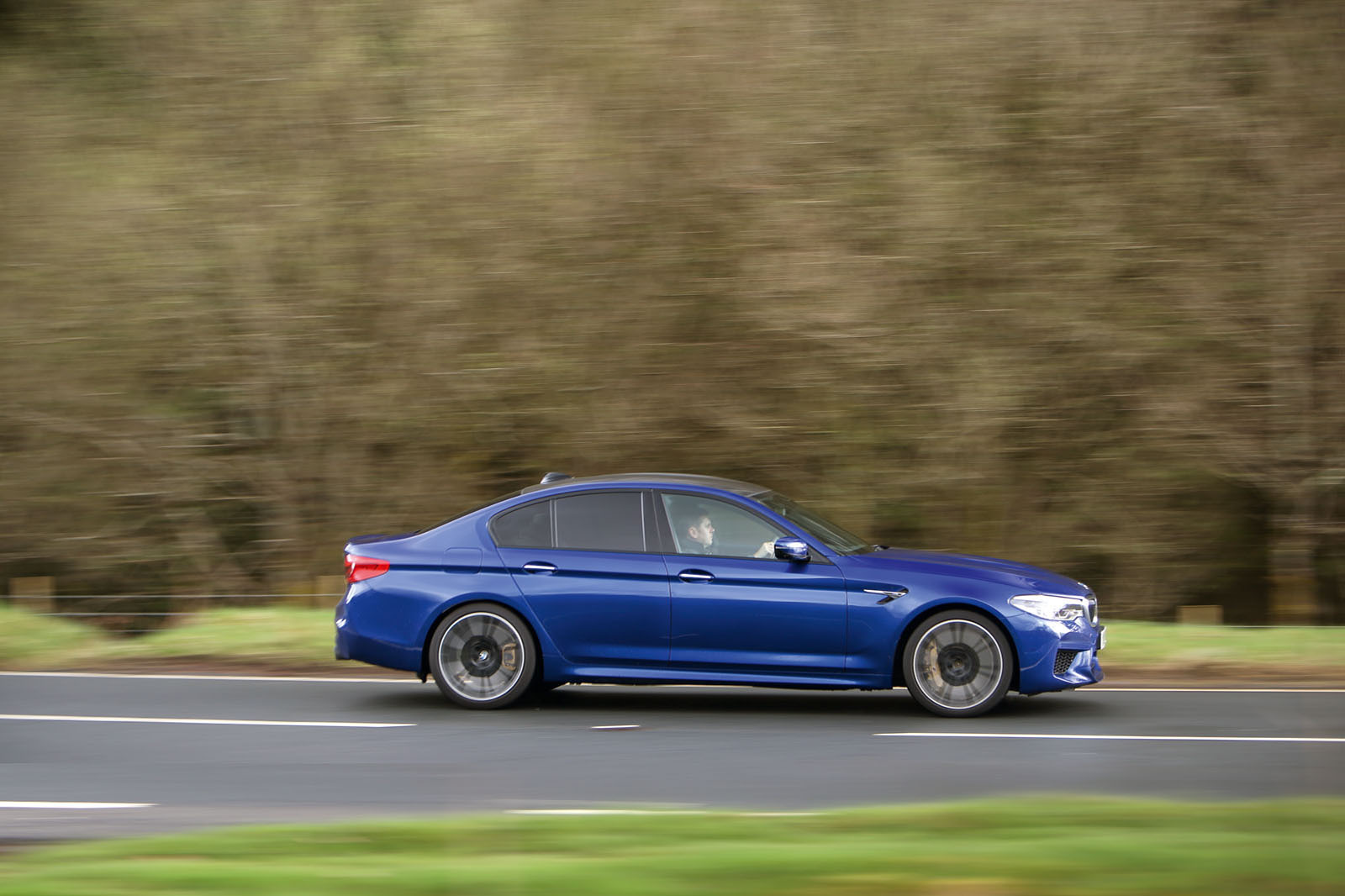 And that’s not the only reason it’s quicker than the Alpina from one place to the next. With tyres two sections wider than the B5’s at the front and one section narrower at the rear, the clear intent here is that the M5 should resist understeer like no other two-tonne tank in history; and it does. Aided by pretty aggressive off-centre steering response, the M5 has an insatiable appetite for apices and, once the nose is in, you can trust its iron body control to ensure the rest will duly follow. Where you guide the Alpina along a great mountain road, you fire the M5 at it because that is the way it insists on being driven.

Game over for Alpina, then? By no means. The M5’s approach is not without its drawbacks and you don’t need long in the Alpina to appreciate it. For all its extra speed, the M5 is not as relaxing a car to drive fast and you might not think that matters too much. To me it does: a car relaxes you when being driven rapidly because it gives you confidence, and a car that gives the driver confidence is, by my definition at least, a fine handling car.

And in three distinct ways, the B5 inspires more confidence than the M5: specifically its steering is more linear, better weighted and, crucially, has more feel. Doubtless it will understeer more and I’m sure that ultimately the M5 has more body control but, on even the quietest public roads, for nearly all people nearly all of the time and in the context of two-tonne saloon cars, the fact that the B5 feels more natural, predictable and reassuring counts for more. It has better brake feel than the M5 on its optional ceramic rotors too. 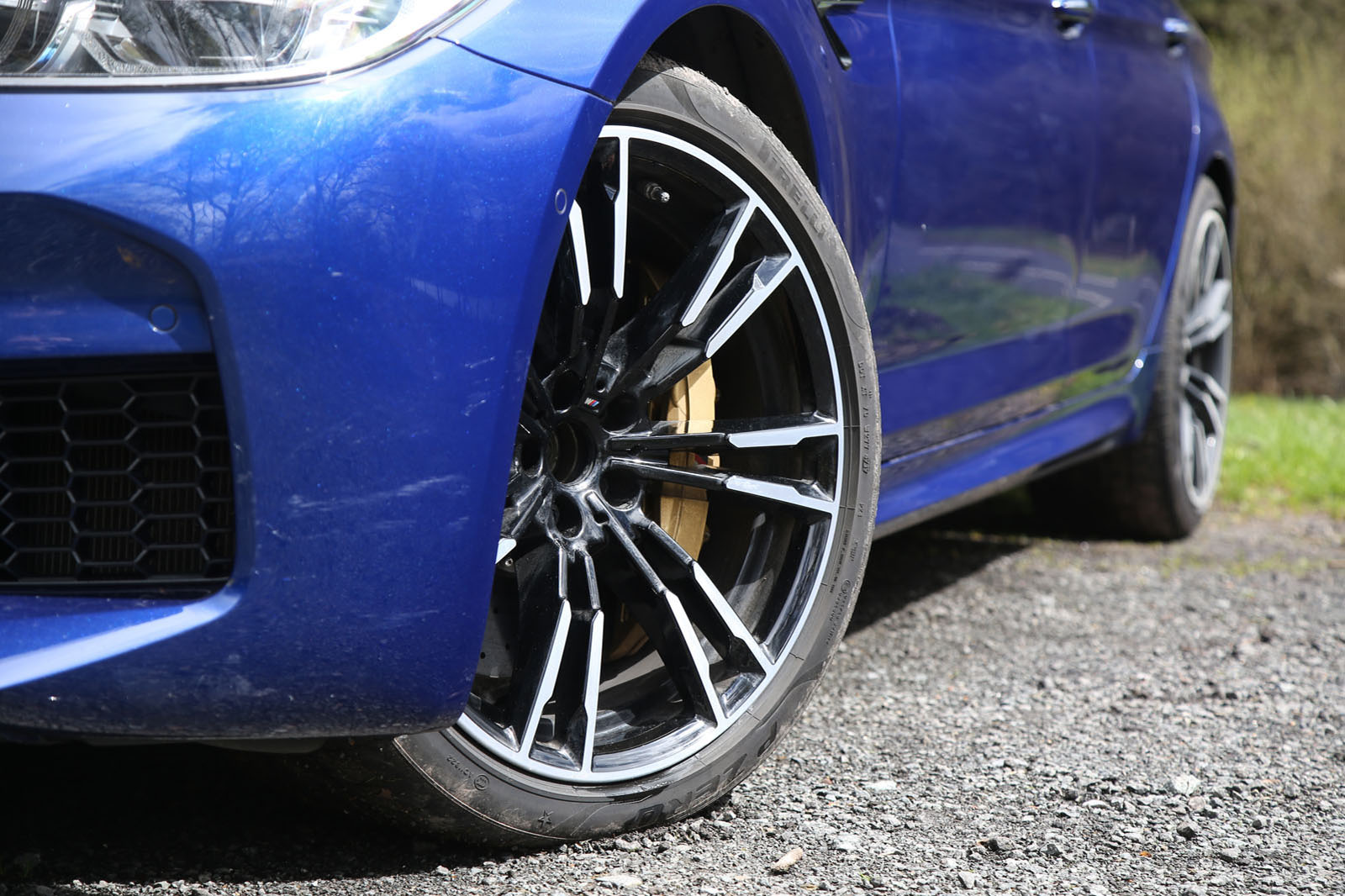 But what’s so fascinating about this contest is that having seen the Alpina banging tent pegs into pristine M5 turf, the M5 turns around and repays the compliment in kind. Set everything to its least hyperactive mode, go for a long lollop of the kind for which the B5 exists and you’ll find the M5 does an outstanding impression of a luxury saloon. Its ride is close enough to B5’s that I’m sure some would actually prefer its slightly more controlled gait and, while you can never quite escape the presence of the mighty V8, there will be plenty who will consider the car none the worse for that, myself included.

Which is why it is so devilishly hard to choose a winner. I never much liked the previous M5, which was just not a very pleasant car to drive quickly, but this one is improved in every way that matters to me, the least important being the fact that it is faster. What BMW has achieved here is to make the M5 exciting again in a way it has not been since the demise of the gloriously unhinged V10 E60 M5 eight years ago, yet it has done so while also creating a car so usable it recalls the spirit of the E34 M5 of the early 1990s. It really is a superb car.

But the Alpina is more rounded still, an exquisitely judged car of quite stunning deftness whose appeal, while perhaps less obvious than that of the M5, is no less compelling for that. The essential choice, then, is this: do you go for the car that is more exciting or more satisfying? 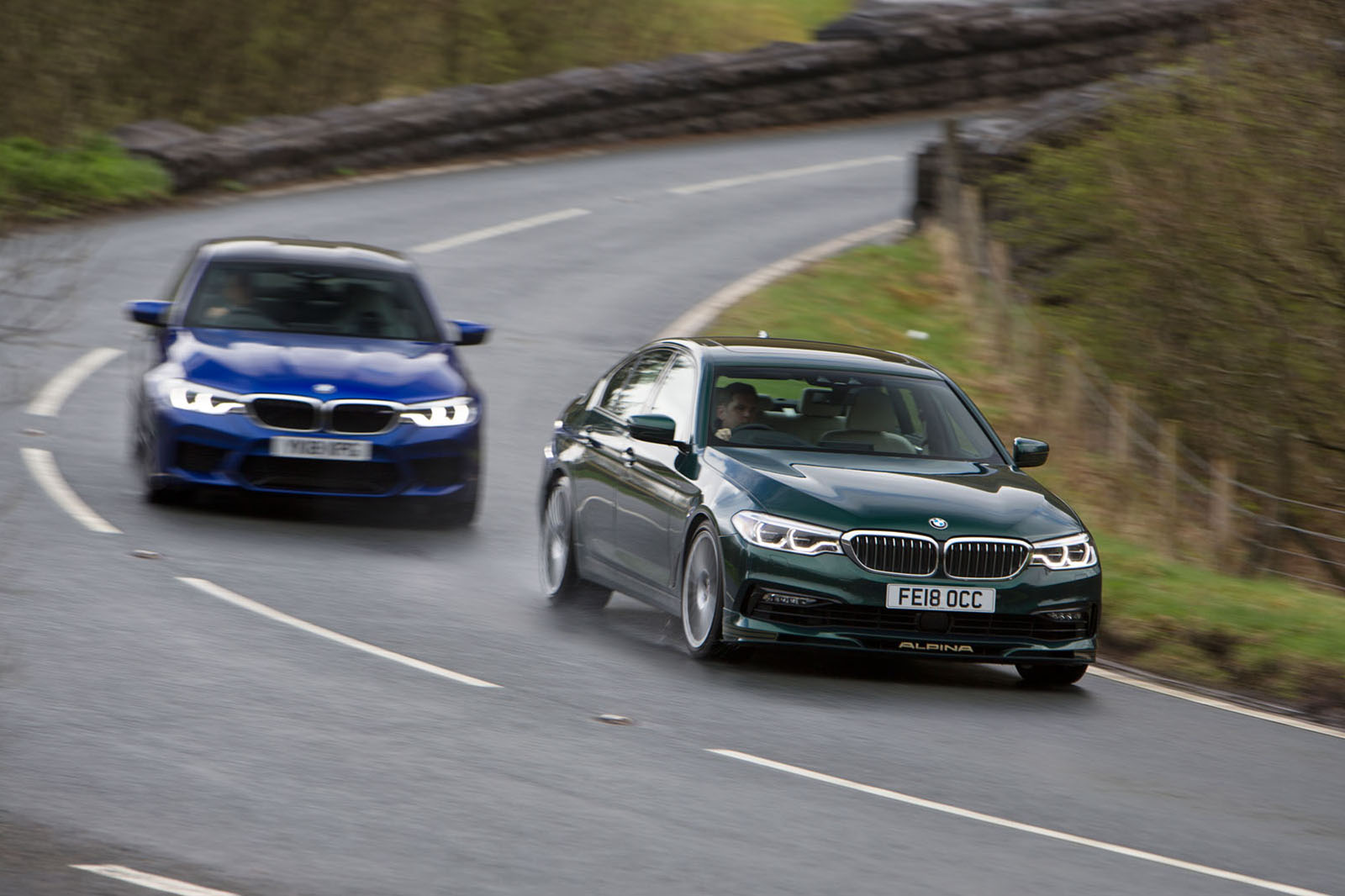 Were this a sports car comparison, there would a strong case to give the nod to the M5. But these are cars in which people do huge distances, very few of them on roads such as these. So even if you say the M5’s flaws are cancelled by its stronger performance and call it a draw on the open road, the rest of the time the Alpina just has the edge. As good to drive and an even easier car with which to live, it is the B5 that is our winner.

1st: Alpina B5 - If you ever wondered if Alpina could make a car to out-M an M, the answer is before you. Albeit only just, that answer is yes

2nd: BMW M5 - A car of real character and triumphant return to form for the M5, but here up against a car of dazzling completeness and appeal

OUR FAVOURITE 5-BASED ALPINA USED BUYS A rare beast with that classic BMW shark nose and a 261bhp version of the M30 straight six. Find one with the classic Alpina stripes and few cars ooze early 1980s chic better. This was at launch the world’s fastest four-door saloon. Those two turbos are a weak point, though, so do your research, and be prepared for high running and repair costs. 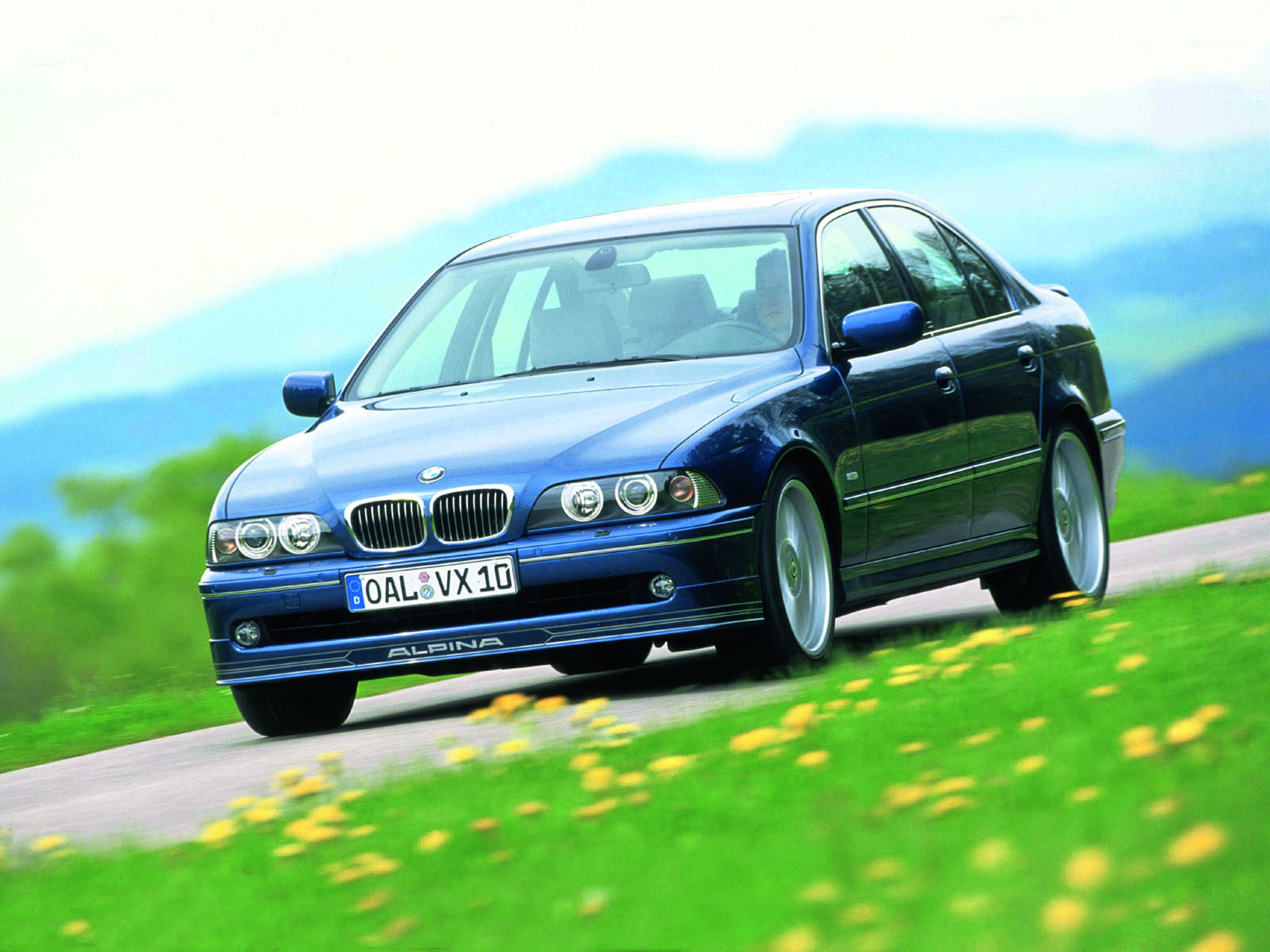 While blisteringly fast, the V8 S’s emphasis was on luxury, with a leather-swathed interior putting the E39 M5’s to shame. Feels a tad undervalued, so a good buy now.

As an aside, have you ever published a separate article on the great Welsh roads?

(pedantic point - it is which one is better. Best of 3 or more)

To tell us that these two cars have four wheel drive systems. And the roads shown are winding and wet? Seems a ridiculous ommison. Testers are getting very lazy these last years.

Would seriously consider a B5 Touring - immense power and capability, rarity and styling that's subtle enough not to shout its desirability to anyone other than the automotive congnescenti.
View all comments (8)