One of the last motoring taboos has been broken: you can now buy a diesel-powered Bentley. We head off the beaten track to find out what it's like
Open gallery
Close

WO Bentley remains a much misunderstood man. He liked trains as much as cars, was a pretty hopeless businessman and never set out to build the world’s fastest cars. Speed was always in the formula, but only part thereof.

Back in 1919, when his first engine burst into life on a bench in London’s New Street Mews (much to the annoyance of a nurse tending a dying man next door), his stated vision was merely to build “a fast car, a good car, the best in its class”.

Bentley was so unwedded to the idea of making the quickest thing on four wheels that he deliberately made his cars far heavier than they needed to be – inspiring Ettore Bugatti’s well-known, unkind but not inaccurate “world’s fastest lorry” jibe – and less technologically advanced than was possible, even at the time. He was, for instance, a great admirer of Peugeot’s 1914 twin-cam W grand prix engine but eschewed the layout because it didn’t provide the mechanical refinement he sought. He wanted speed, but not at any price.

His vision was one of effortless progress in an indestructible car. He was proud he could drive his Bentley through France from coast to coast in a single day without needing the lights and, years before anyone dreamt of an autoroute, rightly so. When one of his cars won Le Mans in 1929 for the third consecutive time, the engine strip-down report simply read: “Nothing to report.” These were massively engineered cars – overengineered, in fact. Versatile, too: one chassis off the line could win Le Mans; the next could be turned into a hearse. And at least one was.

Read our review of the Bentley Bentayga Diesel here

So as the Bentayga Diesel gently eased into the river and started confidently paddling upstream, I imagined the great man sitting in the back, a small smile turning into a broad grin as its engine note didn’t waver as the waters drew deeper. Anything that extended the use of a Bentley and allowed its occupants to enjoy travelling in one would have been a good thing to him. 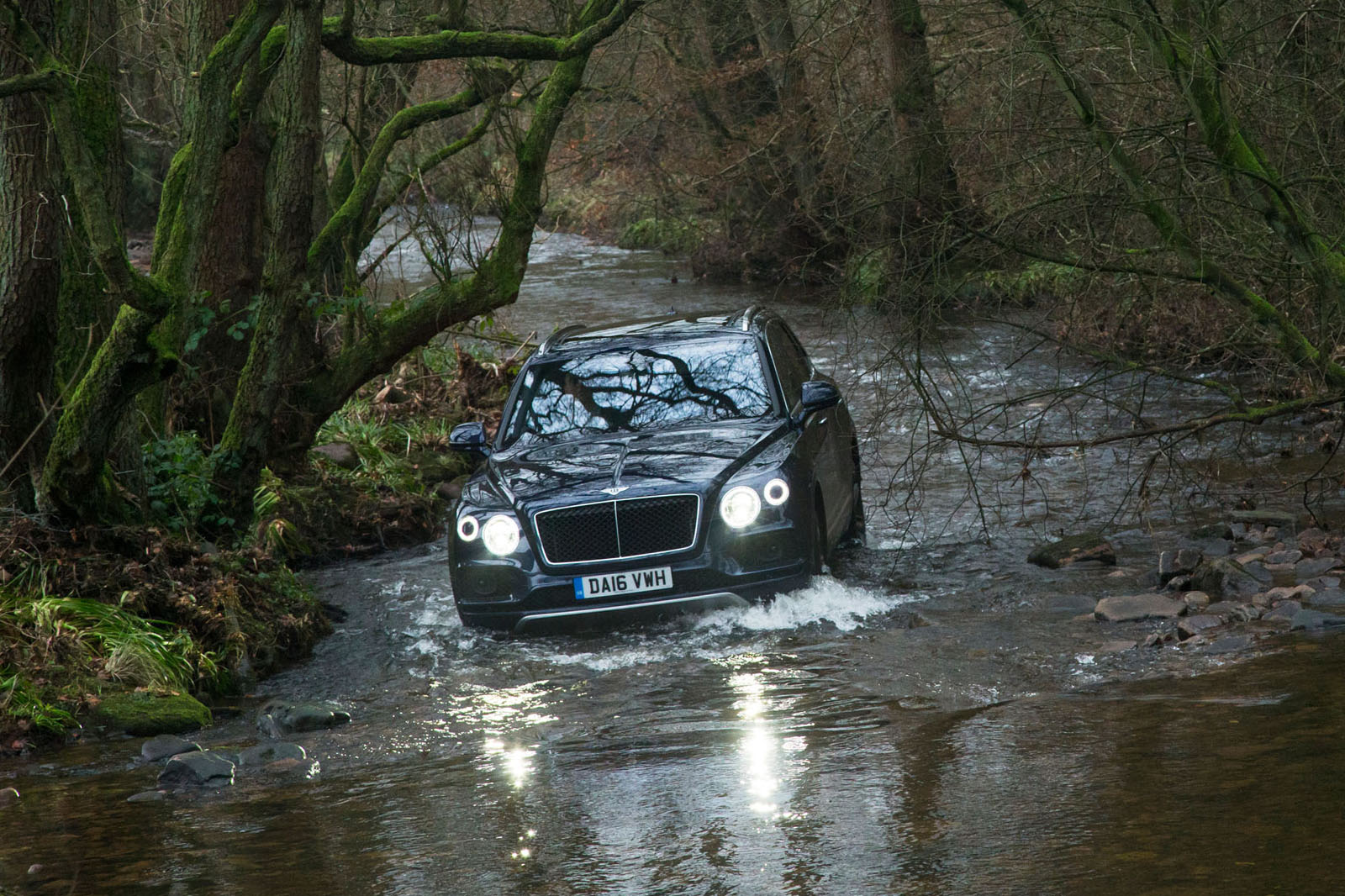 Even a Bentley with an Audideveloped diesel engine? Well, Bentley didn’t like other people’s engines and blamed – in part, at least – the 1931 collapse of his company on the imposition of just such an engine (a Ricardo-designed 4.0-litre straight six) in a Bentley against his will. But the truth is that the company was already past saving, the Ricardo engine a symptom of Bentley’s troubles, not the cause. So I think he’d have been very sniffy about the Audi involvement, right up to the moment he drove it.

To me, the only surprise is that it has taken so long for Crewe to get around to doing a diesel Bentley. Bentleys have never been about power or the high-rev histrionics required to extract it from modern petrol engines. The only measures that matter in a Bentley are maximum torque and the revs required to access it. And, if you can believe it, its new engine makes 663lb ft of the stuff at an inaudible 1000rpm. That’s the same torque at fewer revs from 4.0 litres and eight cylinders than the flagship petrol Bentayga manages on 6.0 and 12.

To a Bentley, diesel brings thrust, refinement and range, and although I’m unaware of any engineering wish list WO might have created, had he done so, you can be pretty sure these three would have been in the top five.

It also makes the Bentayga better off road. I know no owner is going to go green-laning in their Bentayga, but they will all want to know that it can. And given the opportunity to do so in someone else’s, you would. 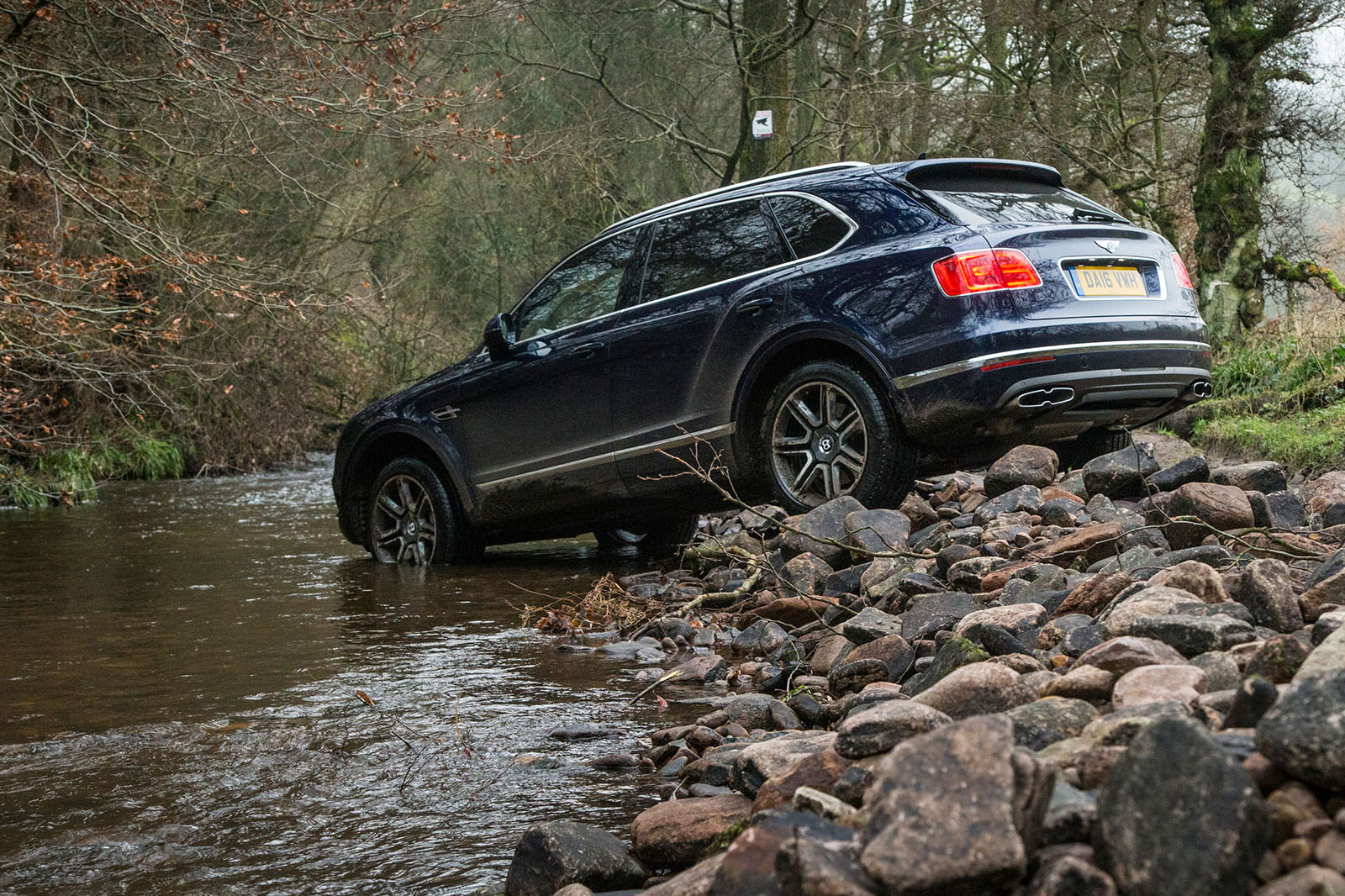 So I did. There is a magnificent incongruity about driving up a river in a Bentley, or wading axle deep through mud on a forest track. It’s like winning Le Mans in a Jeep. There’s a sense of the surreal, of real naughtiness that adds materially to the enjoyment, even before you realise it’s going places and doing things that would give the finest conventional SUVs pause for thought.

What the diesel brings to this environment is an ability to mete out torque with such precision that you can climb over rocks almost tread block by tread block. With an electric compressor working with sequential turbocharging to provide naturally aspirated throttle response, there has probably never been an easier car to drive slowly. Which is an odd string to the Bentley bow, I grant, but an undeniably useful one.

This talent transfers usefully to the public road, too. The Bentayga Diesel has eight gears but, in fact, needs hardly any of them. I find it ironic that gearboxes were first used in cars specifically to address deficiencies in the internal combustion engine’s ability to produce torque, and yet the greater the torque produced and the wider the band across which it is produced these days, the more car makers seem obsessed with throwing more and more gears at them. The most elegant engineering solution would be a car with no gearbox at all, one with so much torque at all engine speeds that it can simply drive the wheels directly itself. At times, the Bentayga Diesel feels like that car.

Indeed, it reverses the conventional wisdom that says you put the gearbox in Drive to relax and Manual when you want to get busy. In Drive, the Bentayga feels the need to hunt around its gears in its ceaseless quest for the optimum ratio, whereas in Manual, you just let the engine shoulder the burden. In something like fourth, it will accelerate from a crawl to a probably unspeakable and certainly unpublishable velocity in one sweeping, majestic motion. It’s not just highly satisfying; it is also very, very Bentley. 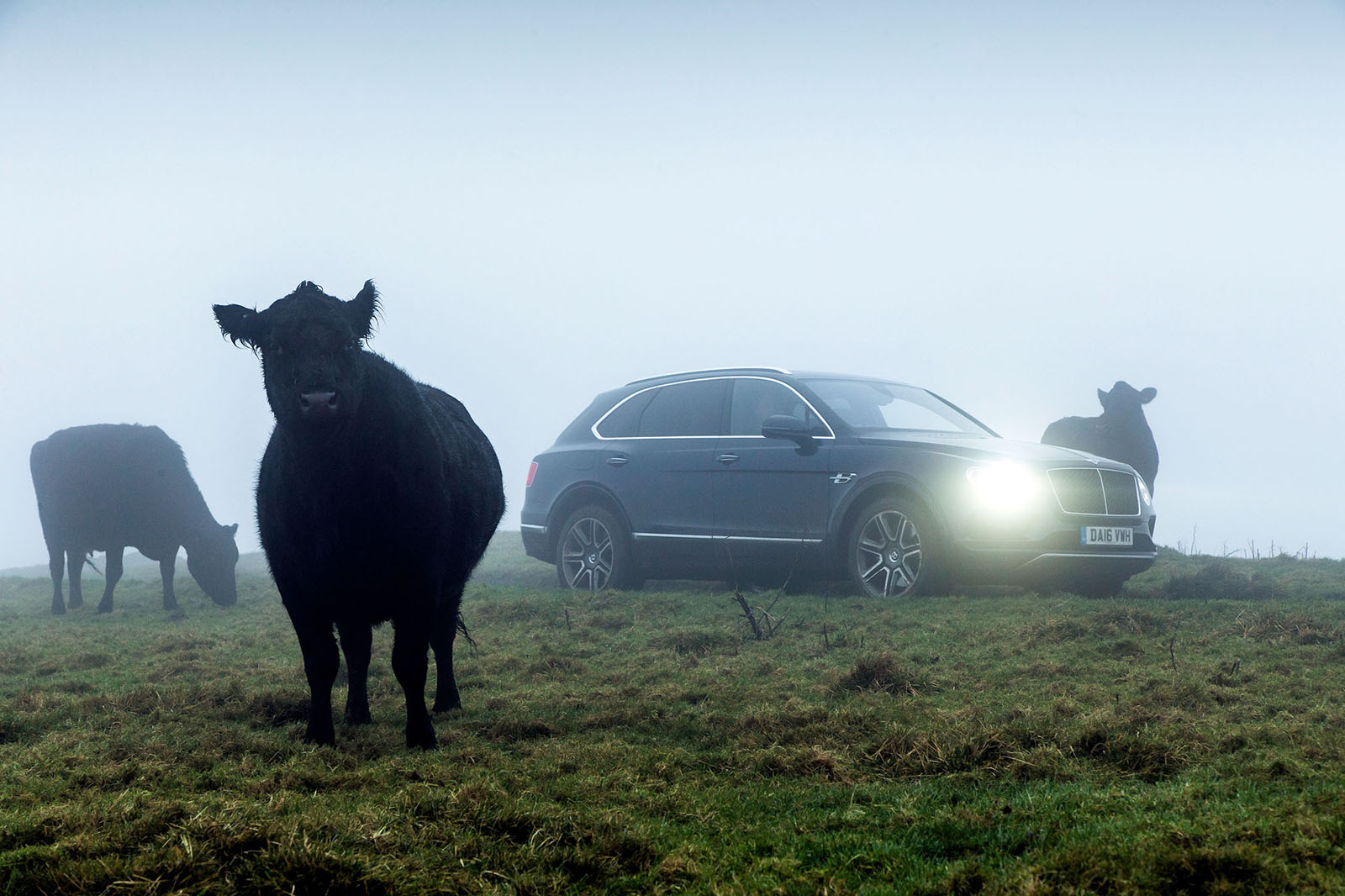 So what’s not Bentley about it? That’s the question for those who are unsure about the idea of a dieselpowered Bentley SUV and those who feel the Bentayga is already a step too far and black-pump refuelling simply beyond the pale.

I still struggle with the Bentayga’s name and I now know I’ll never like its looks, but neither of these has anything to do with its configuration or power source. It’s heavy, but even Signor Bugatti recognised that characteristic as inherent in Bentley design. It’s high off the ground, but who’d not want a Bentley to have an imperious driving position? And it is effortless, versatile, beautifully built, comfortable, fabulously refined and the first Bentley ever made that will put more than 500 miles behind its wheels between refills. Put in the fortunate position of being able to choose between the two, I’d have it even over its more expensive petrol stablemate and its dozen cylinders.

Nearly 100 years ago, WO Bentley set out to build “a fast car, a good car, the best in its class”, and if I look across Bentley’s ranges, from the Continental GT and the Flying Spur at one end to the Mulsanne at the other, I know the one that best fits this bill, and you’re looking at it.

The Bentayga Diesel may not be the most charming Bentley built since Volkswagen took over, but assessed in terms of achieving the job it was designed to do, it is clearly the best. More than that could not have been reasonably hoped.

No. From the perspective of someone who for a time was forced by company policy to have a Mercedes-Benz CLS350CDi. A modern diesel "at this end of the market". At least the engine is as it is used in the S-Class. After 3 months my verdict - noisy, rough, lacking in power, nose heavy, filthy and dirty. The car cost £68500 with silly options. It handled like a pig on roller skates and blew out clouds of black smoke under acceleration. There is no fundamental difference between a V6 Mercedes-Benz diesel from 2014 and the filthy lump in this Bentley. Both are basically nasty. Fuel consumption was never better than 40mpg because I never needed to drive more than 50 or so miles a day in it. The car was mis-sold as are most diesels to consumers (in this case a company) who never do the 20000+ miles a year where it could just about make sense. Told the fleet manager to take it back and bought a BMW 528i. Quicker, quieter, cleaner, smoother. Economy- 35mpg. Next car -BMW 530e PHEV. The future is here. It is petrol/electric or pure electric. Diesel has no future.
jamesf1 13 February 2017

love all the defending from people who have a diesel

but its still pointless, and will be got rid off soon enough. The great CO2 focused diesel is better fantasy is over.
Cobnapint 12 February 2017

Are you judging diesels from the perspective of a 2005 Mondeo or what.

Modern diesels at the top end of the market like this are smooth, torquey and don't shove clouds of smoke out the back like they used to back in the day.

You say diesel is dangerous - well don't go breathing in the fumes next time you fill up with unleaded will you. The new found darling of the forecourts contains lots of lovely carcinogens, all waiting to get into your bloodstream, namely dimethylbenzene, mesitylene, toluene, xylene and benzene.

Ok, most of it gets burnt off by the cat, but only when it's up to temperature.