BACK TO ALL NEWS
Currently reading: Audi SQ5 sales suspended amid WLTP changes
UP NEXT
New Audi S3 Sportback and Saloon arrive with 306bhp

Official line is that sports SUV’s build slots are all taken, but WLTP tests could be an influence
Share
Close
Share story

Audi has suspended sales for its SQ5 sports SUV due to what it claims is a full build slot run, although sources suggest upcoming new emissions limits are to blame.

Buyers wanting a new SQ5 can currently only purchase one that’s already in stock, with no date set for when new specification models can be ordered.

“Audi UK has filled all the available SQ5 production slots in its 2018 model year allocation and only a limited number of cars remain in Audi centre stock,” said a company spokesman. “Customers looking to place an order can contact their local Audi centre for the latest inventory information.”

However, a source told Autocar that the SQ5, which is a hot version of the Q5 SUV, has been pulled from production because Audi is preparing the car to conform to the stricter Worldwide Harmonised Light Vehicles Test Procedure (WLTP), which comes into force from 1 September.

All new cars delivered after that date will need to conform to the WLTP’s emissions limits, which are considered to be tougher than the outgoing lab-based New European Driving Cycle test because the new procedure measures exhaust emissions during real-world driving.

The changes mean that any car set for a September delivery date – even one ordered months before that – would have to comply with the new rules. Our source suggested that the SQ5 may be among a likely large number of cars from multiple manufacturers that are being suspended from showrooms until they have been adjusted to WLTP standards. BMW has previously admitted to Autocar that it will be doing this with the M4.

Audi builds its Q5 models in Mexico, meaning delivery times to the UK can take several weeks. This will make it more difficult for Audi UK to gauge what volume of cars can be kept here in stock without risking some of them not being sold before 1 September.

That said, manufacturers might be granted a buffer to help them from having to, in effect, scrap unsold pre-WLTP cars. Autocar understands that the Department for Transport will allow manufacturers to have a stock of 10% of their annual sales after the 1 September deadline, thereby granting them the right to sell cars of pre-WLTP standards following its introduction.

The DfT wouldn't comment on the claims for a buffer, although a spokesman did admit that a consultation had taken place regarding the issue and more information will be revealed in due course. 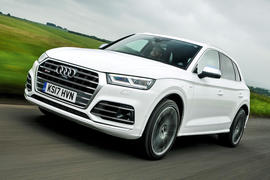 It could also be because they

It could also be because they may be imminently releasing the diesel version ?

The BMW X3 I ordered in November is currently held in ‘quarantine’ along with all other petrol versions until new exhaust systems have been fitted to comply with WLTP. Not just an Audi issue.

The BMW X3 I ordered in November is currently held in ‘quarantine’ along with all other petrol versions until new exhaust systems have been fitted to comply with WLTP. Not just an Audi issue.

6 Months waiting for a new car, and not a particularly rare one is taking the piss.

My 318i sport was scheduled for delivery today but was cancelled due to "final environmental quality checks" .i cannot get any further information (company car through Lex). Anyone got more info on what's happening?

Yes I think there is Sunami running crashing towards Car makers and in a way they are not to blame, maybe the year on year strangulation of exhaust fumes was to stringent and in a quick fix things were er em fudged to comply.....?

Not the only Audi

Try to configure an S3 and you get "S3 is now subject to availability. Please speak to your local Audi Centre for pricing and stock availability matching your requirements".

Yet again the issue is German cars and emissions. Which again also shows that the engineering and technical ability of Audi, BMW, Mercedes, Porsche and VW is poor as they keep falling foul of emissions regulations and tests ever since dieseglate took hold. And then, in VW’s case, it was a result of cheating to cover up their rubbish engines. Yet again, all this reason enough to avoid German care.

It could be that Audi are going to replace the current 3.0 litre with the new 2.9 twin engine, which was developed by Audi and Porsche. Audi has used this engine in the new Audi RS5.

I notice that no-one has raised the question;If my car meets these new regulations, what happens if I fail to maintain the car at the level it should be, will it still meet the regulations in 5 years time? Again it is another knee jerk reaction by government to try and eleviate a problem,which technology will and can fix given the space to do it.It reminds me of the Oliver and Hardie comment,"look at the fine mess you've got us into now Ollie"

Haven't Audi only got

7 April 2018
Haven't Audi only got themselves to blame, the new regulations were at least partially brought in because VW (the most famous, but other manufacturers aswell) thought they could cheat the previous regulations.