The RS2 Avant put the room into vroom in the 1990s and now its stablemate, the Golf R Estate, is doing the same today. Can the new-age VW eclipse Audi’s old hand?
Open gallery
Close

These two cars are separated by little but time.

Just nine horsepower. Seven pounds feet of peak torque. Two kilograms of unladen mass. They share precisely the same manufacturer claim for standing-start acceleration: 4.8sec, 0-62mph. And yet one of these two founded the automotive market niche that, decades later, the other has graduated into: that of the performance-tuned estate.

One of these cars was revered; given an instant and permanent place in fast-car folklore. It became the answer to a pub quiz question that anyone who read car magazines in the 1990s remains, to this day, ready to answer. The other, hidden in the shadow of its five-door sibling, has scarcely been given a fraction of the attention it may deserve. 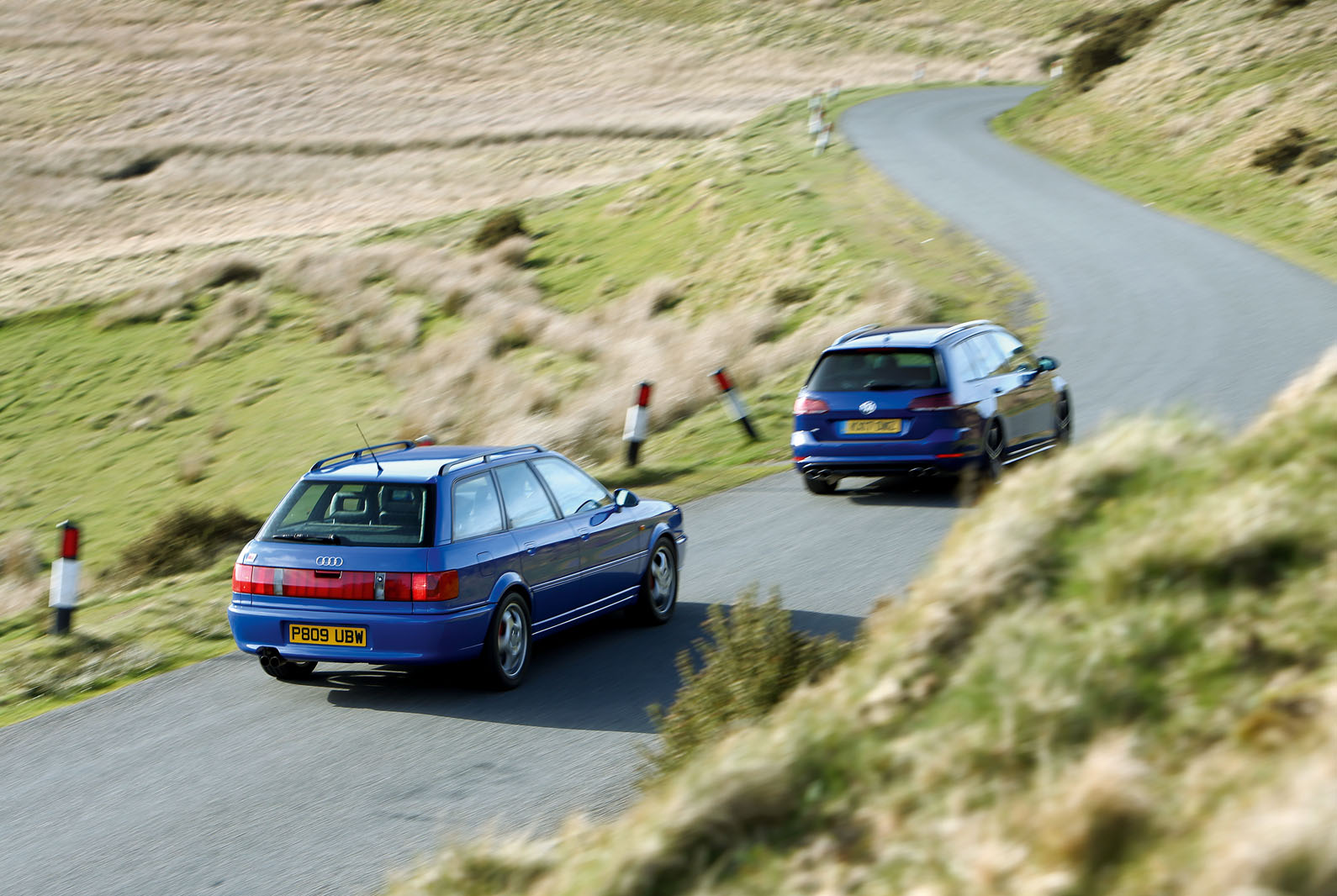 Time to see where the credit is really due in the cold light of 2017. Has the Audi RS2 Avant, Ingolstadt’s fabled supercar-slaying original firebrand shooting brake, finally been upstaged by another big-hitting, even more affordable alternative: the latest Volkswagen Golf R Estate?

And even then, it wouldn’t have the RS2’s pioneering status. This was the original ‘RennSport’ Audi: a limited-run toe-dipping exercise with wheels, brakes and tyres taken from a Porsche 968 Club Sport. The five-cylinder engine under its flatnose bonnet had been donated by the venerated Quattro coupé and then boosted to new heights of potency. And when the RS2 underwent the Autocar road test, it memorably proved what a fast 4x4 could do by out-launching the mighty McLaren F1 from rest to 30mph.

Twenty-three years is plainly a long time – and yet it also doesn’t seem nearly long enough to me to have made such a celebrated giant-killer vulnerable to a giant-killing itself by a modern hot hatchback that has effectively had a kitchen extension. You couldn’t ask for a better example of the pace at which the car industry moves, though. The Golf R isn’t even the quickest hot hatch on the market – but it is one of the few that combine the availability of an estate bodystyle with four-wheel drive and a power output that exceeds what feels increasingly like the current mark of respectability for the affordable performance crowd: 300bhp. 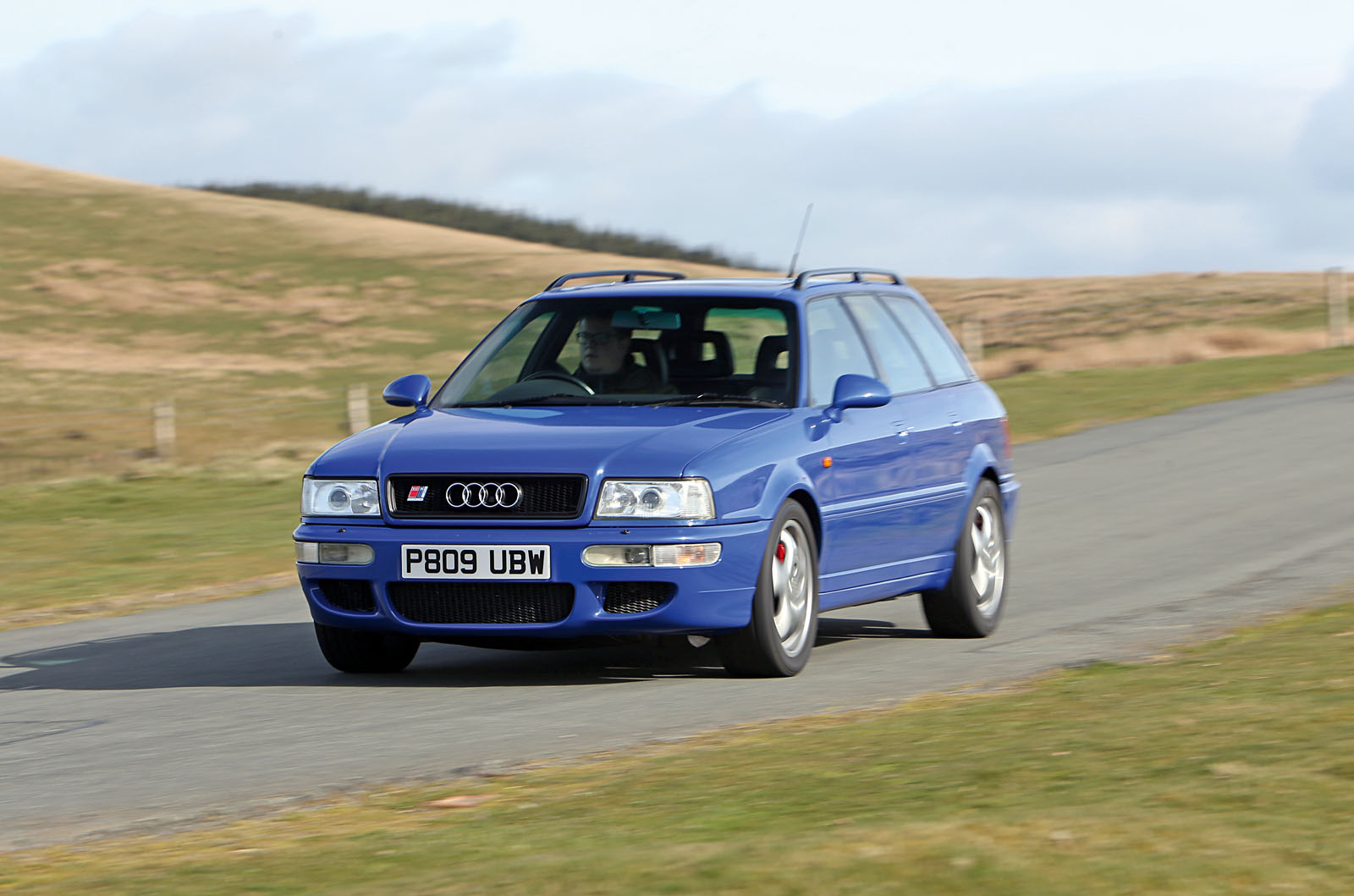 Before we get stuck in, we can agree that chucking any 20-yearold performance car in with a new one and using the latter as a rod with which to beat the former is a fundamentally unjust thing to do – so I’ll try not to do it. The greatness of the RS2 Avant is not at stake today. That was defined in reference to its contemporaries. But we can at least satisfy ourselves that the particular Audi we’re sampling is a representative example of the car as Audi (and Porsche) created it, rather than as variously abrasive time and use might have otherwise left it. Owned by Audi UK since new, having done fewer than 2500 miles in that time, and still on the Dunlop SP Sport 8000 tyres and original suspension consumables that it rolled out of the factory with, ‘P809 UBW’ might be the most valuable RS2 in the country – if it were for sale. It’s not, of course: it’s here, in front of me, ready for one of the handful of occasions each year when it’ll actually get exercise. Yum.

Only one of these cars has silver door mirrors, and it’s not the Audi. Silver door mirrors have become a hallmark of modern Audi RS cars, and one copied by so many. The irony is that the original Audi RS’s mirrors don’t need a silver coating to be drippingly cool: they were donated by the 993-generation Porsche 911.

Even though it has a taller glasshouse, smaller wheels and longer overhangs, the RS2 blows the Golf R into the weeds for kerbside appeal. The Audi’s proportions are plainly so much better, its details that much more distinctive – the crowning glory being that deliciously 1990s full-width reflector bar on its curvy rump, which makes following the RS2 like having a staring match with Star Trek’s Lieutenant Commander Geordi La Forge in his off-duty Sergio Tacchini shell suit. 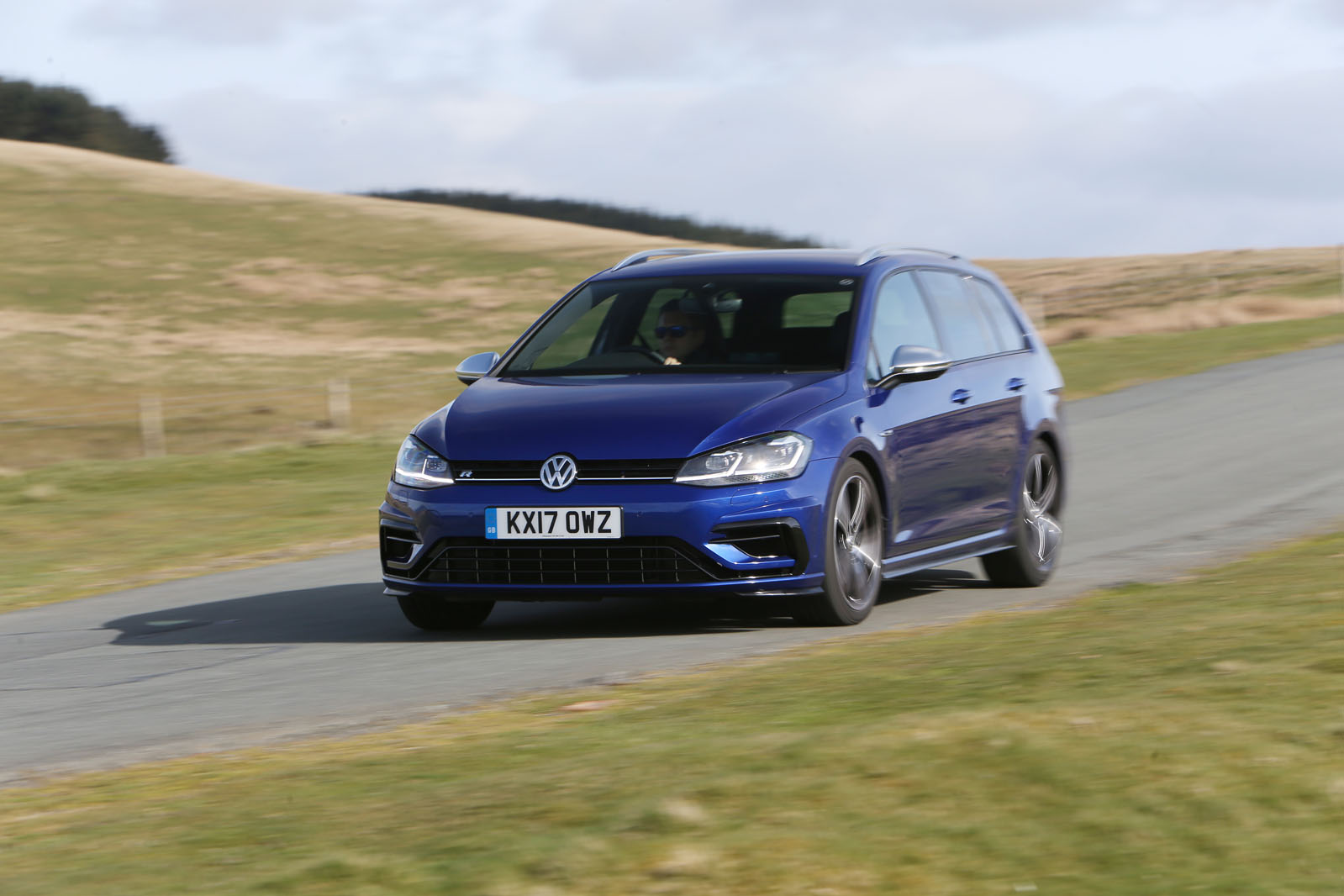 Time for a burble. A really great real-world performance car ought to be fun at low speeds as well as high ones. The RS2 is a joy to simply punt around. Its controls have supreme connected feel. The accelerator, in particular, makes you realise how inauthentic modern by-wire accelerators have become. Long of travel, oily slick and smooth, the Audi’s pedal is a direct and tactile attachment to the throttle body of the car’s five-cylinder engine. It doesn’t store up a disproportionate amount of response for the top half of the pedal travel. It is mostly tuned to make the car easy to drive, and to render the turbo surge of that five-pot Quattro motor possible to modulate and manage. If you want full throttle, you’ll need full  pedal. The last half an inch into the give of the footwell carpet makes a big difference.

By comparison, the Golf R is a relatively ordinary thing to drive slowly. The VW’s steering has greater weight and directness than the Audi’s but a fraction of the feedback. Its DSG transmission simply requires less investment of you and its engine, although effusive for a modern four-cylinder, tries to make up for its relative shortage of mechanical richness and charisma with electronic speaker-born imitation engine noise. You don’t need to be 50 yards off the bumper of a warbling RS2 to realise what a fool’s errand that is.

There again, you might care less about how your Golf R sounds when you realise how quick it is. There is absolutely no question, as it turns out, that the VW is a faster realworld prospect than the Audi. The difference between the cars has more to do with response than outright grunt; because when the RS2 hits its stride, it still feels like a very fast car.

But having passed a national speed limit sign on the edge of a town in the Audi, in the time it takes you to shift down a couple of gears, feed that long accelerator all the way in and wait for the revs to climb to 3000rpm, the turbo to fully spool up and the car to start to go, the VW would have already gone from 30mph to 60mph, shifted up a couple of ratios by itself and settled determinedly into a fast cross-country pace quite a long way down the road ahead. Nowhere is the technological progress of the past two decades more plain than in how much more responsive, flexible and effective the Golf’s engine is than the RS2’s. The Audi’s engine is a delight, but even in the upper half of the rev range, it responds with a moment’s latency when you squeeze that pedal. Which makes for an exciting, immersive driving experience – but an antiquated one. 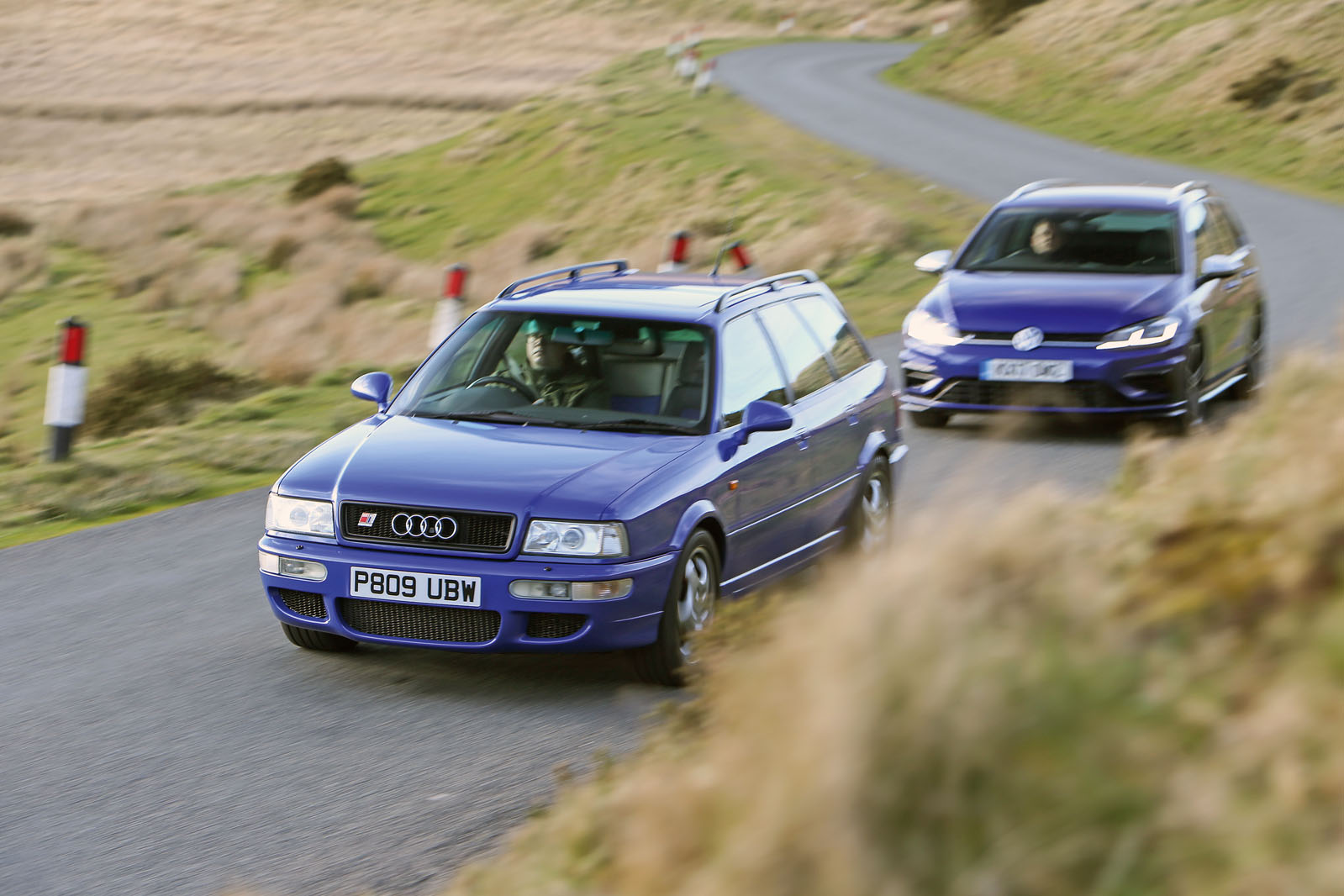 At fast B-road speed, there is as marked a difference in the way the cars ride and handle as there is in the way they accelerate. The Audi is a fast road car done for the road. So much is evident from the softer, more compliant ride it has than the VW, which feels a little bit uncompromisingly damped at all times, but always tightly tied down.

The Golf R steers very well for a modern hot hatch. It’s an instantly pleasing, instinctive, point-andsquirt kind of car. It corners with real bite, excellent balance and very little energy or directional response lost to body roll or understeer. Turning in crisply, settling immediately and passing the burden of lateral grip from its front tyres through to its rears equally smartly, the Golf gets the meat of the bend over in a heartbeat. It invites you to pour on ever greater pace before the steering wheel is even quite straight again. The brilliance of the Golf’s handling is in what it’s holding in reserve: that readiness always to go quicker.

In the Audi, you get something quite different as your prevailing speed increases: the unmistakable sense – as the car’s body control, lateral grip level, steering authority and power delivery all begin to harmonise at around, say, 60mph and 3500rpm in fourth gear on a really testing B-road – that the car is at its best. That it’s simply getting on with doing exactly what it was tuned to do.

You can drive the RS2 too hard on the road, if you’re daft enough; feel the steering feedback turn into kickback over harder-charged bumps and witness the handling balance ebb away. If you tackle slower bends with too much gusto, the Audi begins to handle every bit like you’ve read it does: like a half-empty shopping trolley with too much booze stacked in the fruit and veg compartment. 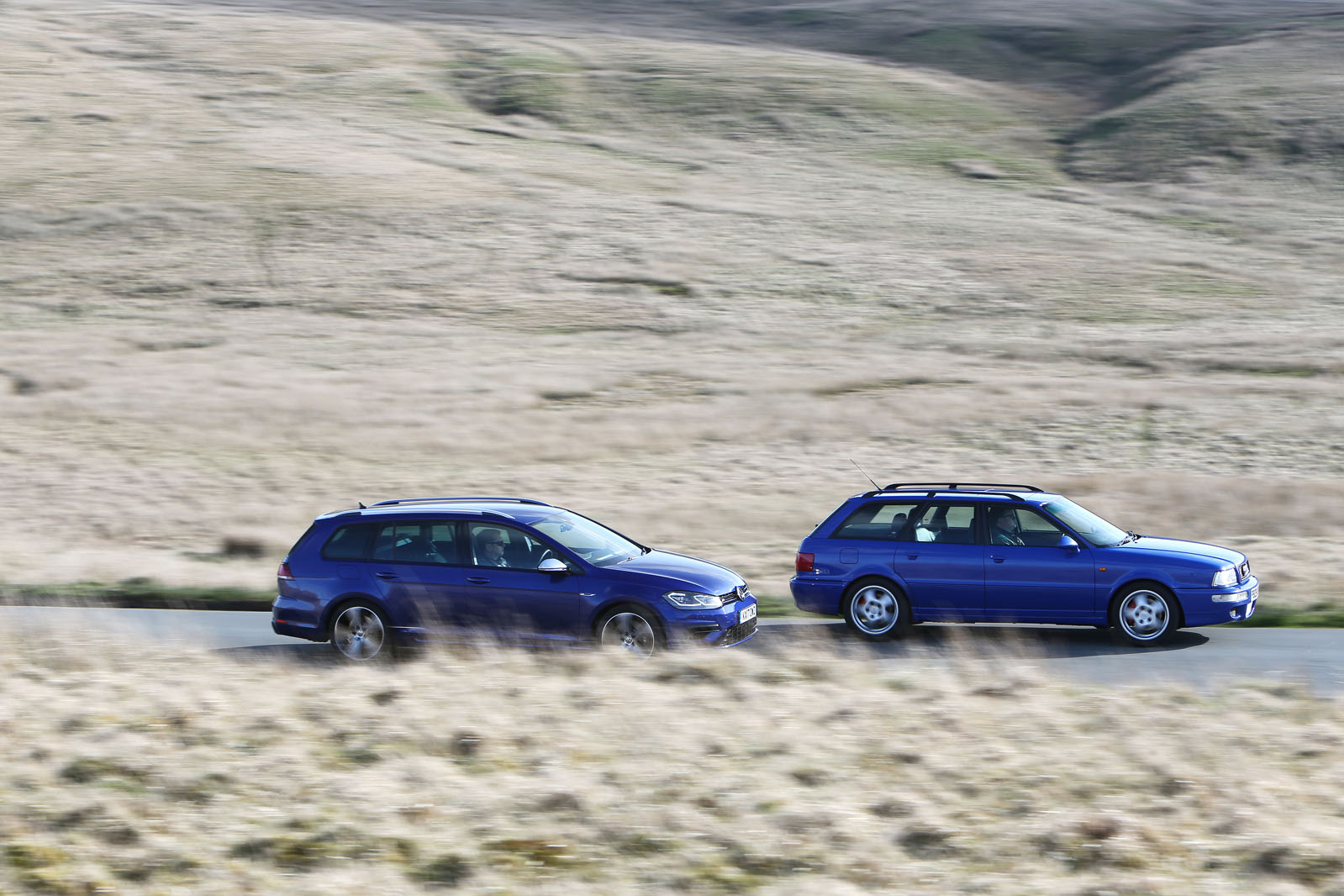 But stick to a brisk but roadappropriate pace and the RS2 gives so much back. The car begins to ride bigger lumps and crests like a hydrofoil hovering above the chop. Its damping is progressive yet still ultimately effective. You negotiate bends in beguiling conversation, committing the car precisely but waiting longer for it to relax onto its outside wheels, and getting a feel for exactly how hard those 20-year-old tyres are gripping, before doling out more boost and trimming your outward line as you go.

Is one car better than the other to drive? Objectively, yes. You simply can’t deny that the quicker, crisper, grippier and better-balanced Golf R Estate would be capable of feats and speeds well beyond the RS2 Avant and, in that sense, the underdog hot hatchback wins the day. It is the better performance machine – and anyone buying one should know it. The reason that it’s not celebrated in quite the same way as the RS2 Avant is that supercars have developed even further than performance estates in the past 23 years and ‘slaying’ them is now a job for machines of even greater power and purpose.

But, antiquated or otherwise, the RS2 Avant retains the greater subjective appeal of the two driving experiences. It teaches us, like so many enduring performance greats, that how fast a driver’s car may go, even in 2017, should be regarded as of only equal importance to how it goes fast. The march of technology will always advance one side of that equation, as has become particularly plain today. It’s up to the effort, skill and judgement of car makers to advance the other side.

Can't see the point of either of these vehicles. Sounds like journalists trying to do PR for VAG. Overrated old crap from audi just like the road going original Quattro.
mfe 1 May 2017

Think if I was going for a vw group fast estate for family usage I'd pick the Skoda Superb 280 TSI 4X4 estate. Alot more room than either the golf or the leon!
runnerbean 29 April 2017

If that Audi's really still on the 20-plus-year-old tyres on which it rolled out of the factory, then it might be time to change them.
View all comments (6)