BACK TO ALL NEWS
Currently reading: All-electric Maserati Alfieri coming in 2020
UP NEXT
2021 Jaguar XF Sportbrake: facelift previewed in new images

Maserati confirms that an electric Alfieri will arrive in 2020, shortly after a conventionally powered variant is released
Share
Close
Share story

Maserati has firmed up its radical plan to launch a battery-electric version of the two-seat Alfieri sportscar and has set a launch date of 2020 for the model.

Rumours of the electric sports car surfaced in the summer, but Maserati has now confirmed the pure-electric model as the second powertrain of the new Alfieri, to be launched a year after the twin-turbo petrol V6-engined sportscar makes its debut in 2019.

The Alfieri concept shown in 2014 was powered by a V8 and scheduled for production in 2016, but legislative pressure on emissions and fuel economy has made a V6 powertrain the favoured option. By the time Maserati is ready to launch a compact two-seater, EU fleet average CO2 limits will be set at 95g/km.

Given the engineering and cost implications of packaging an electric drivertrain into a platform designed only for conventional engines, it is likely the Alfieri will become the first model to be spun off a new, electrically capable Maserati chassis.

Maserati’s current product and business plan runs to 2018 and will include replacements for the GranTurismo and GranCabrio, the last models to be replaced in its current product renewal programme. 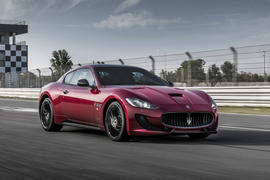 Both the GranTurismo and GranCabrio replacements are understood to be based on the new rear-drive architecture that underpins the Ghibli, Levante and Quattroporte.

Both the coupé and cabrio will retain their 2+2 seating layouts, but the overall dimensions will be more compact than those of today’s models.

This will reduce weight and improve fuel economy and emissions, which will be further helped by a switch to a twin-turbo V6 petrol engine in place of today’s charismatic V8. It will also reposition the GranTurismo away from its ‘two-door saloon’ billing, which currently has it overlapping with the mid-size Ghibli saloon.

More compact dimensions and a less roomy rear cabin will make the Turismo and Cabrio more complementary to the Ghibl.

Engineers can also tune the chassis for more entertaining steering and handling to more clearly position the 2+2 as the sportiest offering in the Maserati range.

I really don't get the logic

23 November 2016
I really don't get the logic of a move like this. Taking a niche sportscar and turning it into a plug in will win how many customers exactly? They just seem to be planning a car to compete with the slow selling BMW I8.

By contrast look at Jaguars plans. Take a popular car like a cross over, make it electric and charge a premium for it. That really is the sweet spot in the market.

Maserati should take electrification to a premium 4 seater. Rumours are the next Jaguar XJ will go electric which again makes perfect sense. The XJ is currently crowded out by cars like the S class and 7 series. So in doing something different in an area of the market where they might sell a reasonable number of cars makes total sense. You don't hear Jaguar talking about an electric F type or Porsche talking electric Boxters. Take note Maserati!

24 November 2016
Why also take the Gran Turismo & convertible and make the rear 2 seats shorter. It's one of the few sports sedan/convertibles that you could actually put people in the rear. Make it shorter to compete with what? The only reason to buy it is the advantage of the two extra seats in a slick 2+2 package. It's not in the class of Aston DB9/11's and in it's price range, what does it really compete with. Take it down into Jag F-Type territory? Why? I say make it slightly bigger and this is the car that should have the same 4 seats and be electric, or at least give it 30 to 50 miles on a plug-in with a 6 turbo/supercharged attached. In fact, a Gran Tourismo 4 door coupe'with plug-in would be really great. If Audi can stretch the S-5 to a slick coupe', then Maserati can stretch this car. Then this would be a smash for Maserati and a volume car. That way the Gran Tourismo could be 3 cars off one platform with drive train variations. the Alfieri? Just not sure if this is any form of volume vehicle unless it is a Gran Tourismo replacement with the variations proferred.

24 November 2016
The Maserati GT sits in a 2+2 market all of its own except for the Ferrari Lusso. Would seem silly to me to make the car smaller and less useful just to save weight and to fit a V6. Maserati have been using Ferrari V8 for years, so stick the California V8T in there. In any case, Maserati does not really seem to know what to do. The GT carbo was out and now it is back in, change in size/power/layout and this is for two cars supposed to come out in 2018?

24 November 2016
The Maserati GT sits in a 2+2 market all of its own except for the Ferrari Lusso. Would seem silly to me to make the car smaller and less useful just to save weight and to fit a V6. Maserati have been using Ferrari V8 for years, so stick the California V8T in there. In any case, Maserati does not really seem to know what to do. The GT carbo was out and now it is back in, change in size/power/layout and this is for two cars supposed to come out in 2018?