BACK TO ALL NEWS
Currently reading: Alfa Romeo lines up hot Quadrifoglio EVs from 2024
UP NEXT
Dacia bosses "fighting tooth and nail" to bring Spring EV to UK

The first battery-electric Alfa Romeo will arrive in 2024, new company boss Jean-Philippe Imparato has confirmed - and it could gain a Quadrifoglio-badged performance version.

The Italian firm is now part of the Stellantis empire, and it has already committed to launch only BEVs from 2027.

Stellantis CEO Carlos Tavares recently signed off on a bold new product plan that has been developed by Imparato, which includes one new model per year between now and 2025.

That product plan will begin with the delayed Tonale SUV in 2022. Further new models will come in 2023 – tipped to include the Brennero small SUV – and 2024.

“I will launch in 2024 the full BEV version of the first Alfa Romeo to be fully electrified,” said Imparato. “I will have one trim, with two engines: one side will be 100% electrified, but it will be on top of that my first full BEV.”

Autocar understands that Alfa Romeo is working on multiple versions for its battery-electric vehicle models and that high-performance versions could carry the Quadrifoglio branding.

Speaking about performance models, Imparato said: “For all out model launched, I will always study the possibility to make a performance version of the car that will be fully consistent with the product portfolio message we send. If I consider that I’m not able to offer the right level of performance steps of Quadrifoglio, I will not do a Quadrifoglio version.” 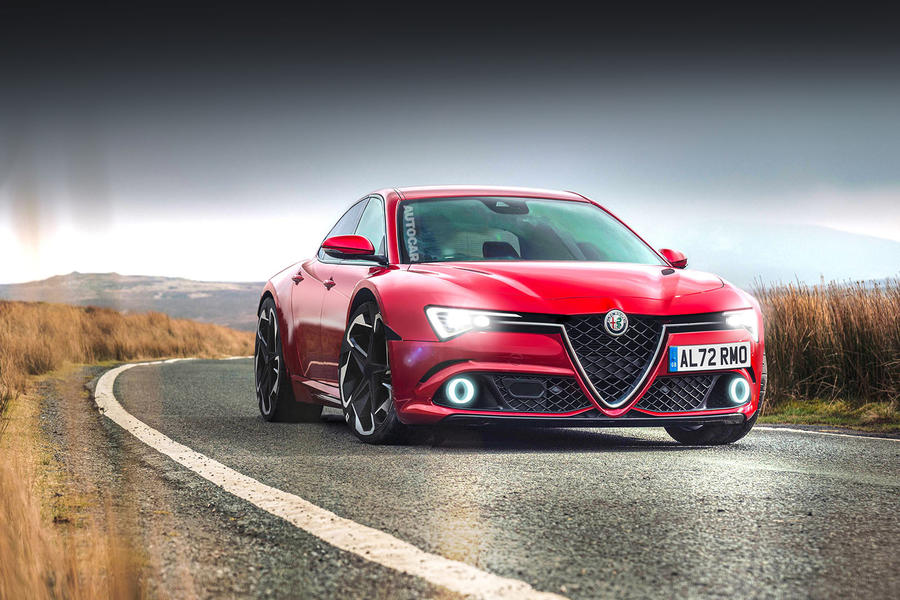 Future Alfa models will make extensive use of the new STLA Large platform that has been developed by Stellantis, with Imparato noting that Alfa Romeo engineers had been involved heavily in the development to make sure it could meet the performance and premium parameters that the brand requires.

Imparato also said that he has a further product plan laid out for 2025 until 2030, including models that will focus more on autonomous driving other technology developments, but that would be dependent on the success of the plan until 2025.

Imparato confirmed that he would be keen to revive the Spider Duetto as an electric car - and admitted that design work had progressed on realising one. However, he conceded that the firm must first focus on growing sales in volume markets.

“I have the car; I’ve showed it to dealers,” said Imparato. “But I would not dare to put that on the table to Carlos Tavares until I'm completely secure in terms of market share.”

Imparato also said that he was keen to revive the GTV as a three-door model, but that such a car would also sit on his ‘dream car’ list, behind a new Spider Duetto.

Despite that, a GTV could appear sooner: Autocar has previously reported that the badge could be revived for a forthcoming two-seat or four-seat model that will help to spearhead Alfa Romeo's electric expansion.

Meanwhile back in the real world the aging Giulia dies a slow death. Are Alfa to be an SUV company only

Andrew1 5 November 2021
If Giulia is dying is because customers don't want saloons unless they have a German badge. Therefore and unfortunately, they'll go SUV only if that helps sales.
JJ 4 November 2021
In addition to looking great, perhaps Alfa could also make their future EV's stand out a little more by equipping them with a range of selectable, synthesised engine and exhaust notes that duplicate famous Alfa's from the past: peak Basso V6, the V8 from the Type 33 Stradale, etc.?
Andrew1 5 November 2021
But only in US, that kind of kitsch doesn't work in Europe.
Speedraser 5 November 2021

I'm in the US. There are few things I hate more than fake engine sounds, whether it's done in an ICE car or an EV.

To each his own, but... Fake engine sounds is, imo, absolutely reprehensible, one of the most appalling recent developments in the car world. In an ICE car, it's just shameful and lazy. In an EV, it's simply absurd. I have a 2018 Giulia, and it's fantastic. The Giorgio platform - unique to Alfa - is probably the single most important reason it's so good. No they're headed back to using a shared corporate platform. Doesn't bode well, sadly. Alfa is somewhat niche, and should stay that way. Enough volume to be viable, of course, so focus on that - not on huge volumes like some competitors. Don't try to make Alfa into an Italian BMW or Audi -- that hasn't worked, and it won't. About EVs: I've driven numerous EVs, from Tesla to Taycan. They're impressive in many ways, yet I have no desire whatsoever to own one.

Please do it Alfa - we might then actually get some decent looking EV's!