BACK TO ALL NEWS
Currently reading: 2026 Lotus Type 135: Electric Elise successor detailed
UP NEXT
Test drives remain as critical as ever for car buyers and sellers

Lotus is ramping up development of the all-new, pure-electric sports cars that will take the place of the now-retired Lotus Elise, Lotus Exige and Lotus Evora at its UK HQ in Hethel from 2026.

As the company prepares to put the 130-run Evija hypercar into production and get the Emira, its final combustion-engined car, into dealerships in the coming months, it has revealed the first details of the E-Sports architecture that underpins its bold plan to electrify all future sports cars. More ‘lifestyle’-oriented EVs, including the Type 132 SUV, Type 133 four-door coupé and Type 134 crossover, will be built at the Lotus Technology HQ in Wuhan, China, from next year.

The E-Sports platform has yet to be revealed in its entirety but will be based around a lightweight rear subframe housing batteries and motors, developed by the dedicated Project LEVA (Lightweight Electric Vehicle Architecture) programme.

Said to be 37% lighter than the equivalent structure used by the Emira, it has been designed from the ground up to compensate for the added weight of an electric powertrain and with a view to replicating the typical dynamic traits of previous Lotus models. The batteries can either be stacked vertically behind the seats – in a layout reminiscent of a conventional mid-engined format – or arranged under the floor in longer-wheelbase cars with rear seats.

Its first production application will be as the basis of the Type 135 two-seat sports car, due in 2026 and previewed for the first time recently as part of Lotus’s long-term product strategy announcement. As yet unnamed, the new sports car will effectively serve as the electric successor to the Elise, which recently bowed out after 25 years on sale, by forming the entry point to Lotus’s new-era performance line-up. 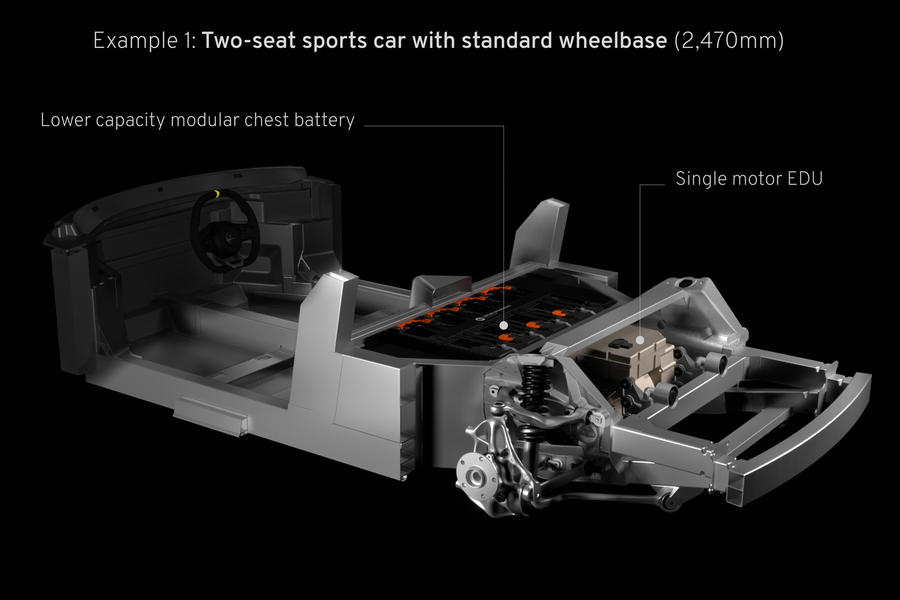 The LEVA unit will be mated to a bulkhead and front end completely unrelated to those used by the Emira, but managing director Matt Windle is keen for Lotus’s trademark dynamic agility to be carried over to the new models.

“It’s our DNA: dynamics, aerodynamics, lightweighting – that’s what we do on all our products,” he told Autocar. “We still want these to be Lotus products. They are going to have a different propulsion system but that system comes with benefits as well: instant torque, easier cooling and better packaging, so the first sports car [the Type 135] will have a lot of storage and packaging benefits as well.”

The E-Sports architecture will host single- and twin-motor powertrains ranging in output from 469bhp to 872bhp. This means the entry-level sports car will pack nearly double the power of even the most powerful iteration of the Elise, and more powerful versions could fill the gap left by the more track-focused Exige.

The E-Sports platform will accommodate rear- and four-wheel-drive powertrains from the off, although the conceptual applications previewed so far by Lotus all use a rear-mounted drive system. Windle told Autocar that Lotus does not “want to close off the possibility” of offering a similar torque- vectoring set-up to that found in the top-rung Evija, which will continue to serve as the brand’s halo model in the coming years in both a marketing and engineering sense. As a result, some of the Evija’s defining features will make their way into more mainstream Lotus sports cars.

One early hint is that the EV will be made as aero efficient as possible with aerodynamic aids “running through the car”, in the vein of the Evija’s prominent Venturi tunnels, thereby taking advantage of the more compact nature of an EV drivetrain. However, the Type 135 will be far more accessible than the hypercar. Windle emphasised Lotus’s commitment to affordable performance and said “efficiencies” throughout the Geely group, which also includes Volvo, Polestar, Lynk&Co and LEVC, will allow Hethel to use components and systems from other brands to keep development and retail costs down.

He said Lotus will struggle to offer the Type 135 at a similar price point to the entry-level Elise but forecasted that a “significant price drop” in the cost of necessary materials and components could enable it to be priced at the upper end of the Exige line-up, which suggests a price of between £80,000 and £100,000.

However, the overarching priority for the Type 135 is to stay true to the company’s long-held reputation for lightweight, accessible performance. Windle said the stacked battery arrangement used for the Type 135 gives “the yaw control and stability that we’re used to setting cars up around” while enabling a “sports car feel”. Notably, Lotus used this arrangement for the first-generation Tesla Roadster, which had a wheelbase only 50mm longer than that of the Elise, on which it was loosely based.

This set-up also allows the driver to sit as close to the ground as possible, like in a petrol-engined Lotus sports car, whereas the underfloor batteries used in larger E-Sports-based cars will raise the seat height – and vehicle profile – by some 100mm.

But Lotus sports cars won’t sacrifice day-to-day usability in their pursuit of dynamic superiority. The smallest battery fitted to this platform will be a 66.4kWh unit, which could feasibly offer a range of around 300 miles in a lightweight, low-slung two-seater (given that sibling brand Polestar’s two-tonne 2 saloon musters 260-273 miles with a similarly sized unit). The larger, 99.6kWh battery – also available in ‘slab’ or ‘chest’ format – could bump up the range to nearer 450 miles.

The architecture will also be equipped with 800V charging hardware to make it compatible with the fastest chargers on the market.

Windle was tight-lipped on the specifics of the other cars that will use the E-Sports architecture but emphasised that Lotus UK “should not be a single-model producer” and will build a line-up of distinct sporting models “in multiple segments in the market range”.

Not every retired model will necessarily be replaced, but the capacity for the platform to accommodate a rear-driven four-seater with a wheelbase of 2650mm paves the way for an electric successor to the Evora, too. 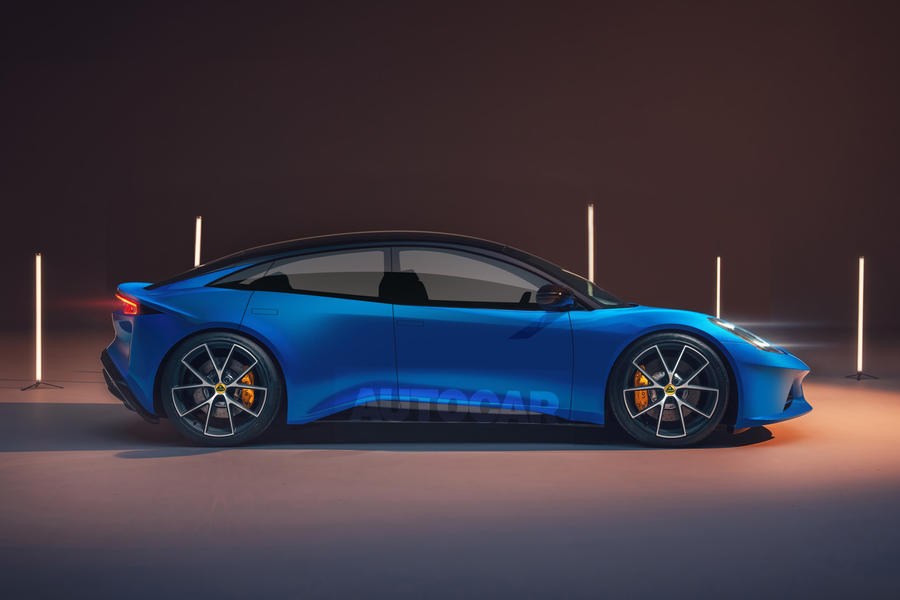 The Type 135 remains the main priority at Hethel currently, so no details have emerged about any potential larger sports cars, but a post- 2026 launch date for such a model – following the Type 135’s arrival – could enable it to serve as the EV replacement for the Emira, and thus provide a dual focus on dynamism and refinement. As the Emira is available with a choice of V6 and turbo four-pot power, any electric successor would be likely to offer a range of power outputs, and potentially rear- and four-wheel drive.

As for the confirmed maximum output of the E-Sports architecture, Windle said “there is always scope” for a Lotus model with 872bhp – more power than a Lamborghini Sián – but he would not be drawn on what that could look like.

Alpine to use Lotus EV platform for next A110

The E-Sports platform has huge implications for the future of Lotus’s own line-up, but it will also find its way into models from other manufacturers.

The firm’s consultancy arm, Lotus Engineering, is already talking to interested parties, but only Renault-owned Alpine has publicly declared its intention to use Lotus-fettled underpinnings. Alpine is collaborating with Hethel on chassis development with a view to launching an EV successor to the A110 coupé.

Alpine’s sibling model to the Type 135, Lotus MD Matt Windle hinted, is likely to have a shorter wheelbase (the current Alpine A110’s wheelbase is 120mm shorter than the Evora’s, for reference) and recent comments by Alpine technical chief Gilles Le Borgne suggest it will, like Lotus’s car, maintain a commitment to agility over outright pace.

“For us, it’s more important to keep the right balance between power and agility. That’s what performance means when you talk about Alpine: it’s our DNA,” he told Autocar, echoing the pledge made by Windle. He also, like Windle, suggested that torque-vectoring functionality will play a role.

Alpine has yet to confirm a launch date for the electric A110 successor but will begin its all-out electrification push with a hot Alpine- badged version of Renault’s new 5 supermini in 2024 and go on to launch a four- wheel-drive SUV-coupé with “really amazing handling performance” among its core characteristics. 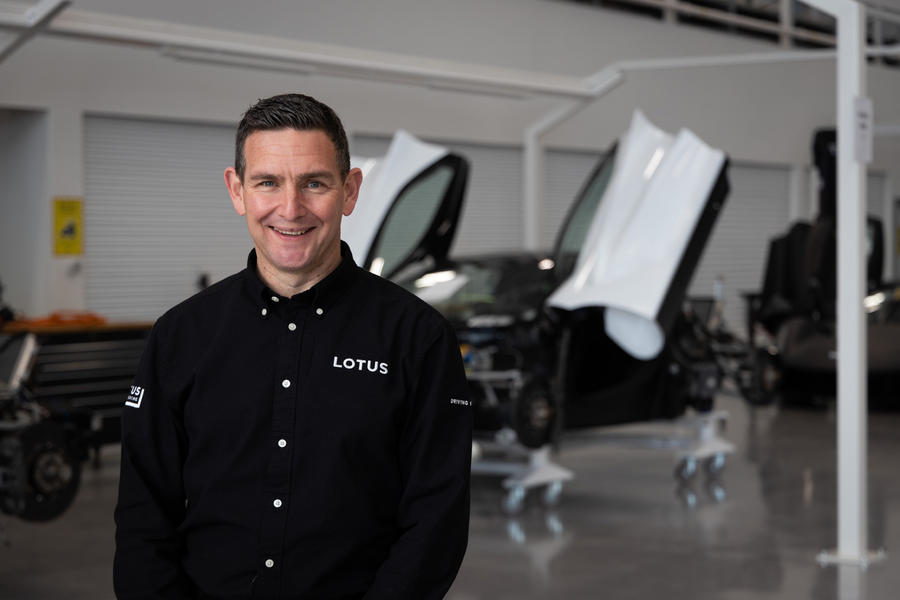 Do you envisage replacing each of Lotus’s recently retired models?

“For me, what’s important is that while we talk about the history of dynamics in our DNA, I also want to innovate and look forward, and EV powertrains give a lot of different options. You’ve seen it on Evija, with the chest battery and the aerodynamics running through the car, so I don’t want to limit the creativity of the team by saying we’ve got to replicate something that’s gone before, but we always will use it as a reference.”

E-Sports can accommodate a crossover, so will Hethel build an SUV?

“No. But this platform has been developed both for our own products and Lotus Engineering. It was part of the Vision80 strategy that we sold to Geely, and they agreed that if we designed our own platforms, we would not only get the products we want at the end of it, but it also gives us a way to commercialise those platforms with other OEMs. We have tried to make them as adaptable and flexible as possible, so if somebody wanted to do a sports crossover, they could probably do it on this platform.”

“The biggest element of our revenue will be from vehicle production. However, it is a significant part of our plans going forward. We believe that we have the people, the innovations and the technology that can help advance people’s programmes. We’re an open business, and we’re happy to talk to anybody and to see if we can help them with their future requirements.”

Is there a separation between Hethel’s sports cars and the ‘lifestyle’ Lotus EVs that will be built in China?

“No. We are a global brand. Our headquarters are in Hethel but to achieve the volume we need – not just in production but in engineering, testing and design – we are working with Lotus Technology in Wuhan. We all report to the same CEO and we have really strong collaboration. The design of the Type 132 [SUV] has been done in the UK, as has the attribute setting and some of the early development, but as that becomes a mainstream programme, it will be engineered and produced by Lotus Technology. So we do have differentiation between the sports cars and lifestyle cars as far as manufacturing is concerned, but in terms of engineering, PR, marketing and finance, it’s a completely cross-functional operation that is managed globally.”

Log in or register to post comments
jameshobiecat 11 October 2021
I was interested until I read the power figures and the price. Could it not have made do with 300bhp, a 50kwh battery and a £50k price tag? RIP Elise.
russ13b 11 October 2021

Comments are far too predictable. Everyone knows electric cars are more expensive to manufacture, but somehow, because this is a Lotus, it shouldn't cost much more than the Elise. How? Yes, the price seems incorrect when compared to the Emira, but that will be being replaced by an electric car, and inevitably take a similar price hike, redressing the situation. Complaining about the styling, despite these pictures having nothing to do with Lotus; really? Since when was the Emira an Elise replacement? It's almost the same dimensions as an Evora, and uses the same engine and gearbox. With Lotus, everyone is always very fast to complain, but also very slow to think.

I don't really get how this is an Elise replacement. We already have that, its called the Emira. This is 20k more than the Emira and its electric, its a different level...