BACK TO ALL NEWS
Currently reading: 2022 BMW X7 brings new design, engines and tech
UP NEXT
Lotus Emira vs Porsche 718 Cayman

The facelifted BMW X7 receives a bold new front end featuring a split-headlight design and a raft of detailed changes, including an upgraded interior with updated technology and new mild-hybrid petrol and diesel engines.

The 2022 model, unveiled ahead of a start to UK sales in August, arrives three-and-a-half-years after the Audi Q8 and Mercedes GLS rival first went into production at BMW’s Spartanburg plant in the US.

The distinctive split-headlight treatment on the updated X7 is part of a new design strategy for BMW. In the future, the German brand plans to provide each of its model lines with its own unique look, with differing models, whether saloon, estate or SUV, set to share common design elements.

The front bumper has also been heavily reworked, with new vertical air ducts integrated into the outer section for the cooling of the front brakes. The lower air ducts have also been redesigned, gaining new aluminium-look elements.

As on the recently unveiled facelifted BMW 8 Series, the X7 also features Iconic Glow cascade lighting for its front grille. It comes as standard on the new range-topping M60i xDrive and is offered as an option on other variants. 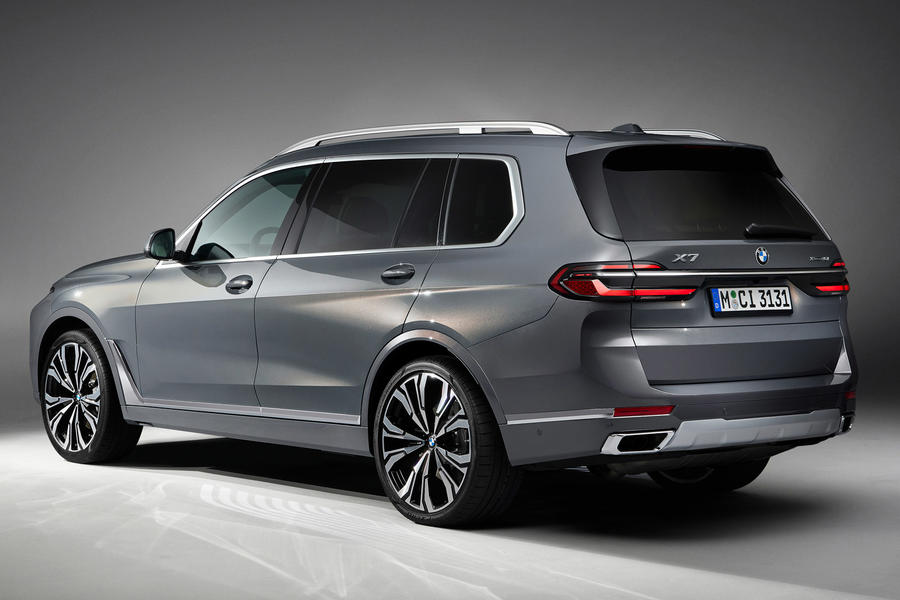 At the rear end, the tail-lights receive greater sculpting and new-look LED graphics. The chrome bar integrated between them has also been lightly modified.

As before, buyers can specify an M Sport styling package, which mimics the styling of the new M60i xDrive and brings 21in alloy wheels (up from 20in as standard).

Together with newly designed 22in wheels, the facelifted X7 is the first BMW to offer optional 23in wheels.

Inside, the hooded instrument panel and central display make way for a new curved display that's similar in look to that in the new BMW iX. It combines a 12.3in display for the instruments and a 14.9in display for the infotainment functions in a single unit offering touch control and running BMW’s eighth-generation operating system.

A modified dashboard also receives new ventilation units and switchgear as well as a light band with X7 graphics.

Lower down, there's a new gear selector and iDrive controller within a revised centre console. 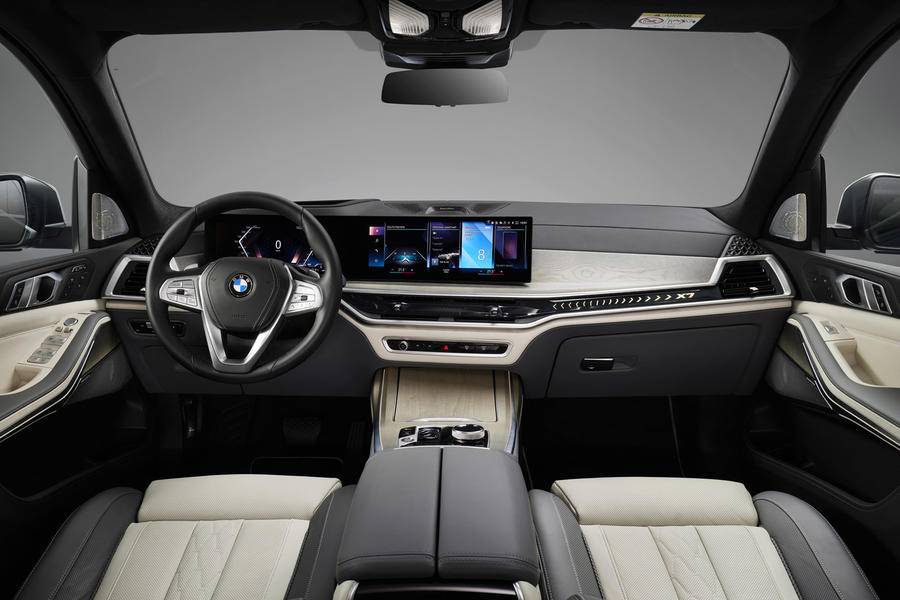 Buyers can continue to choose a six-seat or seven-seat layout. New upholstery options are also offered.

Central among the changes to the X7’s engine line-up is the introduction of BMW’s latest turbocharged 3.0-litre straight-six petrol and diesel engines.

Each engine receives new 48V mild-hybrid properties via a crankshaft-mounted starter-generator integrated into the front section of the standard eight-speed automatic gearbox, endowing them with electric boosting for added performance and engine-off coasting functionality for improvements in overall efficiency.

The flagship M50i xDrive has been replaced by a new M60i xDrive. Its N63 turbocharged 4.4-litre V8 petrol engine also receives mild-hybrid functionality. Nominal output remains the same at 523bhp and 553lb ft, although BMW says the electrification measures provide an added 12bhp and up to 148lb ft of torque. It claims a 0-62mph time of 4.7sec and an electronically limited top speed of 155mph.

Details to successor models to the X7 xDrive30i and X7 xDrive50d are yet to be confirmed.

Am I the only one who likes this update? Pretty it is not, but it has presence. It is an improvement on what it was before.

That dashboard looks huge!, your quite some distance from the base of the Windscreen.

Elsewhere it's being reported that this new look front end / headlamp arrangement will feature on the new 7 series too. Sorry to be the bearer of more bad news.