Start-up All Terrain All Electric (ATAE) will become only the second car manufacturer in Scotland when it launches its new Munro SUV: a rugged, off-road-oriented 4x4 with a one-tonne payload and 150-mile range.

The first prototype has been completed and has begun off-road testing ahead of a full-scale launch in 2022. The exterior remains largely unpainted and the interior is only partly finished, but the powertrain is fully functioning and the underpinnings largely signed off, so a 12-month dynamic testing programme has commenced at an off-road track close to Edinburgh. ATAE plans to begin taking pre-orders soon, and anticipates a "step-change in the design and performance" of successive prototypes.

Established by Russ Peterson & Ross Anderson, ATAE aims to fill a gap in the market for a back-to-basics electric off-roader. Based at their Dalmarnock workshop, the pair have designed the new model around the already-proven body and chassis of the conventionally fuelled Ibex F8 from Yorkshire manufacturer Foers. Peterson explained they had first looked at using the Land Rover Defender but with others such as Twisted beating them to the punch with EV versions had decided against it. There were also the additional costs involved with upcycling second-hand Defenders to consider.

The F8, a tried-and-tested design commonly regarded as one of the most capable 4x4s on the market, has become the ‘Munro’ upon fitment of ATAE’s EV powertrain - a name which reflects the brand’s Scottish heritage. As well as private buyers, the model is pitched at farmers, estates, national parks and adventure companies. There is also a potential for sales to utility companies that require remote access to power lines and other infrastructure.

With the Munro still in development, the company is keeping details close to its chest until a full launch later this year, but has confirmed that it plans to use predominantly components sourced from the UK, including the batteries. ATAE has yet to name a supplier, and the exact specification is yet to be finalised, but the company is aiming for a range of around 150 miles per charge, with DC rapid charging enabled. The current powerplant is a US-designed motor producing 209bhp and 258lb ft, though future variants could use a different unit. 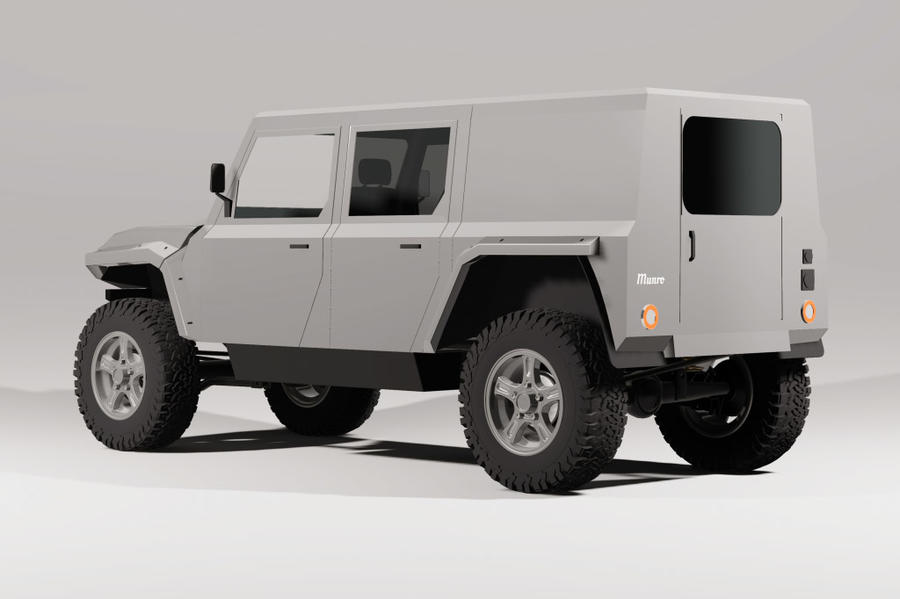 The monocoque architecture is built using the latest construction techniques, while the chassis has been modified to include a dedicated structure to house the batteries. The folded aluminium panels are riveted and bonded to the framework to prevent electrolytic corrosion, extending the life of the vehicle.

Anderson said: “Longevity and repairability are super important for us, from both an ecological and economical viewpoint. We're really going to struggle to cut global carbon emissions if we throw vehicles away after 5-7 years.”

He added: “We want to create a vehicle that you can get into with muddy boots, throw a bale of hay in the back of to feed the horses, then go out camping for the weekend. The fact that it has an electric drivetrain is almost irrelevant since we foresee electric vehicles becoming the new norm very quickly.

Meanwhile, with the emphasis firmly on off-road performance, solid beam axles will be fitted along with a two-speed transfer box and locking centre differential. Towing capacity and payload should mirror the conventionally fuelled Ibex F8 at 3.5 tonnes. Using existing components makes for rapid development lead times, and initial prototypes of the Munro are planned to be completed in the coming weeks, to be used in a comprehensive 12-month testing phase.

Production will get underway in late 2022, with production output planned to remain below 1000 units per year. With no established dealer network, the Munro will be marketed online. Prices will likely be around £50,000 for the standard car, with a slightly cheaper version for commercial use. Options such as a larger battery and a more upmarket interior will also be available on pricier versions.

Fundamentally, it's not a bad vehicle, but did they run out of aluminium panels to finish the job?

It has the aesthetic appeal of a 1980s fridge-freezer.

Where do Foers fit into this, seeing that it's their low volums Ibex which is at the heart of this "new" vehicle, which is surely just a modified and electrified Ibex?

Ibex body fits to ATAE's chassis, which is essentially a revised Ibex chassis and has ATAE's driveline etc. The 4th paragraph tells you.