Peugeot’s 3008 compact SUV has been brought into line with its newer 208, 2008 and 508 stablemates with an updated design, upgraded interior technology and a new plug-in hybrid powertrain option.

The facelifted Ford Kuga rival is now on sale, with prices starting from £27,160 for the petrol-powered car, £29,110 for the diesel and £37,530 for the PHEV. The new 3008 is available in three trim levels - Active, Allure and GT, each of which can be upgraded with an optional equipment package. Entry-level Active trim, for example, is equipped as standard with 17in aluminium wheels, keyless ignition and dual-zone air conditioning - but gains extra kit including electrically folding mirrors and front parking sensors with application of the ‘Active Pack’.

Chief among the styling tweaks is a new front end featuring a frameless grille, reshaped air intakes and the brand’s new vertically oriented LED daytime running lights, which also function as the indicators. The model number has also been applied above the grille for the first time.

The more subtly restyled rear end gains LED brake and reversing lights, sequential indicators and a smoked light cover, which has been extended across the bootlid to “visually widen” the car. 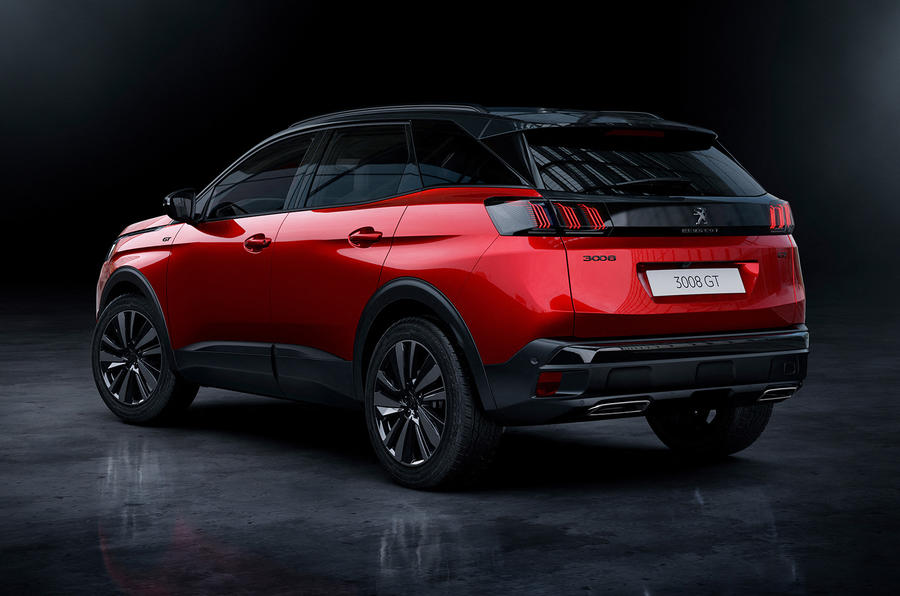 Inside, the 3008 is now more closely linked to newer Peugeot models with the introduction of the brand’s latest i-Cockpit interior layout. The 12.3in digital instrument display now offers improved graphics and rendering for enhanced readability, the high-definition infotainment touchscreen has been upsized from 8.0in to 10.0in and a drive mode selector is fitted as standard across the range.

Combustion-powered cars can be driven in Normal, Sport and Eco modes, while electrified cars offer Electric, Hybrid and Sport options.

The 3008 has also gained a new entry-level plug-in hybrid option to sit underneath the 296bhp, four-wheel-drive Hybrid4 300. As with the Vauxhall Grandland X Hybrid, the new 3008 Hybrid 225 features the PSA Group’s 178bhp Puretech 180 1.6-litre four-cylinder petrol motor mated to a 108bp electric motor for a combined 222bhp, which is sent to the front wheels only through an eight-speed automatic gearbox.

The new plug-in option shares its 13.2kWh lithium ion battery with the more powerful car, and is capable of travelling up to 35 miles on electric power, compared to the Hybrid4’s 37 miles. Both cars can be charged in 1h45mins from a 7.4kW wall box.

Two petrol engines remain available: the Puretech 130 1.2-litre three-cylinder with a six-speed manual gearbox or an eight-speed automatic, or the Puretech 180 1.6-litre four-cylinder available exclusively with the automatic. The BlueHDi 130 1.5-litre diesel engine has also been carried over.

Why does a mainstream brand compact SUV...

I've been moaning about the ridiculous rate of car price inflation for a few years now but things have got so out of hand now that it's absolutely comical.

I used to buy a new car every couple of years, but I won't be doing that any more. I can afford it, but I resent being taken for a mug.

Agreed and would you really want to spend over £30k and still only have a 1.2 3 pot.

Yeh, but just look at the price.

It says expect the price to be slightly more expensive than current model. I looked at one of these things before choosing the Karoq. Putting all the good and bad things to one side, what struck me was the price of it. Since then there has of course been tax rises etc so just checked on the price of the car I looked at. With metallic paint and upgraded speakers, the 1.2 3cyl GT Premium auto is coming out at just under £36000.   £36 grand ffs for a small family Peugeot SUV.  The world has gone bonkers.

Of course that's before discounts. If you purchase via a broker, it's ONLY just over £29k

Forget about it's rivals, this is well in to BMW, Merc and Audi territory. In fact it may even be more expensive!  It may have designer appeal, but you cannot hid the fact that when you look lower down the panels and especially the boot, you're being presented with cheap flimsy plastics. IMO the Karoq kills it on build quality.