BACK TO ALL NEWS
Currently reading: 2018 Bentley Continental GT to be brand's most high-tech car yet
UP NEXT
Exclusive: Morgan bosses detail ambitious growth plans

Built on a Porsche platform and feature an upgraded W12; a hybrid option and autonomous tech are also due to feature in the new Continental GT
Open gallery
Close

The next Bentley Continental GT will be comprehensively re-engineered to give the traditional coupé renewed impetus and appeal as the British car maker readies itself for its biggest year of sales yet.

The forthcoming second-generation Continental GT, depicted here by our artist based on our information about the styling, will be given its world debut at the Frankfurt motor show in September.

Have a look at the fully revealed Continental here

The new coupé is not based on the original Continental GT’s platform. Instead, it has been developed from the ground up as part of a joint project with Porsche and shares its underpinnings with the latest Porsche Panamera. The new Continental GT will also be made as an open-top GTC. Such is the level of technology offered by the new Continental GT that Bentley is already describing it as the company’s most advanced model to date.

“It is second to none in terms of the engineering,” a senior official told Autocar. “We have been careful to safeguard the traditional qualities built up over the years while adding features that extend its capability to a whole new level.”

As well as adopting a brand-new platform, the second incarnation of the Bentley coupé is also set to feature an extended range of powertrains, including a new petrol-electric hybrid unit that will offer the potential for zero-emissions driving.

A 48-volt electronic architecture will also enable the new Continental GT to feature a raft of contemporary driver assistance systems, including autonomous driving technology, according to highly placed sources.

Bentley has decided to upgrade its twin-turbocharged 6.0-litre W12 petrol engine to include a particulate filter, among other changes, to meet the stringent new EU-mandated emissions standards slated for 2021. That means the new Continental GT will continue to provide top-drawer performance, including a 0-62mph time of less than 4.0sec and top speed in excess of 190mph.

As part of a far-reaching reorganisation at parent company Volkswagen, Bentley has been made a key member of the newly created Sports and Luxury Group, which also includes Porsche and Bugatti. The aim of the change is to more successfully amortise costs across the three brands in the areas of engineering, purchasing, sourcing, development, testing and servicing. 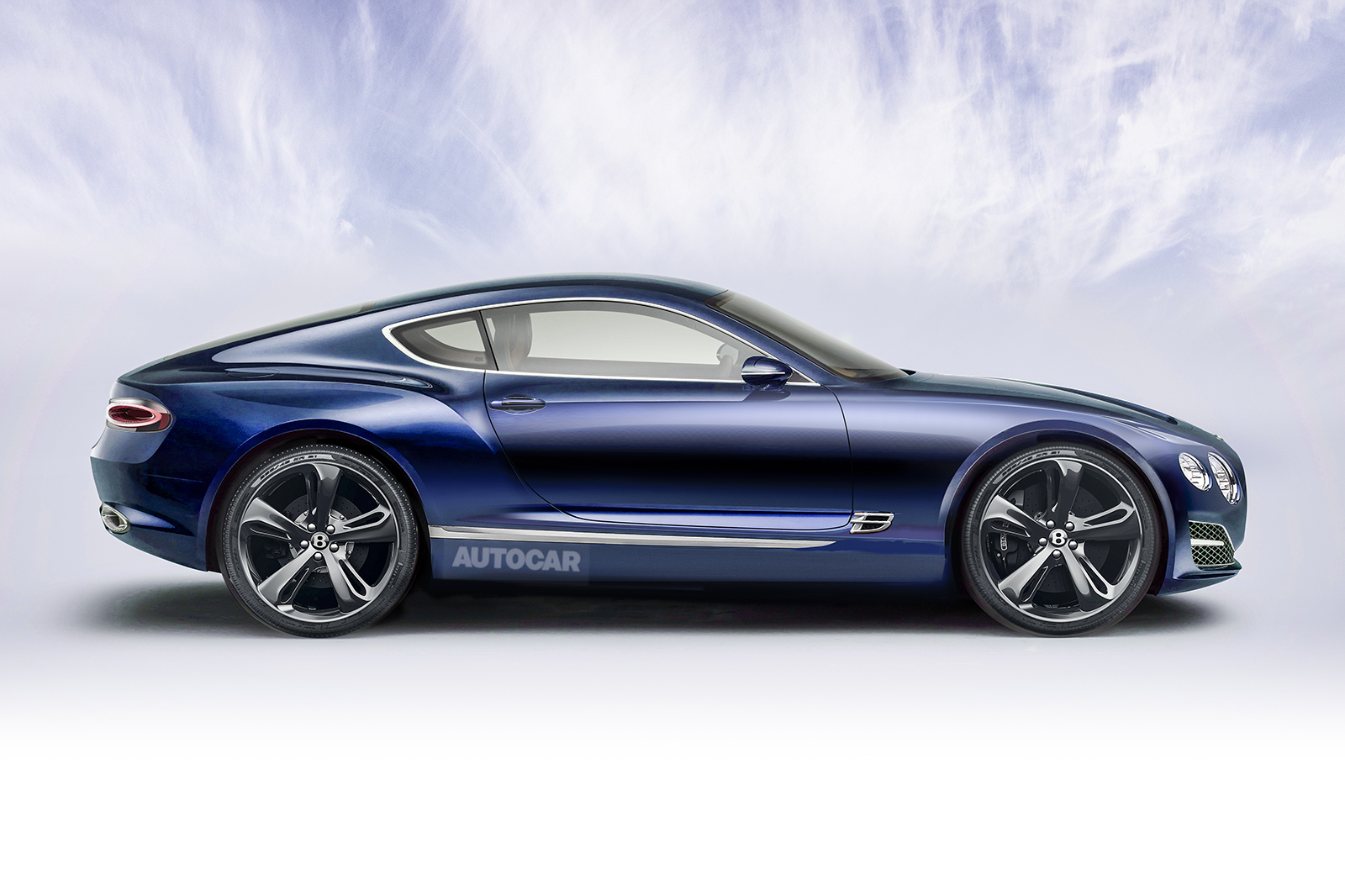 The first fruit of this reorganisation is the decision to base the new secondgeneration Continental GT and its open-top GTC sibling on the Porsche-developed MSB (Modularen Standardantrieb Baukasten) platform.

The MSB structure is more contemporary than the platform that has been used by the Continental GT since its return to the Bentley line-up in 2003. It is claimed to provide the new model with greater rigidity, a significantly improved front-to-rear weight distribution and a reduced centre of gravity — factors that promise to endow it with better handling, sharper responses and greater refinement than today’s model.

Significantly, the new underpinnings provide the scope for both rear and fourwheel-drive versions of the new coupé — something the old platform was unable to offer. Additional developments include rear-wheel steering for added agility and a new air suspension system that uses the same triple-chamber plungers as those found on the Panamera for a plusher ride.

The new platform uses a higher percentage of hotformed high-strength steel than the earlier structure, which was shared with the discontinued Volkswagen Phaeton. Together with the adoption of predominately aluminium body panels in place of the steel panels of today’s model, this has brought a significant reduction in weight, according to Bentley chairman Wolfgang Dürheimer, who has hinted at a saving of more than 100kg.

This indicates that the new base Continental GT should tip the scales at around 2100kg, with more upmarket models set to come in at less than 2200kg. By comparison, the lightest of today’s Continental GT models, the GT3-R, weighs 2195kg.

Various exterior styling cues for the new Bentley were originally previewed at the Geneva motor show in March 2015 with the unveiling of the smaller two-seat Speed 6 coupé concept.

More pronounced touches include a lower front end with a shallower but wider grille, a more heavily sculptured bonnet and twin round LED headlights. At the rear, the haunches have become even more pronounced. Overall, the new Bentley appears lower and broader than before, with wide tracks and a unique wheelbase helping to give it a pleasing, hunkered-down stance.

Dürheimer, who once headed R&D operations at Porsche, has had access to his former employer’s new wind tunnel during the development of the new Bentley, which is described as the most aerodynamically optimised model yet from Crewe.

Contrary to earlier speculation, the top-of-the- line Continental GT will continue to be powered by Bentley’s twin-turbocharged 6.0-litre W12 engine. In the outgoing Continental GT, it produces 581bhp and 516lb ft. However, a number of subtle tweaks are expected to swell its power reserves to close to those of the existing Continental GT Speed, which has 626bhp and 604lb ft.

By comparison, the twinturbocharged 6.0-litre V12 used by the latest Mercedes-Benz S65 Coupé produces 621bhp and 738lb ft, and the twin-turbocharged 5.2-litre V12 of the Aston Martin DB11 delivers 600bhp and 516lb ft.

The W12 Continental GT’s heady reserves will continue to be channelled through a standard eight-speed torqueconverter automatic gearbox and four-wheel drive system.

Nothing is official just yet. However, the subtle increase in power coupled with the promised reduction in weight is expected to provide the rangetopping 2018-model-year Continental GT with performance on a par with that of the outgoing Continental GT Speed, which has an official 0-62mph time of 3.7sec and a 189mph top speed.

Below the W12-engined flagship will sit the standard Continental GT model, which will continue with a twinturbocharged 4.0-litre V8. However, secrecy surrounds which engine it will use.

Some insiders contend that the new coupé will retain the same Audi-engineered 3993cc unit used in other Bentley models. However, a high-ranking Crewe officials insists that the model will receive the newer 3996cc engine developed by Porsche and launched in the second-generation Panamera Turbo.

Either way, in its mildest state of tune, the new base Continental GT is expected to top the output of today’s Continental S, which offers 521bhp and 501lb ft.

Also planned, although not expected to figure in the initial line-up, is a four-wheel-drive petrol-electric version called the Continental GT Hybrid.

Again, Bentley is remaining tight-lipped about its exact plans, but the petrol-electric unit is the same system used by the Panamera 4 E-Hybrid. In the five-door Porsche, it combines a twin-turbocharged 2.9-litre V6 petrol engine with an electric motor mounted within the front section of the automatic gearbox to provide an overall system output of 456bhp, along with 516lb ft.

The Porsche-developed hybrid system has been heavily reworked by Bentley and is expected to provide the Continental GT Hybrid with a pure-electric driving range of around 50km (31 miles).

Bentley also has the option of introducing a diesel engine to the Continental GT for the first time in the form of the Audisourced twin-turbocharged 4.0-litre V8 motor already used by the Bentayga. However, with the majority of global sales concentrated in the US and China, a diesel model is not a priority for the launch line-up.

Following the Continental GT coupé into showrooms in 2018 will be the convertible Continental GTC, which is already undergoing testing at the hands of Bentley engineers. As with the outgoing model, it features a fabric roof.

In 2019, Bentley also plans to launch a successor to the Flying Spur on the same platform, albeit with a longer wheelbase for more interior space.

Bentley sales on the rise 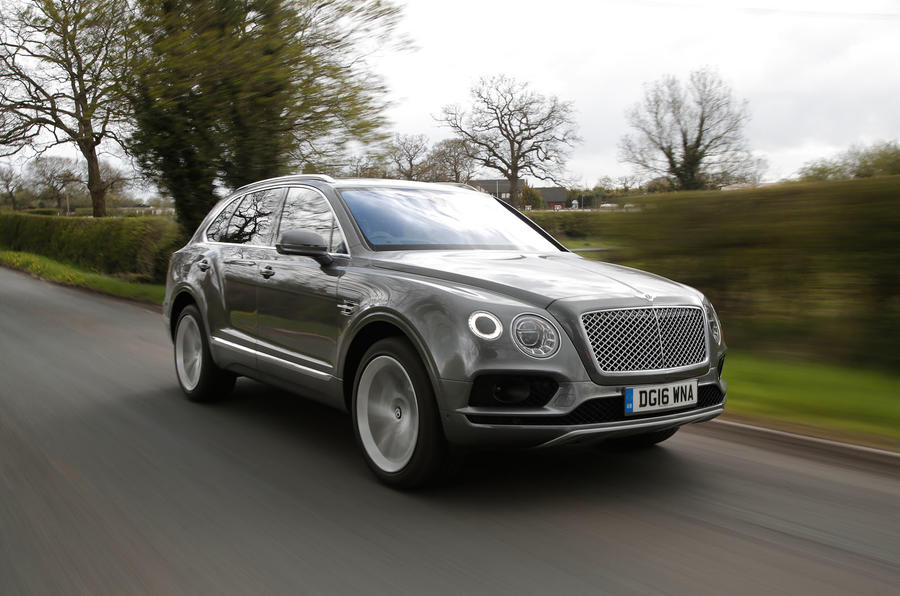 Despite being 13 years old, the current Continental continues to do well for Bentley.

The new Continental will only bolster the premium brand’s growing success, which is largely due to its Bentayga SUV, introduced last year.

The firm was expecting to sell 3600 Bentaygas globally in 2016, but instead it sold around 5600, which is about half of its total sales.

But Bentley’s Chinese plans are back on track and boss Wolfgang Dürheimer has recently told Autocar that China would became the brand’s biggest market within a few years, overtaking the US and Europe. Bentley even tests its car in China for different climates and in city traffic conditions, Dürheimer said.

Bentley has previously said it would like to reach 15,000 sales a year, and with increasing sales of the Bentayga and the new Continental, it is unlikely to be too far from this target. Another model still be decided — either a sports car related to the EXP12 Speed 6e concept shown at this year’s Geneva motor show or a sibling for the Bentayga — will certainly allow it to reach this goal.

Saw the Car today in Person

Saw the Car today in a private Preview in Crewe...

your Rendering is really close to the final car !!! The Grille is significant bigger and the front bumper looks a litte different...

have all the specs too if you're interested in...

If any Car deserved to be updated it's the Bentley,discrete,iron fist in velvet Glove,just two ways to describe it,I don't care if it's based on this or that,it is a great shape and rare to see which means owners know a great Car,whether you like it or not,it deserves to be here.
Wolves 23 May 2017

the current bentley range has very poor infotainment. worse by some distance than a golf. auto cruise is an option (standard on an audi s3)for the price involved the level of tech is laughable.
rtrcountdown 24 May 2017

and you're the kind of guy that would buy a Casio Watch over a Rolex because of the in built Calculator .
View all comments (6)