BACK TO ALL NEWS
Currently reading: 2017 Jaguar XF Sportbrake rear to get F-Type inspired lights
UP NEXT
Spending 48 hours touring in a Ferrari Roma

Estate version of XF will arrive with engines borrowed from the XF saloon; a 2.0-litre diesel will be the entry-level motor
Open gallery
Close

The Jaguar XF Sportbrake has been spotted testing on public roads again, showing that the design of its rear lights will take influence from the Jaguar F-Type.

Spotted by eagle-eyed Autocar reader Rory Anderson, the car's slim taillights feature a rounded section like those of the sports car. The tailgate also features a slim rear window and a heavily raked top capped with a spoiler. 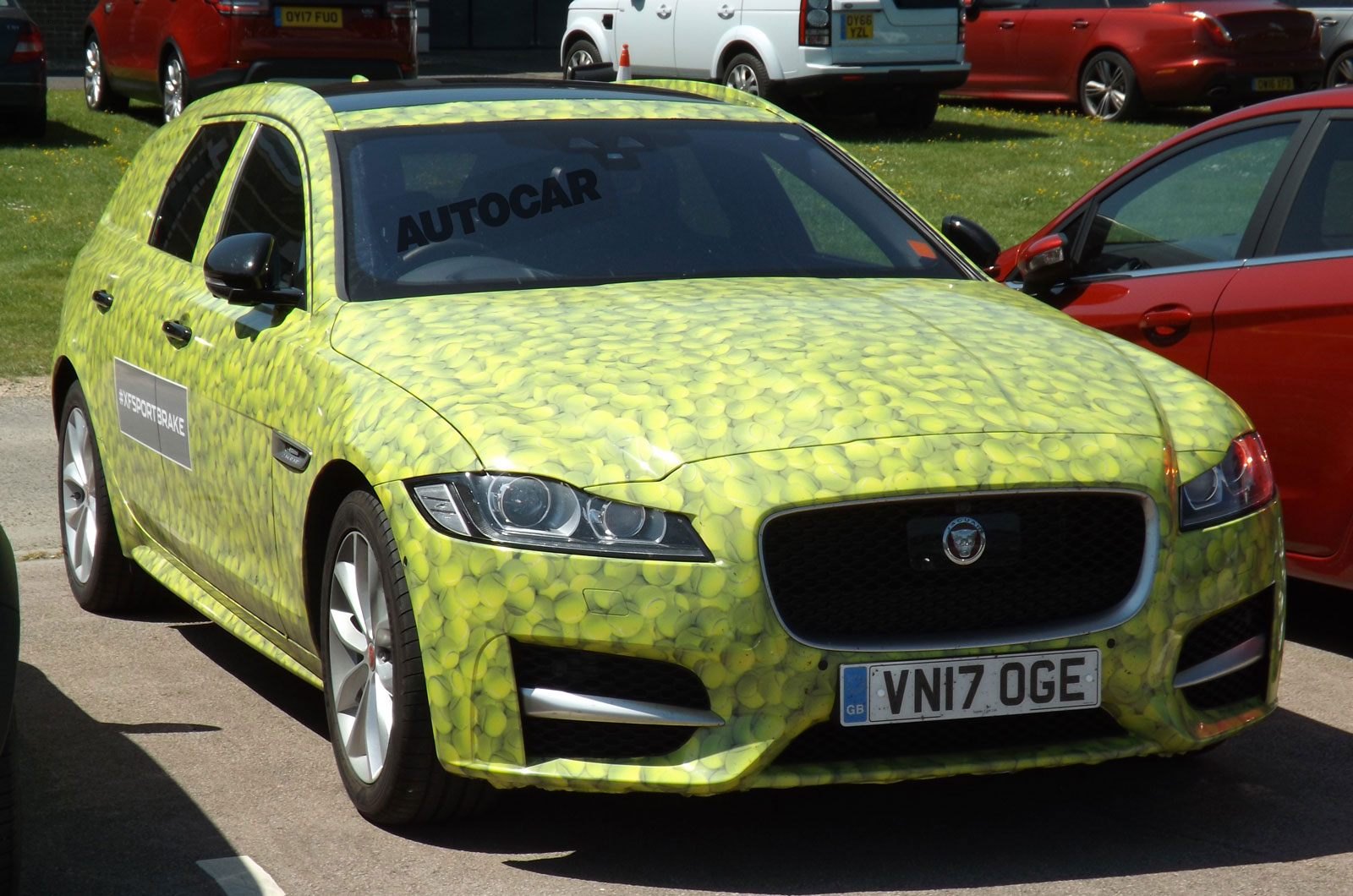 The new model, which will be officially revealed on 14 June by British tennis star Andy Murray as a rival to the BMW 5 Series Touring and Mercedes-Benz E-Class Estate, will introduce a full-length panoramic roof to the range. Its more practical boot will increase luggage space and rear head room.

Prior to the latest sighting, the car was previewed in three images that showed it driving on roads near the world's most remote tennis court and with former British tennis professional Tim Henman. 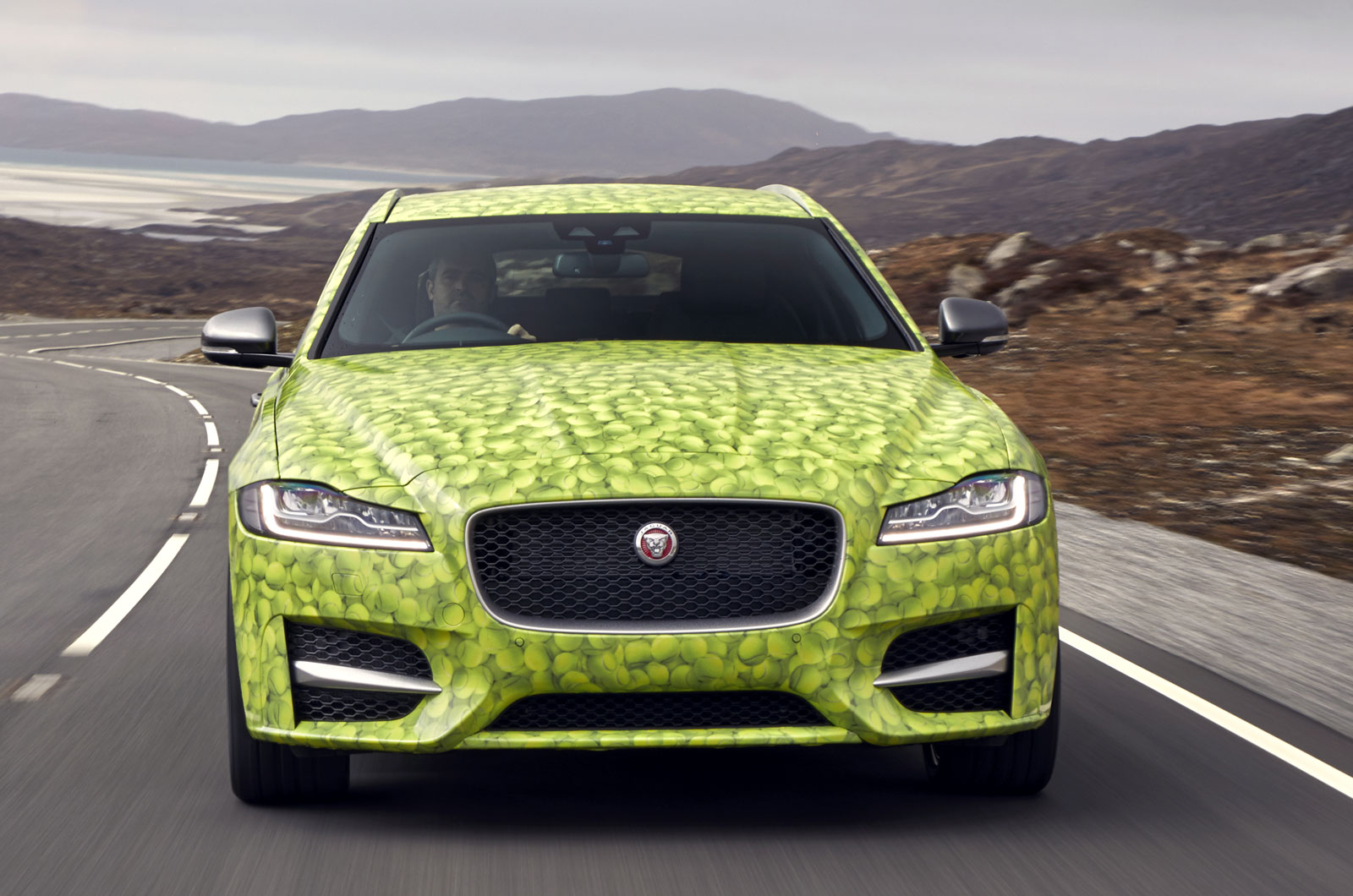 Jaguar claims that its new estate will be the "most dynamic premium estate car in the world", suggesting the chassis set-up will be similar to that of the XF saloon rather than being adjusted to offer different handling characteristics.

The XF Sportbrake will be built upon the same aluminium architecture as the saloon, and it’ll also share engines with its sibling, meaning a 2.0-litre diesel will be the entry-level unit, with 3.0-litre V6 petrol and diesel engines sitting above this in the range. The most recently spotted development car was running the 2.0-litre diesel engine. 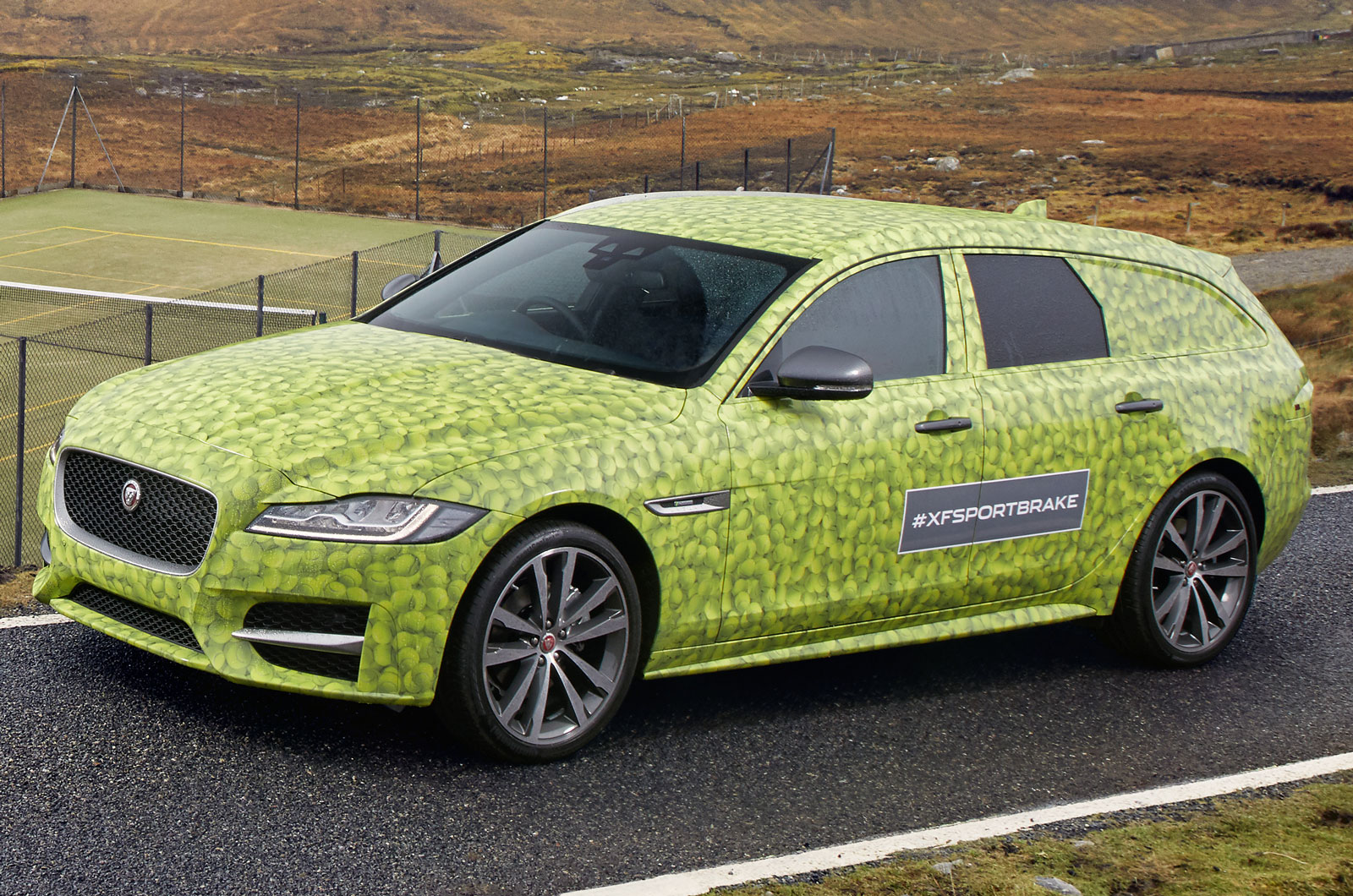 A 2.0-litre petrol engine, as launched along with a new wave of Ingenium units, will also be included with both variants of the XF. Earlier development Sportbrakes (see gallery) have been running with this unit, suggesting it will be available in the model from launch.

Power outputs for the engines range from 161bhp to 375bhp. Drive is sent to the rear wheels as standard through a six-speed manual gearbox in lower models, with an eight-speed automatic offered as an option or as standard with the most potent units. 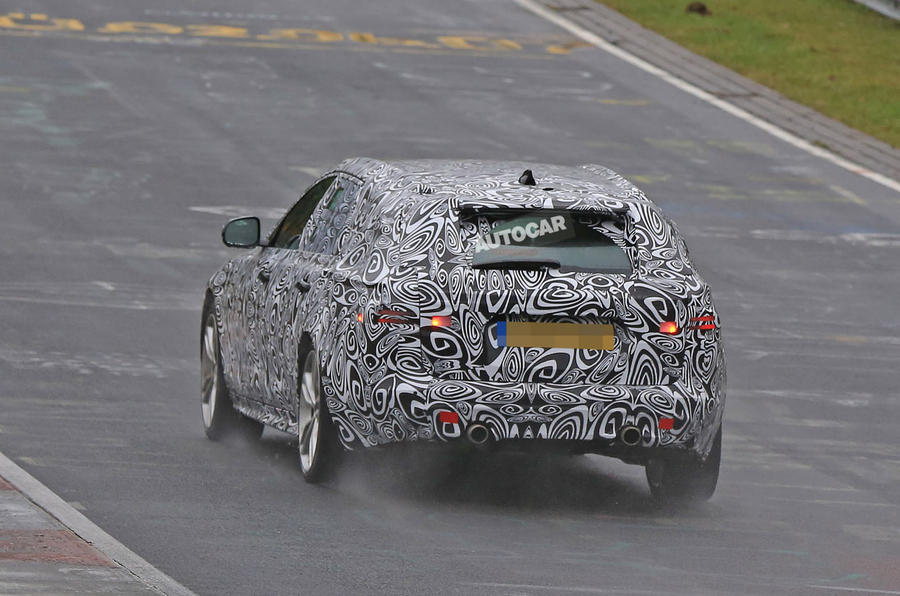 The XF saloon’s optional four-wheel drive system will likely also be offered on the estate. The range will be crowned by an XF S Sportbrake model that'll rival hotter variants of the BMW 5 Series Touring.

Expect the XF Sportbrake to be slightly more expensive than the XF saloon, which is currently priced from £32,300.

We had a couple of XF Estates

We had a couple of XF Estates on a fleet and have to say they were simply superb in terms of build quality and reliability. Covered 300,000 kilometres each in 4 years and no issues other than they were a little hard on brake pads and discs. Superior in terms of reliability to our 520D BMW Tourers. Replaced them with 3 XEs in 2015 and after average of 85,000 kms these are proving to be very robust. Only complaints from users are minor interior trim feels awful particularly indicator stalks but not one breakdown/recovery. Our C-Class are also well liked but while interiors looked great when delivered new, they seem to have not proved as robust as the XE. I am afraid BMW need to go back and look at how they built cars in late 90s early noughties. There cars were beautifully over-engineered then. Great on warranty though to be fair to them.

Hoping an XE Coupe and XE Sportbrake will arrive within the next few years. It'd be nice to have an alternative to the German rivals.
Dunhillion 17 May 2017

I've said the same thing in previous posts, but I'm surprised no one has mentioned it here ... and even more surprised that Jaguar is unlikely to do anything about it for MY18 XFs: interior quality.

The XF has by far the WORST materials and build quality in its class; just look at what Mercedes have done with the E-Class, and Volvo with the V90. The next A6 will almost certainly move the game on as well.

No matter how good the driving dynamics, an interior like that for £40-50k+ is inexcusable. A huge missed opportunity/own goal. Come on Jag, how much would it cost for a new dash and some nicer materials?

At least they've got rid of those awful black rear pillars...

While I agree that the Xf Xe interiors could be improved they are not as bad as that imho,,obviously Range Rovers are way better but equally they cost a good bit more.I looked at Audi recently and whilst good quality I find them to be very boring and the dashboards look as though they are from a vauxhall cresta from the 70's ,leave me cold and the cheap nasty pl;astics in the tiguan are way worse.The Mercedes E class ,of which I had a test drive recently ,is a very nice barring the sat nav screen which looks like an after thought widescreen tv.
Dunhillion 17 May 2017

Ski Kid, fair enough, I'll grant that the XF and XE interiors have a visually pleasing design (much more interesting than Audis) - but have a really good poke around them and the interior flaws become glaringly obvious. The centre console wiggles around much more than it should, the leathers aren't that great, trim assembly isn't perfect (which it should be), the glove box and armrest are wobbly and the plastics are dreadful. Most disappointingly, the latest Jag interiors are alomst as boring as Audis, particularly when compared against current Mercs and Volvos. This is a real shame; the first XF seemed to point the way forward, but with the new XF and XE (even the F-Pace) they seem to have taken a huge step backwards in this respect. I'd love to buy a new Jag, but this is the one issue that entirely puts me off - I can't imagine paying £50k for a car and spending time thinking I'm in a car that's £25k less - regardless of whether I'm in traffic or blasting down a B-road.
View all comments (24)