BACK TO ALL NEWS
Currently reading: 2016 Renault Mégane RS 275 Cup-S - why it marks the end of an era
UP NEXT
Fisker goes radical with Pear EV SUV

Production of the current Renault Mégane RS ends imminently, but the 275 Cup-S celebrates the dusk of a memorable model
Open gallery
Close

The Renault Megane RS 275 Cup-S is the run-out edition of Renault Sport’s hot Mégane in its current form.

It represents one last turn of the product crank handle Dieppe has been enthusiastically turning since 2004. Potentially, given the division’s track record (and its eagerness for actual track records), the final version could have been another skeletal masterpiece in the Trophy-R vein, perhaps divested of passenger seat and dashboard this time and tickled even closer to 300bhp – a front-drive racing car in all but name.

But it’s not. It would take time and money to fine-tune such a car, and with Renault shutting down production in July, the Cup-S is a final, volume-generating throw of the dice rather than a last-gasp effort for yet more kudos. Which is perfect for two reasons.

Number one, simplicity has made the Mégane cheap – really cheap. The starting price for a Cup-S is £23,935. For that, you get air-con, cruise control, a stereo, Bluetooth, an alarm, some RS cloth upholstery, the RS kickplate and dials, the bodykit look and a set of 18in alloys.

There’s no infotainment touchscreen, though, and no DAB, no sat-nav, no climate control, no Recaros or Alcantara. But it does have the stiffened Cup chassis, which means you get the limited-slip differential.

You also get the full 271bhp that was previously the preserve of Trophy cars. And because Renault Sport cars have always tended to be at their most appealing when affordability underpins the lap times, the Cup-S stands a very good chance of being thought of as one of the best.

The second reason is that, kitted out thus, the model bows out as the prime example of what we still believe a hot hatch ought to look, feel and drive like.

No one has applauded louder the advent of the supremely capable Volkswagen Golf R, but its popularity – and the introduction of assuredly upmarket options, such as the Audi RS3 and Mercedes-AMG A45 – has encouraged a market shift towards a high-cost, high-output and almost exclusively all-wheel-drive breed of mega-hatch. 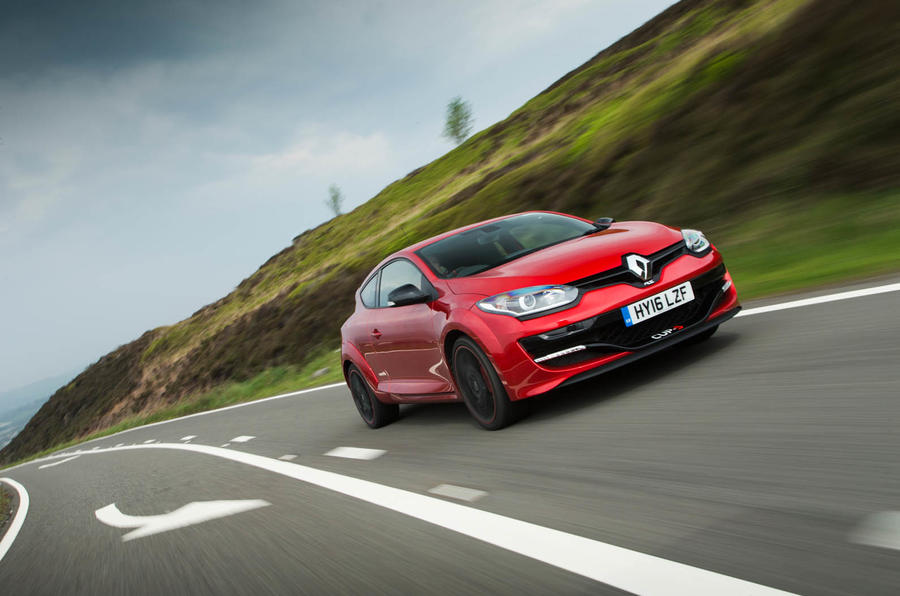 The new Ford Focus RS only confirms the sea change. Its spectacular dynamic ability is proof that handling entertainment needn’t be diluted by the escalation of power and driven axles, but it, too, cannot be bought for less than £31k, plus it weighs the best part of 1600kg and uses up consumables like Elton John gets through flower arrangements.

The Cup-S, in contrast, is arguably the last specimen of an old-fashioned idea: low-weight, low-cost, low-complexity, front-drive fun. A decade ago, the field wasn’t so sparse.

The frolicsome Mk5 Golf GTI was considered a return to form after the mediocrity of the Mk3 and Mk4 and, in 230bhp Edition 30 form, was considered quicker – and better to drive – than the V6-powered R32.

The Honda Civic Type R was in its dainty EP3 pomp; the thuggish Ford Focus ST came with a five-pot engine and the Vauxhall Astra VXR was fast in its own abrasive way.

It’s easy to forget now, but the Mégane of this vintage, originally introduced with 222bhp, wasn’t quite up to scratch (and was definitely thought inferior to the contemporary Clio 182).

The cheaper Cup model improved matters slightly, but it wasn’t until the LSD-kitted 230 R26 that the Mégane hit its stride. Built to celebrate Renault’s success in F1, the car characterised everything we recognise as brilliant about the current Mégane: rigorous steering, an agile, direct and adjustable chassis and just enough power to exhilarate.

Its follow-up showed just how serious Renault was prepared to get. The R26 R produced no more power than the R26, but shed 123kg thanks to a crash diet that famously replaced the glass rear screen with plastic.

It wore trick springs and dampers and could arrive with sticky Toyo track tyres if you wanted. It’s unsurprising, then, that we called it the most hardcore hot hatch the world had yet seen. It broke the Nürburgring lap record for front-drive cars – a feat its descendant, the 275 Trophy-R, repeated five years later. 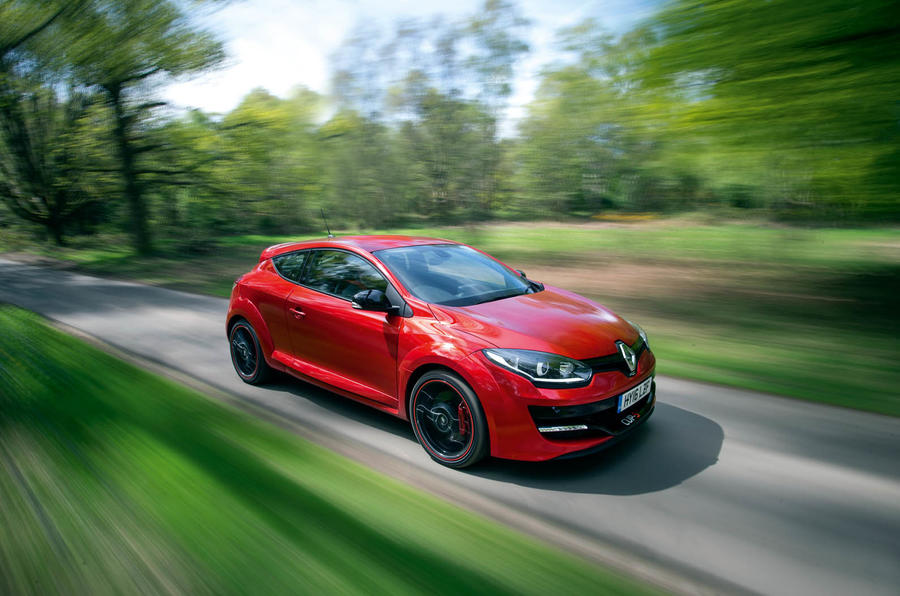 That car was hollowed out like an organ donor, too. The removal of the sound deadening and the back seats, plus the addition of a titanium Akrapovic exhaust, meant that acceleration sounded like an avalanche punctuated by the pop of a starter pistol.

It was a heavyweight boxer lighter than the standard car. The Trophy-R was the antithesis of its rivals’ slide towards comfort and gentility. I remember emerging from it like a Marine from Belize: chafed, scorched and stained. But I was left invigorated and inspired, too – in a way that no iteration of Golf, Focus, Astra or Civic has ever managed, despite each having appeared at some stage with more than the Mégane’s 271bhp.

So good was the R26 R that we took to grouping it with Lotus Elises and Ariel Atoms.

I can’t think of higher praise – especially not for something based on architecture as humble as Renault’s C-platform (as used by such luminaries as the Koleos and Kangoo). But nor can I think of a more testing ownership prospect.

There were 230 R26 Rs delivered to the UK and just 30 Trophy-Rs – the latter costing the best part of £40k. In its own way, that price was as chronic as paying even more today for an A45 – more so, perhaps.

We lauded it at the time and talk about it in glowing terms today – but I wouldn’t buy one, then or now.

The Cup-S, on the other hand, is a different matter. Rather than being ransacked to the point of rawness, the run-out goes back to basics in an agreeable way – as honest as Aldi and just as likely to make the veneer of respectability in its rivals look vacuous.

The car is almost £7k cheaper than the equivalent Golf GTI Clubsport Edition 40, itself a production-limited, last-orders model meant to see out the Mk7. 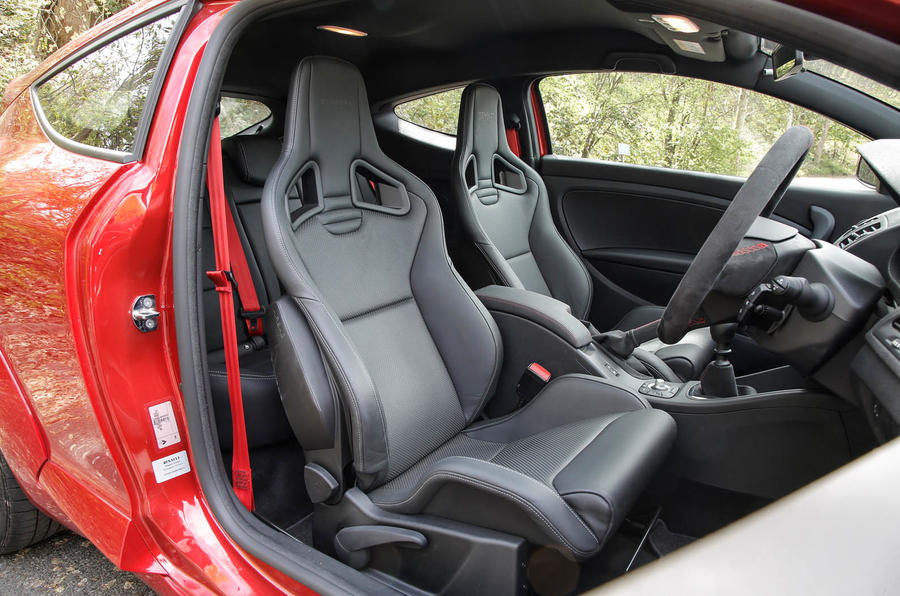 It comes with more kit and kindliness and a similar amount of poke, yet it still plays second handling fiddle to the Golf R. The Mégane is second to none. No hatchback makes you feel as connected to the road or as confident about the limit of that connection.

Our test car came with many of the Trophy-R’s bespoke items re-attached – but remove them all (save, perhaps, the 19in wheels and tackier rubber) and the bond would be no less vivid.

Extraordinary lateral grip and directional responsiveness are common contemporary hot hatch virtues; Renault Sport’s virtuosity is in the tuning of its feelsome controls (the steering is not bettered electrically by anything shy of a Porsche Cayman), while the harmonisation of the mechanical diff and livewire adjustability of a chassis that results from such a terrific sense of modest weight are exceptionally well balanced.

It is a three-dimensional experience, as memorable in its own way as a supercar and, until July, as affordable as a Kia Optima. Then it will be gone for good.

My bet is we won’t see its like again – not in the same mould at any rate, and certainly not in the same spirit-level symmetry of value, mass, potency and temperament. Classic status inevitably awaits. But the excuse for buying the Cup-S is simpler: it’s the best hot hatch on sale.

As an unfortunate owner of a RS200 I have found myself in the same boat as thousands of ther unfortunate Renault customers with a faulty car which Renault won't take ownership for...despite the fact their dealers acknowledge a fault with the car caused by bad design...way to go Renault..I won't be taking the chance of buying another of Renault Sport models