BACK TO ALL NEWS
Currently reading: 2016 Renault Clio Renault Sport updates revealed
UP NEXT
Up and Atom: The Ariel innovators behind Britain's Best Driver's Car

Renault’s sporting supermini, the Clio RS, has been facelifted in line with the rest of the Clio range; Range-topping Trophy has its sights set on the ST200
Share
Open gallery
Close
Share story

The Renault Clio Renault Sport has been refreshed for 2016 with a tweaked exterior and updated range.

The Ford Fiesta ST, Peugeot 208 GTI and Vauxhall Corsa VXR rival is headed by a more powerful version called the Trophy, which rivals the likes of the Ford Fiesta ST200.

The Clio RS has been facelifted to keep it in line with the rest of the Clio range, with a tweaked grille, rear bumper and headlights, as well as exclusive front fog lights which form a chequered pattern in the front bumper. 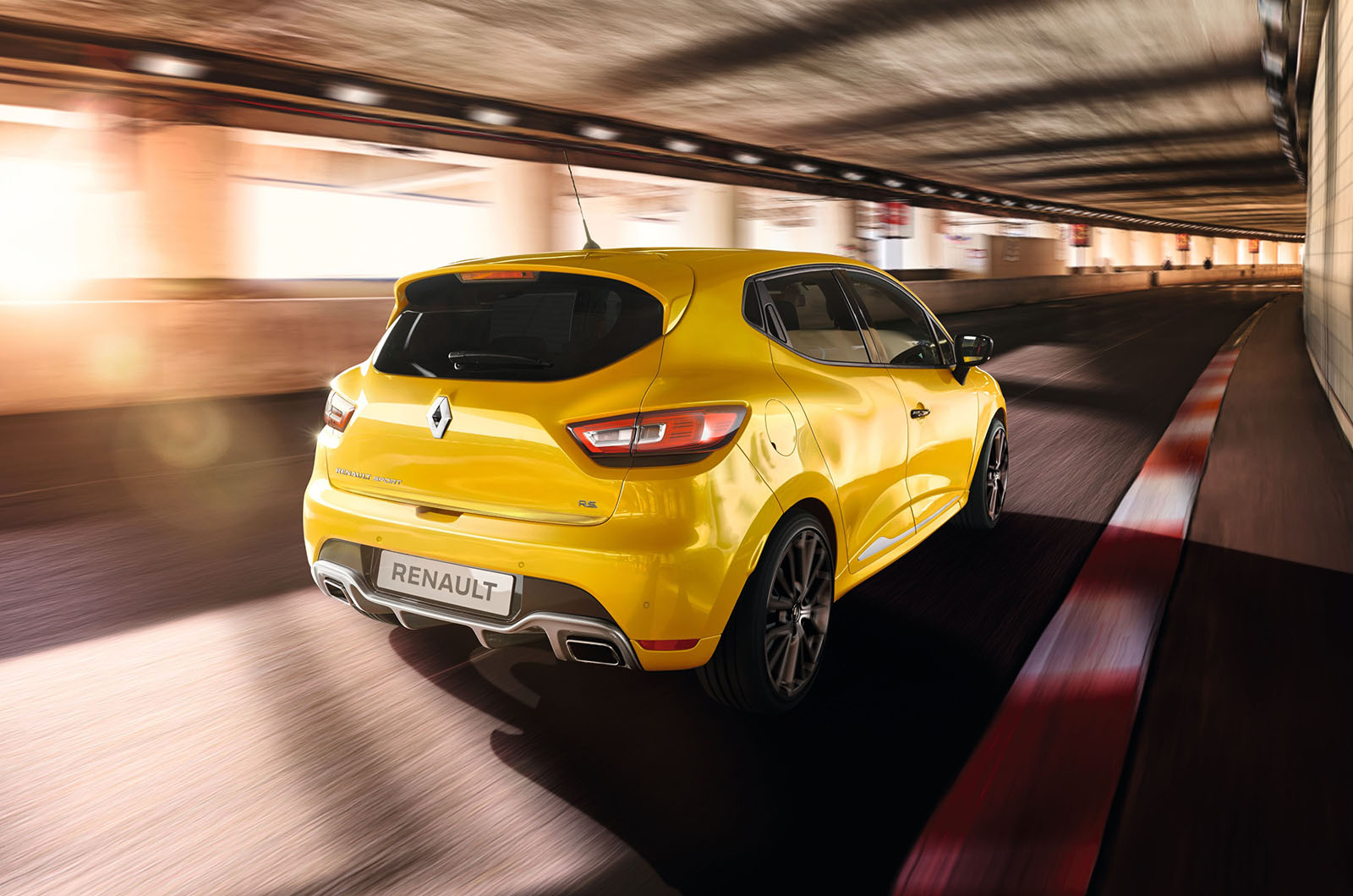 Being the Clio’s motorsport variant, the facelifted Clio RS also plays host to a raft of mechanical upgrades. There’s a choice of three chassis options; Sport, Cup and Trophy, which reflect increasing levels of track-oriented focus, with Sport being the most road-friendly.

The Trophy is the most hardcore of the three, so will be the least comfortable and more suited to track driving than Britain’s bumpy public roads.

The higher-powered engine is only available with the Trophy chassis, which lowers the front by 20mm and the rear by 10mm, with 18in alloys the only option available on this setup. A more advanced exhaust system is also available on the Trophy model as an optional extra. 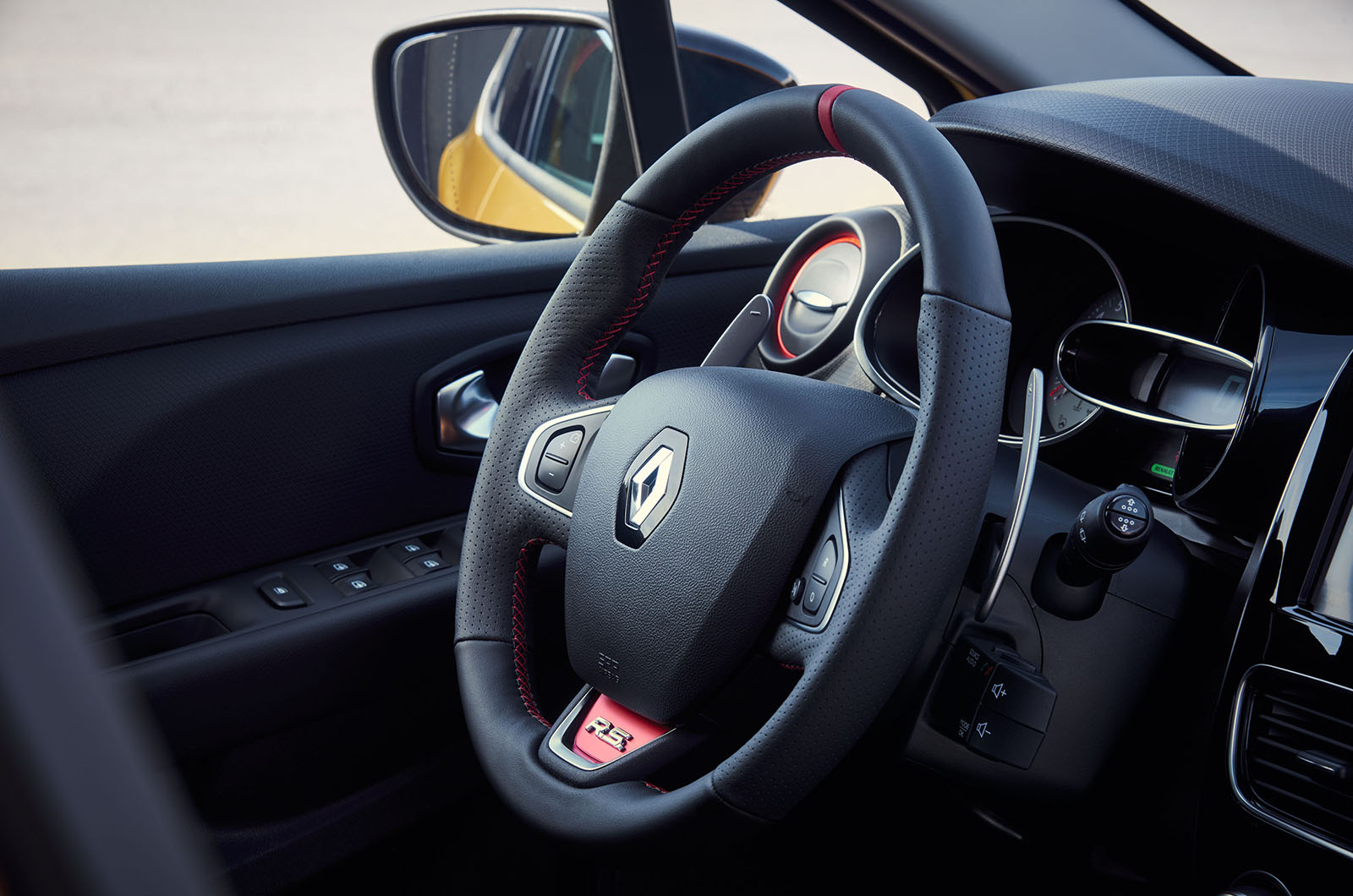 Along with the rest of the Clio range, prices are likely to make a small step up from the current-generation. The current Clio RS starts at £19,130 and rises to £21,780 for the 220 Trophy, so expect prices of the facelifted car to start around £19,500 and £22,000 respectively. All versions of the Renault Sport Clio will go on sale in October of this year.

As an owner of a RenaultSport Clio 200 I would avoid this like herpes; Renault will refuse to own up to of fix major inherent fault with the car leaving you with a mechanical nightmare....awful, awful dishonest company..there is no reason to expect this car is any different.
BriMarsh 5 July 2016

Any news on the MR166DT engine?

Any news on the MR166DT engine? Or more specifically, on the MR166DT's longevity? Widespread reports on US sites (in Nissan related posts I have read) of failed or failing timing chains. A bit like the VW 'dieselgate', a recall has been made in the USA but a similar admission is strangely absent in Europe. Of course, I realise this is not Autocar's remit, the world of cars over three years old, i.e.. outside the company car / private PCP deal and the two-hour-test-drive-in-the-south-of-France sphere . But the majority of drivers in the UK drive used cars, and rather than as a media studies, off-the-wall-editor lifestyle choice, this is done via necessity. Faced with a minimum £2k bill for a new engine after a sub-50k mileage, I think a lot of people will be interested. to know...
scrap 6 July 2016

Completely agree. As an

Completely agree. As an enthusiast's publication, Autocar should cater for the many thousands who buy a driver's car second hand. But the industry wants them to push new metal, so that's what they do. I have heard awful things about the previous gen Renault Sport Clio in terms of reliability - shame, as it is an enticing proposition.
Motormouths 5 July 2016

The gearbox on these is utter

The gearbox on these is utter crap, as are the fake engine noises that come out of the car's stereo. Shame really, because up until this generation the Clio RS was always a very good car. Now I would argue that it's by far the worst in its class.
View all comments (5)