BACK TO ALL NEWS
Currently reading: 2016 Porsche Panamera - first passenger ride
UP NEXT
Sorry, wrong number: the forgotten problem of car clocking

The all-new Porsche Panamera will make its public debut at the end of this year, but we've grabbed a ride during a hot-weather test in South Africa
Open gallery
Close

The next-generation Porsche Panamera is undergoing testing in the extreme heat and dust of South Africa ahead of its unveiling later this year - we've hitched a ride in a test car.

He isn’t kidding, either.

Read our review of the Porsche Panamera Turbo here

The G2 shares almost nothing with the outgoing car, save for the V6 engines. It not only rides on Porsche’s new MSB platform, but also comes with a new range of V8 engines and features a new ZF eight-speed gearbox, dubbed PDK II.

We’re sitting in a G2 Turbo, approaching traffic around Cape Town, South Africa. And it’s about to get very hot. 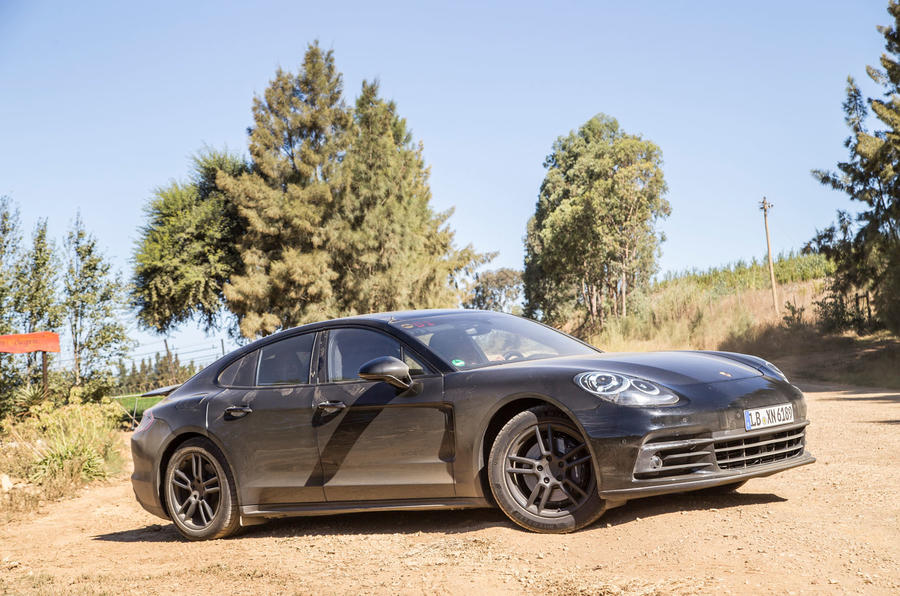 The radio crackles with instructions to shield the car’s interior from prying eyes and mobile phone cameras, so black foam-backed matting is hastily placed over everything, including the vents for the air conditioning.

This heat is why the cars are here. That, says Döllner, and the roads.

High temperatures, climbing altitude and some excellent (read poor) road surfaces make for perfect testing conditions. That it’s beautiful and, outside of town at least, relatively quiet is a bonus.

There are five Panameras here, development cars that had already covered millions of kilometres before they were shipped down to the Cape.

They’re here for some final hot weather calibration and then they will be packed up and air-freighted many thousands of miles north, where they’ll be tested at the other extreme of the thermometer’s range.

Such is the life of a production prototype and the people who accompany it. The team of engineers is a tight-knit group with more passport stamps than an airline pilot.

They travel the world in a constant process of testing, changing and retesting until they’re happy the car can be signed off. These five Panameras are very close to that point. 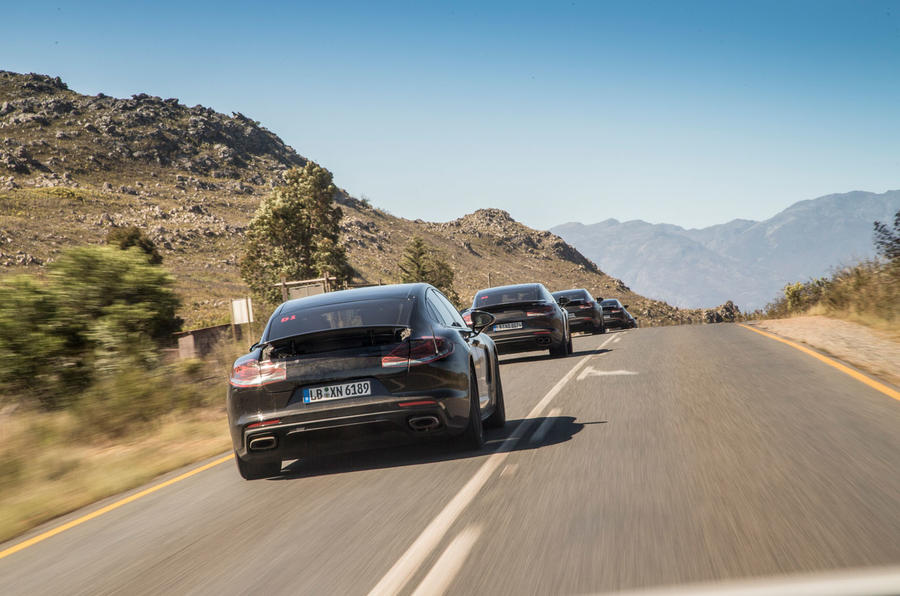 The two others are more base-specification models – a single-turbo petrol V6 and a V6 diesel.

They’re off limits today, but they’re clearly having little trouble keeping up with the brisk pace that Döllner and his team maintain. (There’s no hybrid here, because that’s due a little later in the product cycle.)

All the cars are disguised, but that’s hiding in plain sight; no amount of cladding is able to cover up the Panamera’s more shapely, elegant form.

The new dual-clutch automatic gearbox is common to every Panamera model and sits in exactly the same position in the new platform as the old one, even in the hybrid, where it’ll have a more powerful electric motor integrated within its casing.

There are expected to be two hybrids, with both diesel and petrol offered with battery assistance.

The new MSB platform facilitates this with its greater flexibility, enabling the addition of four-wheel drive for the diesel versions.

Every Panamera that exceeds 400bhp will come with four driven wheels. The eight-speed gearbox benefits from improvements in efficiency, with gains of around 30% over the G1’s PDK thanks to developments in the control pumps and a reduction in internal friction.

It changes gears quicker, too, and is rated to cope with all the torque that the new V8 diesel develops: more than 660lb ft. That V8 isn’t the 4.2-litre engine that’s in the Cayenne S Diesel.

Instead, it’s the 4.0-litre unit that also powers Audi’s new SQ7. Producing around 435bhp, it features an electrically powered turbocharger and will be added to the Cayenne range when it’s updated next year. 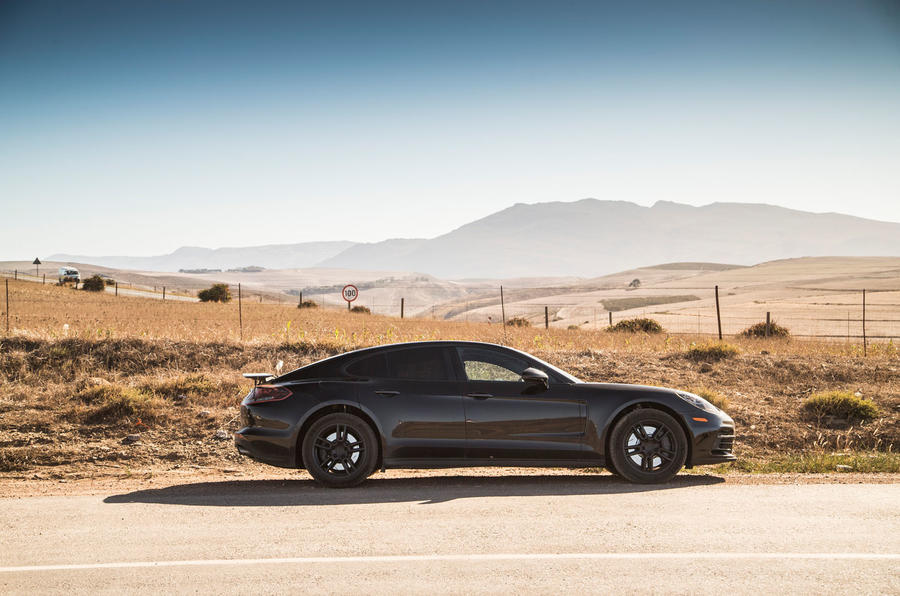 For a diesel, it has huge aural appeal. The engine note is very muscular, and it’s backed by an exhaust that’s equally engaging in its tone.

This is one diesel that’s no poor relation to its petrol range mates. The mighty diesel V8 is not the only example of shared technology within the VW Group that’s destined for the new Panamera.

The Porsche will have the same 48V electromechanical active roll stabilisation that made its debut on the Bentley Bentayga SUV.

The engineers are quick to point out that it’s a developed Porsche system, which, like the rear-wheel steering and air suspension, will be offered as an option.

The availability of such equipment requires the Panamera to feature faster, greater-capacity FlexRay control electronics, which allow the numerous chassis, transmission and engine control units to send and receive 100 messages a second.

That synchronous FlexRay system is also instrumental in allowing additional autonomous driving features now expected in this class, its speed being 20 times faster than that of the outgoing car’s system.

This has enabled the G2 Panamera to include Active Safe, incorporating lane keep assist, autonomous braking and ACC with InnoDrive.

This new system uses additional nav-based information, such as the gradient and radius of bends, to allow cornering of up to 0.70g without touching the accelerator.

In time, it’ll use car-to-x communication for greater detail, although it’s not all about speed.

Within the InnoDrive are various modes, and Eco allows the Panamera to deliver its best fuel economy for the prevailing road and traffic conditions.

Economy isn’t such a consideration with the Turbo, although its engine has dropped in capacity to sneak below the 4.0-litre tax threshold of various countries and a cylinder deactivation system lets it run on four cylinders when possible.

The turbos nestle in the V, allowing for quicker response and greater thermal efficiency.

Porsche claims economy has improved by 30% over the twin-turbo 4.8, but if you’re not chasing economy, Döllner says the Turbo can lap the Nürburgring “as fast as our previous super-sports car”. By that, he means the Carrera GT.

It’s not difficult to believe, given the performance. The V8’s force is relentless, and it’s accompanied by a gloriously uncouth note from the sports exhaust.

To do hypercar-rivalling lap times in a luxury sports saloon, you’ll need the Turbo to feature the optional electrically controlled differential as well as PCCB brakes.

Those brakes necessitate the option of 21in wheels, 20in being standard on the Turbo and 19in the entry-level size across the line-up.

The Turbo also benefits from standard air suspension instead of the steel-sprung PASM adaptive damping set-up elsewhere. The Panamera’s air suspension system is all new and the air springs have 30% greater capacity, thanks to a third chamber.

This allows more range between the various suspension settings, and Döllner admits that customers have asked for greater comfort from the suspension.

He says the engineers have achieved that “without sacrificing the Panamera’s position as the most sporting and highest-performing car in its segment”. 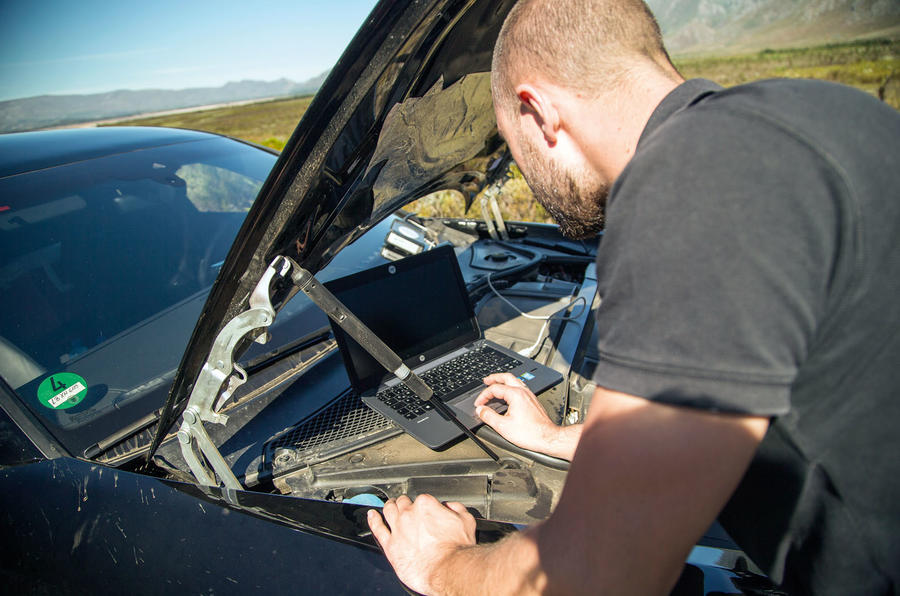 Certainly, all of the cars rode, from the passenger seat at least, with real composure, despite some UK-rivalling broken surfaces.

The steering, Döllner says, is only ever one ratio, despite the various driving modes, because “the steering is as it should be”.

Choose the rear-wheel steering (which improves stability and agility and reduces the turning circle by one metre) and you need the air suspension.

That’s also the case if you want the active anti-roll system, although Döllner says: “With the air suspension alone, there’s a degree of roll control within it.”

The stability systems offer various degrees of control. Döllner grins when he says that in Sport mode during winter testing, the Panamera will happily sit at a 45deg angle on a skid pan.

Despite the significant increase in technology and safety equipment, there has been little or no increase in weight.

The detailed work to keep the mass down includes the use of aluminium in the bodywork, engine blocks (with the petrols) and even the wiring loom, although the structure is largely steel.

Overall, the body is around 30% stiffer than the G1 Panamera, which benefits both dynamics and refinement.

In conjunction with improved stiffness and the benefits that brings, Porsche has worked extensively on the packaging. Döllner admits that access to the luggage space on the old car was an issue.

The opening to the boot is now a far more useful shape and boot space has increased by 50 litres, helped by the way the rear pop-up spoiler has been engineered in the bootlid.

Passenger space is improved, too, with more head room, thanks to a lowering of the H-point by about 10mm and a slight increase in the wheelbase.

The roofline has dropped at the back, to the benefit of the Panamera’s looks, but the lower seats offset that and the interior feels far more spacious than before.

Access to the rear seats is also easier, which will be surely appreciated by anyone who has ever clambered in the back of the current Panamera.

The instruments and infotainment are vastly improved; Porsche’s typical rev counter-dominated instrumentation is supplemented by screens with customisable information on either side, and a central touch and button-operated main screen.

It’s a significant advance on the outgoing G1. Perceived interior quality – excepting the odd patchy, pre-production part scattered about the cabin – has been raised, too.

Customers will benefit from what has been learned here in South Africa, too.

On production cars, the air-con fan will be quieter on its fastest setting, there will be less road noise and some suspension tweaks, and the finer aspects of the eight-speed PDK’s controls will be recalibrated to reduce a degree of driveline shunt that’s sometimes apparent in traffic – the same traffic that caused the heat and necessitated that air-con fan to run at full tilt.

There’s method in this global testing madness and every drive helps to make the Panamera as good as it can be.

As Döllner says: “The Panamera fits into a very specific niche and that’s where we have to stay.”

It looks like that’s exactly what they’ve achieved, while making it faster still, more efficient and with greater refinement. 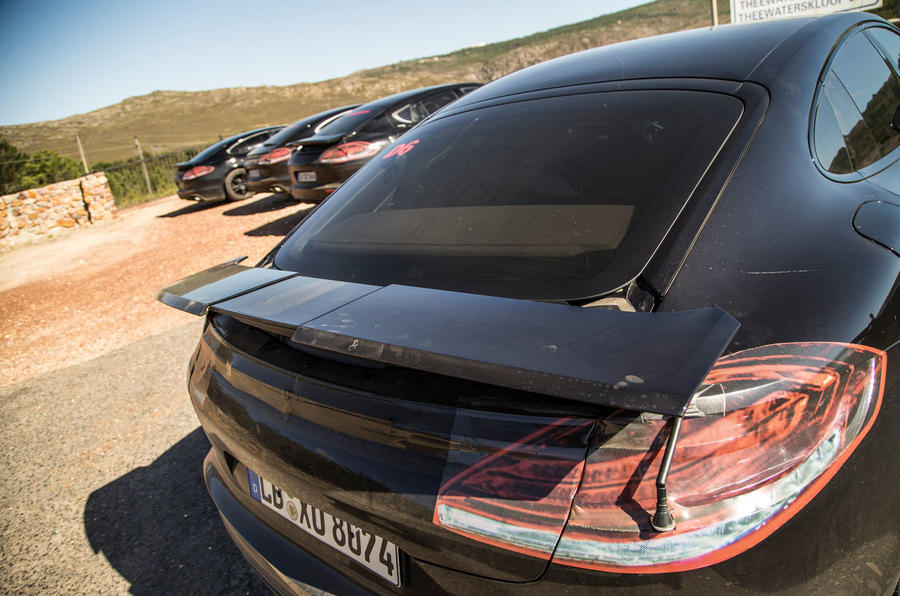 "We’re exploring other avenues,” says Gernot Döllner when discussing the possibility of further models based on the Panamera’s MSB platform — specifically the shooting brake hinted at by the Sport Turismo concept that wowed the Paris motor show in 2012.

Certainly, disguised cars have been spotted of a model that would be a rival to cars like Mercedes-Benz’s CLS Shooting Brake rather than genuine load haulers.

The flexibility of the MSB platform also means an extended-wheelbase Panamera will be offered, much like today’s Executive. The often-rumoured 928 replacement based on Panamera underpinnings remains that: a rumour.

Such a project is likely to be limited by Porsche’s ability to find time in its engineering schedule for it, and any possible convertible spin-off, even if there’s demand for it.

I’ve looked at the Panamera on 3 occasions and until 3 seat in the back I’ll keep buying something else. It’s not rocket science, give buyers a choice of two or 3 seats in the rear and sell so many more... BMW M5 and others keep getting bought instead. This is like BMW not bringing in 4WD until Audi have run riot through their customer base...
FrownyFace3000 27 May 2016

...for this car. Everything I read here has really pumped me up too! It seems that power levels in the Turbo and Turbo S haven't gone up, though...
cousinbillybob 26 May 2016