BACK TO ALL NEWS
Currently reading: 2015 Mazda 2 – full pricing, specifications and gallery
UP NEXT
Lotus confirms new sports car, end of Elise, Exige and Evora in 2021

The Ford Fiesta rival is the fourth Mazda to fall under its well received SkyActiv technology banner and Kodo design language, after the CX-5, 6 and 3. Japan will get the car first from the autumn, with production due to start soon at the firm’s plant in Hofu, near Hiroshima.

The supermini segment is still Europe’s largest, and Mazda is pitching the new 2’s “performance, fuel economy, safety and driving fun” as a “winning combination”. Insiders have previously said it would be lighter, more agile and more frugal than the current 2.

Buyers have a choice of a 16-strong model line-up, which are powered by Mazda's latest range of EU6-compliant SkyActiv engines. Three 1.5-litre petrol units are offered, in 74bhp, 89bhp and 113bhp form. The most economical of those is the 89bhp version, with average fuel consumption of 62.8mpg while emitting 105g/km of CO2.

The 103bhp 1.5-litre diesel variant is the most efficient motor in the entire range; combined fuel economy is reputed to be 83.1mpg, with CO2 emissions of 89g/km.

The new 2 uses a new chassis and body built to the firm’s SkyActiv technology principles of being lightweight and rigid. The base model weighs in at 1045kg, with the heaviest model, the diesel, clocking in at 1115kg.

Its underpinnings are understood to be a new SkyActiv structure that's smaller than that seen in the Mazda 3 and larger models. The downsized platform also features a lower-cost twist-beam rear axle, instead of the Mazda 3's multi-link rear.

Economies of scale for the new platform are achieved by the 2 being a global model, and one that will be twined with and built alongside a new Toyota supermini in markets such as North America.

The design of the new 2 has clearly been influenced by the well received Hazumi concept, which made its debut at the Geneva motor show in March. The look is evolved from that of the CX-5, 6 and 3, and also the Hazumi.

Indeed, apart from new headlights, wheels, door mirrors and door handles, the Hazumi was the new 2.

The exterior styling of the car is reputed to have been a collaborative effort, led by Japan with input from Germany and California.

Five trim levels are available on the small family hatchback, from the entry-level SE up to the range-topping Sport Nav. Prices climb to £17,395 for the SkyActiv 1.5 diesel Sport Nav.

Fitted as standard across the Mazda 2's model range are a variety of safety features, including dynamic stability and traction control, electronic brakeforce distribution (EBD) and hill-hold assist. 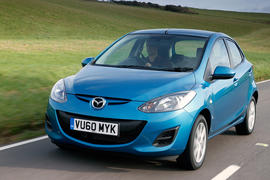 It may just be a matter of personal like but I do like Mazda for keeping the larger of the two petrol engines and offering it in different states of tune. Just like the bigger CX-5, 6 and 3, the petrol offers impressive economy for its capacity - rivals rely on much smaller engines and blowers to offer the same and consequently fail to get anywhere near official economy figures.
topsecret456987 4 November 2014

I have seen this screen on

I have seen this screen on the next Gen MX5. What if someone does not own a smart phone and will never buy one?

Empty tablet that can't do anything is left sprouting out of the dashboard, and no radio/apps?

What a cracking looking car,

What a cracking looking car, lovely interior too. Certainly shows GM the way to build an appealing supermini.
View all comments (24)