BACK TO ALL NEWS
Currently reading: SRT Viper GT3-R revealed
UP NEXT
Mazda to launch own version of new Toyota Yaris by 2023

Developed by Riley Technologies - the same team behind the Viper’s return to the GTE Pro class at this weekend’s Le Man 24 Hours - the SRT Viper GT3-R uses an 8.4-litre V10 developing 680bhp.

The SRT Viper GT3-R will cost customers $459,000 (£297,000), competing against cars such as the Audi R8 LMS, Nissan GT-R Nismo and Porsche 911 GT3 R in the FIA GT3 and United SportsCar Racing GT Daytona classes. Chrysler is currently taking orders for delivery late this year, with testing beginning in August.

While the new car shares its suspension and bodyshell with the Le Mans-spec Viper GTS-R car, its engine is left mechanically unchanged to that of the road-going SRT Viper. The SRT Viper GT3-R also benefits from lightweight wheels, a multi-disc race clutch and an Xtrac six-speed sequential transmission. Paddle shifters are preferred to a more traditional stick.

Designed to be robust and relatively inexpensive to run over a season, the GT3-R project was reportedly customer driven, and the car has been designed to closely resemble the road-going SRT Viper.

Chrysler hasn’t disclosed production volumes for the GT3-R yet, but says that one has already been sold. 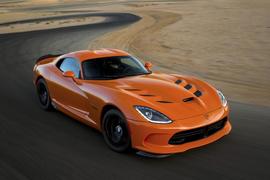 The SRT Viper TA is a track-orientated version of the Viper for those mad enough to test their limits with a 640 bhp, 1538kg American supercar

Thank you for posting such the fabulous information about cars. And it's informative and educational at the same moment. It deserves to be written about for

https://educatingessays.co.uk/ if you don't mind of course. And keep doing the great work!

Yes, i haven't driven one, because.......it costs too much,but, having seen a few at shows road and race, yes the race ones are a bit tatty,but that's because they've been raced,the road efforts?,well lets just say a pound coin didn't touch the sides,now for a car that costs so much this side of the pond, that's not acceptable, i don't know what your daily driver is evile@,but, you wouldn't accept panel gaps like this, would you, no matter how well it drives,heritage alone doesn't make great car.