BACK TO ALL NEWS
Currently reading: Gordon Spice Racing Ford Capri driven at Goodwood
UP NEXT
Fisker goes radical with Pear EV SUV

In the 1970s Autocar sponsored Gordon Spice Racing’s Ford Capris. One car is back in action and we asked BTCC ace Andrew Jordan to test it
Open gallery
Close

The Ford Capri is one of those iconic automotive designs. In its various forms, the fastback brought sporting coupes to the masses in the UK and almost two million were sold between 1969 and 1986. But some Capris are more special than others.

Gordon Spice and his line of three-litre V6 versions dominated the British Touring Car Championship (or British Saloon Car Championship as it was then known) in the second half of the 1970s. The idiosyncratic nature of the scoring system, which allowed class winners to record the same number of points as outright victors, meant Spice never won the overall championship, but six class titles and 26 wins underlined the combination’s impact on the Group 1 era of tin-tops.

Genuine ex-Spice Capris are rare, so the return of one at this weekend's Goodwood Members' Meeting is not to be missed. And the fact that the car he took to six successes in 1979 was also sponsored by Autocar (see sidebar) meant we had to be there for its comeback. Historic racer Mike Whitaker is the latest owner of a car that has had a busy life. After Spice used it in 1979-1980, chassis CC10 (named after preparers CC Racing Developments) found its way to Brian Chatfield. He planned to race it in Group A – Group 1’s replacement – but moved to Modified Saloon racing when it became apparent the Capri was no longer competitive. Next owner Colin Woodcock also raced it in Mod Saloons so that, by the time it arrived with Capri aficionado Dave Thomas, it had sprouted various appendages.

The next owner, period racer Martin Thomas, was key. “Martin started buying old Group 1 cars when they were worth £15-25,000, including the Capri,” explains Whitaker, who paid rather more for it (over £90,000) at last year’s Silverstone Classic auction. “It was a risk-free bet.”

Thomas started to restore the car as Group 1 racing gained momentum, helped by the Gerry Marshall Trophy headlining the Goodwood Members’ Meetings. Once the glass fibre wheelarches and other Mod Saloons paraphernalia had been removed, the original Spice machine started to reappear, including the red paintwork.

“Originally Martin was going to get it ready for last year’s Members’ Meeting, but he didn’t make it,” adds Whitaker. “He’d got two Rovers as well and decided the Spice Capri would sell. But he returned it to its Group 1 glory.”

Nevertheless, Whitaker decided to get CC10 taken apart and put back together by Nigel Reuben Racing, complete with Ric Wood-prepared V6: “Despite buying a restored car, I handed it to Nigel and got him to strip it down and completely rebuild it because I want 10 years out of it.” The Spice cars were always a little special and there were a few giveaways – like the non-standard centre console – that confirmed it was genuine and the end result is spectacular. “It’s lovely to see it,” says Spice as he arrives at an early March Goodwood test day to be reunited with his old racer.

But it’s not Spice who is going to drive it. Andrew Jordan, 2013 BTCC champion and active historic racer, is on hand to give Autocar an insight into what a 35-year-old touring car feels like. He’ll be campaigning a front-wheel-drive Motorbase Ford Focus in the BTCC this year, a car quite removed from the rear-wheel-drive Capri, but he appreciates the history.

“I knew about Gordon Spice and his cars,” says the 26-year-old. “For me, you’ve got Super Touring [of the 1990s] and the other iconic touring car era is the Capris and Rovers – Group 1. They look amazing and sound awesome.”

Before he gets his chance, though, father and experienced racer Mike Jordan, who is sharing the car at the Members’ Meeting with Whitaker, takes it out for a brief shake down. “Do you want to sell it? It’s a delight to drive,” are Jordan Sr’s encouraging words as he brings the car back. And then the heavens open.

It’s probably just as well the 290bhp, 1035kg Capri is on Goodwood-specified treaded historic Dunlop tyres, rather than slicks, as Andy climbs in. 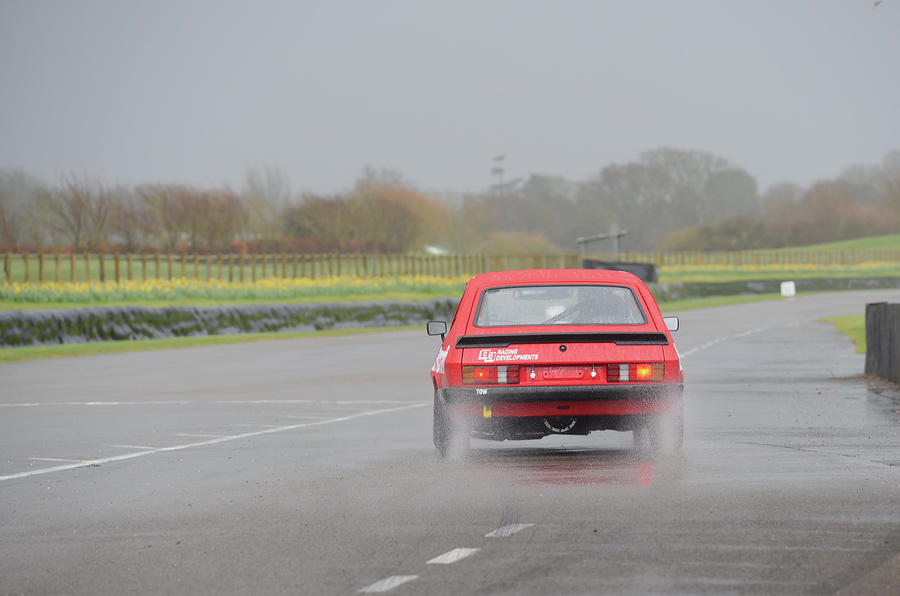 “It’s quite basic inside in comparison to touring cars these days, but I don’t think you should modernise cars like this,” says Jordan Jr, who has also raced a Lotus Cortina and Group 1 Mini at Goodwood. “I agree with increasing safety, but you want everything to look period. With a Gordon Spice car you don’t want to get rid of what it was.”

Once out on track, Jordan quickly gets into the swing of things and thoroughly enjoys hurling the Capri around.

“It’s a hoot driving a car like this in these conditions and the V6 sounds awesome in the car,” he beams on his return. “It feels strong and torquey.

“Compared to this, the new cars feel claustrophobic. And the biggest difference is grip level. The grip of a modern-day car compared to these sorts of cars is massive. But you can steer the Capri on the throttle and it’s very easy to handle.”

How Gordon Spice did a deal with Autocar

Plenty of drivers won races in Ford Capris, but Gordon Spice, who was contracted to the Blue Oval, was the king. Once the big V8 Chevrolet Camaros had been banned at the end of 1975, Gordon Spice Racing moved to the forefront of the BTCC.

“Each year the Capri got a bit better because Ford was quite good at homologating the bits we needed,” recalls Spice, who ran the cars under the Gordon Spice Racing banner. “It was a very, very easy car to drive – that was the secret of it. It was almost idiot-proof. You could drive it any style you wanted.”

By 1978, Spice had proved himself capable of attracting backers too, and came up with an idea that got Autocar on board. “I thought it would be a good idea to have a motoring magazine to get publicity for the other sponsors,” he says. “It was more about the exposure than the actual sponsorship, which I think was quite small, and it was an enormous benefit.”

It must have worked for Autocar too, because that evocative red livery was still on the Spice Capris when he took his final class crown in 1980.

A new Capri to that formula

A new Capri to that formula would effectively be a GT86, and I can't see Ford being able to make a car like that better or cheaper than Toyota. The GT86 hasn't sold well in the UK, and I don't think there is a mass market for cars like this over here any more (unlike the USA). Like the estate car, it's all disappeared into the world of front-drive hatches and jacked-up SUV type things. Shame, cause it's a format I like.
Bob Cholmondeley 19 March 2016

Ford how about making another Capri. Joint development with Mazda for their RX-8 replacement. Starting at say £17k rising to £27k for the fully loaded one. Could even do a diesel for the company car drivers. A properly done 2+2 with a half decent size boot, so the kids can get in & the holiday junk.
Never know it may catch on. Just prioritize the rear wheel drive, as a complete difference from the bloody SUV Garbage we have now.
You never know it may catch on.
Bob Cholmondeley 19 March 2016

Ford how about making another Capri. Joint development with Mazda for their RX-8 replacement. Starting at say £17k rising to £27k for the fully loaded one. Could even do a diesel for the company car drivers. A properly done 2+2 with a half decent size boot, so the kids can get in & the holiday junk.
Never know it may catch on. Just prioritize the rear wheel drive, as a complete difference from the bloody SUV Garbage we have now.
You never know it may catch on.

That seems like a good idea but, starting from £17? No chance.