BACK TO ALL NEWS
Currently reading: Like father, like son? An interview with Mick Schumacher
UP NEXT
Fisker goes radical with Pear EV SUV

It is perhaps inevitable that the junior Schumacher should follow in the footsteps of dad Michael and tread a path towards F1. But, he tells Autocar, he wouldn’t have it any other way
Open gallery
Close

Silver spoon or tainted chalice? Blessing or curse? These are the searching questions every son of a famous father poses to his soul at some stage, mostly when inevitable comparisons with Daddy are aired, or when Junior knows he’s fallen well short of the expectations that come with the family name.

This year Mick Schumacher has cause to ruminate: he has been competing in Formula 2 for Prema, a team with an illustrious history in the series. From 20 starts, the 20-year-old son of seven-time F1 world champion Michael scored top 10 finishes on eight occasions, including claiming a maiden win in the sprint race in Hungary.

On the flipside, the 2018 European Formula 3 champion failed to score 12 times, a tally that includes five retirements, mainly through errors. A mixed bag, then, yet this personable and polite young man is nonetheless a member of the Ferrari Driver Academy (FDA), having turned down offers from the Mercedes F1 Team to join its junior programme – the path his father trod 30 years ago. 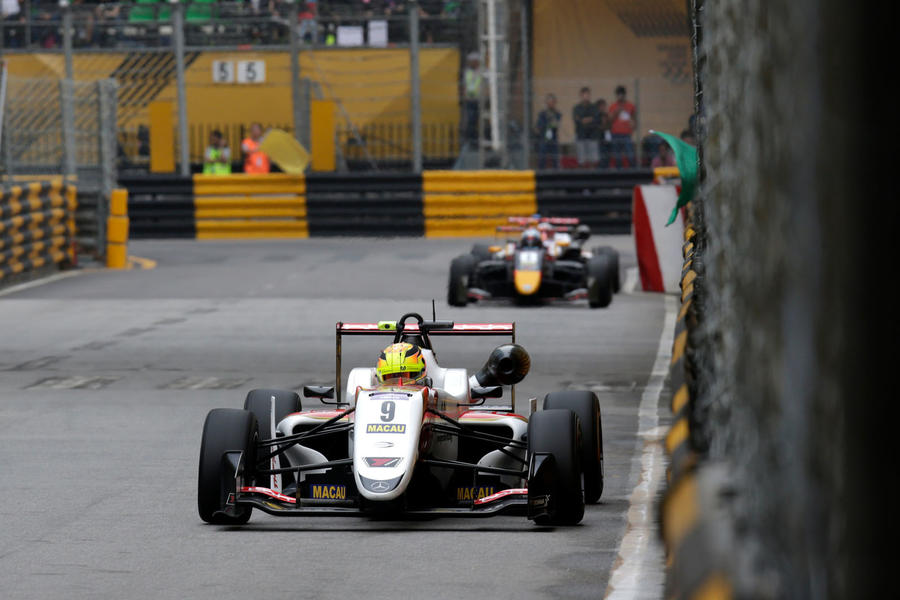 So far, so different, yet there is absolutely no doubt his father’s genes run deep, as considered responses to questions posed between laps in Ferrari’s F8 Tributo at Fiorano – the circuit at which M Schumacher Sr clocked upwards of 50,000 miles annually in his quest for driving perfection – make clear.

Mick’s earliest memories of Ferrari’s test circuit, situated a stone’s throw from the legendary gates to motoring utopia, are of thrashing a 50cc motorcycle around the grounds while his father sought yet another sliver of lap time.

“It’s amusing,” grins Mick. “We’re sitting where I used to watch my father driving around, and today I’m driving a Ferrari road car. The last time I was here, I rode my motocross bike.”

“That’s my memory of Fiorano,” he says, adding that photographs show his first visits were as a babe-in-arms, then as a toddler. “I’ve seen photos of myself in thick jackets, suggesting they were taken during winter testing.” 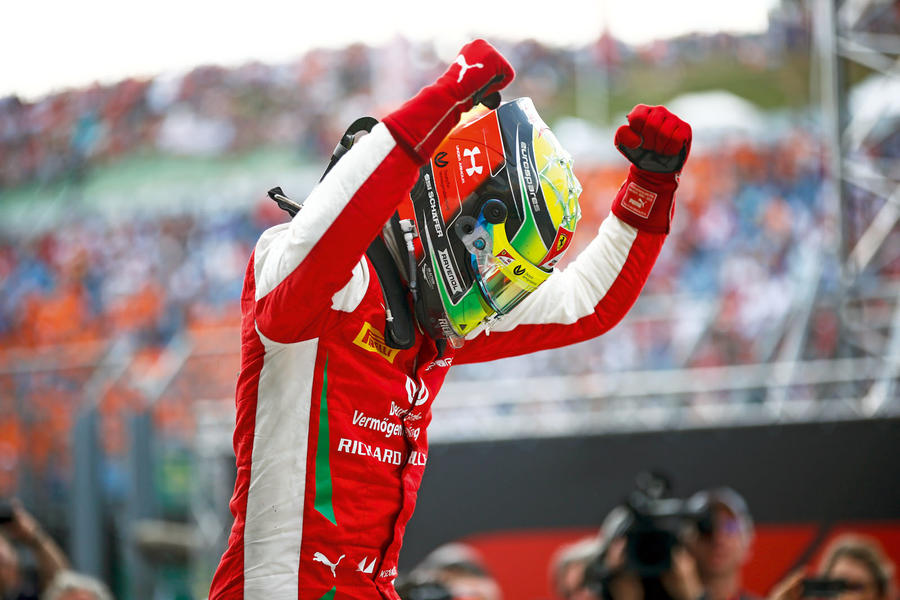 He recalls, too, the Montana restaurant across the bridge, where “Oma Rossella” – chef and (grand) mother figure to generations of Ferrari drivers – served him pasta. Back then, testing was, of course, effectively unrestricted, so Fiorano was his father’s second home, yet today Mick is driving the circuit for the first time, in a road car as part of the Tributo’s launch programme.

“Testing is prohibited, so it [usually] makes little sense to lap in a road car when I could be in the simulator, which is more productive,” says Mick.

That said, he is clearly enjoying the Tributo, saying it feels more like a heavy race car than a road car, adding that he finds the shift lights on the steering wheel helpful and the seamless power delivery out of the twisty bits equally enjoyable. 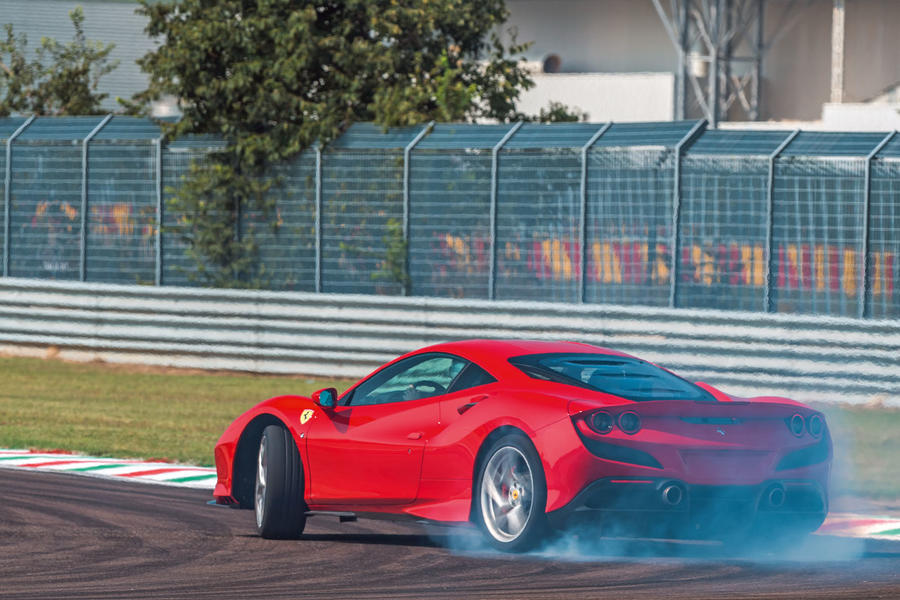 “I’ve accelerated out of most corners in third gear; usually they are second-gear corners,” he enthuses. “I’m impressed with how the motor pulls from low revs, and the speed the car carries through corners.

“I’m able to lean on the front wheels and pour on power, which would usually result in understeer. Normally you’d have to wait until the car is pointing straight ahead before flooring it, but with this one I’m able to carry speed into the corner, turn in and accelerate.

“I have the ESP and traction control off… and play with Race and Sport modes.”

Mick confesses to having dreamed of driving a Ferrari as a youngster, and not any Maranello product but a 458 Italia – developed with input from his father: “I sense my father’s DNA in every Ferrari, and that makes me extremely proud.”

Is that why Mick accepted Ferrari’s offer rather than join the Silver Arrows, with which his father ended his second F1 career?

“It’s to do with history,” he says slowly. “I feel drawn to here, I grew up here and with the exception of one season – Van Amersfoort in Formula 4 – I’ve driven for Italian teams. In karting I drove for Tony Kart, and with Prema I’m with an Italian team. 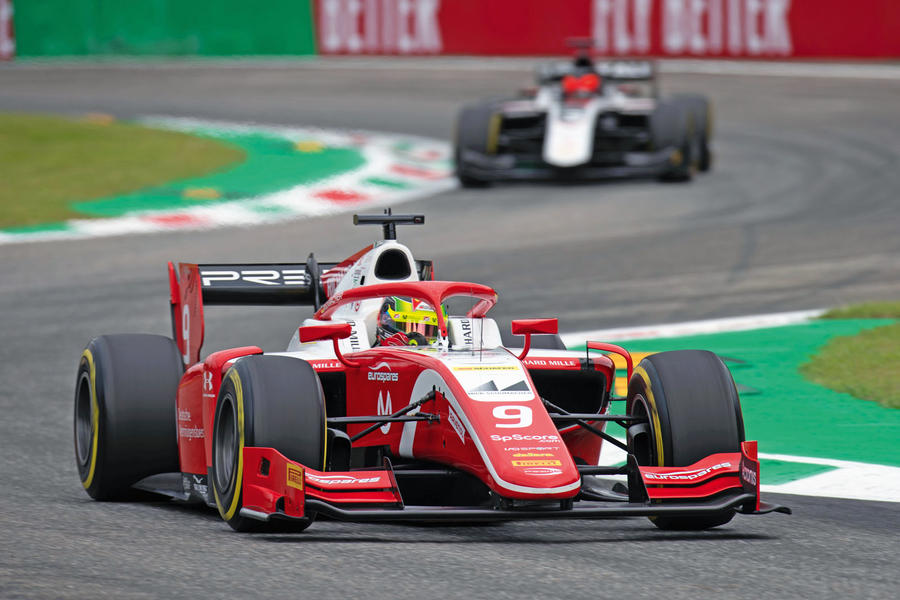 “The passion [Italians] have for motorsport is wonderful, and it is equally discernible at Ferrari. It’s special to be in Maranello.”

He admits to being in Maranello “as often as possible, learning tricks and tips that help me in Formula 2, which is close to Formula 1”, and believes membership of the FDA makes him a better race driver: “It can’t be described or expressed in numbers, but it’s like being part of a big family – the Ferrari family.”

Equally, he feels a strong affinity to the last German world champion, Sebastian Vettel, whom he considers a mentor. “Just as my father was mentor to Sebastian, so Sebastian is my mentor,” Mick says. “Someone I feel connected to; with whom I regularly talk motorsport. I respect him enormously, and of course he has more than a few years’ experience on me.” 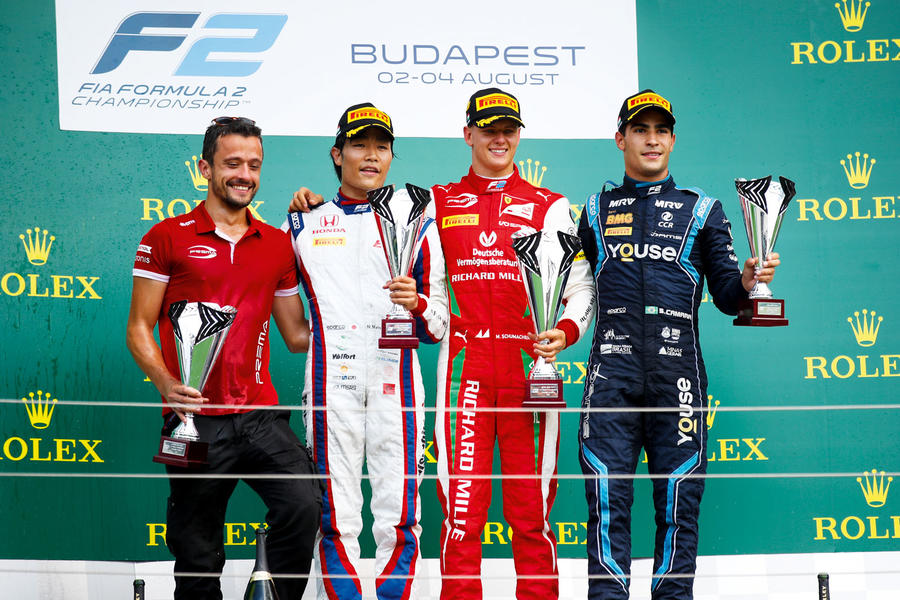 Talking of which, does Mick realise how revered the name Schumacher is in F1, and, in particular, in Germany? Does he not feel enormous pressure? “No, I mean… I’m Mick. And I love this sport. That to me is the most important thing.”

His father’s love for things automotive is legendary, so how does Mick, a Generation Z-er, view cars, which are fast losing favour among his peers? “It’s difficult to explain,” he admits. “Obviously they take you from A to B, but depending upon which car you’re in, you get different sensations when driving from A to B.

“It makes a difference, whether I’m driving a Fiat or a Ferrari. Obviously I’d rather drive a Ferrari, doing 300km/h, but that’s not permitted. That is a passion, and one reacts according to the car one is driving.” 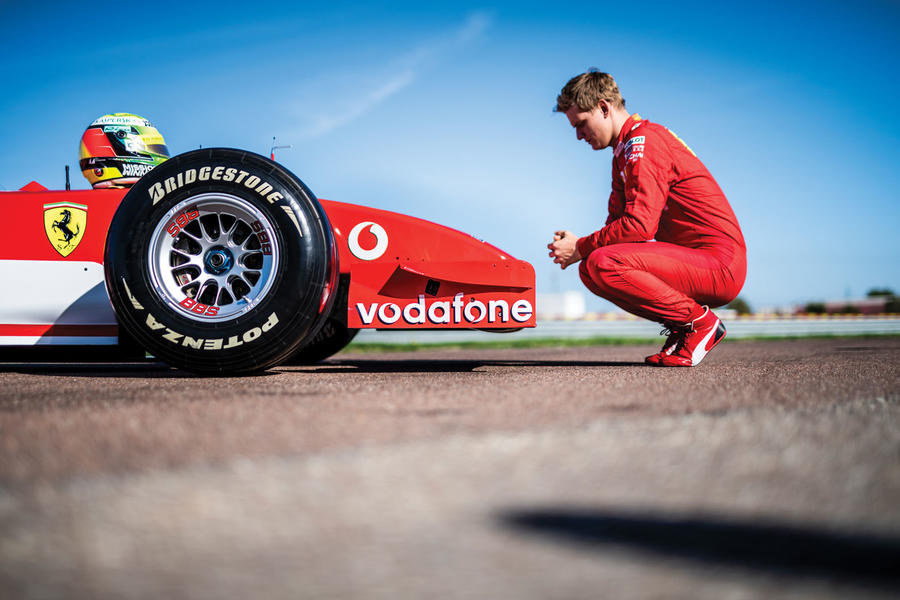 Having referenced the Ferrari 458, it is blatantly obvious that Mick is a true-red petrolhead, but could he be tempted to try electric vehicles? “Not on the race track,” he says flatly. So his approach to racing is very much of the old school, technically?

“Yes!” he says to that. “I love taking my kart to the track, tuning it. Carburettor off, carburettor on, swapping needles for optimum performance. With naturally aspirated engines, you are much closer to it and able to visualise how to make it faster. Turbos are more complicated, because you have boost pressures and bits and bobs that need computers rather than using your hands.”

Like his father, who simply loved lapping, whether during racing or testing, Mick is fascinated by finding the limit, and admits to occasionally going beyond that fine line.

“In order to drive fast, you constantly need to be on the limit, and sometimes even over it,” he says seriously. “To be right on that point, for the entire lap, then do it over and over again. You know when you’ve given your all, and it’s addictive.”

In closing, did the son of Michael Schumacher have a Plan B, one to remove him totally from motorsport? Or was his career preordained?

“Funny you should ask,” Mick grins. “I discussed this with a friend, and we decided to each choose a make-believe job that did not involve engines. I simply could not find one. Everything had to do with engines, and always will. “Plan B? Plan A works fine for me…” Like father, like son.

The legacy of Michael Schumacher

Seven world titles, 91 race victories, 68 pole positions: these are just highlights of the magnificent achievements of Michael Schumacher’s time in Formula 1. Today – despite the here-and-now fashionability of Lewis Hamilton’s achievements – he still stands by many measures as being the greatest racing driver of all time. 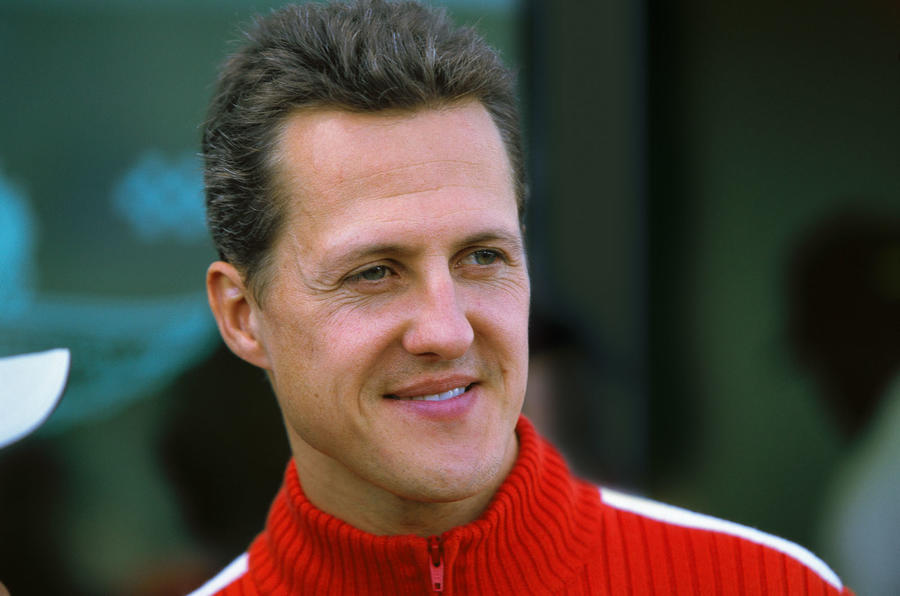 Beyond the statistics, Schumacher could electrify a grand prix even when the odds were against him. The soaking wet 1996 Spanish Grand Prix is widely regarded as his greatest race, so superior was he as he scythed up from sixth after a poor start to ease effortlessly away from everyone at a rate of two to three seconds a lap.

Then there was the 1995 Belgian Grand Prix, where he started 16th and made title rival Damon Hill look decidedly second best as he went on to win, his victory constructed around a delicacy on slicks in the wet that nobody else could live with. Or Spain again, in 1994, when his car jammed in fifth gear early on, yet he still came second. Or Hungary in 1998, when Ross Brawn switched him to a three-stop strategy that in effect required him to drive race-long qualifying laps without a single error. He duly won.

Yet no assessment of Schumacher can overlook his blemishes, chief among them the ruthless, win-at-all-costs attitude that put Hill in the wall in Adelaide in 1994, just as the Briton was about to slip into a title-winning position, or which led to him (unsuccessfully) ramming Jacques Villeneuve in Jerez in 1997 as the Canadian was overtaking his (again) mechanically stricken car to secure a world-title-winning result.

Today, of course, for all the advantages Michael’s achievements, reputation and financial resource have given his son, they also stand as the greatest millstone around his neck. 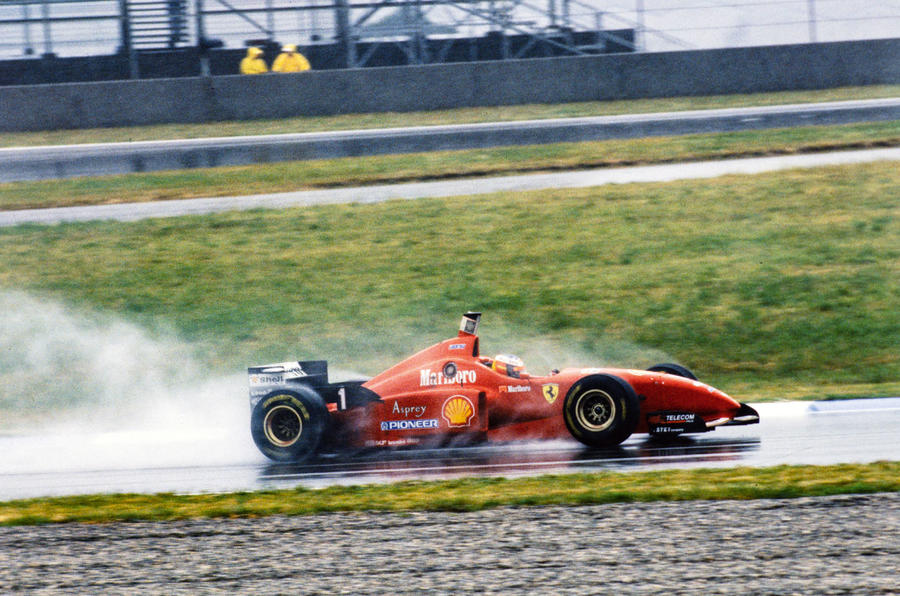 At least for now, then, perhaps the fairer, more realistic goal for Mick would be to consider not the 15-and-a-bit seasons in which Michael scooped his titles and accolades, but rather the three at Mercedes that many fans would prefer to forget. For some, Michael’s results made him look like a mere mortal, although keeping future world champion Nico Rosberg honest in the twilight of his career looks ever more impressive with hindsight.

The point, though, was that this maturer, more balanced version of Michael Schumacher was delighted just to be there, racing again at the very highest level. Insiders say his time away from F1 proved to be impossibly hard for a man who simply craved the sensation of driving fast – so much so that he kept hurting himself falling off superbikes.

For all his success, he remembered just what a privilege it was to be an F1 driver. He looked all the more human for it, too. For every Hill and Villeneuve there are a dozen ‘sons of’ struggling to break through. If Mick Schumacher is happy to look to his father for inspiration, then simply having the opportunity to prove himself at the highest echelon is probably achievement enough for now. Jim Holder

The original interview was conducted by Motorsport Magazine, and quotes are used with permission.

Goodwood Festival of Speed 2019: best of the Schumacher celebration

Does that mean he'll cheat and drive dangerously, just like his dad did?

Of course we'd like to see him in F1,but, he's not going to get an automatic seat at Ferrari, he might start in an Alfa for instance, I hope he succeeds.....