French green motorsport outfit GCK Motorsport is working on a new version of the hydrogen-powered e-Blast off-roader that it has showcased as part of this year’s Dakar Rally, and which demonstrates how fuel cell technology can be applied to performance cars.

The GCK e-Blast 1 has been driven on select sections of this year’s route for the endurance rally raid event in Saudi Arabia in order to showcase the capabilities of hydrogen technology for motorsport. Drawing from both an electric battery and a hydrogen stack, the machine produces 335bhp and up to 738lb ft of torque, with a top speed of 112mph.

GCK Motorsport, which was founded by Dakar competitor Guerlain Chicherit and competes in the World Rallycross Championship, has now begun work on an e-Blast H2, with the aim to optimise the electric motor to boost output to 402bhp. The firm is also aiming to reduce the battery pack capacity from 150kWh to 60kWh to reduce weight, adding a new cooling system for faster charging. 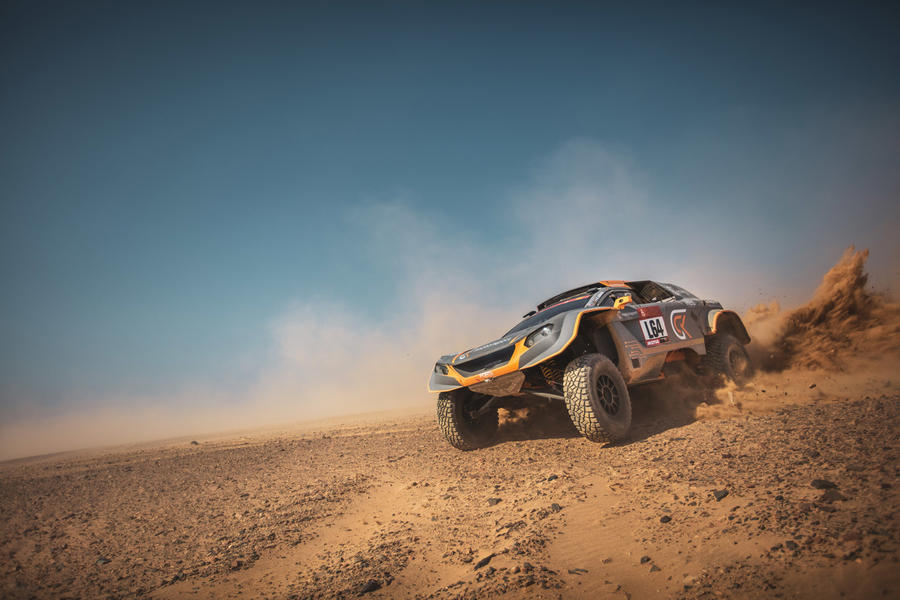 The revised machine will also feature a new hydrogen fuel cell, which will be powered by 25kg of 700-bar hydrogen and will deliver 161bhp. The firm says it is “collaborating with a major player in the industry” on the technology.

Alongside the e-Blast project, GCK Motorsport’s parent firm, Green Corp Konnection, is working with Dakar Rally bosses to increase the event’s use of ‘green energy’. It has helped to develop a ‘green bivouac’ for this year’s event, which is powered by 630 solar panels that can produce 1.2MW daily, and features electric vehicle charging.

The ASO, which organises the Dakar, is aiming to run a fully autonomous bivouac by 2024, and wants all race vehicles to be powered by green energy by 2030.

GCK Energy also won the tender to supply electricity and charging infrastructure to the new electric World Rallycross categories from this year onwards.

Audi is currently evaluating a hydrogen-powered Dakar Rally entry for the future.

Sand of opportunity: Prodrive on its Dakar rally racer

Log in or register to post comments
ac555 12 January 2021
I'm confused.. if you have a hydrogen fuel cell, why lug a massive battery around?

Surely you only need a small battery for regen breaking?