BACK TO ALL NEWS
Currently reading: WRC: Croatia Rally goes down to the wire
UP NEXT
How a sat-nav can make you faster around a track

Toyota driver Sébastien Ogier emerged victorious from the inaugural Croatia Rally this weekend, following an intense three-way fight with team-mate Elfyn Evans and Hyundai’s Thierry Neuville, which went all the way to the final corner of the final stage.

Ogier had carved out a hard-won advantage by Saturday night, but the rally was turned on its head on Sunday morning when a BMW driver recklessly ploughed into Ogier on the road section to the first stage. Incredibly, the Yaris WRC stood up well to the impact and the rattled Frenchman was able to continue, but with damage that cost him time.

Evans took over the lead, but went wide on the last corner of the rally-closing Power Stage – which meant that Ogier eventually won by just 0.6sec, after 20 stages.

Croatia marked the first proper asphalt rally since August 2019, with variable grip and corner-cutting that dragged stones and gravel onto the road being a crucial factor. Tyre choice was also important, with temperatures often being higher than expected and rewarding those who selected the harder compound.

Although the rally ended with a one-two for Toyota courtesy of Ogier and Evans – with the Frenchman now also moving into the championship lead – it started off in the worst possible way for the Japanese squad, after championship leader Kalle Rovanperä crashed out on a slippery corner on the opening stage while running first on the road.

Ogier almost went off at the same corner, knocking a tyre off the rim in the process. Neuville then pulled out an early lead following Rovanperä’s retirement but was chased down again on Friday afternoon by Ogier and Evans, as Ogier took a hat-trick of stage wins: including the 600th of his career. 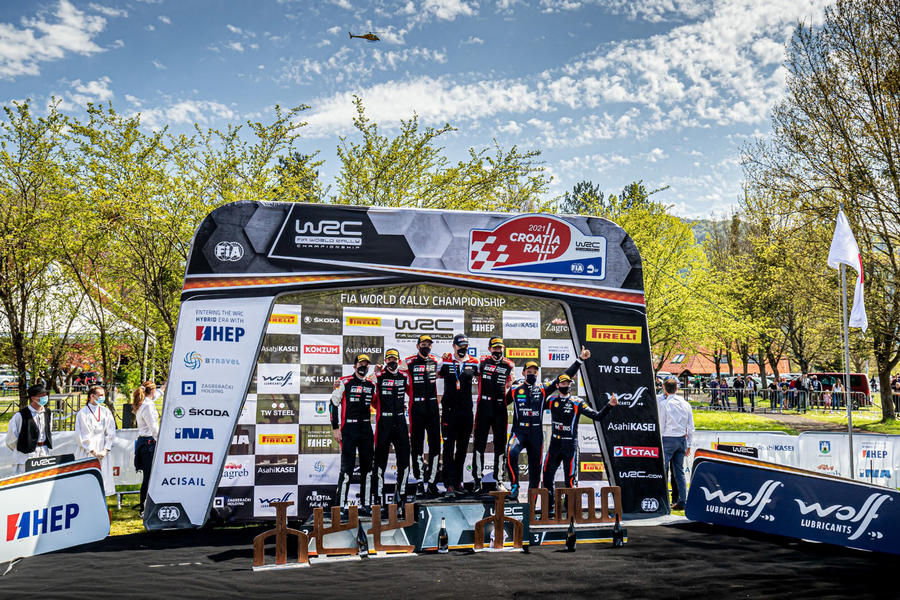 Hyundai’s Ott Tänak finished a distant fourth, nearly a minute and a half off the lead battle after a wrong tyre choice, while Adrien Fourmaux was impressive on his M-Sport WRC debut, finishing fifth despite an off-road excursion on Sunday morning that cost him a minute.

It was also the best rally to date for Toyota’s Japanese protégé Takamoto Katsuta, who finished sixth but more importantly claimed the first two stage wins of his career on Saturday, having dropped time on Friday.

M-Sport’s Gus Greensmith was seventh on his debut with new co-driver Chris Patterson, while Hyundai’s Craig Breen struggled to find confidence on his first asphalt WRC outing in a World Rally Car since 2018, ending up eighth ahead of Mads Ostberg, who won the WRC2 category in the factory C3 Rally 2.

The WRC3 class, for privateer Rally 2 cars, was claimed by multiple European champion Kajetan Kajetanowicz in a Skoda, while Britain’s Chris Ingram – another former European champion – was fifth in the class with a similar car on his WRC3 debut.

The Junior World Rally Championship for two-wheel-drive cars had its opening round of 2021 in Croatia with Britain’s Jon Armstrong taking his first victory aboard the M-Sport Ford Fiesta Rally 4.

How rallying is more than just sport for Sébastien Ogier