Porsche claimed a record 19th outright victory in the 24 Hours of Le Mans, in a gruelling race in which all five works LMP1 machines suffered major problems.

The trio of Timo Bernhard, Brendon Hartley and Earl Bamber topped the podium in their Porsche 919 Hybrid, despite seemingly dropping out of contention when they were forced to pit due to a motor generator issue in the fourth hour. 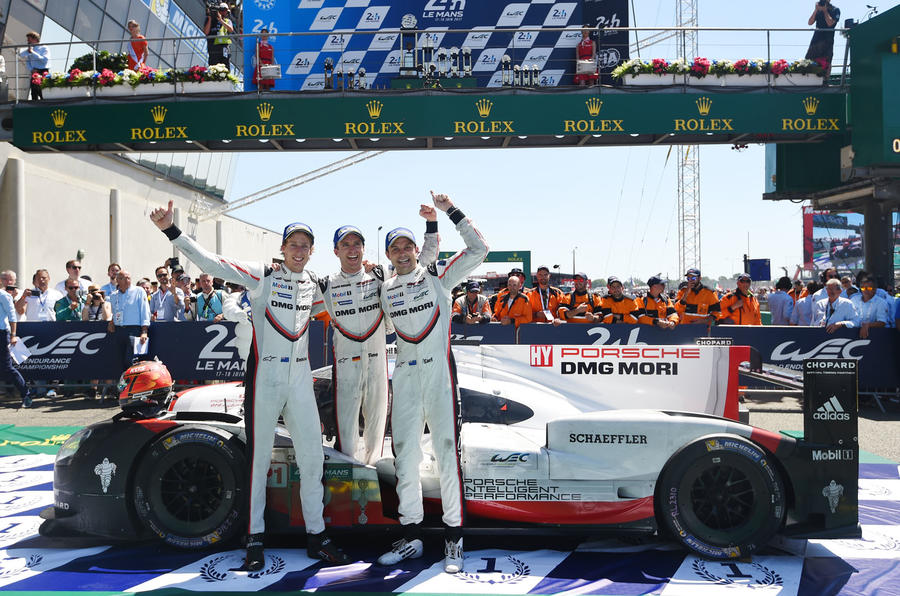 But they moved back into contention as the other works Porsche and Toyota prototypes hit trouble. The #7 Toyota TS050 Hybrid of Mike Conway, Kamui Kobayashi and Stéphane Sarrazin dominated the early portion of the race, until being sidelined by a clutch problem in the tenth hour.

The 24 Hours of Le Mans - by the numbers

The sister #8 machine of Anthony Davidson, Sébastien Buemi and Kazuki Nakajima had already fallen out of contention by that point, losing 29 laps after having to pit to replace the front motor and battery.

Toyota’s challenge then crumbled entirely. 15 minutes after the #7 car’s retirement, the third TS050 Hybrid suffered terminal damage after a clash with an LMP2 car.

Toyota’s misfortunes handed the #1 Porsche of André Lotterer, Neel Jani and Nick Tandy a massive lead - but with less than four hours to go that machine was sidelined by an engine problem.

That set up a dramatic finish, with the second-division LMP2 Jackie Chan DC Racing ORECA of Ho-Pin Tung, Oliver Jarvis and Thomas Laurent assuming the lead, but being chased down by the recovering #2 Porsche. 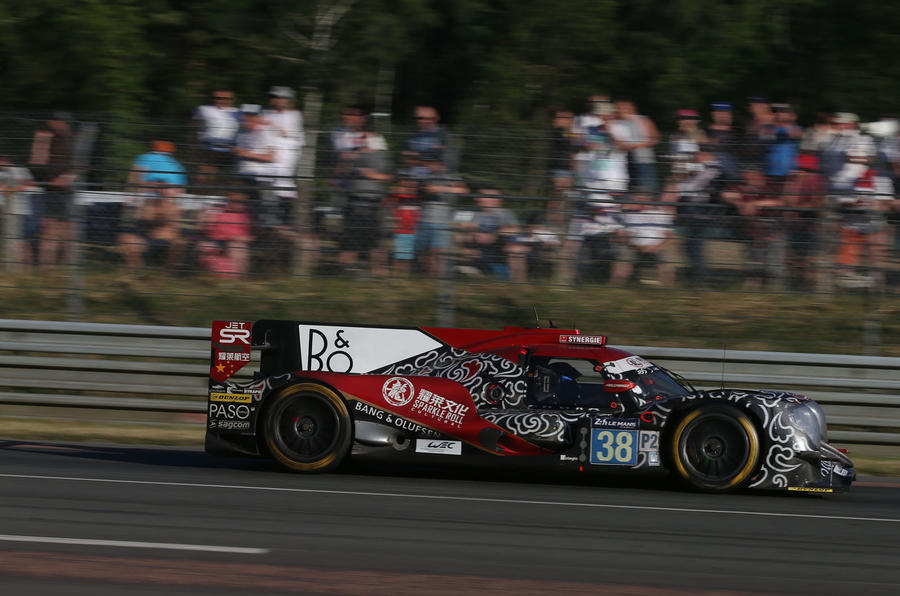 The faster LMP1 Porsche eventually regained the lead with just over an hour to go, and held on to the finish. Second place for the Jackie Chan ORECA was still the highest-ever finish by an LMP2 car. Fellow LMP2 runners Nelson Piquet Jr, David Heinemeier Hansson and Mathias Beche finished third overall.

Aston Martin clinched a dramatic victory in the GTE Pro division, with the #97 machine of Jonathan Adam, Daniel Serra and Darren Turner snatching the lead on the final lap.

The #97 Vantage had started from pole, but after a close race was forced to chase fown the #63 Chevrolet Corvette of Jan Magnussen, Antonio García and Jordan Taylor in the closing stages. The battle was only settled when the Corvette picked up a puncture coming as it crossed the line to start the final lap.

That puncture also cost Chevrolet second, with the Ford GT of Harry Tincknell, Andy Priaulx and Luis Derani also going past on the final lap. 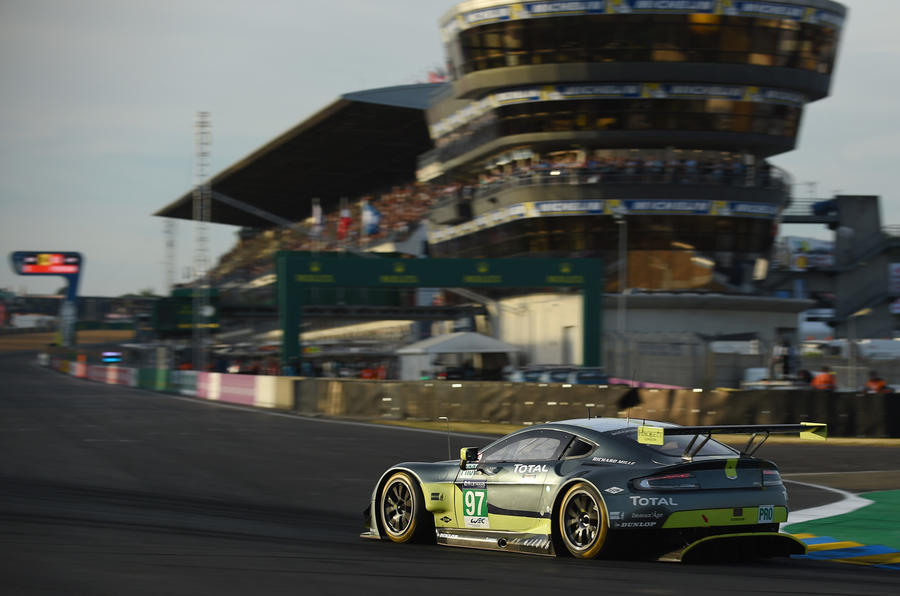 Former F1 racer Will Stevens, Robert Smith and Dries Vanthoor claimed victory in the GTE Am division in the JMW Motorsport Ferrari 488 GTE.

What is the fix for LMP1?

Only a few years ago LMP1 was being touted as the motorsport class to be in for car companies, especially when Audi, Porsche, Nissan and Toyota all participated. But since Nissan left after a disastrous Le Mans in 2015, LMP1 has been waning. Ok, Audi left because of dieselgate and the VW Group couldn't sustain the huge cost of having two marques in the top class of the WEC, but no-one other car company is showing a real, dedicated interest in joining the series. We're left with two car companies in LMP1 which makes the WEC look a bit weak and this was exposed at this year's Le Mans 24hrs.

Instead manufactures are being attracted to Formula E and Formula 1 while many privateteers are reluctant to join LMP1 (as opposed to LMP1-H) because they just know they'll be uncompetitive against the factory teams with their hybrid cars while the pace of the current LMP2 cars doesn't help either. LMP1-H is massively expensive, right on a par with F1 but sportscar racing needs to retain a class that is the pinnacle of motor racing technology and development alongside F1.

Perhaps stating that all LMP1 cars and/or just the powertrains must also be available as customer items might help. Ok, a LMP1-H car isn't going to be exactly cheap but buying one of the shelf will mean a team may not have to spend millions in design, R&D and manufacturing. Allowing hybrid engines to become available to privateers may mean they'll have cars that could well be on the pace as the factory teams - if F1 allows customer engines, why not the WEC? And for non-hybrid engines currently in LMP1, change the rules so their power can be right up their with the hybrid cars while it'll mean teams that can't afford expensive hybrid engines will at least have a competitive alternative. At the moment a non-hybrid team in LMP1 is around 300bhp-400bhp down and it shows.

The winning Porsche ran virtually faultlessly for 18 hours after being repaired, when it returned to the field stone dead last. Same with the sole Toyota, after it was repaired, it ran with no other massive gremlins and give a an hour more it'd probably have got 2nd place.
voyager12 19 June 2017

Get rid of the prototype categories altogether

The LMP1 category is a joke. And I don't see the attractiveness of the LMP2 category with just one engine and three types of chassis. Keep the GT cars, and divide them between factory-endorsed and private entries. In the 60's the The Ford GT was considered a prototype, now it's merely one of the contenders in the two GT classes. This way more car brands will feel tempted to participate. Think of Lamborghini Huracan, McLaren 720S, Mercedes AMG GT, Nissan GTR, Audi R8 and the new Toyota Supra.
View all comments (6)