BACK TO ALL NEWS
Currently reading: 2015 Bonhams Aston Martin Works Sale gallery
UP NEXT
Volkswagen ID 3 vs Nissan Leaf: Battle for the EV top spot

The auction, carried out at the Aston Martin Works facility in Newport Pagnell by Bonhams, featured 50 classic Astons and 170 items of automobilia.

"The quintessentially British marque of Aston Martin attracts interest from enthusiasts across the world, a fact demonstrated here today as we took bids from all corners of the globe," said Tim Schofield, Bonhams UK head of motor cars.

A stunning 1966 Aston Martin DB5 Convertible in Vantage specification just nudged ahead of the '62 DB4 in the highest sale price stakes, however, commanding a final price of £1,524,700.

"The market demonstrated that there is a ready appetite for exceptional examples, even for models that had previously been regarded as not particularly fashionable. The result we achieved for a Virage Coupé illustrated this, with £74,300 realised for the 6300-mile 1990 model," added Schofield.

Among the more affordable lots was another 1990 Virage Coupé. It was in excellent condition, in part thanks to having just 40,000 miles on the clock, and sold for £23,000 including premiums.

The sale also gave visitors the chance to explore the Aston Martin Works facility, while owners' cars participated in displays around the venue. The new Aston Martin Lagonda was also on display, alongside the previous generation of Lagonda. 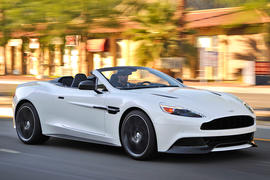 I'd have a kitkar testarossa.

Some really cool cars there

I can see a lot of classic

15 May 2015
I can see a lot of classic Aston Martins including the one like what James Bond drove in the past beside the most loved Classic DB5, other like the DBS. I seen the new Lagonda limo with classic Lagonda. It does have a little of 007s itineraries. But was not just James Bond also Aston Martin had appeared in other movies like Italian Job 2003 Recent Fast & Furious 7. I wish I could been there myself.