BACK TO ALL NEWS
Currently reading: 2015 Mazda CX-3 European debut in Geneva - full pricing and specs
UP NEXT
Nissan will build batteries in UK to sustain Sunderland plant

Mazda is taking on the Nissan Juke with a new compact crossover that will go on sale in June priced from £17,595 to £24,510
Share
Open gallery
Close
Share story

Mazda is gunning for the Nissan Juke, Renault Captur and Vauxhall Mokka with the new CX-3 crossover, making its European debut at the Geneva motor show.

The CX-3 draws heavily on the recently launched Mazda 2. It retains many of that car's styling cues, having a similar cabin and using one of its engines. However, unlike the 2 and almost all of the new baby SUV's obvious rivals, it is available with a choice of front-wheel or four-wheel drive.

The new model looks like a natural mix of the latest generation of 2 and its larger stablemate, the CX-5. It features blacked-out C-pillars that are designed to make the roof appear as if it's floating, as well as prominent plastic wheel arch cladding that's more reminiscent of the CX-5. In addition, it gets the 2's prominent front grille, crisp surfacing along its flanks and slim tail-lights.

The CX-3 uses the same basic platform as the Mazda 2, while its 2.57m wheelbase is the same. However, it features 10mm longer front and rear overhangs, a taller front firewall and a 50mm higher driving position. As a result, it is considerably longer (by 21.5cm) and slightly taller (a 5.5cm increase).

The new model also shares 80% of its parts with the new Mazda 2 supermini, a high proportion that shows how sophisticated engineers have become in spinning new variants off humble hatchback platforms. "We have worked hard on commonality, but also making the two versions very different," CX-3 project manager Michio Tomiyama said.

Mazda has carried over the suspension from the Mazda 2, while beefing up the rear twist beam axle and cleverly modifying the lower arms of the supermini’s front struts to give a raised ride height. The conventional, hydraulic power steering is carried over, too, albeit retuned to suit the soft-roader.

Strangely, Mazda will offer the CX-3 with only diesel power in Japan, positioning clean diesel as a competitor to petrol hybrids in the absence of a Mazda petrol hybrid powertrain.

The standard transmission is a six-speed manual, but a six-speed automatic is available with the lower-powered petrol and diesel engines. The four-wheel drive system gets the same torque vectoring technology we've already seen on the CX-5. It's standard on the diesel auto CX-3 and optional on all other models.

The interior design is close to the 2's. It has the same slim fascia architecture and a 7.0in colour touchscreen that is controlled by a dial between the front seats, and which is able to offer sat-nav and internet-streamed services. The new model gets the same range of safety technology as well, including a lane-departure warning system, blind spot monitoring and city emergency braking. 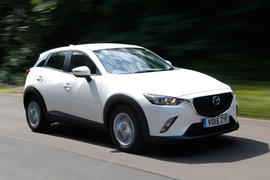 "We know there are new premium entrants coming and we will position the CX-3 against premium rivals, not entry-level competitors," said Jeremy Thomson, Mazda UK boss.

Stylish, well made, reliable and really good value. I think this will tempt a lot of people away from other brands.
Cyborg 21 November 2014

Nice but not as pretty as Mazda's other current models.
jer 21 November 2014

They mean it's based on the 3

Not the 2. I suppose. Confused the hell out of me, but it looks great. I wonder if kids will be able to see out of the rear.
View all comments (16)