BACK TO ALL NEWS
Currently reading: Toyota iQ city car reborn as China-only Singulato iC3 EV
UP NEXT
How the Bugatti Chiron became the first 300mph road car

The Toyota iQ city car has been reborn in China, with the rising Singulato firm using it as the basis for a new electric-only iC3 machine that has been launched at the Shanghai motor show.

Beijing-based Singulato was founded in 2014 as an EV-only firm, and is gearing up to launch a mid-size iS6 SUV later this year. It has agreed a deal with Toyota to use the eQ, a limited-run electric version of the iQ that was sold in the US and Japan, as the basis for its iC3 city car. Singulato has pitched its car as an “urban dream cruiser”.

Besides switching from combustion engines to an EV powertrain, the iC3 is built entirely with iQ parts, including the chassis, brakes, steering and suspension. It also features some mild exterior design tweaks, and a new, bespoke infotainment system.

Singulato has developed its own electric powertrain for the new model. While it has yet to reveal full technical details, it claims it will offer a range of around 186 miles on the NEDC test cycle. It is understood Singulato is aiming to sell the car in China for about £11,500.

A Singulato spokesperson told Autocar that it bought the iQ design from Toyota for a “nominal cost”, as part of a wider agreement between the two firms. Reuters has reported that Toyota will be given preferential rights to purchase Chinese ‘green car credits’ from Singulato, which will help it meet government quotas in the country.

Toyota recently announced it was offering rights-free access to around 24,000 patents, including those for electrified technology, and has been looking for partners to further its electrification and expansion plans.

The iQ was revealed at the 2007 Frankfurt motor show and went on sale the following year. It was axed in 2015 due to slow sales.

As well as the electric eQ version – sold in the US as the Scion iQ EV – Toyota developed a limited-run performance version tuned by Gazoo Racing.

The iQ was also used as the basis for the short-lived Aston Martin Cygnet city car, which was produced from 2009 until 2013. 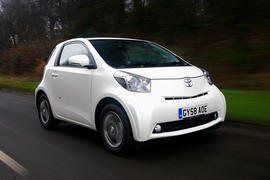 186 miles is a pretty decent

186 miles is a pretty decent range. More like a 120-135 in real world. I test drove the IQ, it was decent enough, but I ended up with a smart fortwo cdi in the end. There were too many things I didn't like about the iQ on the test drive

The quoted range is better than the Smart ForTwo EQ, which I tested but felt the price, combined with constant range anxiety, was just too much for me to cope with. I still like the IQ which was, at best, a three seater and I still regret not buying a Cygnet for under £20k a year or two ago. Seeing what they're selling for now, I could have made serious profit!

Love the iQ (but not the

Love the iQ (but not the Aston pimped up version). It is probably Toyota's / Lexus's most coherent and brilliant designs, mixing simplicity with delightful details.

There are still loads of IQ's

There are still loads of IQ's running around my local area and in typical Toyota fashion they appear to be lasting very well. Maybe Toyota should consider re-introducing it here as an electric only version.