BACK TO ALL NEWS
Currently reading: Mercedes-AMG GT Roadster, GT R and GT C Roadster: prices and specs
UP NEXT
Hyundai i10 EV successor primed for 2024 launch

The Mercedes-AMG GT Roadster pricing has been revealed, with the model set to cost from £110,145 for a standard car to £143,245 for the range-topping GT R coupé. Both were revealed at the Paris motor show earlier this year.

The range-topping GT R coupé is aligned directly with the McLaren 570S coupé; its £143,245 price tag undercuts the McLaren by just £5. Deliveries are not expected to begin until April 2017.

Options on the entry-level GT Roadster and GT R range-topper include the Premium equipment pack, which at £4195 brings keyless entry and go, a reversing camera and stainless steel door sills as well as heated seats on the GT R, a £3895 carbonfibre package, £395 yellow seat belts and £7500 for the GT R launch car's metallic green paint.

Semi-autonomous driver assistance tech is also optionable, with a £595 package that adds lane keeping and blind spot assists, while the £1695 Driving Assistance package adds adaptive cruise control and a pre-safe system that prepares the car for an accident if an imminent collision is detected.

Sporting the styling updates unveiled on the 577bhp GT R back in June, the GT Roadster features AMG’s distinctive new 300 SL Panamericana inspired grille, which receives an altered shape and vertical chrome bars instead of the earlier blade treatment seen on the GT Coupé. 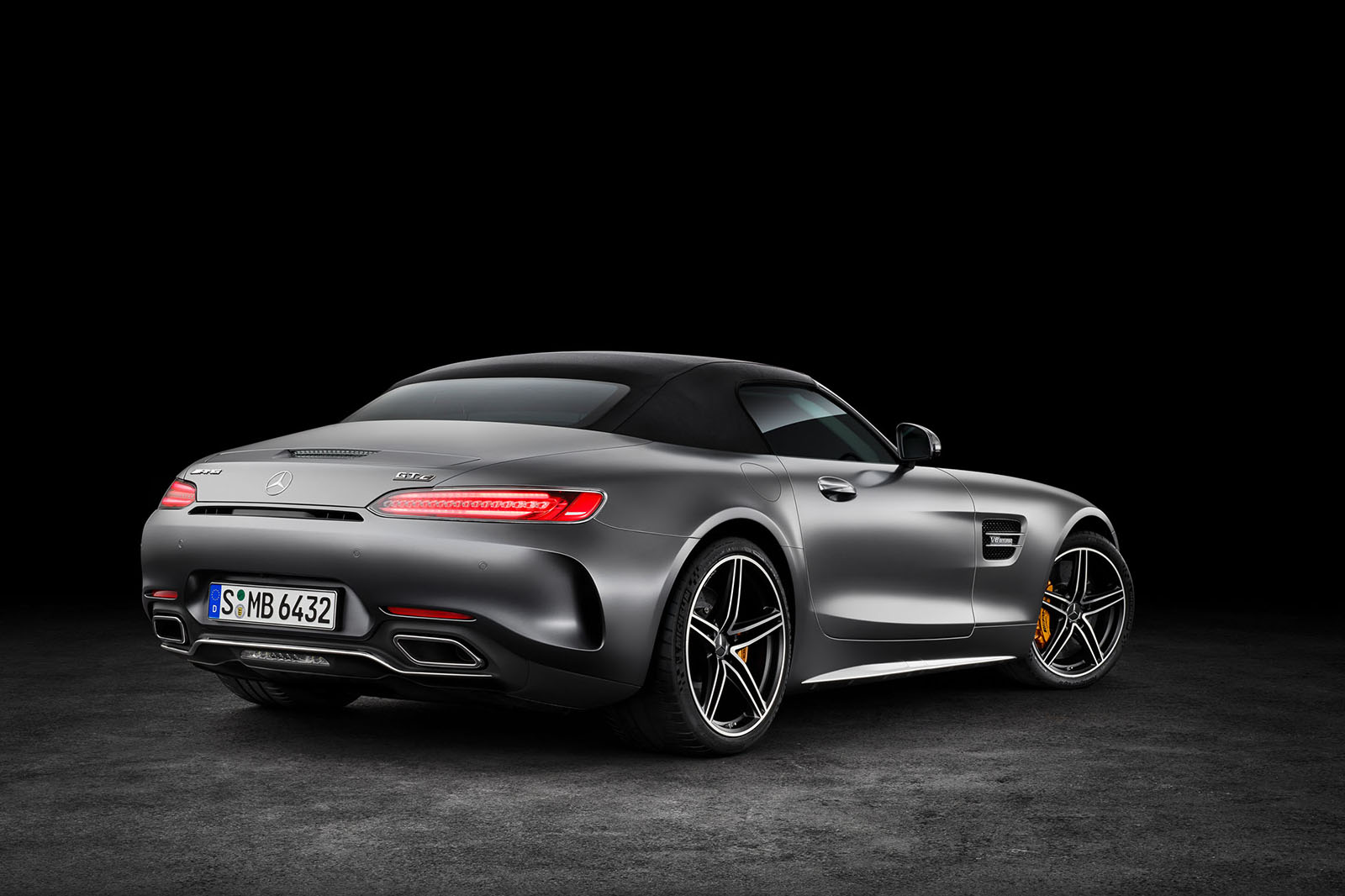 To ensure more efficient cooling of the engine and improved aerodynamic properties, the GT Roadster also adopts the active air management system that was first seen on the GT R. It uses a series of vertical louvres within the grille, which automatically open and close depending on the temperature of the engine to either enhance cooling or smooth airflow.

Further visual changes over the GT Coupé include a more defined splitter element in the lower section of the front bumper, larger air ducts and more defined sills underneath the doors.

At the rear, the two GT Roadster models differ in width due to the adoption of differing rear bumpers. The standard GT Roadster uses the same bumpers as the existing GT Coupé, while the GT C Roadster uses the 57mm wider bodywork of the GT R.  This allows the latter to run larger 20in rear wheels with 305/30 profile rubber as standard in place of the 19in rims and 295/35 tyres of the former.

As with its predecessor, the SLS Roadster produced between 2011 and 2014, the GT Roadster features an automatic fabric roof. The three-layer structure, which comes in either black, red or beige, is supported by a frame made from aluminium, magnesium and steel. It opens and closes in a claimed 11sec at speeds up to 31mph, folding and stowing over the rear bulkhead behind the two-seat cabin.

Offsetting the loss of a fixed roof structure is a stiffened the aluminium body structure with thicker sill elements, an additional dashboard support and a new aluminium crossmember supporting a fixed roll over bars.

Significantly, the GT Roadster packs greater reserves than the GT Coupé to counteract the higher kerb weight brought on by its electrically powered fabric roof and the structural stiffening measures required to accommodate it.

The third model in the GT line-up shares its twin-charged 4.0-litre V8 petrol engine with AMG’s headlining coupé. But while the 90deg unit delivers 456bhp in the GT Coupé and 502bhp in the GT S Coupé, its outputs have risen a respective 13bhp and 47bhp, giving the GT Roadster 469bhp and the GT C Roadster a heady 549bhp. 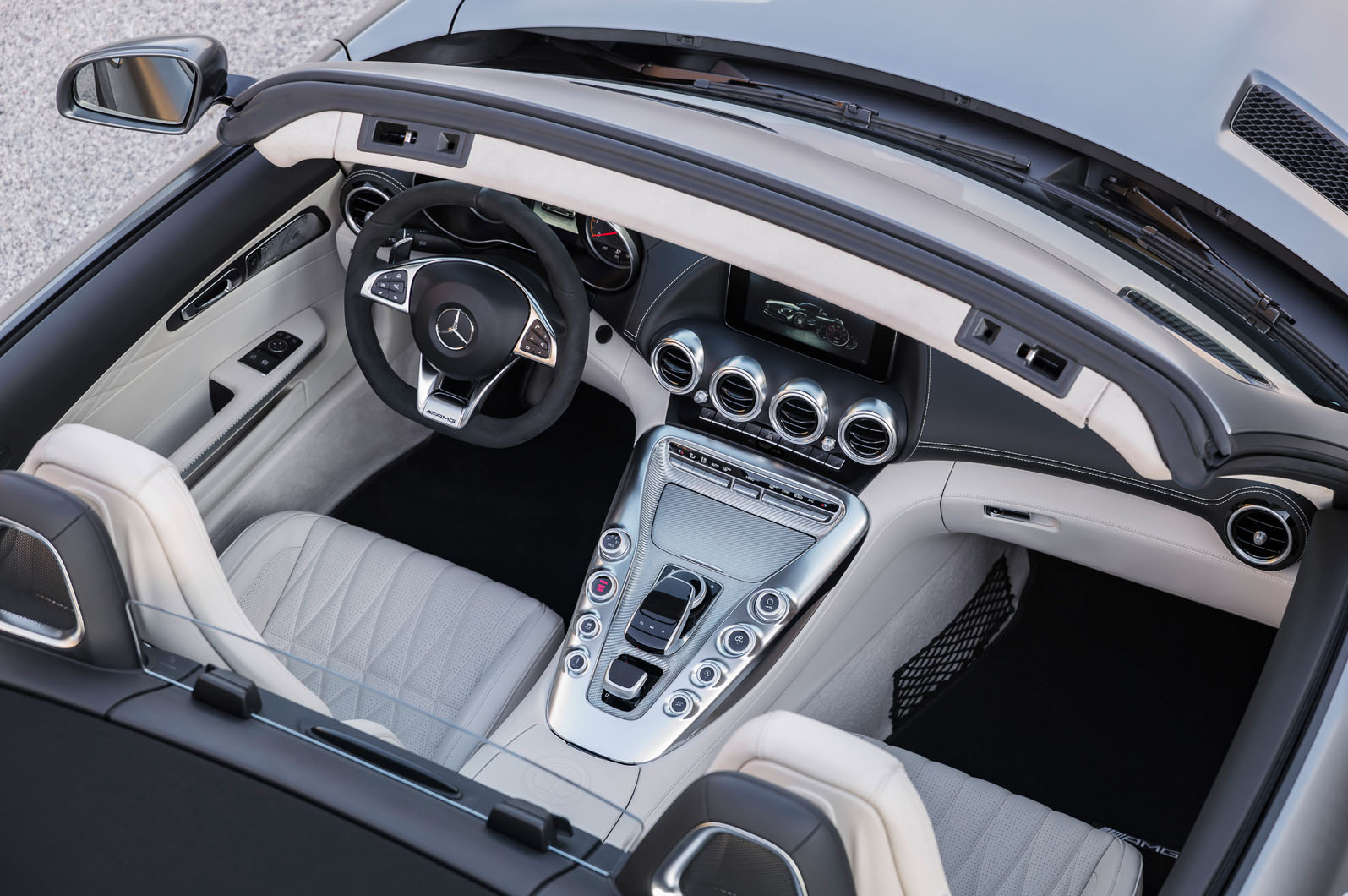 Torque is also up, extending by 22lb ft in both the GT Roadster and GT C Roadster to 464lb ft and 501lb ft respectively.

Together with the increase in power and torque, the GT Roadster also receives altered gear ratios for its seven-speed Speedshift dual-clutch automatic transaxle. AMG says the new open-top features a higher first and lower seventh gears, as well as a lower final drive than the existing GT Coupé. 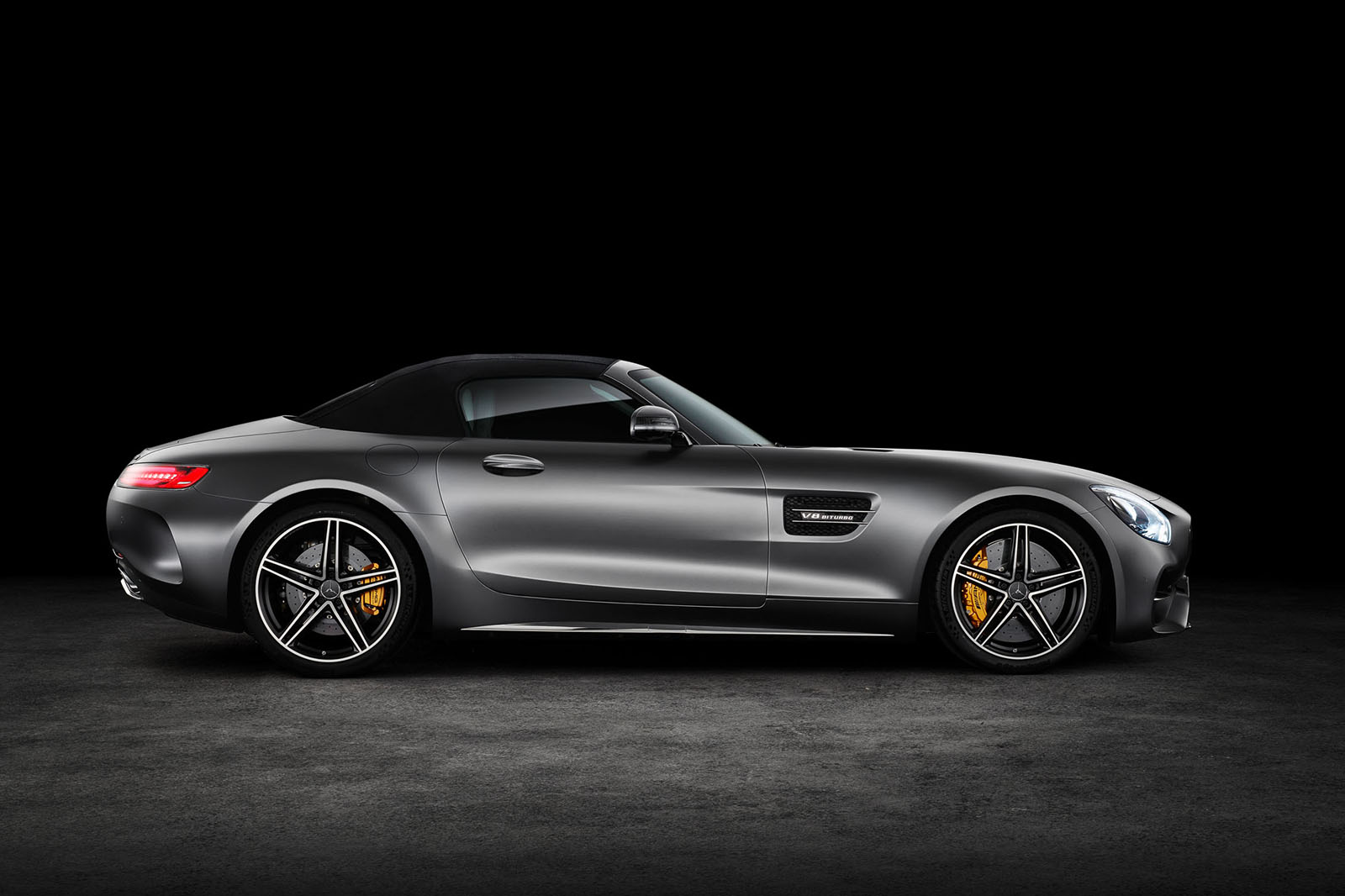 AMG explains the 65kg weight difference between the GT Roadster and GT C Roadster due to the latter receiving a higher level of standard features. Included is the rear-wheel steering system first unveiled on the GT R. It steers the rear wheels in the opposite direction to those up front at speeds up to 62mph to enhance agility and reduce the amount of steering input that is required to turn into corners. Once the speed exceeds 62mph, the rear wheels then turn in the same direction as those at the front in a move that is claimed to enhance longitudinal stability without any reduction in overall steering response.

Although Mercedes-AMG refuses to comment, German dealer sources confirm the altered styling, more powerful engine and altered gearbox ratios of the GT Roadster models will feature in a facelifted version of the GT Coupé.

For your information, the GT C can be driven manually if so desired!

Looks even better than the coupe.
Though the grille design is a bit too in-your-face, or a bit like a locomotive. The vertical slats are uncharacteristic and a bit too loud. Having these vertical slats recessed from the grille opening and perhaps having a subtle concave shape to it would give it a more elegant and sophisticated look.

I hope this will influence the future styling of the SL and SLK. The upcoming SL will lose the power folding hardtop, which is puzzling as it suggest it will be more sporty than luxurious which due to weight savings and the loss of convenience in favour of simplicity. This puts it almost in competition with MB's own GT.

It's interesting that BMW has been over expanding their SUV models (which is unfortunate), while MB is expanding their cabrio line (C, SL, SLK, S, and the GT) which is nice sign that MB still cares about their sporty and luxury models even though they may not be generating the same amount of sales and profits of a SUV.

I like the vertical bars on the grille which pay homage to the classic Mercedes racing cars.

But while those racers were light and athletic, their modern equivalents have become far too wide and long. Look at the elongated bonnet and the ultra wide centre console. McLaren shows us that sports cars need not be bloated.

As such these Mercedes will feel more at home in the Boulevard St Germain than speeding down country lanes.

I thought the point of the GT range was to offer a more focused alternative to the SL, but reading this article I doubt whether these giant cars manage to differentiate themselves sufficiently from the SL range.

Where does this leave the SL
View all comments (9)