Infiniti has showcased a prototype version of its Q60 Black S performance hybrid at the Paris motor show. It's powered by a combination of a 400bhp 3.0-litre V6 and a Formula 1-style KERS energy recovery system for a total output of 563bhp.

The prototype is claimed to duck below four seconds for the 0-62mph sprint, although an exact figure hasn't been specified. The car’s power-to-weight ratio is pegged at 315bhp per tonne.

It uses a dual-hybrid powertrain heavily inspired by that of an F1 unit, with a regenerative braking system (MGU-K) providing one half of the system’s electric propulsion, and electric turbochargers combined with two heat energy collection units (MGU-H) recovering heat from the car’s exhaust gases under acceleration making up the other half. The petrol V6 is the same unit found in the road-going Q60 and powers the standard car from standstill to 62mph in 5.0sec.

All three electric power sources pump energy into a 4.4kWh 'high rate discharge' battery, and then in turn through an anti-lag system. This doesn't give the Project Black an electric-only range, as it exists purely to feed power to the drivetrain as quickly as possible.

Like the concept revealed at the Geneva motor show last year, the Black S is based on the Q60 coupé, although aggressive styling marks it out from the regular car. The concept had large twin central exhausts, working bonnet vents and a sporting bodykit, but these appear to have been dropped for the prototype. However, there's still a full carbonfibre bodykit surrounding the car, with an F1-inspired rear wing and carbonfibre bonnet vents.

Several components of the car's bodywork are made of carbonfibre, including the roof, front wings and front bumper. Infiniti's engineers claim the weight saving goes some way to offsetting the additional mass of the powertrain. It still weighs in at 1776kg, 24kg more than the base Q60. 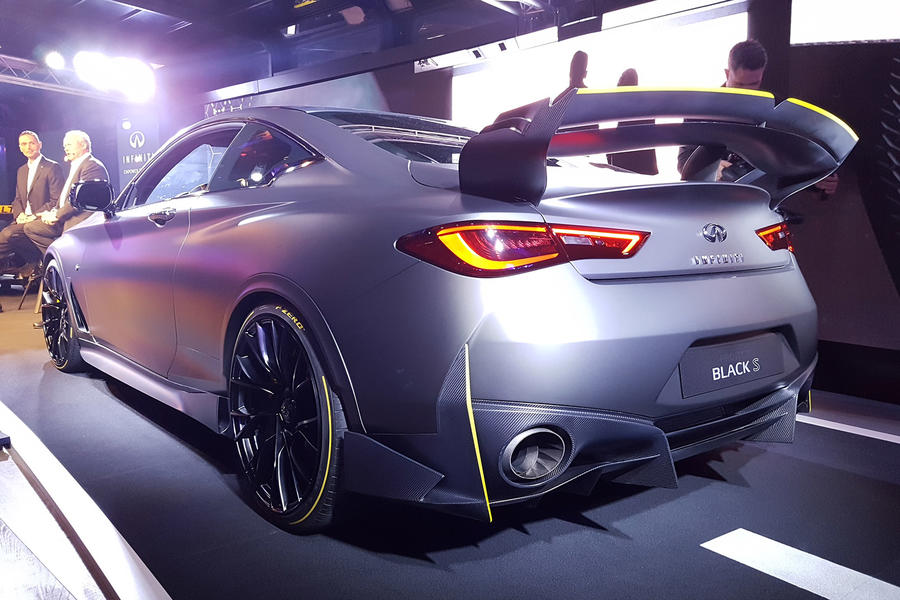 Infiniti’s mid-sized coupé has the looks to do well, but little of the substance to go with them

Infiniti teamed up with Renault’s Formula 1 team to implement the technology on the Black S, with enhanced aerodynamics making it slipperier and producing more downforce than the regular car. The carbonfibre rear wing, for example, is similar in profile to the one the F1 team fits to its cars for the Italian Grand Prix at Monza and will provide the Black S with stability on high-speed straights and vital downforce when cornering.

Exclusive 21in wheels, differing in design from those of the concept, are also fitted. They hide significantly upgraded brakes, which use a new brake-by-wire system alongside the existing steer-by-wire and throttle-by-wire system of the Q60.

The Black S hasn't yet been confirmed for production, but the car’s transition from concept to prototype suggests that it’s edging closer to that point, small potential UK sales volumes notwithstanding. Infiniti sold 623 cars in the UK between the start of this year and the end of August.

Infiniti’s global boss, Roland Krueger, said:  “Project Black S utilises high power and smart energy management from advanced powertrains, a thrilling dynamic capability on road and track, and a performance-oriented aesthetic. A collaborative venture between Infiniti and the Renault Sport Formula 1 Team, the Project Black S prototype is a test bed for new ideas and technologies, demonstrating how our Alliance partnerships could make our ambitious visions a reality.”

How close is the Project Black's powertrain to that of the Renault Formula 1 car?

Does this preview a line of production performance Infinitis?

"Let me just say this: with electrification you are opening up a new way of getting performance, and that is what we are previewing here. We are part of the [Renault-Nissan-Mitsubishi] Alliance, which is the biggest electric vehicle manufacturer in the world, and we will benefit from that capacity. At the same time, we have this example where we are expanding electrification into a performance car to show the benefits, without changing much of the traditional drivetrain. From 2021, we have announced that we will go into full electrification".

Does this electric future spell the end for diesel development at Infiniti?

"I would say that, referring back to Mr Ghosn's [Alliance chairman] comments, that the market is definitely changing. I can refer to his comments about where our direction is heading: our direction is electrification. We will go fully electrified. We as part of the Alliance benefit from the engineers and experience, which will push us forward."

It’s really kinda scary if my car has every major control being bywire. I’m not buying such cars until it has Boeing 777 levels of redundancy.

The Future of GT-R

This drive train is probably similar in format to that which will power the next GT-R. Should be a beast.
martin_66 28 September 2018