New Cadillac XT4 SUV could be brought to Europe

The new Cadillac XT4, a compact SUV that the firm is considering bringing to the European market, has been launched at the New York motor show.

It will be powered by a 2.0-litre turbocharged petrol engine that produces 234bhp and up to 258lb ft of torque, and features a nine-speed automatic gearbox and optional all-wheel drive. Cadillac estimates a combined 32.4 UK mpg.

Cadillac is owned by General Motors, which last year sold its largest UK brand, Vauxhall, to the PSA Group. Cadillac has previously focused on large saloons and SUVs, and company bosses believe the XT4 could appeal far more to European buyers. The firm currently has just two official UK dealers.

The five-seater is 4599mm long, 1881mm wide and 1627mm high, with a wheelbase of 2779mm. It features MacPherson strut suspension at the front, with five-link independent struts at the rear. Active sport suspension will be available as an option.

It will be offered in three trim levels, all of which feature LED lighting. Wheels will be 18in as standard, with optional 20in versions available. Interiors feature an optional 8in HD infotainment screen and a Bose sound system. Cadillac claims 637 litres of boot space, which expands to 1385 litres once the rear seats are folded.

Cadillac has enjoyed a resurgence in recent years, with its year-on-year sales growing by 15.5% in 2017, largely fuelled by a 50.8% growth in China. It’s most popular model is the larger XT5. 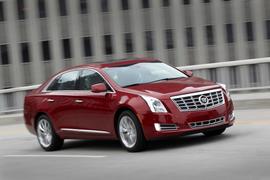 Like the smaller CTS, the new Cadillac XTS is a visual standpoint and offers plenty of comfort and reasonable performance

So that they could double their EU sales all the way up to 2.000 per year?

I've always liked Cadillac and to me that,this new XT4 looks pretty good at a sub $36k entry list price is pretty keen as well,however how could GM sell it in Europe since it flogged off Vauxhall/Opel to PSA? Starting off from scratch would be problamatic to say the least so really to be honest European sales unless GM has really deep pockets aren't likely are they? which is unfortunate because Cadillac have produced some of their most innovative cars in the past decade.

Not sure about the exterior design, but I’d buy it for the flip lid bin integrated to the dashboard. Clever thinking Cadillac. It will save rubbish accumulations in the car.