BACK TO ALL NEWS
Currently reading: Cadillac CT6 to take on S-Class
UP NEXT
Niels van Roij Design unveils tribute to Ferrari 'Breadvan'

Cadillac CT6 to take on S-Class

Mercedes-Benz S-Class rival comes with a turbocharged 3.0-litre V6, and will be crucial in rebuilding the brand
Share
Open gallery
Close
Share story

The flagship Cadillac CT6, a rival to the Mercedes-Benz S-Class, has been revealed at the New York motor show.

Read our review of the Cadillac CT6

The lightweight luxury saloon is one of eight new cars that Cadillac is launching by the end of 2020 as part of a $12 billion (£8bn) investment, and it’s expected to reach the UK and Europe in early 2016.

The CT6 is powered by three petrol engines at launch: a turbocharged 2.0-litre inline four, a naturally aspirated 3.6-litre V6 and a twin-turbo 3.0-litre V6 with 400lb ft of torque. The engines are said to produce around 266bhp, 335bhp and 400bhp respectively, and are paired with an eight-speed automatic gearbox.

A plug-in hybrid variant and a twin-turbo V8 will join the engine range further down the line, Cadillac confirmed to Autocar.

The 2.0-litre model is rear-wheel drive, while the two V6 powerplants are mated to an Active Chassis System as standard that includes an all-wheel drive system and Magnetic Ride Control that adjusts each wheel’s suspension damping individually to improve the ride. It has double-wishbone front and multi-link rear suspension, and the driver will have a choice of three different drive modes: Tour, Snow/Ice and Sport.

According to the manufacturer, the CT6 is structurally lighter and stiffer than the BMW 5 Series and Audi A6 thanks to its aluminum exterior body panells. It is also said to offer “bank vault” levels of quietness.

The cabin in the premium saloon utilises a combination of “luxurious leathers, exotic woods, and carbonfibre”, and the dashboard features a large high-resolution touchscreen. There are also screens in the back of the front two seats for rear-passenger entertainment.

The interior is clad in Opus leather and includes heated seats with five massaging functions. The reclining seats in the rear are electrically adjustable and have media controls on the armrest that feature HDMI and USB ports. Wireless phone charging will also be available, and the CT6 offers “segment-best” interior storage, including a 2.2-litre capacity in the centre console.

Cadillac says the CT6 has an “industry-first” 360deg camera view around the car that will be able to record front and rear views while driving, while full 360deg recording is offered if the security system is activated.

Among the technology systems offered are Advanced Park Assist, which parks the car automatically, and new safety features including Night Vision, which helps identity objects through heat signatures on the infotainment system, and a Pedestrian Collision Mitigation feature that detects pedestrians and uses autonomous braking to avoid collisions.

Described by Cadillac boss Johan de Nysschen as “a technological masterpiece”, the CT6 is expected to take a central role in the rebuilding of the brand globally as it moves to break free of predominantly US sales and crack the Asian and European markets.

“As is traditional for a luxury brand, we’ll lead from the top,” said de Nysschen. “We have until 2020 to get our product offering in shape for a European launch, and that means starting at the top and building credibility and establishing a reputation for cutting-edge technology.”

In an interview with Jalopnik, de Nysschen confirmed that the CT6 would also be sold with a plug-in hybrid variant and a twin-turbo V8. Although no power output has been revealed for either of those engines, the V8 would most likely take centre stage in Cadillac’s V-badged range of performance models, which are designed to rival equivalent cars from Mercedes-AMG, BMW M division and Audi's Quattro GmbH. 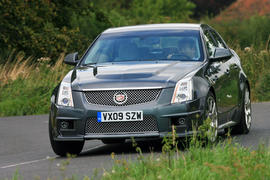 In addition, de Nysschen has targeted the creation of a wider SUV and crossover line-up, topped by the Escalade, and the creation of an Audi A3 and Mercedes CLA-rivalling saloon. The latter model would be rear-wheel drive, he confirmed.

“Cadillac has got to be bold and expressive,” said de Nysschen. “Owning a Cadillac should be a symbol of arrival, but without being brash or ostentatious. In the past we have been quite formal in that expression, but in future we can be a bit more casual in our expression.”

Although Cadillac has only 46 dealers in Europe at present, de Nysschen also hoped technology and a new approach could help the firm establish European sales without having to undertake investment in a full network. “We are investigating if there is room for us to have just a few flagship stores and then take cars to prospective customers, and let them test them and transact with us in their own homes,” he said. “Then we could collect the cars for servicing and make use of the existing GM dealership infrastructure.”

Having previously worked at Audi and Infiniti, de Nysschen suggested establishing Cadillac as a global premium brand could take more than 20 years, but he added that the brand’s 112-year history, strong home market and understanding of European tastes should stand it in good stead.

“We respect all competitors, but Europe requires heritage and an understanding of driving dynamics,” he said. “In that respect, Cadillac has an advantage over its Japanese competitors.”

I really like the way this looks - leaving aside the dodgy front lights! - and if I was in the market I'd seriously consider one. While the German trio do nothing for me, I think about the Jaguar XJ and Maserati Quattroporte and wonder if I'd really choose the Cadillac over them. By the time this Caddy makes it to these shoes in RHD (2020, was it?) there'll be a new Jaguar XJ to contend with, and going by their recent successes, it'll probably be outstanding.
soldi 1 April 2015

Shot himself in the foot

“We respect all competitors, but Europe requires heritage and an understanding of driving dynamics,” I think he's overlooked the fact that Cadillac has no heritage outside of USA and also has no understanding of driving dynamics, period. Basically Cadillac has no advantage compared to any premium brand currently present in Europe.
abkq 1 April 2015

Heritage is earned, not given. Cadillac has the advantage of styling which, I agree with Daniel Joseph, hasn't quite moved on but is still way ahead of, say, Mercedes.
If the Chrysler 300C managed some degree of success in Europe because, I suspect, of its distinctive styling, why not Cadillac too?

Heritage is earned, not given. Cadillac has the advantage of styling which, I agree with Daniel Joseph, hasn't quite moved on but is still way ahead of, say, Mercedes.

Cadillac has heritage, in the UK at least. Cadillac conjures up images of distinctive luxury cars from the 50s and 60s that turn up at country shows alongside steam engines and llamas.

That could be at least as much a disadvantage though. With the current conservative styling how many people are going to be disappointed when they walk into their newly opened local Cadillac dealer? Or go around to a friend's house after they tell you they've bought a Cadillac?

I thought the CTS-V showed that they did understand chassis dynamics. The problem with Cadillac is their heritage, having been renowned for producing among the best quality and luxurious cars during the Vintage era, then throwing it all away in the postwar chase for more sales and profits. I know styling is subjective, but I really like this one and if they can live up to their bold claims (Past examples following bold claims mean I won't hold my breath) then it should be worthy of consideration. The question is if everything comes together, will GM be encouraged by the inevitable small interest we Europeans put into unknown quantities? Or will they be put off and pull Cadillac out of Europe again?

but without being brash or ostentatious.....

Ho ho ho. Do the Americans even understand what the word understated means? Those front lights are horrible.
To be fair, apart from those lights it does look quite good in the limited views available from these pictures - a bit like Mercedes before it went all overwrought and bling. However, interiors have often been the downfall of American imports so I remain to be convinced.
View all comments (7)