BACK TO ALL NEWS
Currently reading: BMW i8 Roadster priced from £124,735
UP NEXT
How a sat-nav can make you faster around a track

BMW's new i8 Roadster is the second-most expensive car in the brand's range, with prices revealed to start at £124,735.

The price puts it behind the range-topping M760Li, which is priced at £138,335. That car is also the brand's fastest-accelerating car in its history.

The arrival of the i8 Roadster comes more than five years after it was originally unveiled as a concept at the 2012 Beijing motor show and two years since a more production-based concept was unveiled at the 2016 Consumer Electronics Show in Las Vegas.

The lengthy gestation period has led to the first open-top model from BMW’s fledgeling i brand adopt a newly developed roof structure. It automatically stows beneath a panel integrated within the two buttresses behind the cabin at the press of a button. 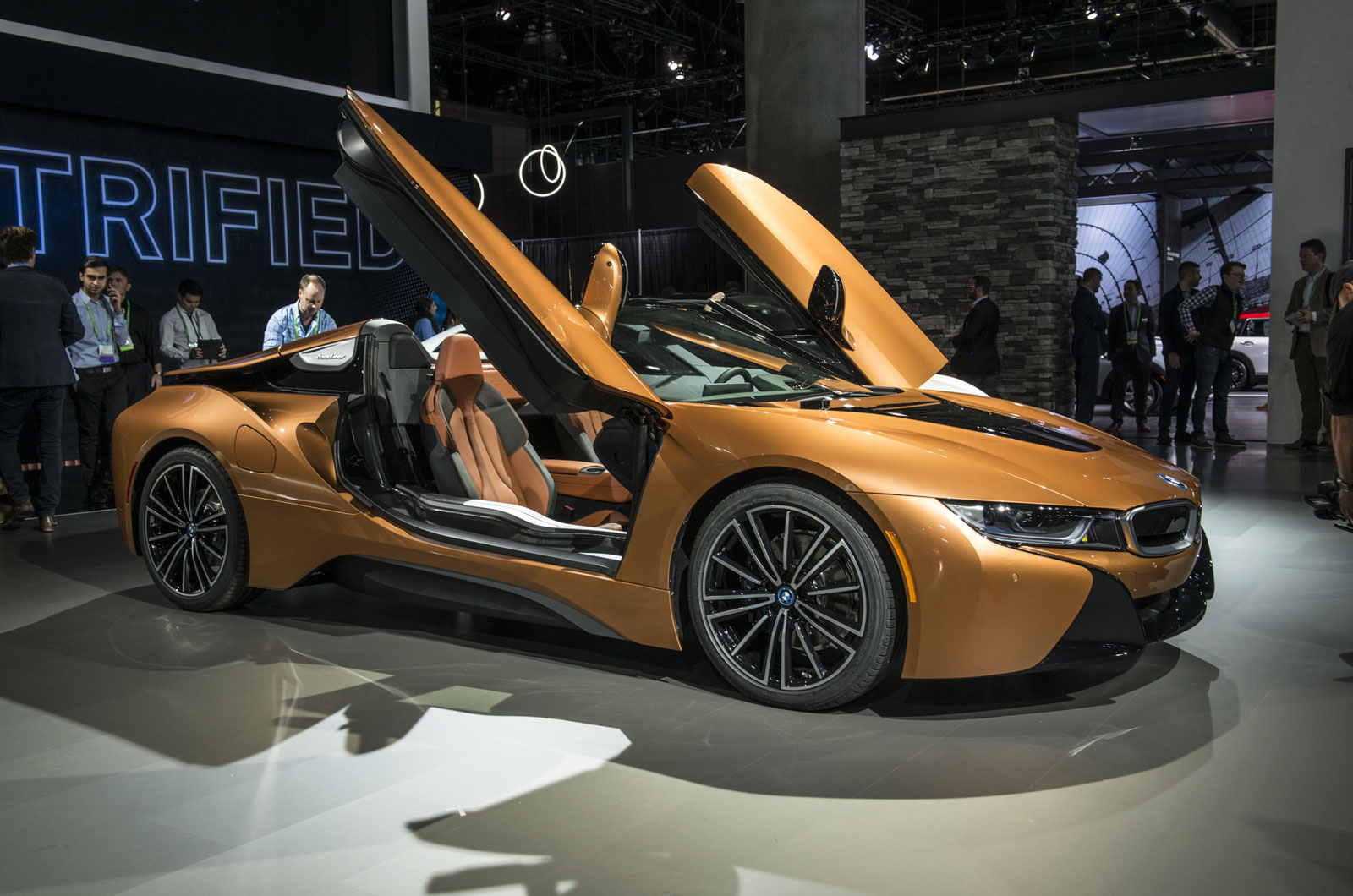 The roof, which consists of a large fabric panel and integrated header rails, is claimed to open in just 15sec at speeds up to 31mph.

To accommodate the new roof, BMW has modified the windscreen, providing it with a strengthened frame and beefed-up quarter windows. The rear window, which doubles as a wind deflector, is also altered, and can be closed or opened independently of the roof.

Further stylistic changes over the facelifted i8 coupe that are set to go on sale simultaneously with the i8 Roadster later in the summer are the deletion of the rear side windows. They are replaced by new black panels overlaid with aluminium-look trims etched with the word 'Roadster'. 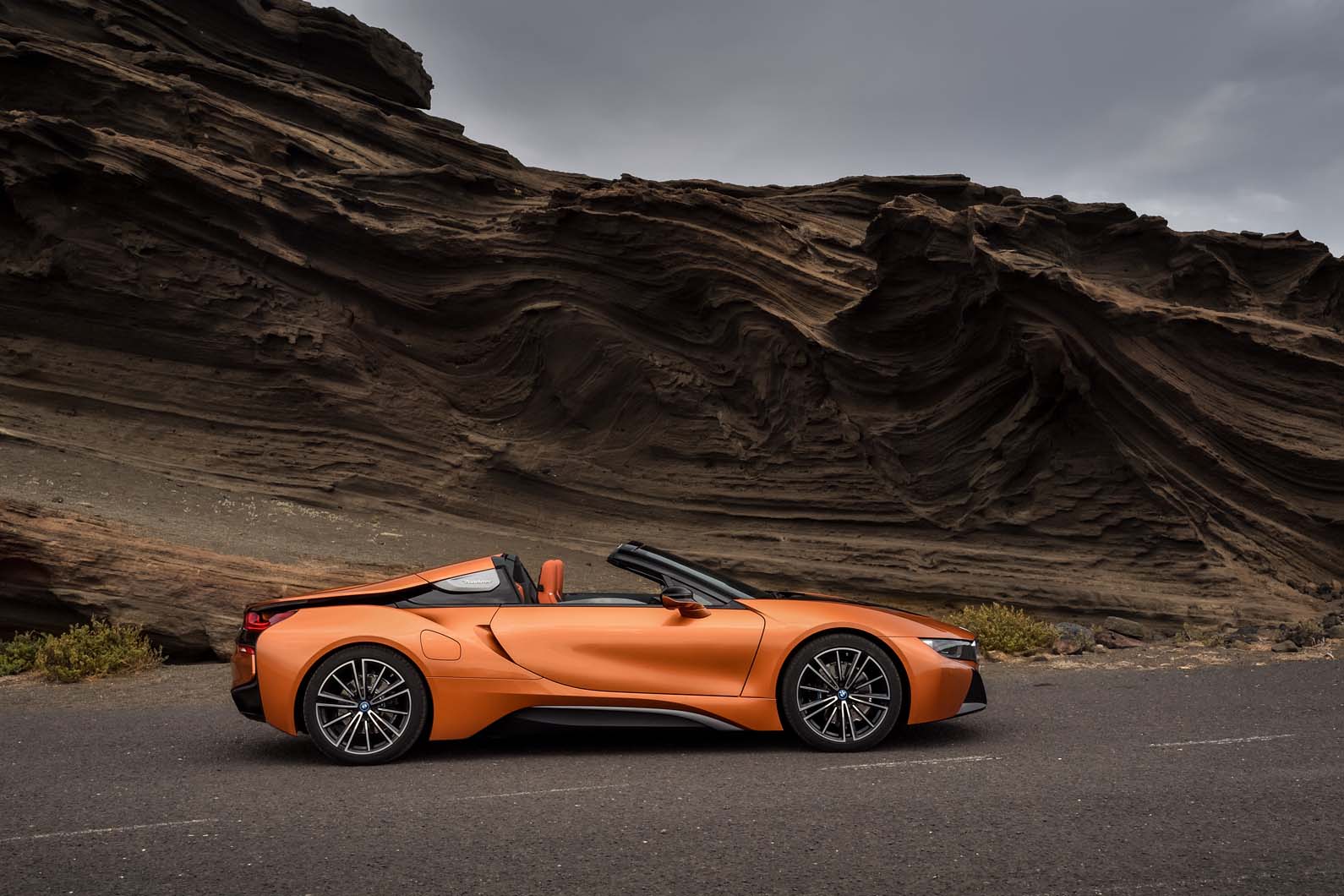 The liftback tailgate of the i8 coupé also makes way for a lengthy engine cover on the new i8 Roadster.

BMW says the inherent structural integrity of the i8’s carbonfibre-reinforced plastic and aluminium structure has helped to minimise weight gain for the new Roadster, which is claimed to tip the scales just 60kg over the facelifted coupé at 1594kg.

Inside, the two-plus-two configuration of the i8 coupé is eschewed in favour of a two-seat layout for the i8 Roadster, which features a claimed 92-litres of oddment space within three separate cubby holes integrated into the rear bulkhead. 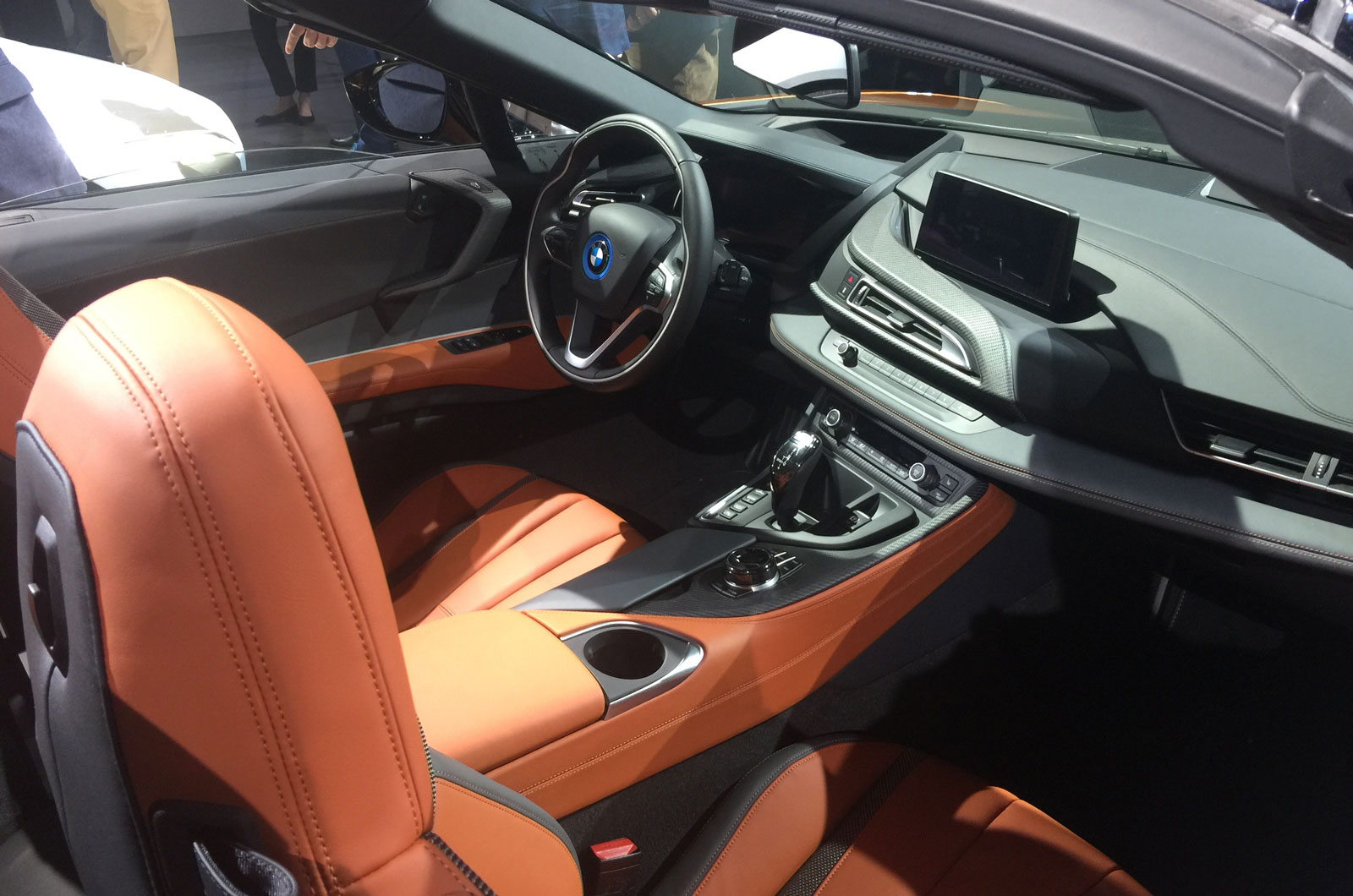 The earlier dashboard design has also been lightly updated for the i8 Roadster and facelifted i8 coupé, with the latest version of BMW’s iDrive system now offering either touch control on a free-standing 8.8-inch monitor or rotary control via a dial on the middle console featuring among other subtle changes.

BMW has also confirmed its new open-top i brand model receives newly designed seats, an optional head-up display unit as well a range of new trim options, including carbonfibre trim elements for the dashboard and ceramic controls within the centre console.

Power for the new i8 Roadster and facelifted i8 coupé comes from a reworked version of the plug-in petrol-electric hybrid driveline used by the existing coupé – the LifeDrive architecture as it is labelled by BMW. 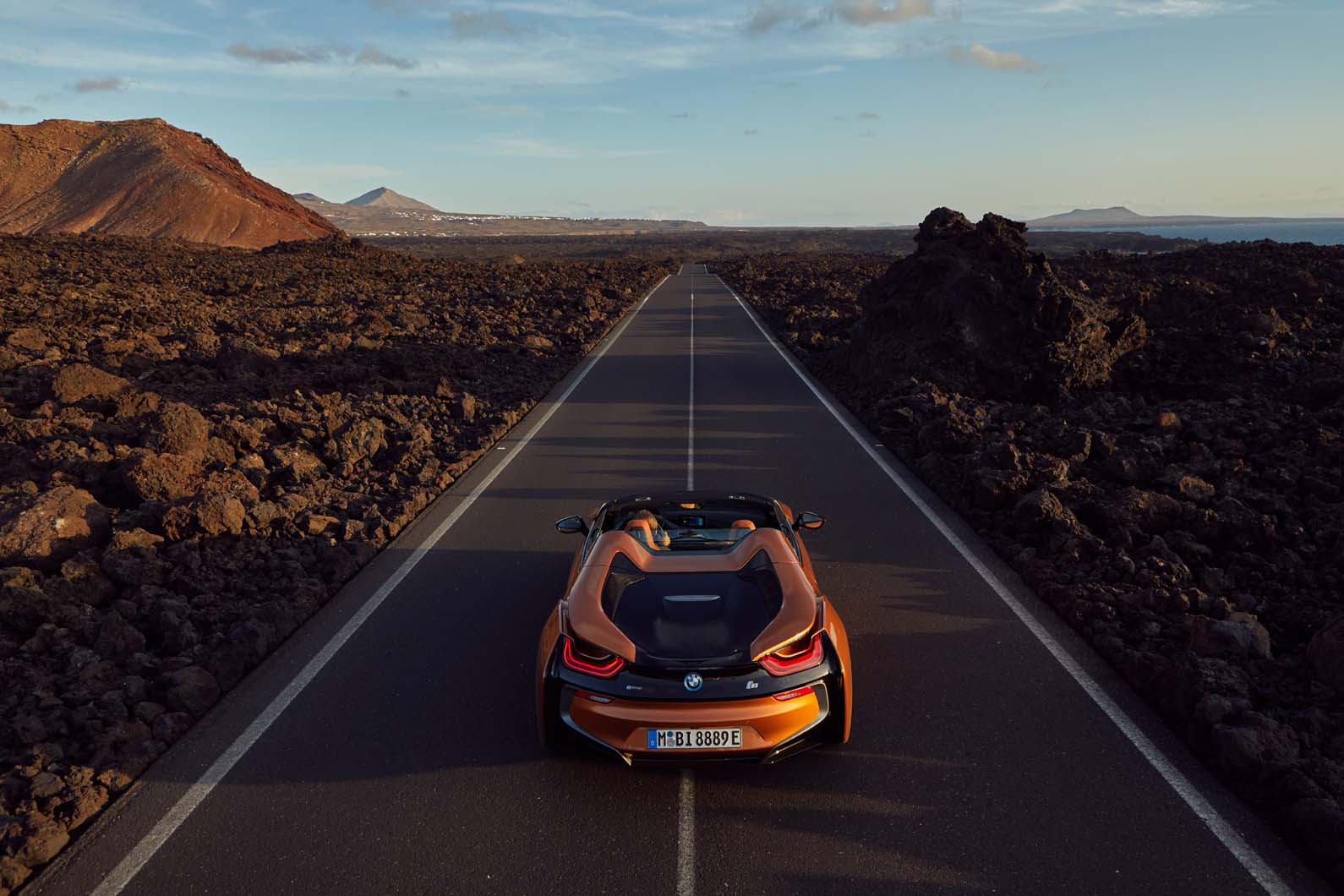 The combustion engine continues to develop the same 228bhp and 236lb ft of torque as the existing unit, with drive channelled through a six-speed automatic gearbox to the rear wheels. The electric motor, however, has been upgraded with an additional 12bhp, increasing its power reserves to 141bhp, which is delivered together with the same 184lb ft of torque of today’s i8 coupé via a two-speed gearbox to the front wheels.

Altogether, there is a combined 369bhp and theoretical maximum torque loading of 420lb ft, although the latter is continually regulated dependent on grip and traction levels. Five different driving modes are available: comfort, sport, and eco drive in hybrid mode and comfort and eco drive in electric mode. 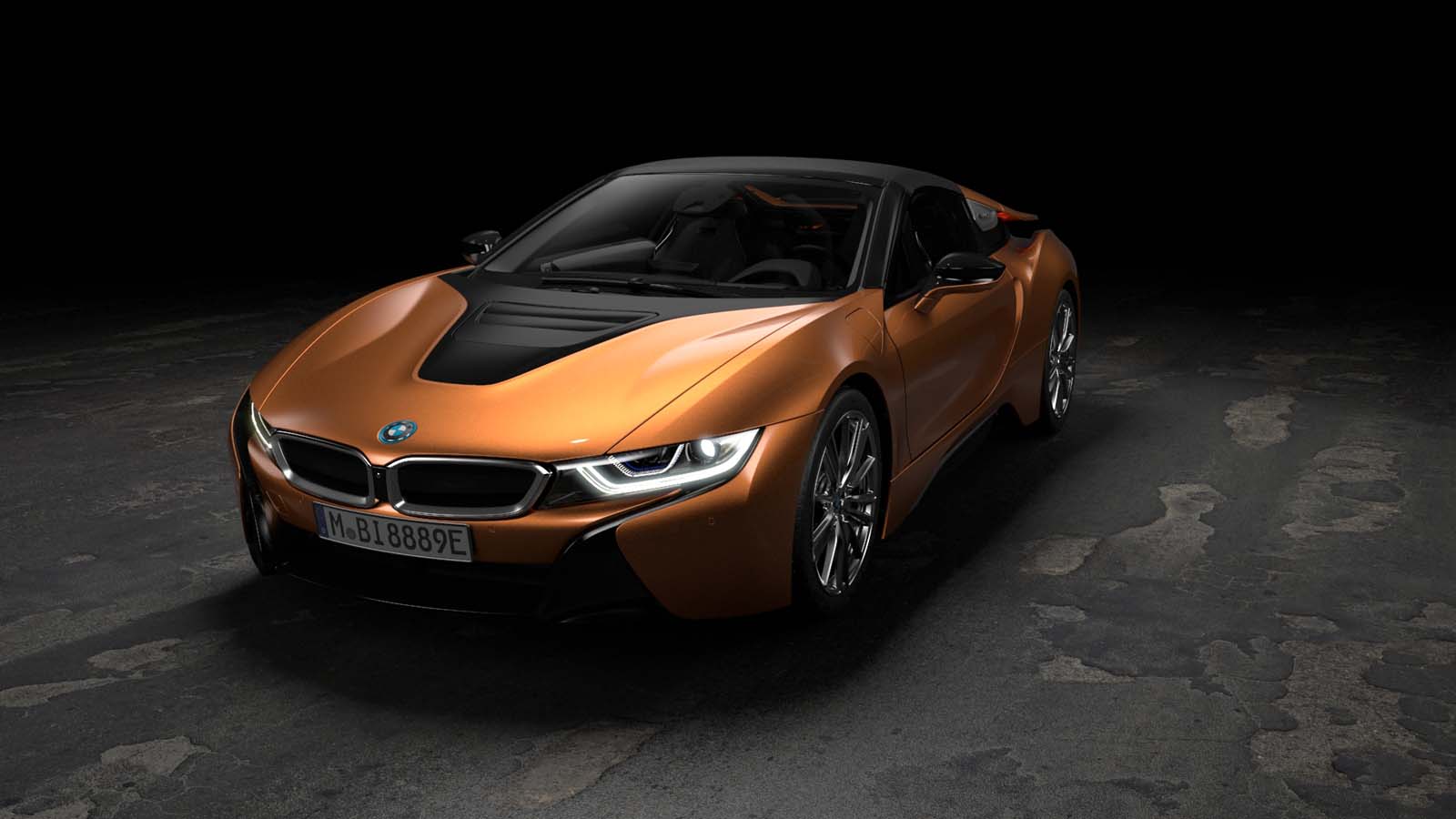 Accompanying the changes to the driveline is a revised lithium-ion battery. Its cell capacity has risen from a previous 20Ah to 34Ah, with energy capacity increasing from 7.1kWh to 11.6kWh. BMW claims the new battery provides a range of 33 miles for the i8 Roadster and 34 miles for the facelifted i8 coupé in front-wheel drive electric mode up to a limited speed of 75mph on the European test cycle.

Also new is BMW’s latest 360° electric charging system. In combination with the latest evolution of the German car maker’s i charging station, it provides 7.2kW charging and a claimed 80 per cent state of charge for the i8 Roadster and facelifted i8 Coupe in less than three hours.

i8s really are the used bargain of the decade. A colleague has just picked one up at three years old. It's a fabulous thing, in immaculate condition, with just under 20,000 miles, and a fully documented BMW main dealer service history. It has £4k worth of options on it, including upgraded wheels, Carpo Dark interior, internet connectivity and various trim upgrades Came with a new MOT and a 12 month warranty. With a bit of haggling, he secured it for £55,500, pretty much half the new list price. I know nobody pays list on these, and there are some good deals out there, but we reckon it's cost its first owner a minimum of £1,000 a MONTH in depreciation. Crazy money.

General day to day driving my example returns 42mpg. Drove to various circuits in Spain and Portugal in it during the summer ( used another car on track ) and it returned a mile or two less to the gallon, but it's the way it drives that's so magical , like gliding on the road ! It's also remarkably quick, I have friends living at the Nurburgring, and for years I've taken the scenic route via Prum and Gerolstien to get there, but since the i8 I've gone on the Autobahn towards Venlo, which is derestricted, the there it's perfectly possible to safely see v.max in a few places, remarkable for a 1.5 litre triple ! I'm really disappointed that BMW havent unlocked more of the cars' potential in this upgraded iteration, I think it just reinforces my belief that BMW management are no longer interested in the iCar range, it much easier and more lucrative to electrify tin bodied existing range cars .

@Ravon, what sort of average

@Ravon, what sort of average fuel consumption have you seen?  I know what you mean about pre heating, my humble PHEV does this and its bliss to get in a warm defrosted car.