BACK TO ALL NEWS
Currently reading: Aston Martin Vantage GT12 Roadster one-off special revealed
UP NEXT
Mercedes CEO: Maybach S-Class to take brand to "the next level"

A bespoke, open-top version of the Aston Martin Vantage GT12 has been unveiled at the Goodwood Festival of Speed
Share
Open gallery
Close
Share story

A one-off Aston Martin GT12 Roadster commissioned by a customer has been unveiled at the Goodwood Festival of Speed.

The new open-top model is based on the GT12 Coupe, so has a 592bhp 5.9-litre V12 engine, but it has also received significant changes to its chassis and aerodynamics.

Aston design chief Marek Reichman said the model came about from discussions from a customer looking to buy a GT12 coupe, but then developed into a bespoke one-off creation.

The unnamed customer is one of Aston's best, as well as being a serial supercar buyer.

The model will remain a one-off, because the customer has paid a premium for the exclusivity.

The GT12 Roadster is also intended to showcase what Aston hopes will be a growing and potentially lucrative part of its business in the future, the ability to make one-off models.

Reichman said: "One-offs is an area we're looking to develop. We're lucky the customer said yes in allowing us to show it, because it will generate more interest in the service we have. Customers know the ability of the base products and this allows them something really special and collectable. Part of the unique nature is that it's already worth more than they paid due to its collectability.

Aston's Advanced Operations director David King said that such one-off models are now easier than ever due to the carbonfibre tooling allowing for more bespoke creations to be created cost effectively.

He also insists that stiffness in the model has been maintained despite the roof being lost.

The model has been created by the firm's Q by Aston Martin department, which has made a bespoke one-off model for the first time.

Q by Aston Martin started as a design-led way for customers to have bespoke colour, trim and options on their models, but it has now expanded and joined with the firm's Aston Martin Advanced Operations engineering arm (formerly Special Projects), which has created the likes of the Vulcan and GT12, to allow customers to create bespoke models. 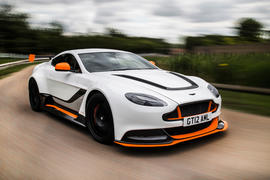 Aston Martin adds power to and removes weight from the V12 Vantage S to make a hardcore, track­-focused special