The Lexus GS F will make its dynamic debut at the Goodwood Festival of Speed this month.

The BMW M5-rivalling super-saloon will be driven up the hill by Mike Conway from Toyota Gazoo Racing.

Other Lexus models on show at Goodwood will include the LFA and the RC F GT3 competition car.

In the high-revving V8, which is a more potent version of the engine seen in the RC F, peak power arrives at 7100rpm with peak torque delivered between 4800 and 5600rpm. Performance figures have yet to be revealed, but we’d expect a 0-60mph time of around 4.5sec and a top speed in excess of 170mph.

A key differentiation point to rivals including the M5, Jaguar XFR-S and Mercedes-Benz E63 AMG is that the GS F’s engine is normally aspirated rather than using forced induction.

Those GS F engine outputs are for the US version of the car seen in Detroit, with European versions set to follow later this year. In the US, the GS F will also line up against the new 640bhp 6.2-litre supercharged V8 Cadillac CTS-V, which makes its world debut at the Detroit show.

The GS F’s V8 will send drive to the rear wheels through an eight-speed automatic gearbox, which features a manual shift mode.

Lexus says the GS F has had its chassis stiffened over that of the standard GS saloon on which it is based. The chassis will feature “structural reinforcements and an exclusive suspension package [strut and multi-link] designed to optimise the car’s handling capabilities and ride quality”.

The GS F is equipped with Lexus’s Torque Vectoring Differential as standard. It includes three modes: Standard, Slalom (which improves steering response and agility), and Track (for circuit driving).

Design wise, the GS F builds on the look of the standard car and features several aggressive-looking F aerodynamic and styling additions, including new front and rear bumpers, flared wheel arches, side skirts, a rear diffuser and a subtle lip spoiler. Quad exhausts feature at the rear.

The GS F is the second four-door saloon Lexus’s performance F division has created after the 2008 IS F. F division was also responsible for the V10 LFA supercar and the new RC F coupé, which is now arriving in the UK for sale.

Pricing has yet to be revealed for the GS F as it is still some way from its European launch, but expect it to cost around £80,000 when it arrives towards the end of 2015. The high price will in part be justified by the high level of standard kit Lexus will offer with the car.

Following the GS F is likely to be a four-door version of the RC F, the IS F, which will feature identical underpinnings to those of the coupé but a slightly lower price tag. Expect to see the IS F "sometime in 2016", according to sources. This may well be followed by a convertible version of the RC F. 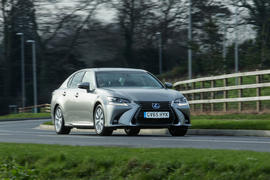 As a rule whenever I read naturally aspirated engine in this class of cars I can't help thinking it must be aimed at the lucky US buyers or those down under.
Moparman 7 January 2015

The Lexus "only" has 389 lb ft of torque going up against the Germans so it won't "feel" fast and earn a demerit. Also, as it is not an Audi, the interior will be pilloried even if it is just as well-made. It will somehow lack that "final tenth" to compete with the other rear drive cars from Munich and Stuttgart and will be mocked for having the audacity to have a price tag of a German when it really is only made in Japan you know.
Cheltenhamshire 6 January 2015

I wonder when the reviewers

I wonder when the reviewers will moan about it lacking in low end torque?