The Sssangyong XAVL concept has been revealed at the Geneva motor show previewing a new seven-seat mid-size SUV.

The concept is expected to become a production model in the future sitting above the Korando – which has also been revealed at Geneva – but below the forthcoming Rexton in Ssangyong’s lineup. A production version of the XAVL would not be released until 2020.

Ssangyong announced its plans of a new model blitz by launching three new models over the next three years and increasing global production to 500,000 units per year.

The three models are thought to be an all-new Rexton replacement, a Rexton-based pickup and a third-generation Korando. A production version of the XAVL would be an addition to those models already planned.

The concept is a new iteration of the five-seat XAV concept from the 2015 Frankfurt motor show and is said to be inspired by the second-generation Korando from the 1990s.

The new concept comes with new connected car technology that can control the navigation, heating and air-con, and there’s also a 10.25in LCD display.

The concept is 4630mm long, 1866mm wide, 1640mm high and has a 2775mm wheelbase. Those dimensions pitch it in the same market as cars like the Skoda Kodiaq and Nissan X-Trail but a production version would likely undercut those cars, which start at £21,495 and £22,800 respectively.

The Ssangyong stand in Geneva is also showing the facelifted Korando, which comes with a refreshed design, more equipment and extra safety features. A new Korando will be introduced in 2019. 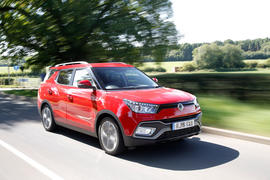