BACK TO ALL NEWS
Currently reading: New 2020 Porsche 911 Turbo S leaks ahead of Geneva reveal
UP NEXT
Spending 48 hours touring in a Ferrari Roma

What appears to be Porsche's flagship 911, the upcoming Turbo S, has leaked online in production form via a social media post.

Published on the Instagram page of the Spanish website Cochespias.net, shots appear to have been taken on a phone and show the car, badged 911 Turbo S, totally undisguised in a car park.

The Stuttgart brand is set to officially reveal both Porsche Turbo and Turbo S variants of the 992-generation Porsche 911 at the Geneva motor show next month.

The Turbo models will retain the standard car’s 3.0-litre flat-six engine, but a pair of substantial turbochargers and additional hardware taken from Weissach’s GT2 RS flagship will boost output significantly - up to at least 620bhp in the Turbo S. 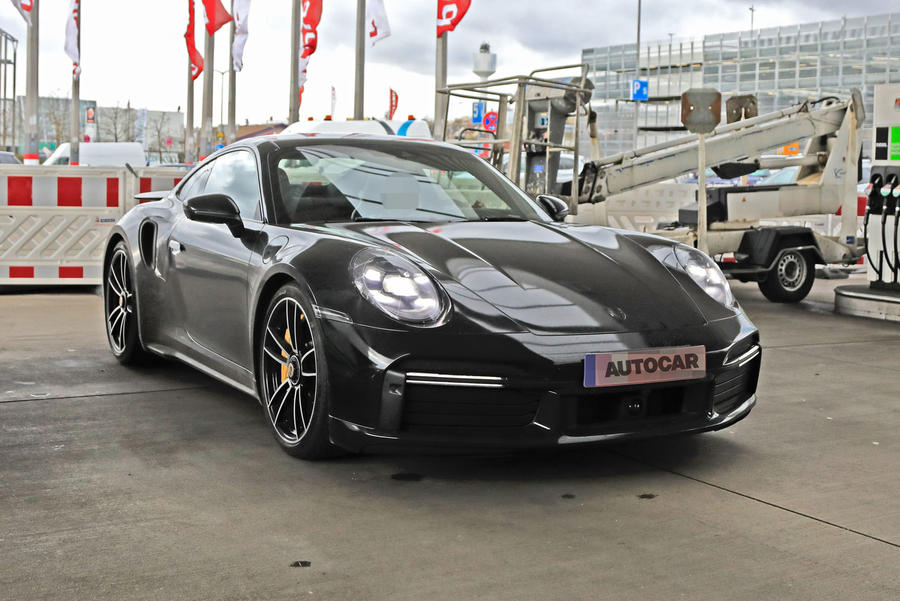 The Turbo will receive the same forced-induction treatment but will produce around 50bhp less. Its expected 570bhp output represents a 30bhp increase over the Porsche outgoing 991 equivalent. It should be enough to push the Honda NSX rival from 0-62mph in less than three seconds and on to a top speed north of 200mph.

Both models will be distinguished from the standard 911 by a downforce-enhancing bodywork package that includes widened rear wheel arches, a fixed rear spoiler, side air intakes and model-specific front and rear bumpers. They will likely also be available with unique wheel designs and paint scheme options.

Although the 992's mixed-metal bodyshell is lighter than that of the 991, a heavier powertrain and mandatory petrol particulate filters mean the 911 Turbo is set to weigh slightly more than its predecessor overall.

Porsche will confirm official pricing and specifications for the new model at its launch, but it’s likely that prices will start from around £130,000 for the Turbo coupé and rise to roughly £160,000 for the Turbo S in Cabriolet guise.

Joining the 911 Turbo on Porsche’s Geneva stand will be the new six-cylinder GTS versions of the 718 Cayman and 718 Boxster.

Yes, it's another 911, the poster car of generations past, and there's nothing wrong with that, is there?

I was wondering if just using the name "Turbo" as the last word in 911 motoring would be a good idea, like in the old days. No Turbo S etc... Just make the top dog the "Turbo".