BACK TO ALL NEWS
Currently reading: Lexus LS 500h on show in Geneva
UP NEXT
Volkswagen unveils larger and more advanced new Amarok

Electrically-assisted version of flagship will share its powertrain with the LC 500h and get more than 350bhp; it can run in EV mode to 87mph
Open gallery
Close

The Lexus LS 500h, a hybrid version of the brand’s latest flagship saloon, has been revealed at the Geneva motor show.

Lexus has confirmed that the electrified Mercedes-Benz S-Class rival will make use of its Multi Stage Hybrid System, which mates a 295bhp 3.5-litre V6 petrol engine and four-speed automatic gearbox to two electric motors that drive a CVT transmission. The CVT has been engineered to replicate a six-speed gearbox, meaning the car drives like it has a 10-speed.

The two-part system, which was introduced in the LC 500h, is said to have gearchange times that are comparable to a dual-clutch gearbox, but the Lexus system is lighter and more compact. The LC 500h gets a total of 354bhp, and that same figure is expected of the LS model. 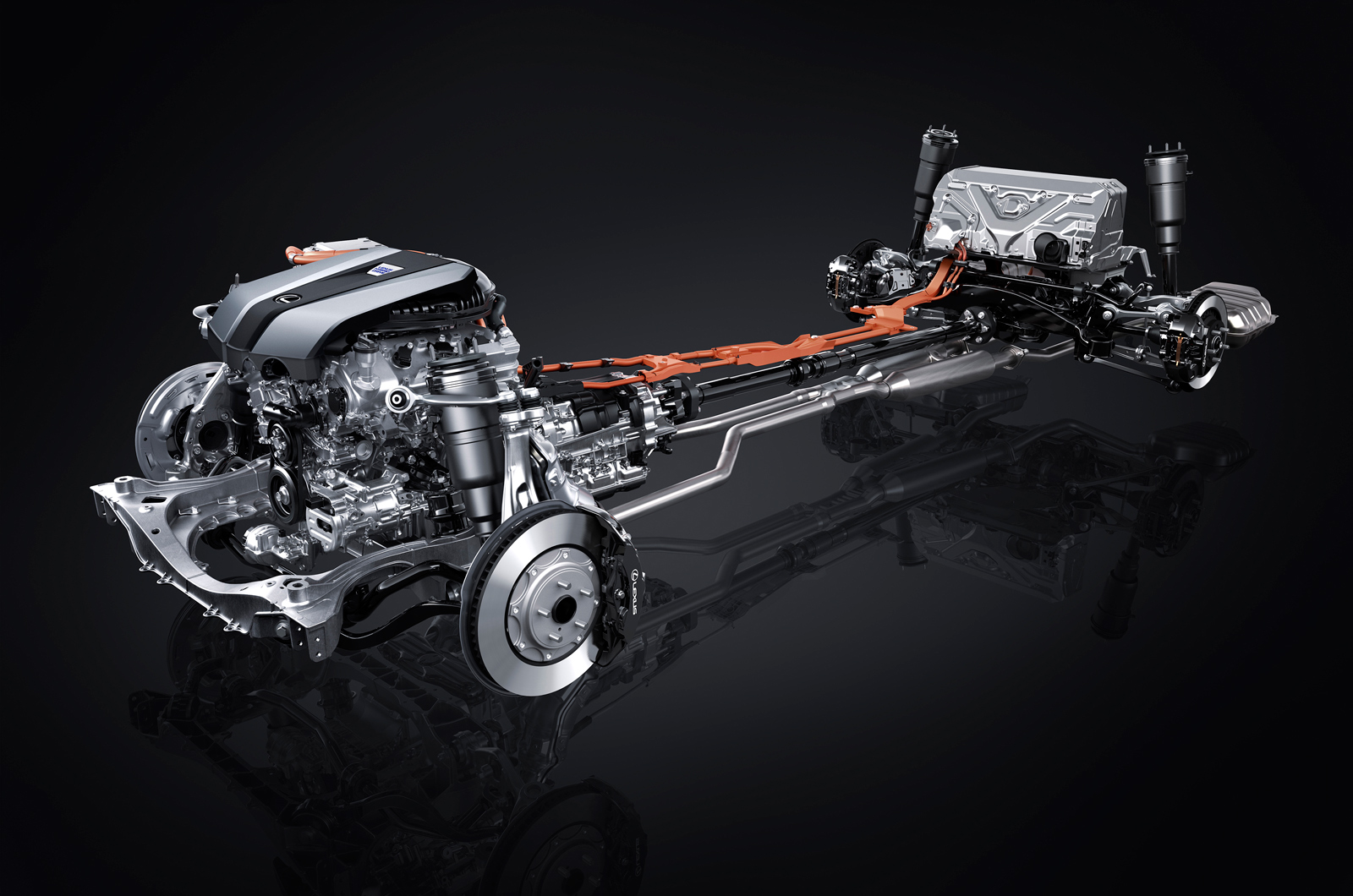 Technical illustrations show the system's layout in the car, with the powerplant located at the front and the battery pack at the back. The motors drive one front wheel each, and it can run in full electric mode at speeds of up to 87mph. The petrol engine remains focused on powering the rear. The car's 0-62mph sprint time is placed at 5.4 seconds.

Pictures released before the car’s physical debut show that no styling changes will be made to signify the hybrid's different powertrain. That said, the LS 500h is slightly longer than the regular car, with a wheelbase stretched to 3125mm compared to the LS's 3090mm. Multi-link suspension will be standard, with air suspension featuring on high-end models. 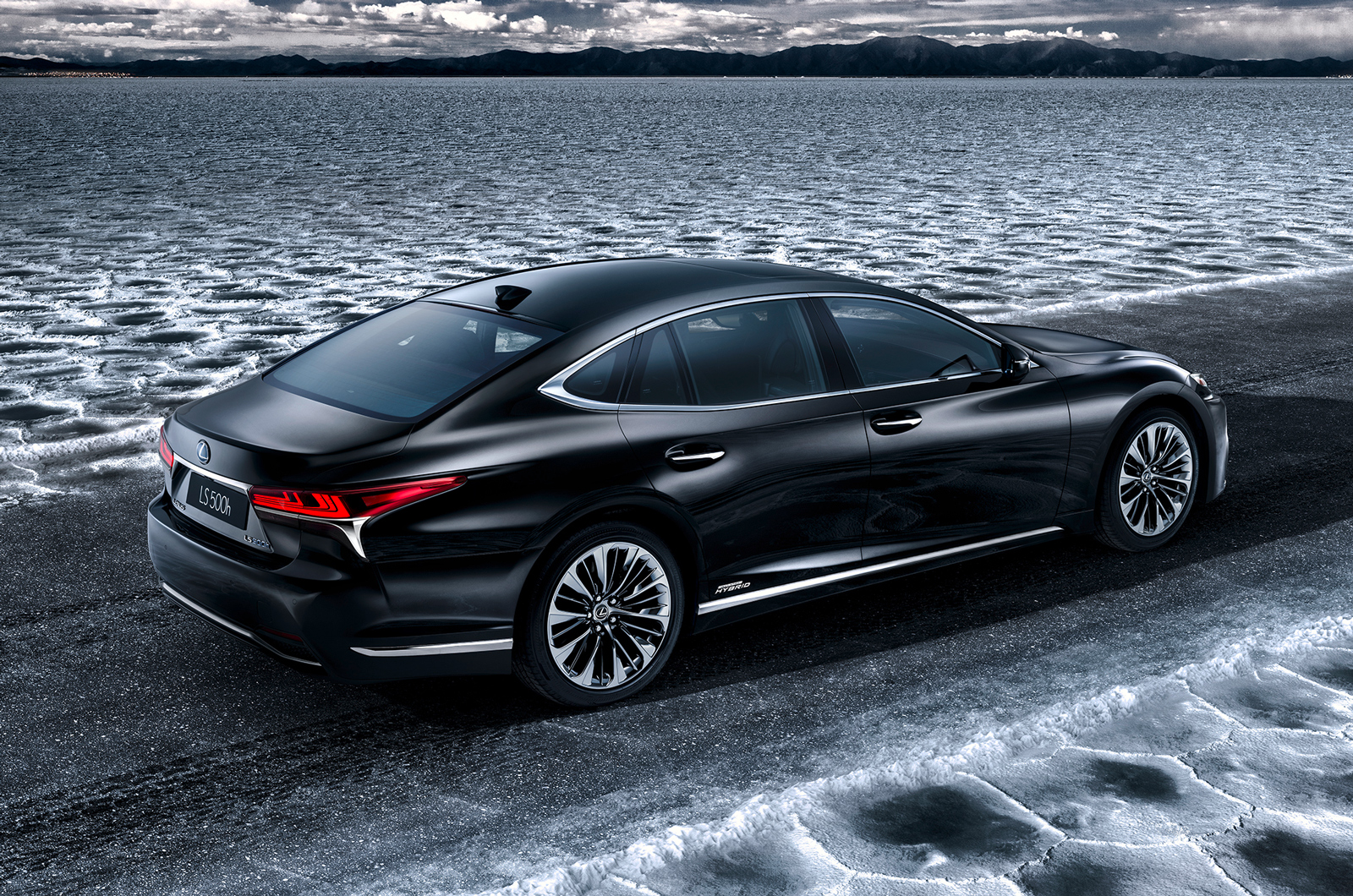 Compared with the outgoing Lexus LS, the new model is about 15mm lower, and its bonnet and boot are 30 and 41mm lower respectively, with Lexus’s designers striving for a ‘four-door coupé’ bodystyle.

Interestingly, while the regular LS will only be available with all-wheel drive, the LS 500h will be offered with both rear-wheel drive and all-wheel drive. Among the new car's safety features is a function which not only applies the car's brakes if a pedestrian is detected, but which can also steer around obstacles.

Inside, the LS comes with heated, cooled and massaging front and rear seats, and an optional rear seat arrangement can be specified which includes an extending leg rest.

Sales of the new LS range will start at the end of this year, with pricing set to be released nearer to that time. The outgoing LS costs from £71,995, but a small price increase is expected for this replacement.

Alongside the LC 500h is the 2017 RC F GT3 racing car (shown in the gallery above), which is makeing its European debut at Geneva. The model will compete in Japan’s Super GT series and the US's IMSA Weathertech Sportscar Championship from the start of the 2017 season.

The new LS looks stunning. I

The new LS looks stunning. I wonder if we will get the non hybrid version without the cvt/4speed torque converter box that sounds very confused. Maybe its better in action than it sounds
View all comments (4)