BACK TO ALL NEWS
Currently reading: 2016 Renault Scenic spotted testing in new spy pictures
UP NEXT
New Hyundai Bayon to launch in 2021 as entry-level crossover

The next-generation Renault Scenic has been spotted testing in the UK ahead of its planned launch next year. This latest test mule was spotted in Kent by Autocar reader Steve Gargano, with other mules also being sighted in Central London.

Renault design boss Laurens van den Acker has said the Scenic must be reinvented as a more practical, more modern vehicle or 'die', and this latest test mule gives more away about the car's design. As well as a completely revised front-end design, including new air vents and a prominent badge, the Scenic receives a boot-mounted spoiler at the rear with a larger boot opening than today's car.

Update: Fourth generation Renault Scenic unveiled at the 2016 Geneva Motorshow, with the aim of redefining the MPV sector

Speaking to Autocar at the Frankfurt motor show in September, van den Acker said: "I feel the Scenic is due an overhaul - a radical change. Remember Renault invented the segment but then launched evolutions of the theme in the second and third generations of the cars. During that time the segment has come under serious pressure, to the point that we must reinvent the Scenic or let it die."

Van den Acker said the new model would "challenge the sector," hinting that the Scenic may follow the route of other MPVs into becoming more of a crossover shape. Indeed, these early prototypes appear to be raised up compared to the current Scenic.

"There's still a long way to go, but once Scenic is out there, and our new D segment crossover is launched next year, we'll be in a position to start thinking about renewing and reinventing.

"It's hard, when you are used to starting revolutions, to think about keeping established codes fresh each time, but I think the key will be for us to mix it up as we have done already. Clio was faithful to the sector's codes, Captur was more innovative.

"Kadjar evolved what Capture had done but hasn't challenged any established practices, whereas new Scenic will challenge the sector for sure. Talisman is very traditional, Espace is something new. We can mix these ideas up.

"We still have a long way to go in my view. Yes, we'll have an all-new range soon, and evolving that brings a new mindset, but I don't see the end of the revolution at Renault just yet."

The new Scenic is scheduled to be launched at the Geneva motor show in March 2016, before going on sale in the UK later next year. 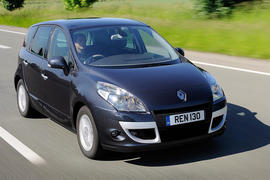 Well priced and equipped, the Renault Scenic is still a class act, even if it doesn't deliver the driving dynamics of a Ford Grand C-Max

So without being cynical will this car more than likely not just be a rebodied Nissan x trail which by happy coincidence has 7 seats... hope not as when we tried one it had the usual compromises of a smaller 7 seater -totally useless rear seats, small middle row middle row seat and smallish boot.
Adrian987 29 September 2015

So, when the Scenic RX4 was out (2000-2003), which segment was that in and would it now be called a crossover or SUV? I'm finding this all very confusing. I guess Renault were ahead of the game but the market was not then ready for that type of vehicle.
Jeremy 29 September 2015

If they make the new Scenic too much of a cross-over it will surely clash with the Kadgar? The Scenic traditionally scores with space and comfort, more so than the Qashqai/Kadgar twins, and the new Scenic will fail if Renault throw those babies out with the bath water.
Mikey C 29 September 2015

Yes, these cars sell on being

Yes, these cars sell on being sensible family cars with bags of room inside, for a lowish price.
Hence why VW sell both a SUV Tiguan and MPV Touran, they're different markets