Full pricing and specs have been released for the new Skoda Superb, which will rival everything from the Ford Mondeo to the BMW 3 Series
Share
Open gallery
Close
Share story

The new Skoda Superb was revealed at the Geneva motor show, and is being pitched as a rival to everything from the Ford Mondeo to the BMW 3 Series.

The Czech manufacturer has shifted just over 750,000 examples of its flagship since it was first introduced in 2001, and around 6000 were sold in the UK last year. Accordingly, the latest generation does little to mess with the Superb formula; there's only a modest gain in length over the car it replaces (28mm) and it's actually slightly shorter than the latest Mondeo hatchback.

However, the Superb moves to the VW Group's MQB platform architecture and sits on a much-extended wheelbase (it's 80mm longer than the old car's, and 94mm up on the latest Passat's) to build on the car's key strength: cabin and boot space.

The Superb's styling is typical current Skoda fare, with crisp, straight-edged creases along the flanks, a prominent front grille with vertical slats and slim headlights whose design is influenced by Czech cut crystal.

The cabin gets improved materials throughout, and while the rear legroom feels similar to the previous car's admittedly generous provision, you do notice improved rear head room and greater shoulder room for front and rear passengers.

Unlike the previous Superb, which offered a dual-mode boot opening, the new model gets a conventional hatchback. The boot itself is enormous; with the rear seats in place the capacity is 625 litres, 39 litres up on a Passat and 84 litres more than a Mondeo. The gap grows further when you lower the 60/40 split rear seats.

The engine line-up will be focused on diesels, starting with a 118bhp 1.6-litre unit that should emit around 103g/km of CO2 in manual form, or 106g/km when equipped with a seven-speed dual-clutch automatic gearbox. This motor will also be offered in more efficient, manual-only Greenline trim that will follow a few months after the main launch; the CO2 emissions of that edition are expected to drop to around 96g/km.

Petrol engines will continue to be offered in the UK, although they'll account for only a tiny percentage of sales. The two motors will actually book-end the range; the overall entry-level Superb will be a 1.4 turbo petrol with 148bhp and CO2 emissions of 115g/km, while the range-topper will be a 276bhp 2.0-litre turbo petrol, equipped with a seven-speed DSG automatic gearbox and four-wheel drive. It'll emit 164g/km of CO2.

Four trim levels will be offered in the UK. All editions will get at least a 6.5in colour screen, plus dual-zone climate control, City Emergency Braking and one of the previous Superb's trademark touches: a pair of pocket umbrellas concealed in the front doors.

Moving up from entry-level S to SE adds parking sensors and Mirrorlink functionality to the infotainment system, while SE-L brings navigation on the 6.5in screen. Skoda has yet to confirm a spec list for the range-topping Lauren & Klement edition. The options list will include a large sunroof, a neat tablet PC bracket for the rear armrest, three-zone climate control, Dynamic Chassis Control and 4G-based in-car wi-fi. 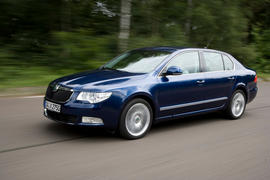 Order books for the Superb will open in the summer, with first deliveries expected in September. An estate model should be unveiled in late spring, and its rollout to customers should be about a month after the hatchback's.

I am getting a bit of a Lexus

I am getting a bit of a Lexus vibe with this, not sure if that is good thing or not....
Peter Cavellini 19 February 2015

Can't always thinking that Skoda is the poor relation here,you know?,always dressed in hand me down clothes,this car just looks like a re-badged Passat,a year behind Passat.
The Apprentice 19 February 2015

Taxi drivers will be wincing

Taxi drivers will be wincing with that boot lip drop, lugging cases over it. Might as well have made it a saloon.
View all comments (18)