BACK TO ALL NEWS
Currently reading: 2018 Renault Sport Megane to get manual gearbox and four-wheel steering
UP NEXT
Porsche Taycan: new rear-driven base model takes price to £70k

A new Renault Sport Mégane will be launched around 2018, high-ranking company sources have confirmed.

When asked about the possibility of a new Renaultsport-fettled Mégane, Renault design chief Laurens van den Acker said: “Yes, of course there will be one.”

However, while a manual gearbox and four-wheel steering is expected, there are no firm plans from the manufacturer so 2017 is the earliest the next-generation could go on sale.

The current Mégane RS will stay on sale until at least the launch of the new Mégane GT in 2016, which is the range-topping version of the standard car revealed at the Frankfurt motor show.

Patrice Ratti, boss of Renault Sport Technologies which fettles the French marque’s performance models, stopped short of confirming the Mégane RS but talked about the kind of technology future performance Renaults would use.

Significantly, the next Megane RS could benefit from the option of a manual gearbox. This would mark an about-turn for Renault, which has been stung by criticism of its decision to only supply the Clio RS with the EDC dual-clutch transmission, not universally loved among driving enthusiasts.

Autocar understands that Renaultsport’s influential European customer base is pushing for the return of a manual transmission option.

“When we made Clio the thinking was that the market would go completely towards EDC style units but the reality is there are still a lot of manuals,” said Ratti.

“The EDC move has done us a lot of good, opening up massive sales boosts in Japan and Australia for instance, our second and third biggest markets, but we now see that probably in an ideal world we would have both EDC and manual options.

“There are two different types of customer and we are doing the work now to see if we can justify going that way. There are no decisions and if I have to have one thenit will be EDC, but manual is possible.”

Ratti added that the next Mégane RS was likely to receive a power boost, but it would be in tandem with other technical developments and would not chase powerful front-drive hatches such as the Honda Civic Type-R.

“Its an ongoing process of improving everything - the steering, the suspension and so on, and part of that is always wanting more power.

“The [current] Mégane RS has gone from 250bhp to 260bhp to 275bhp, so more power is part of the evolution, even if the main focus is always the chassis. We don't need the most power but we do need the power to be part of the story,” he said.

The next performance variant will have different handling characteristics from the current Renaultsport Mégane, because the base car is 25mm lower than the car it replaces, has a 28mm-longer wheelbase and has wider tracks at the front and rear.

It seems likely the Mégane RS would also get the four-wheel steering system featured on the Mégane GT model.

While the GT isn’t a full RS model, it does incorporate new technologies developed by the Renaultsport division.

“It is the first time we've tuned such a system on a Renaultsport model and it brings many benefits at all speeds,” explained Ratti.

“It reduces the turning radius at low speeds and adds agility on winding roads, at high speed it introduces stability, so there is less adjustment and the car steers exactly the moment you turn and also that added stability means we can use shorter steering ratios to make the steering wheel much more alert. 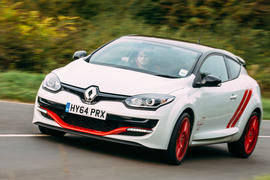 “Furthermore, it also does some of the job of the anti-roll bars, so the whole package can be less stiff. The benefits are numerous.”

Van den Acker, meanwhile, said that designing performance-oriented models involved “priorities that I, as a designer, need to respect”.

“From a design point of view it is quite interesting, but if I was being facetious I'd challenge whether it is a car that even needs to look good. The only codes that matter are whether it is fast, light and drives well.

“As a challenge, I'd ask if a Clio 3 RS is the best looker? It's not a pure beauty but it is a striking machine. Is a Renault 5 Turbo handsome? Not in the traditional sense but I'd love to have one in the garage,” he said.