BACK TO ALL NEWS
Currently reading: Volkswagen Eos axed from the UK
UP NEXT
2022 Mercedes-Benz EQE: images preview EV's radical design

Volkswagen Eos axed from the UK

The Volkswagen Eos coupé-cabriolet is no longer on sale in the UK.

VW said it is due to a "rationalisation of the range", with convertible versions of the Beetle and Golf already available.

Sales figures for the Eos have been in decline since the Golf cabriolet's launch in 2011.

VW first hinted that the Eos could be culled when speaking to Autocar at the Detroit motor show earlier this year.

The Eos was launched in 2006, a time when convertibles with retractable hard-top roofs were popular. However the market has since shifted back towards soft-tops for a combination of style and weight issues, and the Eos was one of few hard-top coupé-cabriolets left on sale.

At the Detroit show VW North America chief Michael Horn revealed that the market for convertibles was diminishing. 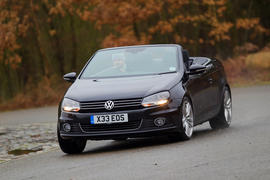 The Volkswagen Eos has much cachet and is pleasant and predictable to drive, but is feeling a little bit long-in-the-tooth

Around 11,700 across Europe since launch in 2012 , apparently. This is roughly similar to the Eos over the past three years, although the latter was a much stronger seller earlier in its life: it sold nearly 35,000 in its best year, 2007.
Daniel Joseph 15 June 2015

The fashion for these four-seater hard top convertibles is now well and truly over, with the demise of the Focus, 308, Megane and, now, the Eos. They were all pretty compromised, requiring huge rumps to accommodate the roof and, as Adrian987 pointed out, a huge windscreen with the header rail pushed far back to reduce the length of the roof. The mechanisms were heavy and the roofs not always watertight: the Focus CC was pretty troublesome in this regards. Actually, the Eos was probably the best looking of the bunch, IMHO, looking rather less fat a**ed than the others. It now looks like a good call by GME not to follow this fashion with the Cascada. Incidentally, does anyone know how the latter is selling? I've only ever seen one, and that was at my local Vauxhall dealership.
Overdrive 15 June 2015

I'm in mourning!
View all comments (7)