A video of the upcoming Toyota Supra appears to have been leaked by the firm's own Mexican marketing division, ahead of the car's official unveiling at January's Detroit motor show.

The new Toyota Supra has now been revealed. Click here for full details

The trailer appeared on Toyota Mexio's Twitter page, and was swiftly taken down again - but not before it could be reuploaded to YouTube by fans eager for the Mk V Supra.

Read our review of the 2019 Toyota Supra prototype

The video shows the car from all angles, revealing that the design of the 2019 Supra is, as expected, substantially in line with the previously seen concepts and prototypes. Some of the excesses of the FT-1 and Supra Racing concept cars substantially pared back, but the car retains its distinctive, sporty look.

According a title card at the end of the clip, the car will be called the Toyota GR Supra, a nod to Gazoo Racing, the firm's sporting division which has both produced road cars such as the Yaris GRMN and runs the firm's World Rally Championship team.

Previously - as part of an official teaser campaign - a video had been released revealing the note of the Supra's 3.0-litre straight six engine.

The short video on Toyota Europe's YouTube page also featured blurred action of the Porsche Cayman rival in action, but the focus was on showcasing the sound of the BMW-derived engine. Toyota described it as highlighting "the sound of its harmonious song."

The latest leaks follow on from an earlier detailed shot of the Supra's front end, taken when the car was on a transporter, published on forum dedicated to the new car and in our gallery above.

Deliveries of the new sports car will begin soon after the Detroit reveal, Toyota has confirmed, with the first cars due to be seen in the first half of next year.

The Supra name will be back on a Toyota sports car for first time since 2002, development of this model having taken place alongside the new BMW Z4. Development started in 2012 as one of a series of projects between Toyota and BMW. 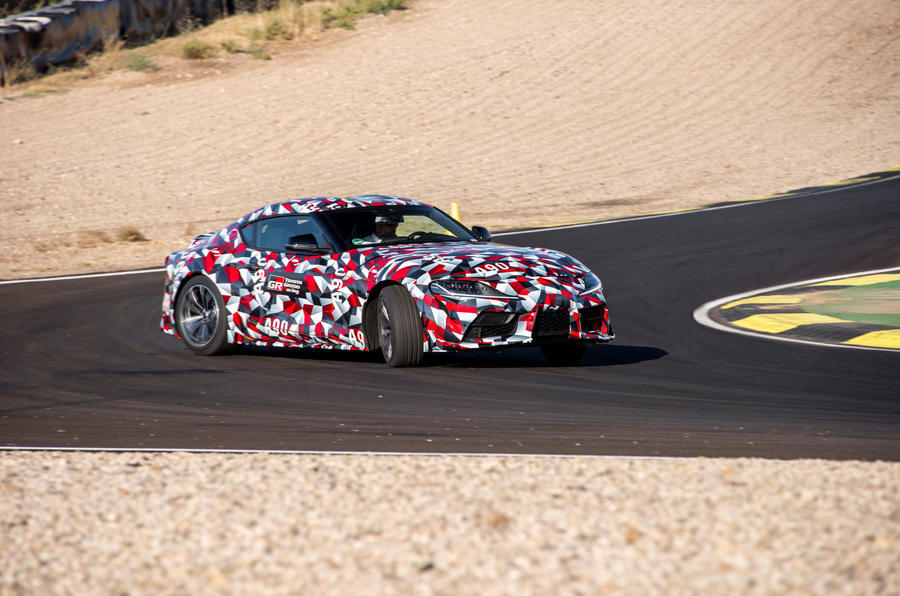 Power comes from a BMW-sourced 3.0-litre straight-six engine with around 340bhp and 350lb ft. Drive is sent to the rear wheels through an eight-speed ZF automatic transmission.

The Supra, which also features a BMW M Active limited-slip differential, weighs around 1500kg and has a 50:50 weight distribution, its body constructed of a blend of steel and aluminium.

The model's lengthy gestation period has led to a series of leaks and drip-feed of information in the build-up to its hotly anticipated launch. Previous images that surfaced on a parts catalogue site showed three different wheel sizes for three different specs, as well as the availability of turbocharged four-cylinder and six-cylinder engines.

Key detailed elements of the Supra's styling such as the front lights, bumper, dashboard with digital instrument display, rear bumper and splitter were shown separately, giving more hints as to what the car will look like. It also suggested the car will feature the distinctive, script-like Supra logo seen on the previous-generation car.

Chief engineer for the project, Tetsuya Tada, previously told Autocar at the Goodwood Festival of Speed, where the car made its dynamic debut, some of the tech specs of the new model.

“I can’t disclose specific figures, but the output of this engine is on a par with that which we have with the F-Series from Lexus,” Tada said. "The RC-F and GS-F make 389lb ft," he continued, “but you can imagine from seeing it that the car is light and compact – its wheelbase is even shorter than the GT86’s. It’s around 200-300kg lighter than the F-Series [which weighs around 1700-1800kg].”

While Lexus’s 5.0-litre V8 is naturally aspirated and makes its peak torque at nearly 5000rpm, the BMW-sourced turbocharged straight-six unit is likely to produce its peak power in the 2500rpm range.

Tada said that the Supra will be neutrally balanced and perhaps even more focused than the GT86 sports car, for which he was also the chief engineer. “The centre of gravity is lower than the GT86’s,” Tada said, “and body rigidity is twice that of the GT86.”

As with the GT86, insiders have stated that driving pleasure will rank above outright performance. Tada told Autocar earlier this year: "It's really fun to drive this car. Front engines, rear drive… with such a concept, you can have the greatest amount of fun to enjoy a drive in the world. It's fun on the road as well as the race track, the autobahn and the English countryside."

Tada emphasised that the Supra and Z4 will be very different from one another, suggesting that while they share several common parts, their handling will differ by quite some margin. He said: "It's different to the Z4; they are two different cars. We didn't start by finding common parts. We worked on our own ideas to see what cars we wanted to create, then we shared ideas to identify where we can share common parts." 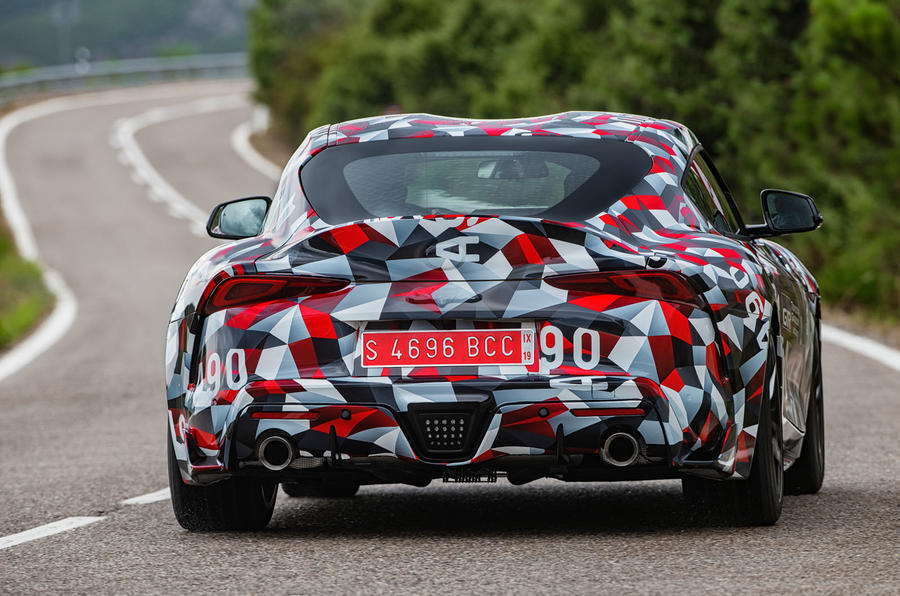 An earlier sighting of the Supra's interior showed BMW switchgear, including a dashboard-mounted infotainment screen and accompanying rotary dial controller on the central tunnel, as well as BMW heating control buttons and a BMW automatic gear selector. Toyota might fit its own parts to the final car's interior, but this sighting suggests the electrical architecture beneath will be based on BMW's systems.

Toyota hinted at the performance focus of its upcoming sports car with the reveal of a GR Supra Racing Concept at this year's Geneva motor show. That model, which was badged under the firm's performance arm, Gazoo Racing, was a pared-back and more hardcore version of the Supra.

Toyota executives have previously revealed intentions to produce several variants of the Supra with different power outputs, suggesting the motorsport-inspired concept revealed at the 2018 Geneva motor show was hinting at a future range-topping version, likely to be badged as a GRMN. Toyota is also likely to widely race the new Supra in sports car championships worldwide.

A hybrid version of the car is also predicted to come as part of the BMW tie-up, with both the Supra and Z4 due with electrified four-wheel-drive powertrains at a later stage. Both BMW and Toyota are experts in high-performance hybrid power, with the former having launched the i8 back in 2014 and the latter competing in the World Endurance Championship and winning Le Mans with its TS030 Hybrid. Toyota's racing-derived energy-storing supercapacitors are due to be fitted to the Supra to power its electrified drive hardware.

First previewed by the FT-1 concept of 2014, the design of the next Supra is slightly toned down compared with the concepts that have preceded it. While the FT-1's overall silhouette is familiar, with the headlights, tail-lights and double-bubble roof remaining, the car does away with aggressive features such as side air intakes and a fixed rear wing.

The new Toyota Supra has now been revealed. Click here for full details

In pictures: the Toyota Supra story

Is it just me, or has the new Supra been on horizon for several years now?
Peter Cavellini 12 January 2019

I’ve just noticed how awkward looking out the rear window is, I’m sure it could have been better designed, quite a few blind spots.....?

When we get to see images of the latest Cars , we don’t get any idea of how big,small they are, this Supra looks GT86 size, but is it?, if they sai£ it’s about the size of BMW 3-Series, then you’d know roughly how big it is, but, in images with the Camo decal job it’s difficult to gauge size.