BACK TO ALL NEWS
Currently reading: BMW M boss says M2, X3 M and X4 M in development
UP NEXT
New Hyundai Bayon to launch in 2021 as entry-level crossover

A BMW M2 is set to be launched as part of an expanded range of BMW M cars that could also include M versions of the X3 and X4, new BMW M boss Frank van Meel has revealed at the Detroit motor show.

Van Meel, who recently made the switch from Audi’s RS division to head up BMW’s M range, said the previous 1-series M Coupé is a car he is very fond of, and therefore is a car “he’d love to do something in the direction of again”.

Spy photographers now regularly catch M2 prototypes in testing, but van Meel stopped short of officially confirming the model for production. Van Meel was less enthusiastic about the idea of an M3 Touring or flagship M7 - his vision of the perfect embodiment of an M car is the current M3/M4 - but he was more open and optimistic on the chances of M versions of the X3 and X4 making production.

“There are more opportunities than at present,” he said, “but not on every BMW as it makes no sense.

“There might be a business opportunity with the X3/X4,” he added. “We’re continuing our success story with new versions of the X5 M and X6 M.”

However, van Meel did confirm that four-wheel drive would reach future BMW M cars, with the next-generation M5 and M6 being the most likely candidates. But he said the models would still be rear-biased, and the technology would be used to increase traction in order to avoid the understeer traits with which all-wheel-drive performance cars are associated.

“The philosophy will remain rear-wheel drive, even if there is all-wheel drive,” he said. “As we increase power and torque, then the M5 and M6 will have large outputs, so we’ll look at those solutions [all-wheel drive] with these cars in the future.”

Manual transmissions will only continue to be made should there be market demand for them, van Meel revealed, with sales suggesting they were on their way out.

Van Meel poured cold water on the chances of any future M version of a BMW i car, saying instead that any collaboration between the two bookends of the BMW range would be through shared technology such as carbonfibre.

However, M division was investigating the possibility of electrification of its future range. “We’re looking at all kinds of technologies, including electric solutions, but this must sit under clear M properties," said van Meel.

Electric turbochargers were being investigated, he said, as a way of improving throttle response. “We’ve already taken steps to improve throttle response with our V8,” said van Meel, “but we can improve further still with electric turbos. The philosophy has to be right to fit in with M, but yes, this is technology we’re looking at if we can make it fit.”

He was less keen on the idea of a front-wheel-drive M car based on BMW’s new UKL1 platform, although an M Performance version of a model in this range would be possible “if we can make it sharp enough”. 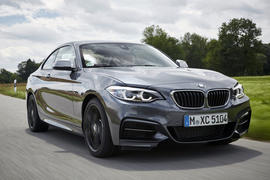 Four-cylinder engines for M cars were something else he isn’t keen on, saying the dynamics of such an engine were not in keeping with M’s philosophy as they’d be too highly stressed and not refined enough. But combining them with electric power would change this, although “you wouldn’t be able to lap the Nürburgring” without depleting the range.

“They are not part of the short term for M,” he added.

BMW celebrates its centenary in 2016, and van Meel said M was “eager to support the event”, without going into specifics.

BMW M exists and is better than ever, at least if you look at number of sold cars and market share. Despite many saying BMW is not what it once was and M-car not being M-cars anymore, BMW keeps growing and M-cars are still the preferred high performance coupes and sedans.
To look at the light M-cars of the 80.s and say today's M-cars are heavy and not sporty enough is simply wrong. ALL cars are now bigger and heavier compared to the 80:s thanks to new regulations and a lot of new electronics that did not even exist 20-30 years ago and are mandatory/necessary now.
So yes, BMW and M exists and are growing.
david RS 14 January 2015

The spirit of M is drifting

The spirit of M is drifting far and fast. Would be more appropriate to call them XR2, XR3, XR4.
View all comments (5)