BACK TO ALL NEWS
Currently reading: Kia launches new brand for autonomous vehicle technology at CES
UP NEXT
New BMW M3 Touring due in 2022 to rival Audi RS4 Avant

Kia is stepping up its development of autonomous vehicles with the launch of the Drive Wise sub-brand, with its first fully autonomous car due to arrive before 2030
Share
Open gallery
Close
Share story

Kia has launched a new sub-brand to develop and showcase its advanced driver systems and future autonomous technology.

The new brand, named Drive Wise and announced at the Consumer Electronics Show in Las Vegas, is the latest step in Kia’s development of autonomous driving technology. The Korean brand plans to introduce cars with partially autonomous driving functions by 2020, with full autonomy featuring in production cars by 2030.

Among the future technologies to be badged under the Drive Wise banner are autonomous motorway driving and the so-called Preceding Vehicle Following, which is an advanced lane-keeping system that monitors the vehicle in front and allows the car to calculate a path relative to it.

Other technologies include an emergency stop system, which can bring the car to a halt if it detects the driver has fallen asleep at the wheel, a traffic jam assist function allowing the car to move freely through lanes of traffic and an autonomous parking system.

The new interface is being showcased at CES in an ‘i-Cockpit’ display. Kia says the system can recognise a driver and load their infotainment preferences upon starting.

The next stage of Kia’s autonomous vehicle development will involve testing on public roads in the US, and the brand has recently been granted a licence to run driverless cars in Nevada, using the Soul EV as a test bed.

Kia says the launch of the Drive Wise brand will allow it to “introduce intelligent safety technologies to its future model range, helping to eliminate potential dangers - and, for many, the boredom - of driving, while changing the ways in which owners interact with their vehicles”. 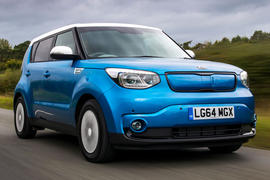 Smooth, refined and responsive, but some way behind the EV models from Mercedes-Benz and Volkswagen in nearly all areas

If they've a brand name and a date

6 January 2016
Can they take a guess at the cost of a truly autonomous Kia car would cost £40,000 upwards? p.s. autonomous parking systems already exist, Ford have had them for years but hardly anyone wants to pay the £1,000 or so for it.