First displayed last year, the two machines take the form of compact, boxy vehicles with advanced self-driving technology intended for shared mobility usage. While the Hyundai Motor Group is working on autonomous shared mobility vehicles, both the M.Vision Pop and M.Vision 2GO are intended to showcase technology, systems and parts that Hyundai Mobis is developing.

That includes the firm’s e-corner module system, a technology that Hyundai Mobis has been working on since an early version was first shown at CES in 2018. The system integrates the steering, braking, suspension and driving systems into a wheel, which removes the need for a mechanical connection between parts.

Hyundai Mobis claims that the e-corner module allows for both better use of space inside a vehicle and a 90deg and in-place rotation of the wheels. It is capable of rotating 360deg and sideways driving, which Hyundai Mobis believes will make tasks such as parking far easier for future smart vehicles. 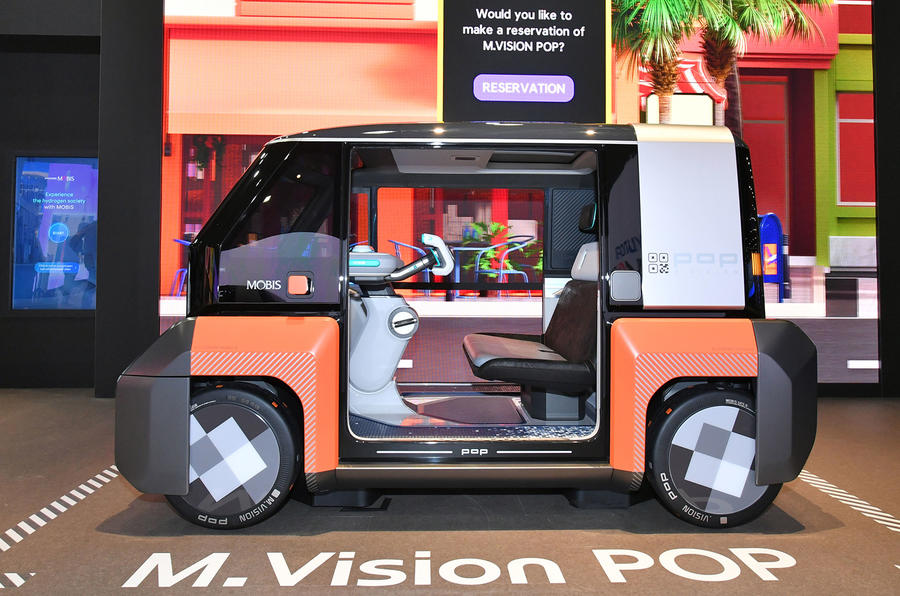 Since the system was first shown in 2018, Hyundai Mobis has developed a new ECU that allows for greater control, and the firm is now beginning reliability verification ahead of a feasibility study for mass production. The company estimated the system will be installed on a working skateboard chassis by 2023 and will work with automated driving by 2025.

Hyundai Mobis has released few other technical details of the M.Vision Pop and M.Vision 2GO, although it does appear both have been designed to use the folding steering wheel that the firm recently showcased.

It has previously said M.Vision Pop is designed for ‘phobility’, which stands for phone and mobility, because it is operated by docking a smartphone into the car’s steering wheel.

The machines are on display at CES, with visitors invited to take virtual rides in a virtual ‘Joytown metaverse’. That links the wider Hyundai Motor Group’s presence at the tech show, which have been focused on mobility robots and the opportunities presented by a virtual metaverse.