BACK TO ALL NEWS
Currently reading: Ford B-Max price cut amid poor European demand
UP NEXT
Analysis: Subaru staying in Europe despite 2020 "disaster"

Ford has added a new range-topping variant of its B-Max compact MPV and cut prices of two mid-level trim specifications by up to £1000 amid reports of weak demand for the new model.

A Ford spokesman told Autocar the price adjustments were "a reflection to accommodate the Titanium X trim level", rebutting the suggestion that the B-Max was suffering from poor sales in Europe.

The Romanian factory where the B-Max is made recently announced it would be stopping production for four days in February, with Ford officials quoted as saying the decision was due to low demand. Around 68,000 Ford cars are made per year at the Romanian plant.

The Blue Oval sold 15,896 units of the B-Max in the UK last year, according to SMMT figures, beating sales of the Note by some 3354 units. 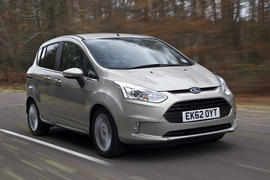 we looked at the b max - my wife currently has a fiesta and loves it but its a 3 door so the doors are very wide.

Biggest problem is the boot - its not big enough for a push chair - we wanted the car - but my wife hates the c-max - think its too big and just not a fan which is why we looked at the b max - so ended up with a pug 2008 instead.

This must be worrying for Ford, but their whole model range as a whole is not quite as good as in previous years... 6/7 year old Ka and Fiesta, a Focus which is less successful than previous versions, 5 (I think) confusing MPVs, a Kuga which is also less successful than the previous version, and a 7 year old Mondeo (oh and the EcoSport). Back in 2008 it even looked like Ford were in a position to take on VW and go more 'premium'.

From a marketing perspective the B-Max should have been pitched as the Fiesta B-Max (as with the original Focus C-Max), and be adorned with the corporate cheese grater so they don't already look second-hand. Probably won't be long until you can get one new for sub £10k.

I went to look at the Bmax a year ago during it's introduction and the big adverts on Tv. I found none of four local dealers had one inside the showroom. Yes, they had a model outside as a demo but, who wants to view a car in the freezing cold. One Warrington dealer couldn't find the keys to open it and allow me a peep inside. A dealer in Leigh, who's showroom was full of Fiestas said that nobody will be interested in that model, it's too expensive. I wrote to Ford headquarters and they said that they cannot control what their dealers display. I half expected one to arrive on my door-step for me to play with....but it didn't. I bought another brand instead.
View all comments (5)