BACK TO ALL NEWS
Currently reading: Analysis: How Volkswagen is tackling new software challenges
UP NEXT
Insight: what we've learned from June car sales

The software issues that have hampered the build-up to the launches of Volkswagen’s new ID 3 EV and eighth-generation Golf demonstrate how important such systems are to modern cars – and how complicated they have become.

The software required for the previous Golf contained around one million lines of code – compared with 10 million for the ID 3. For companies traditionally focused purely on building the mechanical elements of cars, that increasing need for software presents a dilemma: do they buy in the new software that’s needed or make it themselves?

The Volkswagen Group has bet heavily on the latter, creating the new Car.Software unit, which officially becomes fully operational today. Headed by Christian Senger, who was previously in charge of the firm’s ID models, by the end of this year it will encompass 5000 staff gathered from various Volkswagen Group brands. By 2025, it plans to employ more than 10,000 staff worldwide – half of them in Europe, around a third in China and the rest in the US, Israel and India.

The Volkswagen Group’s goal is to raise the proportion of its cars’ software produced in-house from less than 10% currently to 60% by 2025. Senger said the easy path would be to focus on vehicle production and use the group’s scale to negotiate competitive supply deals with software providers, especially tech firms that are working on their own automotive operating systems, such as Apple and Google. But that was “out of the question” for three key reasons. 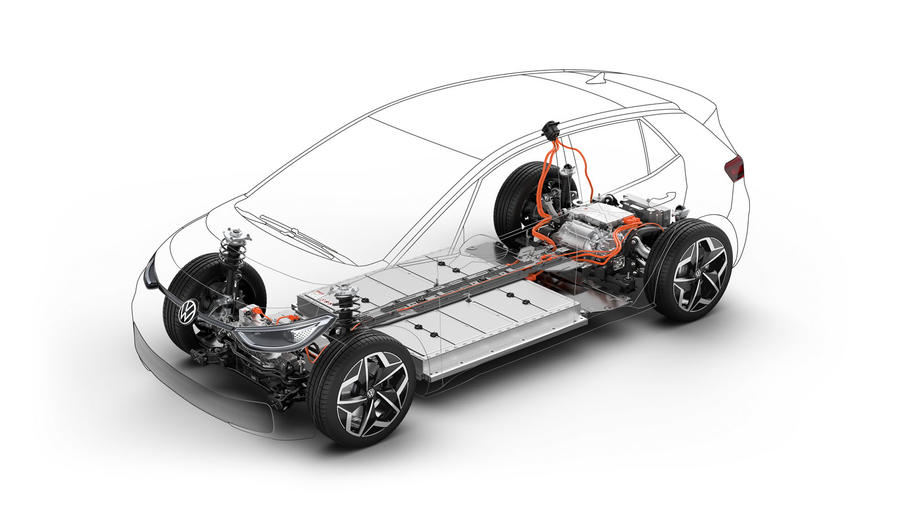 The first is manufacturing experience, which Senger said differentiates the group from “competitors outside the industry”. The second is the firm’s desire to “retain control of the entire vehicle architecture”. Senger said this is “the only way to ensure longterm competitiveness”.

The Volkswagen Group also believes that the huge number of vehicles it produces will give it a major edge. Senger said: “Scale is everything in software, in both cost and learnings from data. Software needs significant numbers of users to become powerful and efficient, and the number of cars we produce offers that.”

The software that the group develops will extend far beyond visible systems such as infotainment and driver assistance systems. Key will be development of VW.OS, a standardised operating system for all group brands. This is essentially the software equivalent of a vehicle platform such as MEB, on which ID cars are built, and it’s described by Senger as “the new crankshaft the whole business is built on top of”.

This will be twinned with the Volkswagen Automotive Cloud, which will contain data on every future Volkswagen Group car sold and underpin online services and updates.

As with a vehicle platform, VW.OS will be highly adaptable, allowing it to function differently in different types of cars at different price points. Senger compares it to how a £50 smartphone uses the same operating system as a top-spec £2000 one but offers a very different experience.

Senger said that a key goal of VW.OS is that “customer experience will be influenced more and more by software, so it will become core for customer decisions [on cars]”. He added: “The car of the very near future needs to feel like a smartphone.” 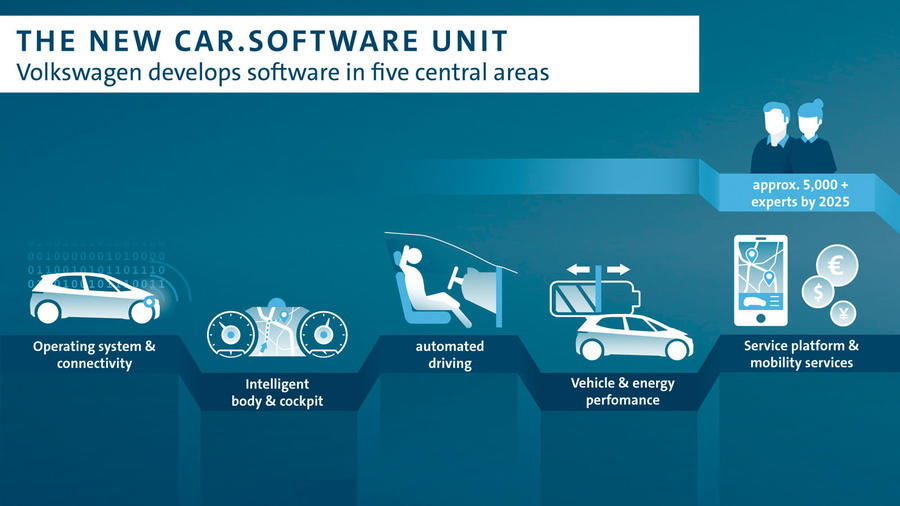 While the group is aiming to greatly reduce its dependence on external systems, the increase in the computing required means the total amount of external software in its cars will increase, even as the percentage declines. Senger said: “Partnerships will be even more important, but the key is that we will control the partnerships in specific technologies and areas. We will define the software standards and the road map.”

At a surface level, for example, that means firms developing third-party software for infotainment systems will be required to build it to a set design and functionality template.

Senger wants to take an ‘open-source’ approach to software development, potentially licensing the system to other car makers. VW.OS will support wireless updates, allowing the group to upgrade its cars far more regularly than in a traditional car product cycle. Senger said: “With an ageing car, you can’t do anything about its styling. But with updates, the software can stay up to date.”

For a time, at least: Senger admits that, as with smartphones, ageing cars will eventually be unable to process the latest software. However, he pledged that they will be able to continue running after that point.

In the future, such systems will also offer a potential revenue stream through the sale of digital services. Senger said: “Mobility services have a chance to be a huge revenue source, but at this time they’re far from being a core business.” 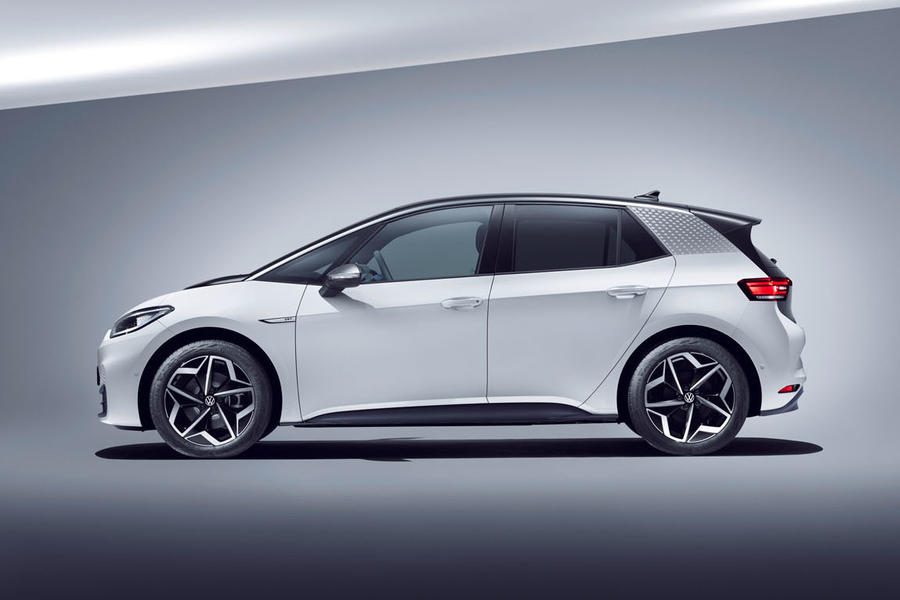 The Volkswagen Group has lofty goals for Car.Software, but the ID 3’s issues show the challenges car makers face in becoming software firms. When asked about those issues, Senger responded: “We’re at the forefront and starting a forward, unique solution that software becomes its own product in the automotive industry.”

He added that the adoption of VW.OS will remove the need to develop a separate architecture for each vehicle.

The Volkswagen Group is some way behind tech-focused rivals such as Tesla in taking a software-centric approach, and it has a major challenge to catch the industry leaders. But as with its heavy investment in electric cars, it’s again betting that sheer scale will allow it to quickly make up lost ground.

in  vw speak, as per their nrm, they will release under devloped products and allow the customer to be the guinea pigs. Wasnt it dodgy software that got them in a whole heap of trouble with dieselgate..

29 June 2020
Become normal practice f o r non safety critical s/w. But this is a big project. In industry terms it's very aggressive, and as the article says, they've normally oem their code.
Been looking at the id3 but very sceptical. I wouldn't hold tesla up as a paragon of SW quality, and they've been doing it on a larger scale for longer.

So they are selling the new

So they are selling the new Golf and ID with not so up to speed working software. Clever hey , back to dealers you go , how many times and then to be told Oh Sir its your fault , it knowing we sold it to you with a underdeveloped software  issue Bye Bye  . Have read that their aftercare  is well to fair not good in all current customer satisfaction surveys The future is not too bright in the ownership of VW products is it especially as dieselgate is still to be in the not  closed  section of those awaiting compensation for let me think are yes lyng and cheating to customers on and on it goes.

Looks like VW is following Elon's vision that software is one of the fundamental platforms of VM responsibilty.

Surprisingly excellent article, insightful interview. I'm sure there is more to this than VW is admitting at this time. I'd like to know more about what the 10,000 staff will be working on. I'd bet there are some fascinating projects on new revenue streams through both in-car services and data sales to third parties.

Do you have any news from any manufacturers apart from VAG. It's not surprising given that the company sat it's "smug ass self" on diesels that were never gonna work correctly since you couldn't be bothered to engineer that either.

29 June 2020
Poor Volkswagen must be struggling to find software cheats for electric cars. They will find the cheats in time. Only then they will face the real challenges of making electric cars. Truth is VW is beginning to look like toad kill.