BACK TO ALL NEWS
Currently reading: Hyundai ix35 Fuel Cell long-term test: an attention-grabbing eco car
UP NEXT
Supercars to e-bikes: the story of Romans International

If you swap cars reasonably often, or have done so recently, you’ll be familiar with the sensations of getting comfortable with a different vehicle over time.

A gearshift that at first seemed too long soon becomes second nature, for instance, or a grumbly engine that shocked you moves to being background noise. Never is this more true than when you jump in an electric car.

Suddenly, you can hear the rumble of tyres on the road for the first time, because it isn’t drowned out by engine whine, for instance. You can pull out of junctions where you’d not even have risked it in a sports car, such is the instant torque. And, I must admit, in my case there’s an undoubted calmness and composure that descends on my driving, especially in town, such is the peace and ease of travel. For a while, I pondered if this was the cause of another phenomenon that I encountered while driving the Hyundai: namely, that I seemed to induce minor road rage in drivers of high-powered vehicles. First, there was the Volkswagen Golf GTI driver who felt compelled to overtake down a high street, and then a BMW M3 driver who had to share his views at some traffic lights.

Why so? Partly because of the aforementioned junction escapes. Other drivers aren’t calibrated to the electric motors and think you’ve taken a risk, consequently getting annoyed as they jam on the brakes to avoid what they think would be a certain crash. Partly it’s because I tend to drive more slowly, largely because I’ve become alert to saving power, by freewheeling up to red traffic lights, for instance.

But the biggest reason, I’ve concluded, is because of the daft stickers that adorn the ix35 to ensure that it is a mobile billboard for the clever technology that lies beneath the highly conventional metal. I’ve no problem with them, but it seems like they are a red drag to a bull to many drivers who feel that anyone who needs to shout about their eco credentials needs to be taught a lesson. Note to self: if you want to be a peace-loving eco warrior, don’t force your lifestyle on others.

“I think there’s something wrong with your car,” said a woman, seeing clouds of steam emerging from the tailpipe of my just-parked ix35 one cold morning. Her fears were raised further by the stickers declaring its hydrogen power. No fear: after a cold run, fans blow all waste water through the fuel cell, lest it freeze, expand and cause damage. It comes out warm, hence clouds of steam in the cold.

The name should give you some clues: the ix35 preceded the Hyundai Tucson, which was deemed to be such an overhaulthatitdeservedawhole new personality. That means the ix35 – off sale in regular form in 2015 – looks and feels a bit dated on the inside. There are more hard plastics than you might imagine and the switchgear is short on some finesse.

Frankly, though, as a parent of two under-10s, I quite like that it is pretty hard-wearing inside, and I have few quibbles with the seat comfort or ease of use of the sat-nav and infotainment system, the two interior qualities I value most highly. That said, the interior is a league behind that found in the hydrogen-powered Toyota Mirai and there is an argument that a cutting-edge car ought to feel it.

Perhaps more strikingly, the steering wheel is on the ‘wrong’ side. There’s no economic sense in producing right-hand-drive cars for so few sales so it’s a compromise with which buyers must live, Hyundai says.

After a settling-in period, I’ve not found it to be much of an issue.

Beyond that, the boot space is mildly reduced by the presence of the fuel cell in the back. Although the official stats put it at 436 litres (155 litres down on the standard ix35), it hasn’t stopped me using the boot once.

All in, then, like all electric vehicles, the futuristic bits you can’t see do little to detract from the fact that this remains a car-like car, albeit with environmental benefits and the joys of instant torque and near-silent travel. The ix35 makes for decent family transport and I could well see it as a practical delivery car or taxi, should the powertrain-I-can’t- mention – tax benefits and all – make more business sense when weighed against the asking price.

There’s a slight step up in the ix35’s boot floor. It’s necessary to accommodate the 104-litre hydrogen tank. If you could still buy an ix35, you’d compare the standard car with this one and note the reduction in boot space from 591 litres to 436 litres. As it is, I’ve yet to discover a situation in which the ix35 FCV can’t cope, even when carrying four people and their luggage.

Chances are you know that a hydrogen fuel cell car produces only one tailpipe emission – water. And  if you didn’t know, you soon would  if you followed me in the ix35 FCV, with its side graphics and pertinent rear window statement, as well as an occasional but pronounced expulsion of water from the tailpipe.

But the ix35 also purifies the air as it travels along, collecting harmful particulates and trapping them as a byproduct of the process of generating electricity via the hydrogen fuel stack’s inner workings. Keep the filters, humidifier and fuel cell stack properly serviced, and you can have a positive impact on local air quality. 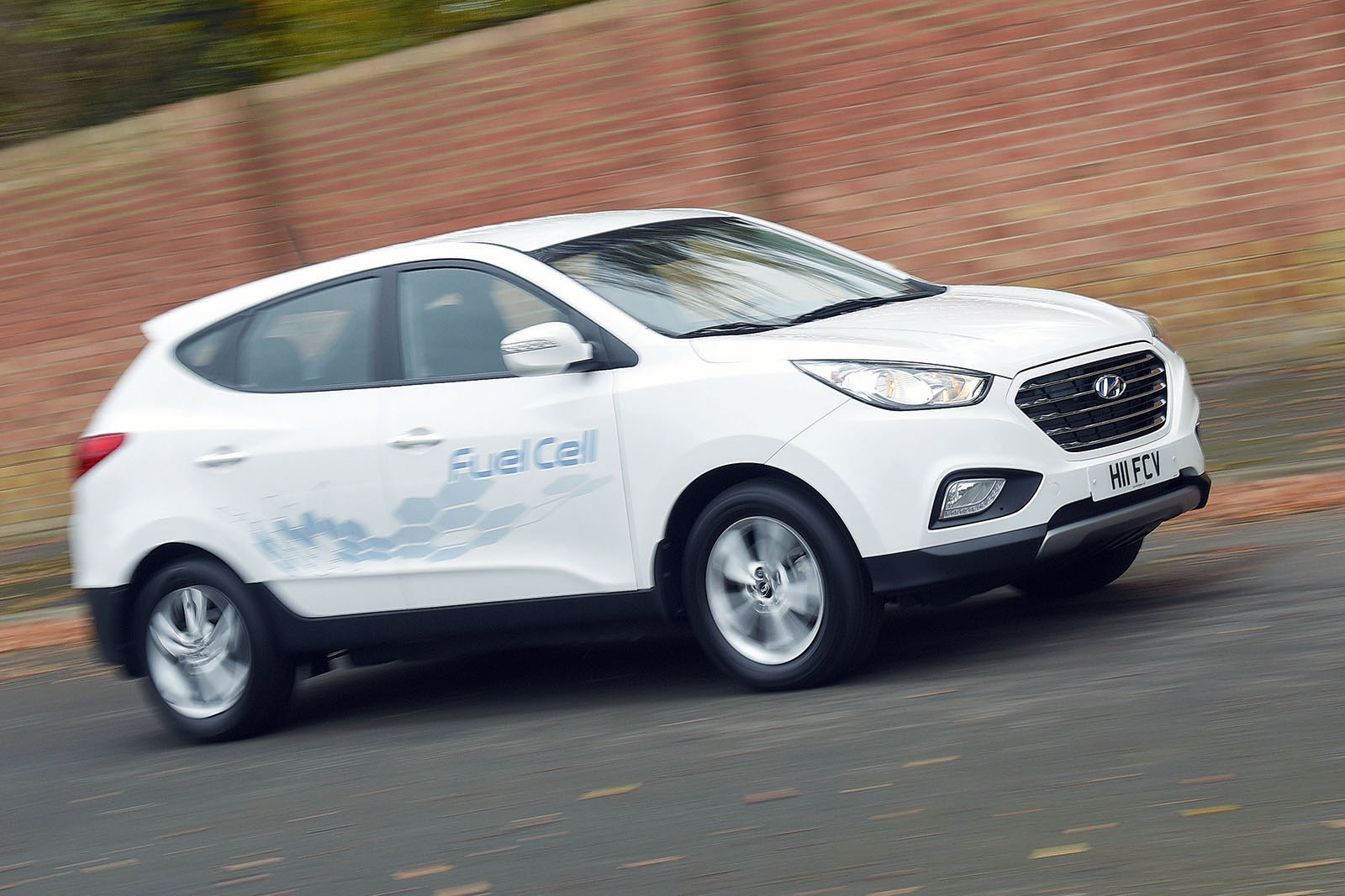 To demonstrate this, Hyundai  has produced a video that involves filling a giant polythene ball with  air, topping it up with a mixture of particulate pollutants of various sizes to match the equivalent of what a typical human would breathe in over 100 years and then sucking them through the ix35 FCV’s system.

The expelled air is pumped out of the tailpipe into another polythene ball, which the firm’s senior R&D representative then sticks his head in and inhales enthusiastically. Bar water vapour, it’s entirely clean – and further proof that environmentally friendly transport needn’t be a myth.

The limitation of hydrogen fuel cells

The Hyundai is a remarkable car thanks to its hydrogen fuel cell, yet it is positively unremarkable to live with. For all the technical wizardry going on out of sight, I am going from A to B with scarcely a care in the world.

With the refuelling infrastructure in its infancy, there is the issue of range anxiety, but even that’s hardly an issue. I can comfortably get 200 miles from a tank, so I haven’t ventured beyond the Heathrow and Teddington fuel stations in southwest London. But should I need to, existing fuelling stations make trips to the south coast, west Wales or as far north as Sheffield possible. 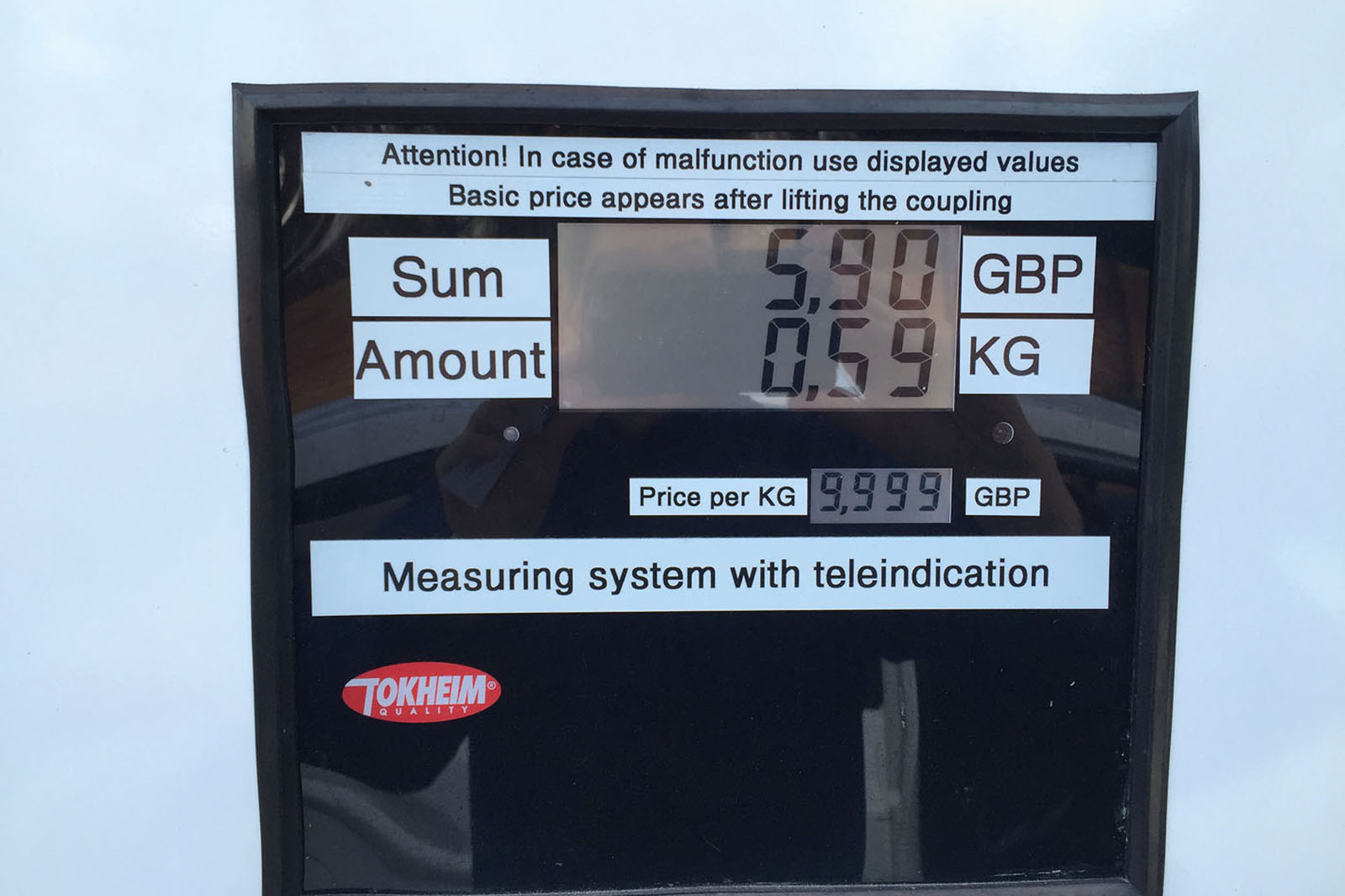 But there are barriers, because, as with battery-electric cars’ charging points, not all fuelling stations are run by the same people or on the same terms. You need to pre-plan journeys and make sure you’re registered to access the fuelling stations, and therein lies an infrastructure challenge that needs addressing. I’ve no doubt the issue is holding back EV adoption, and it has the same potential to restrict the uptake of hydrogen cars.

Likewise, I’ve had to adapt to how the ix35 uses fuel. As you’d expect, as speeds rise, so does consumption. In Eco mode at 60mph on the motorway, it uses fuel pretty much as indicated – a mile for a mile – but go faster and it drains exponentially. The same is true of other EVs and, in truth, fossil fuel cars. Mentally adjusting to this has taken time, but there’s an argument that all drivers would do well to learn the lesson of haste versus speed and the economical and environmental benefits of it.

Refuelling is now second nature. It takes about seven minutes from activating the security gates to leaving again and, clanking and chugging of the pump aside, it’s very similar to refuelling the old-school way, and the per-mile cost is working out at the equivalent of about 60mpg.

That BMW M3 driver wasn't me

Not as in ECOnomic.  Autocar It's not the equivalent of 60mpg it's 23mpg and you know it so does Hyundai.