Back in 1992, we got behind the wheel of this pocket-sized sports car
Open gallery
Close

Hoping to steal some crumbs from the Mazda MX-5’s table, Suzuki introduced a smaller, cheaper but still entertaining kei-car roadster to the UK.

Light-hearted looks cloaked a serious spec, including a front-mounted, 12-valve, three-pot engine with an intercooled turbo boosting up to 12.8psi. Despite a heady 9300rpm cut-out, there was real urge from 2000rpm. A 679kg kerb weight and close-ratio, short-throw gearbox brought swift acceleration, although top speed was artificially limited to 83mph. Still, goading the engine was fun and the brakes were powerful.

The Cappuccino featured allround independent suspension, rear drive delivered via an LSD and a 50:50 weight distribution, which allowed swift turn-in and throttle-adjustable mid-corner balance. The ride was fine when cruising, although it fidgeted over smaller bumps.

The tiny boot, narrow cabin and a driving position inhospitable for six-footers were shortfalls, but the three-piece aluminium roof allowed Targa-style and fully open layouts. The car’s price was ambitious, mind. 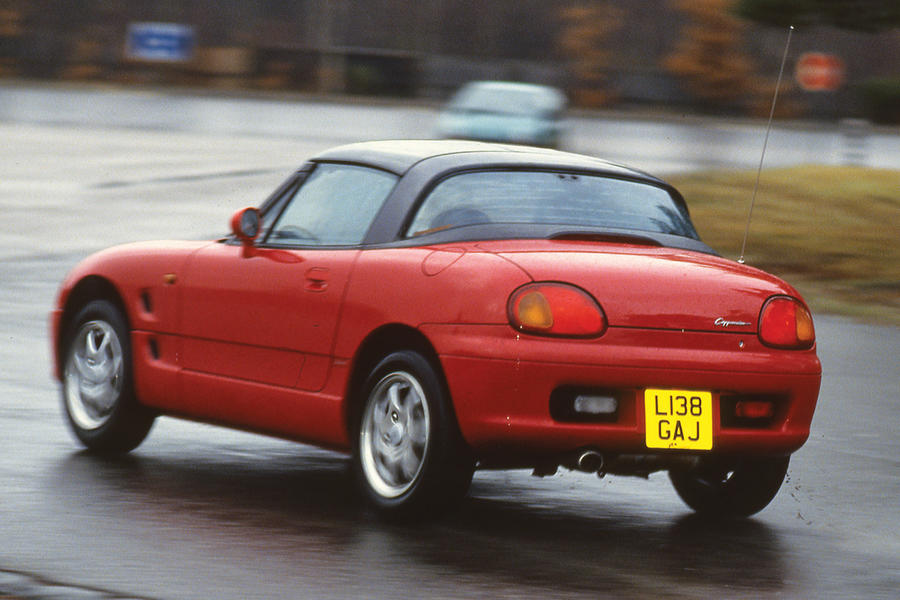 Log in or register to post comments
Capp660 29 January 2022
I have one now, the car for a summer drive with the roof in the boot.
Totally impractical but great fun and still does 50ish to the gallon.
superstevie 28 January 2022

I ran one as well as a daily driver, but I also got the usual rust. It was a mental little car, that just kept revving. Over 60mph and it was all over the place. I wish there were more cars like this around still, though. I have a smart roadster as a weekend car, and it is a blast, but nothing like it any more. Shame

What a glorious little car the Cappucino was along with the Honda Beat were a breath of fresh air, fortunately Suzuki are still making great little cars such as the Ignis & Swift but Honda in Europe seems to have lost the plot and doesn't seem to be building anything interesting at all these days