BACK TO ALL NEWS
Currently reading: Frankfurt motor show: Vauxhall Insignia VXR SuperSport
UP NEXT
Shame to Lusso you: A eulogy to the last four-seat Ferrari GT

The facelifted Vauxhall Insignia VXR SuperSport has been revealed ahead of its debut at the Frankfurt motor show next month.

With 321bhp coming from a turbocharged V6 engine and a top speed of 170mph, Vauxhall says the Insignia VXR SuperSport is the fastest car available in the UK for less than £30,000. The car can hit 60mph in 5.9sec and is mated to a six-speed manual gearbox.

The car has undergone a very light facelift since we last drove it in April, benefitting from a redesigned front bumper with what Vauxhall describes as 'sabre-tooth' detailing, as well as slight changes to the exhaust trim at the rear.

Underneath, Vauxhall has tuned the SuperSport's AWD chassis, replacing or revising around 60 per cent of components. The car's HiPerStruts, which Vauxhall says prevents geometry changes during cornering, remain on the facelifted car.

Handling and ride should both be improved over the old model thanks to modifications to the Insignia's ESP and adaptive damping systems, while noise vibration has also been reduced.

Inside, the Insignia VXR SuperSports gets a new instrument panel and centre console design to house the 8-inch touchscreen infotainment system.

Orders have already opened for the car, which costs from £29,749 for the hatchback, rising to £31,049 for the Sports Tourer model. 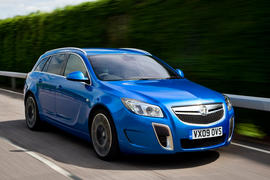 cracking looking fast estate, esp like the revised rear lights. Agree to a point with LP in Brighton above. However, if Kia/Hyundai can transform their image in less than a decade than with great looking good quality products, Vauxhall can do the same and I think "halo" models like this are an important part of that transformation.

The one thing thought that Vauxhall really needs to invest in (judging by what you read/hear) is a poor quality dealer network. I once went into the central Leeds dealer to inquire about the 195bhp Insignia SRi diesel when it had just come out. The sales guy was adamant that the car didn't exist. Until I showed it to him on his own pc on the manufacturer's website. What was interesting was that he really didn't seem to give a t**s either way....

Fair play to Vauxhall for still making cars like this.

I am really annoyed that Ford hasnt stuck a proper 6-speed manual into its most powerful Ecoboost Mondeo! That car would be a cracker!

I'm sure this is a jolly fine car, however it will be dismissed out of hand by the vast majority of potential customers because it wears a Vauxhall badge,
So why not market it as an Opel Supersport here in the UK to reflect its premium sporting intent - and perhaps a Vauxhall Supersport in Germany where the Opel badge has little kudos?
Otherwise it seems hardly worthwhile for the slow trickle of sales that this model will generate. And let's face it unless these cars are seen on the road, they won't do much to improve the company's poor brand status.