The McLaren MP4-12C wasn’t without its issues, but at half their original price used examples are tantalisingly close to affordability. Should you be tempted?
Open gallery
Close

There is no more exotic car manufacturer than McLaren, at least among those of models homologated for sale all over the world and with annual sales measurable in the thousands. McLaren doesn’t do SUVs, it doesn’t even do 2+2s. All it makes, all it has ever made, are mid-engined supercars with carbonfibre monocoques. And for almost all of us, the prospect of owning one is an impossible dream.

Or is it? Journalists have been writing ‘my first Ferrari’ stories for decades, so is the McLaren ownership ladder now descending through the clouds to within tantalisingly close proximity of touching distance? And, more importantly, should you now be stretching every sinew to reach up and grab that bottom rung?

Until recently I’d have said no. The most affordable McLarens are the first, and that means an MP4-12C, a car whose introduction was hardly smooth and which McLaren felt the need to restyle, re-engineer, rename and relaunch after just three years on sale. It came to market in 2011 without functioning navigation, with doors that many owners were unable to open and with handling that placed it well over halfway down the order during our annual quest to find Britain’s best driver’s car. 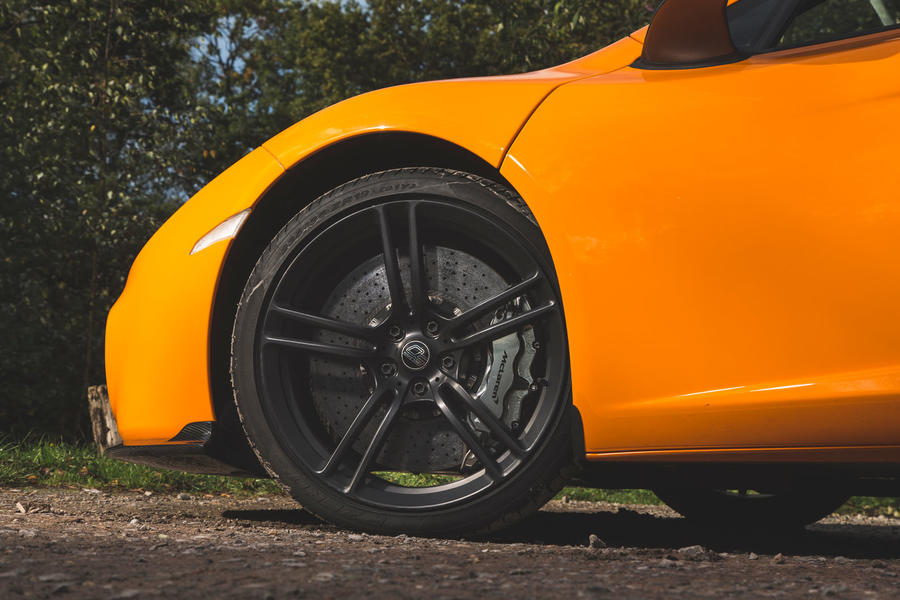 But times change and prices fall. And the truth is that a car that once cost £168,500 can be bought for half that amount today. And what’s more, it’s a hell of a lot better now than it was then. Alastair Bols, the UK’s leading independent McLaren specialist, says: “The car had a huge upgrade in 2012 which not only raised power from 592bhp to 616bhp and got the sat-nav and Bluetooth working, but it was also fitted free of charge for customers with earlier cars. So unless a car has been hiding in a shed ever since, it will have had the upgrade.”

So what we’re talking about now is owning an upgraded, carbonfibre McLaren for prices starting around £85,000, the price of a mid-range Lotus Evora. Sounds tempting of course, but should you yield to it? 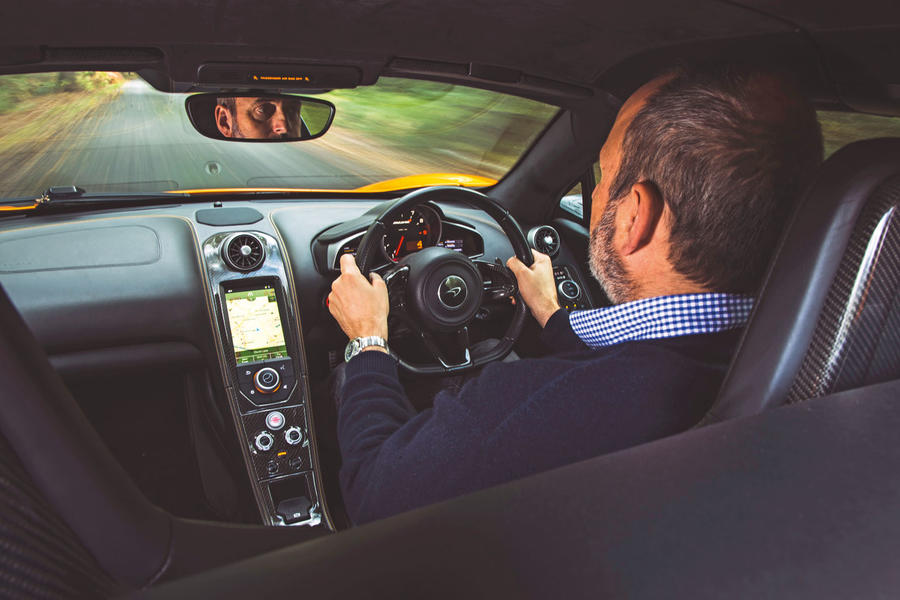 The car I’m driving is McLaren’s own volcano orange 12C Spider, and because it is perfect and has very few miles on its clock, you absolutely could not buy it for a five figure sum. But in the way it drives it is entirely representative of the way any healthy 12C should drive: even that roof makes close to zero difference because even in the coupé it is not part of the structure of the car.

Can you feel the years that have passed? Broadly speaking, yes, but this is not an exclusively bad thing. The looks for instance, criticised when new for being dull and like those of a Korean concept car, have weathered startlingly well. To my eyes it no longer looks plain, just subtle – Volcano Orange paint aside – and I expect its shape will have a more timeless property than many of the more dramatically styled super and hypercars that have come to market since. 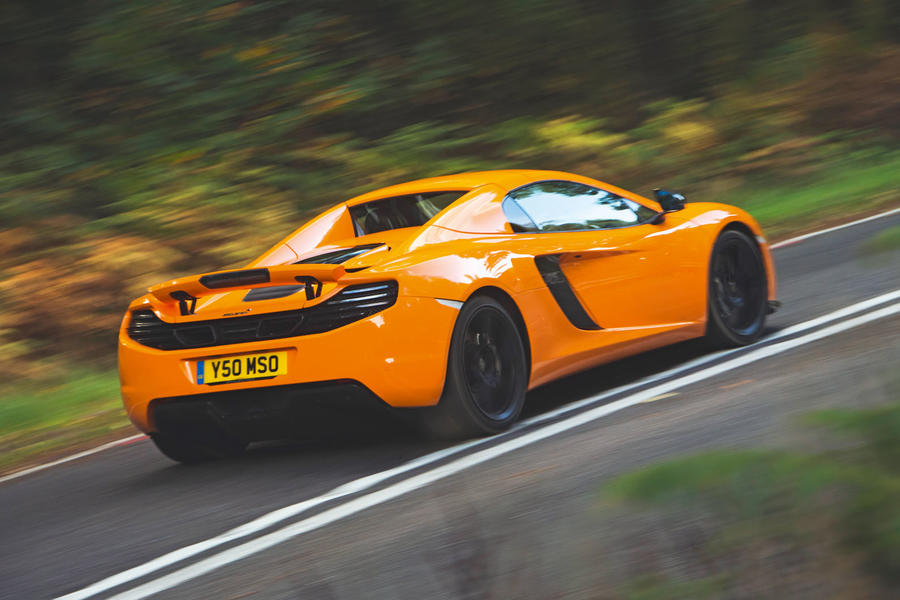 The interior still has a sense of occasion. I actually quite like the big analogue rev counter and the ventilation controls on the inside of the door, while McLaren’s policy of first designing a car its driver can see out of clearly is as much in evidence here as it is in any later car. The navigation is rubbish, but probably not much less so than that of a Ferrari from this era. Press the button, fire her up and let’s see what she’ll do.

The family relationship is clear from the start. The car’s basic stance, visibility, control weights, driving position and ergonomics speak of a philosophy that’s as clear here as it is in a brand new 720S. Because of this, if you’re lucky enough to be reasonably up to speed with modern McLarens, the 12C is much more familiar than you might expect. 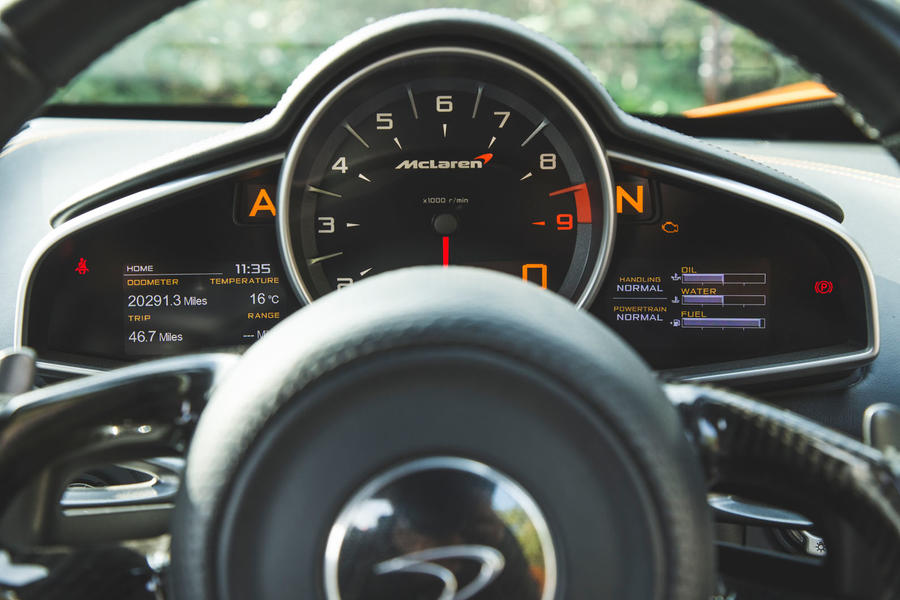 But all the details are different. The engine has the same capacity, configuration and, post-upgrade, the same power as the latest 600LT, but it sounds more anodyne than a 570S and the response is not the same. There’s more lag, and while in a new McLaren you restrict the use of the drivetrain’s Track mode for exactly that environment, if I had a 12C it’s the setting I’d always leave it in. Over the past few years these sorts of cars have just got a lot sharper in the way they respond to the driver’s foot.

Then again, no McLaren made today rides as well as this. It’s true that the 12C had a bit of a reputation for offering up a rather remote driving experience, but today it’s the limo-like comfort that hits you sooner and harder. If there is a more comfortable supercar out there, I’ve not driven it. I don’t quibble with McLaren’s decision to firm things up in later models because a McLaren must be a driver’s car first, second and third, but nor am I blind to the inevitable sacrifices of such a move. 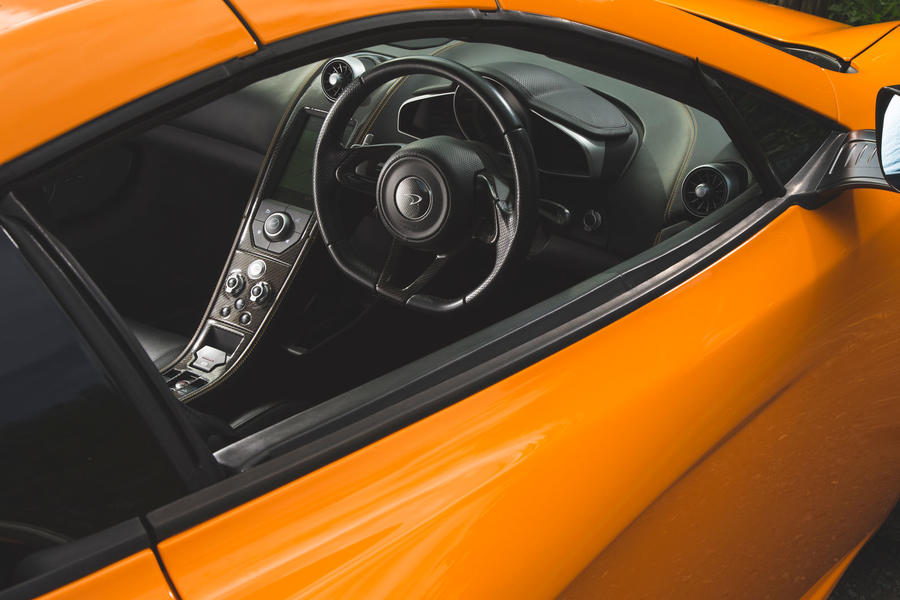 As for that driving experience, it’s a lovely thing to thread through the lanes. It’s as rapid as you could want and as grippy, too. The brakes are exemplary. And yet this is where you can see where most progress has been made, and it’s not just in the throttle response. First, a modern McLaren – even a less powerful 570S – feels quite a lot quicker. Today’s Macs have a hurtling capacity that is either amusing or alarming depending on how sensible you are about its deployment; the 12C can’t do this so never feels more than just bloody fast. The gearchange is rather casual, too: the shift itself is still quite quick but the bits either side from issue of instruction to reapplication of power are noticeable, whereas today they are, in effect, absent.

As for the handling, well, I wasn’t about to go flinging around one of McLaren’s own heritage cars, but I drove it hard and fast enough to love the weighting and gearing of the steering itself, yet still found the car harder to place than I’d have liked. It’s a sensation I remember from the car when it was new and it is probably in this area – that of pure, subjective driver interaction – that McLarens of today feel most changed. 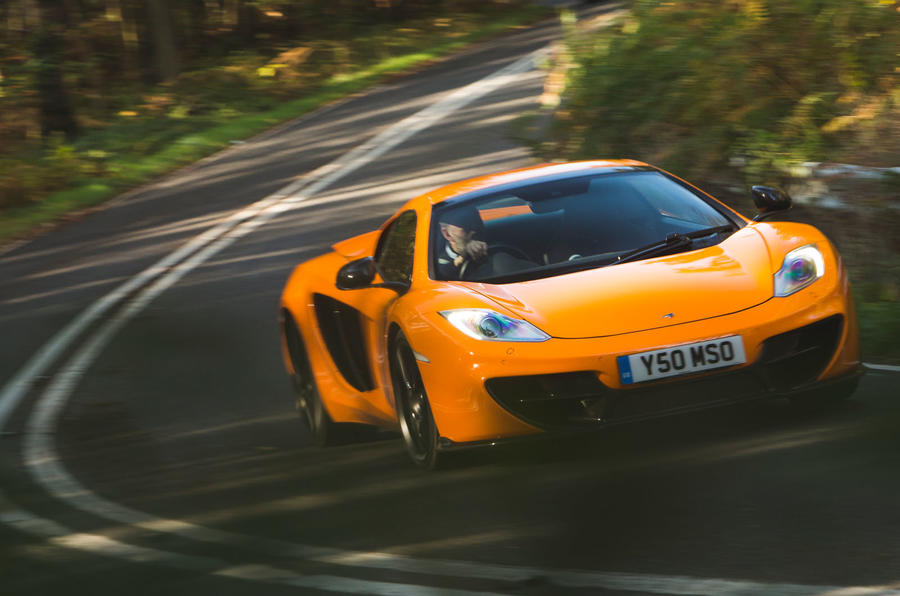 But they cost twice as much as this once you’ve added a few essentials from the options list, and this is where the 12C becomes really interesting. Because for a five-figure sum it is a mightily tempting proposition – I might even go as far to say a bargain, and it’s not often that particular word has been used to describe a McLaren.

In terms of the driving experience on offer, it is probably 80% of a 570S for 50% of the money. And while it’s probably only 60% as exciting as the 720S to which it should be more properly compared, it’s not much more than one third of the price of a well-specced example.

And remember the impressions above are relative to other McLarens: its performance and handling relative to almost any normal high-performance car remain pretty amazing, even today. 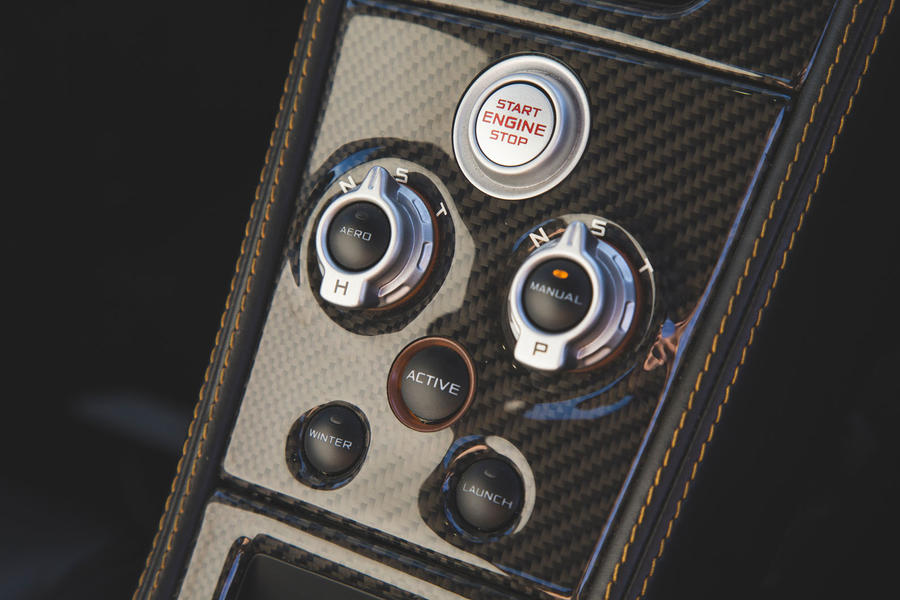 I’m not saying that when the history of McLaren is written that the 12C will be remembered as one of the greats, but it is nonetheless a car with enormous appeal, and right now, for the very first time, it does represent strong value for money. Your first McLaren may be closer than you think.

Do they break down all the time?

“I must have done more than 50,000 miles in 12Cs,” says marque specialist Alastair Bols, “and I’ve not broken down yet. The most common ‘faults’ are warning lights appearing on the dash, which can frighten the life out of you. My advice is to keep calm. If you just park up, get out, lock the car and leave it for three minutes, at least nine times out of 10 that will cure it.”

Bols says there have been issues with gearbox seals but thinks those that were going to go wrong would have done so by now. If it happens it’s £15k or more for a new ’box, although there has been talk that it may soon be possible to repair them rather than replace, and that will bring the price way down. 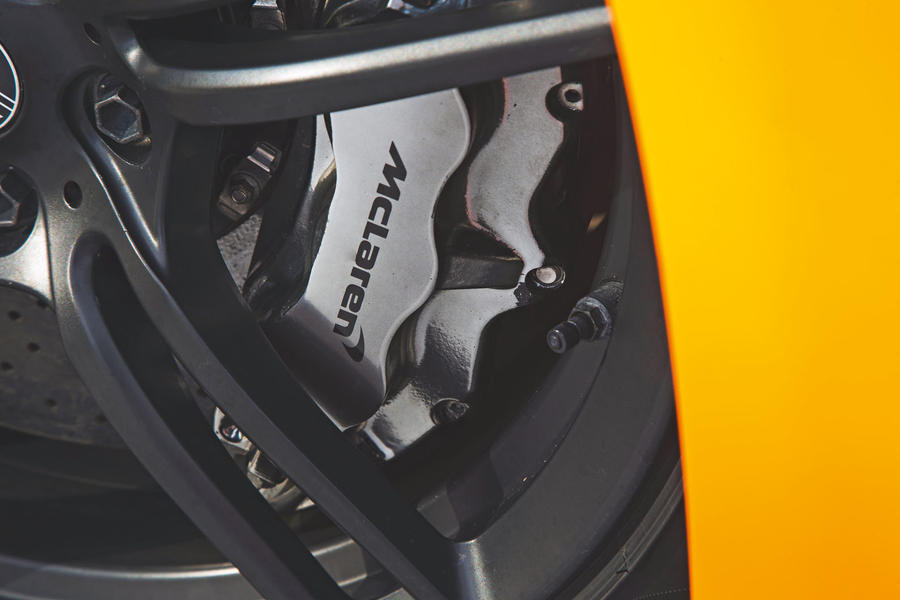 Bols is adamant the 12C’s super-sophisticated interconnected hydraulic suspension is fundamentally sound and that the worst that’s likely to happen is that an accumulator will give up. “But as it only cost £1800 to replace the lot, I tend to regard that as maintenance.”

Even so, beware the cost of extended warranties – this is a bespoke car with almost no proprietary parts available, so they are priced accordingly. There are no independent service agents at present so all cars will be main dealer-maintained, and one missed stamp or a slightly long gap between services shouldn’t be considered the end of the world.

This article was first published on 15 December 2018. We're revisiting some of Autocar's most popular features to provide entertaining content during these difficult times.

I bought my 2011 12c pre-owned and it was fantastic, as was dealer support. Highly recommended, minor issues only - fixed free. You can tool around in traffic or for a Sunday cruise or have trackday fun. Couldn't believe that teh power and systems upgrade was free, but it was!! Porsche note!! Only sold when the silly channel stuffing wholesale volumes and consequent low lease rates availabe on 570's tanked the residual. Great value now.

Not quite sure I understand this article. It's about an affordable price car - fine. And the author mentions Journalists My First Ferrari stories. What, their first owned Ferrari or fist driven Ferrari?

And then the article goes and tests a car which is not one of those in the affordable bracket - it's a car from their historic collection. And then it's the salesman who points out all the potential pitfalls.

The article just makes me wonder if a motoring hack has ever bought a car with their own money? If not then what right have they to say what's affordable? And as for listing potential problems - well you might as well as the Children Catcher from Chitty Chitty Bang Bang about parenting. As if a salesman is going to tell you the pitfalls of buying his product. I must have driven 50,000 miles in 12C's and I've not broken down yet. Yeh, that's because all the cars he's driven have been new and like the author, he'll never have or likely to have owned one in his life.

The reason for this

can be ascertained by watching JayEmm on cars.